This study investigated the insecticidal effects of ethanolic oil extract of Plumbago zeylanica against Plodia interpunctella infestation in stored maize grains. Oils from the plant were administered at 5, 10, 15, 20 and 25% concentrations to maize grains inside plastic containers. The treated samples were air-dried for 3 h. The three developmental stages of the moth (egg, larval and adult) were separately introduced into the treated samples, using aspirator. Mortalities were assessed at 24, 48, 72 and 9 6 h post-treatment periods as contact and as fumigant insecticides. The rates at/from 15-25% inhibited egg to hatch and adult emergence as contact and as fumigant insecticides. At 20 to 25% rates, 81 to 100% larval mortalities were achieved within 72 to 96 h post infestation periods as contact and fumigant insecticides. At 20 to 25% application rates of oil extracts as contact and fumigant, the treatments achieved 89 to 100% adult moth mortality within 72 to 96 h post infestation periods. The GC-MS analysis of the ethanolic oil extract shows that P. zeylanica has some bioactive compounds that could be co-opted into integrated management of P. interpunctella infesting stored products.
Key words: Plumbago zeylanica, Plodia interpunctella, hatchability, contact and fumigant.

Damages to stored grains and their products by insects had been estimated as 5-10% in the temperate countries and 20-30% in the tropical zones (Nakakita, 1998). Grain storage all over the world had been relying so heavily on the use of synthetic pesticides, which of course have played a major role in food storage and protection and have tremendously benefited mankind in the past; but irrespective of these great contributions, their continuous use have triggered a number of ecological, resistance and health-related challenges (Varma and Dubey, 1999); such as the development of  resistant  pests,  resurgence and outbreak of new pests, toxicity to non-target organisms and hazardous effects on the environment, thus endangering the sustainability of the ecosystem (Jeyasankar and Jesudasan, 2001).
It has been reported that over 2.5 million types of such pesticides are used in the agricultural crop protection annually across the globe and that over $100 billion was spent (annually) to  manage the side effects of these pesticides on man and environments (USEPA, 2011). These have necessitated the search for eco-friendly and bio-degradable  pesticides  for  crop  protection   and management. This drive had been greatly encouraged over the last few decades (Prasad et al., 2013). It is expected that the ideal insecticide should control the target pest adequately, rapidly degradable and non-toxic to human and livestock (USEPA, 2011). The use of plant-derived pesticides to make up for various shortfalls identified with synthetic pesticides had been promising over years (Parugrug and Roxas, 2008). There have been reviews on the use of plants’ secondary metabolites to control the menace of pests’ infestation on stored grains by several authors (Obeng-Ofori, 2007; Tan and Luo, 2011). This study is therefore sought to assess the bioactivity of the oil extract of Plumbago zeylanica against the egg, larval and adult stages of the Indian meal moth, Plodia interpunctella. 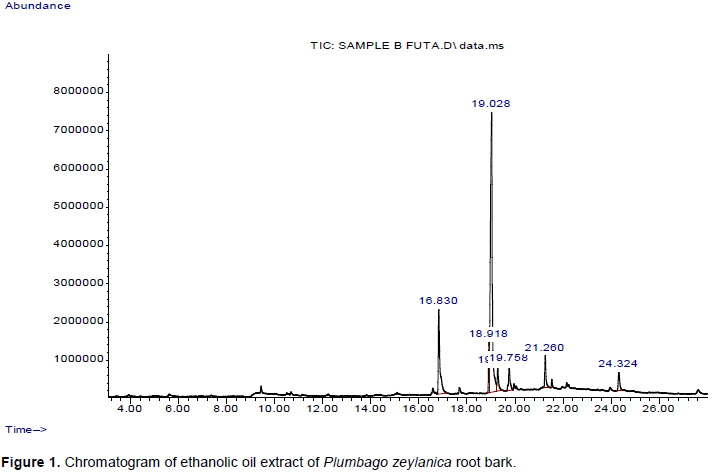 Food security for the increasing world population, most especially in the countries where pest control management is not of major concern  had  been  and  still  being significantly challenged over the years (Olotuah, 2014). This calls for effective grain storage and safe pest management methodologies. Grain storage across the globe had been relying so heavily on the use of synthetic pesticides against insect infestation, the use of which has triggered a number of ecological, health-related and pest resistance problems (Varma and Derbey, 1999). Works on organic pesticides to overcome the challenges associated with synthetic pesticides had been yielding positive results.  Several  botanical  products  have  been discovered as potent, in the control of storage pest infestation (Ofuya and Dawodu, 2002; Adedire and Ajayi, 2003; Tan and Luo, 2011). Akinyemi et al. (2005) also reported on the effectiveness of the use of plant extracts in the management of stored products insects and described the approach as an ancient practice. The result of this study shows that the oil extracts of various compositions from P. zeylanica is toxic to egg, larval and adult stages of P. interpunctella in stored products, most especially maize grains.  This  is  in  agreement  with  the  findings of Akinneye et al. (2006) that revealed the efficacy of root bark, stem bark and leaf powders of Cleithopholis patens at varied compositions both as contact and fumigant insecticides in the control of egg and adult emergence stages of some Coleopteran and Lepidopteran storage pests. This result showed a significant contact effect as compared with the fumigant effects of the oil extracts on the pest. A concentration of 15% of the ethanolic oil extract achieved 0% egg hatchability, which is significantly different (P Ë‚ 0.05) from the result obtained under fumigant control. The hatchability was not completely prevented until the concentration was increased to 20%. 100% larval and adult mortalities were achieved at concentration 20% after 96 hours exposures when used as contact insecticides. The concentration had to be increased by 25% before the same result could be achieved under the fumigant methodology. The inability of the eggs to hatch may be because such botanicals have a way of inhibiting gaseous exchange between the eggs and their external environment (Akinneye, 2003). The relatively high mortality rate recorded as a result of the use of P. zeylanica to the pest may be attributed to the chemical composition of the plant, just as reported by Ketunku et al. (2013) that Saponin found in E. aromatica affected the respiratory system of certain storage insects thereby prevented their spread. It may also be attributed to the odour or characteristic bitterness associated with the root bark of the plant. This corroborates the findings of Lale and Abdurahman (1990) that mortality of storage insects could be associated with the pungent odour produced by plant powders against them. The finding is also in line with the report of Akinneye (2003) that C. paten inhibits egg hatchability and development of adult stages of Ephestia cautella. Ashamo and Ogungbite (2014) also discovered that E. aromatica prevented the emergence of some adult storage moths even at a concentration 2%. This result is also in agreement with the work of Adedire and Lajide (2001); and Longe (2004) that E. aromatica powder has significant contact and fumigant actions on Calosobruchus maculatus. The progressive reduction in percentage adult emergence with increasing concentration and exposure period could suggest the death of the pests at larval stage due to their inability to fully cast off their exoskeleton which remains a link to the posterior parts of their abdomen just as reported by Oigiangbe et al. (2010). Furthermore, the larvicidal activities obtained in this study are also in agreement with the reports of Sosan et al. (2001) that larvicidal activities of essential oils of Ocinum gratissium, Cymbopogon citratus and  Ageratum conyzoides against Aedes aegypti, achieving 100% mortality at concentrations of 120, 200, and 300 ppm respectively. Das et al. (2007) reported that the LC90 values of methanol and ethanol extract from Aristolochia saccata roots, Annona squamosa leaves and Gymnopetelus cochinnensis fruits’ pericarp     against     Aedes     albopictus     and    Curlex quinquefasciatus larvae ranged from 31.80-155 ppm. The potency of the ethanolic oil extract of P. zeylinica against the different stages of P. interpuntella can be attributed to the abundance of esters/fatty acids in its biochemical breakdown. The potency of botanical fatty acids have been extensively research for more than three decades (Su, 1976; Su et al., 1972; Messina and Renwick 1983; Abdallah et al., 1986) reported the insecticides potency against weevil species.

This study revealed the positive contact and fumigant effects of P. zeylanica oil extract on the P. interpunctella across the concentration gradient and exposure period. It was more effective when used as contact compared with fumigant control. The findings suggest that the botanical product could serve as an alternative to synthetic chemicals being used against P. interpunctella infestation.