Drought, desertification and the Nigerian environment: A review 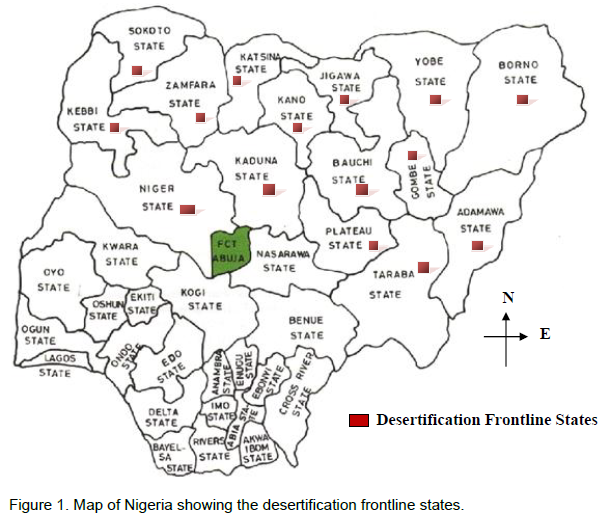 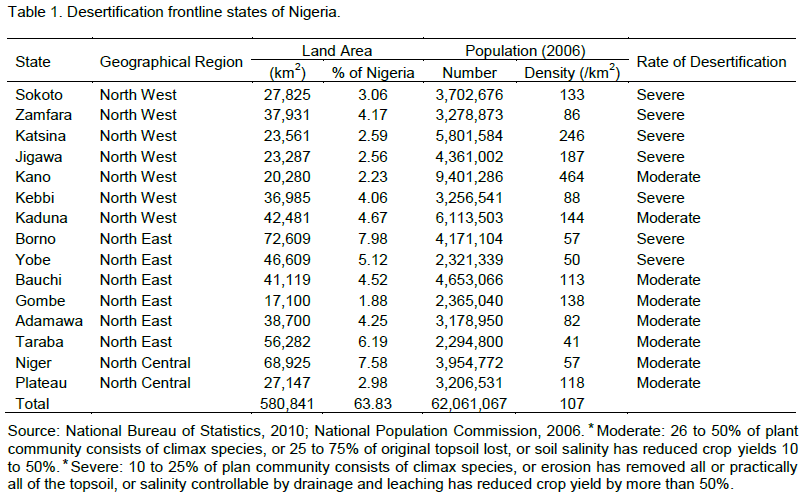 CAUSES OF DROUGHT AND DESERTIFICATION

EFFORTS BY THE NIGERIAN GOVERNMENT TO COMBAT DESERTIFICATION

The Nigeria Government has been making efforts aimed to combating environmental problems of drought and desertification. These efforts include national policies, legislative framework, sectoral programmes and partnership with local and international organizations that is saddled with fighting desertification. Nigeria has developed many policies and programmes, received partnership in form of finance, technical assistance, loans and capacity building from partners such as World Bank, IAEA, IFAD, CIDA, UNDP, UNIDO, China Government, Japan international Agency (JICA), Agricultural Development Company Limited, Israel and the UNEP/GEF. The directive of the emirate of the Northern Nigeria by the Anglo-French Commission in 1937 to embark on tree planting to stop desert encroach in the region was probably the foremost desertification combating effort in the country. In 1977, in other to examine the problem of desertification and check desert encroachment in the arid zone of Nigeria, Federal Government set up the Arid Zone Aforestation Project. This project launched tree planting campaigns and forestry projects to check deforestation. Tree seedlings were produced and distributed which led to the establishment of Shelter Belts along the Northern borders of the country. During the administration of Major General Muhammadu Buhari in 1984, Tree Planting Campaigns was used as an instrument to enlighten and motivate people on the negative effects of desertification and the need to combat it (Jibunor, 2014). Federal Environmental Protection Agency (FEPA) was established in 1988 under Decree 58 after the Nigerian government had signed the United Nations Conference on Environment and Development (UNCED), an important step towards addressing desert encroachment in the country. States Environmental Protection Agencies (SEPA) were thereafter established in the 36 states including the Federal Capital with mandate to address environmental problems which include desertification (Medugu, 2009).
Nigeria signed the Desertification Convention on the 31st October, 1994, and ratified same on the 8th July, 1997 thereby qualifying the country as a party to the convention with effect from October, 1997. The creation of the Department of Drought and Desertification Amelioration in 1999 in the Federal Ministry of Environment was to strengthen the existing institutional arrangement for more effective coordination of activities of Nigeria Government towards the implementation of the CCD. National Action Plan (NAP) of Nigeria which is part of the National Economic and Social Development and Environmental Protection Plan was developed. NAP compiled strategies and submitted it to the Secretariat of the UNCCD Bonn, Germany, which are to help in environmental education and management, public awareness, poverty alleviation and provision of alternative sources of energy among others. These strategic policies include, National Policy on Environment, National Agricultural Policy, National Energy Policy, National Environmental Action Plan (NEAP) and State Environmental Action Plans (SEAPs), National Tropical Forestry Action Plan, National Conservation Strategy, Natural Resources Conservation Action Plan, National Water Resources Master Plan (1995 to 2020), National Biodiversity Strategy and Action Plan, The Green Agenda of the VISION 2010 Report, National AGENDA 21, National Action Programme to Combat Desertification, National Economic Empowerment and Development Strategy (NEEDS) and National Policy on Women.
In 2005, former president, Chief Olusegun Obasanjo initiated a Global Tree Planting Project to halt desert encroachment in 46 local government areas in the country’s desertification frontline states. The programme was expected to generate economic activities for the citizens of the states involved and urge them to desist from felling but rather plant trees. Several of such projects was also initiated in some of these states such as the ?5.2 million project of Gidauniyar Jihar Kastina in Katsina State, Sure-P Programme in Sokoto State for 5 km tree planting in each local government of the state and collaborative programme of Jigawa State and the United State to harness the potential of Gum Arabic to fight desert encroachment and reduce poverty in the state (Haruna and Bukar, 2010). Legislative framework was also enforced to encourage the execution of these projects in Nigeria. Despite these efforts by the Nigeria Government, significant success in remedy desertification in the country is yet to be achieved due to the following factors:
Poverty
The fragile semi-arid land of Northern Nigeria is unyielding to the efforts to reclaim it from desertification, due to the threat pose by the growing poor population in the area. The local people meet their needs from the natural environment by burning the scanty bush area for game, deforest for firewood, and their livestock overgraze the available vegetation. The 2010 poverty survey by the National Population Commission showed that the North-west and Northeast geo-political zones, which are desertification frontline states, had the highest poverty rates in the country with 77.7 and 76.3%, respectively, relative to the national rate of 69.1%. The poverty condition will continue to impede the government reclamation efforts if holistic approach is not put in place to alleviate poverty in the country.
Communal resource use
Unregulated access to land resources that are communally owned may lead many individuals to maximize their own gain by over exploiting the land resources. Since no one is accountable to such land, its open access caused common rearing of animals and farming, such that the carrying capacity of land is exceeded and desertification results.
Lack of political will, institutional weakness and corruption
This is a major impediment to combat desertification in Nigeria. Institution role in establishment and enforcement of policies and law is significant in environmental management. Laws in Nigeria is more against poor people or people of no political influence, hence, people of influence engaged in unsustainable environmental practices majorly deforestation, without any conse-quence. Even with the contribution of donor agencies in combating desertification in Nigeria, political office holders sees investing money in fighting desertification as waste of resource and divert it partly or wholly to another sector of the economy. Corruption from the side of the desertification policy implementation partners and institutions also militate against effective policy implementation.

REMEDIES TO DROUGHT AND DESERTIFICATION

Solution to the problem of desertification must target all aspects that relate to the problem. Though some desert conditions are irreversible even if all anthropogenic causes are stopped now, but some are reversible. Some of the remedies to desertification include:
Awareness
Raising awareness of desertification at local, national and global level is key to remedying drought and desertification. It is probably the cheapest means in combating desertification because it serves as a preventive measure. Awareness will provide people with the understanding of the causes and consequences of the phenomena so as to stop all possible causes and encourage actions that would remedy some of the consequences and prevent further degradation of soil.
Protection of marginal lands
Due to the incapability of marginal lands to support permanent or intensive agriculture, there is need for proper evaluation of such lands with government policy and enforcement aimed at protecting them from any activities that is capable of denuding its vegetation cover.
Planting and protection of indigenous tree and shrub species
Increasing the area of conspicuous vegetation into desertifying lands is vital in managing desertification. This could be done through intensive and technologically supportive reclamation, by planting and establishing indigenous trees and vegetation known to the area. Planting of trees coupled with avoided felling should be embraced in arid and semi-arid zones until if possible a forest zone is attained (Mumoki, 2006). Planting of tress helps in:
i. Soil stability
ii. Protection of soil from erosion
iii. Retention of soil moisture and nutrients
iv. Carbon sequestration
Sustainable agricultural practices
Agroforestry is a form of farming system that plays an extremely important role in the land management of semi-arid and arid zones. Agroforestry is a land use management system in which trees or shrubs are grown around or among crops or pastureland. It combines agricultural and forestry techniques to create more diverse, productive, profitable, healthy, and sustainable land-use system. Grazing systems should be improved from denuding the natural rangelands whose consumption will lead to aridity condition hence establishment of new pastures for grazing by livestock should be ensured. All water to be used for irrigation should be examined to be devoid of level of salt that could result in salt accumulation, as well as ensuring a good drainage system (Sultana, 2008).
Use of alternative source of energy
Feeling of the few trees and shrubs in desert-prone areas for fuel wood can be reduced through the development of sustainable alternative energy sources such as biofuel. This will not only conserve forest resources but will reduce environmental pollution.