Flora of Vallikkaattu Kaavu, a sacred grove of Kozhikode District, Kerala, India with their botanical name, family, conservation status, endemic status, medicinal status and habit has been presented in detail. This sacred grove associated with the Sree Vana Durga Bhagavathi Temple located 20 km north of Kozhikode at Edakkara in Thalakkalathur Panchayat, is the largest sacred grove in Kozhikode District with an extent of 6.5 ha. Floristic studies of this sacred grove recorded 245 flowering species belonging to 209 genera and 77 families. Among the 245 species, 75 are herbs, 71 are trees, 55 are shrubs and 44 are climbers. Out of the 245, 44 are endemics - 16 endemic to Southern Western Ghats, 3 endemic to Southern Western Ghats (Kerala), 13 endemic to Western Ghats, 9 endemic to Peninsular, India, 2 endemic to India and 1 endemic to South India (Kerala).  Thirty four threatened plants were reported, out of which 3 are Critically Endangered, 5 are Endangered, 4 are Near Threatened, 1 is at Low Risk and Near Threatened, 16 are Vulnerable and 3 are with Data-Deficient status. Species with Not Evaluated status and Least Concern status were also listed. Endemic plants like Sonerila rheedei, Litsea ghatica, Lagenandra meeboldii and Ischaemum tumidum var. calicutensis, threatened and endemic plants like Anaphyllum wightii and Kunstleria keralensis and Acorus calamus with endangered status were recorded. Myristica swamps having dense prominent stilt and breathing roots represented mainly by Gymnacranthera farquhariana and the endemic and threatened species, Myristica fatua var. magnifica and M. malabarica were also recorded from this sacred grove. Out of the 245 species listed, 236 are medicinal, constituting 96% of the total flowering plants reported from this sacred grove.

Sacred groves are considered a reservoir of biodiversity, gene pool and treasure house of many endemic, endangered and economically important plants used in Ayurveda, tribal and folk medicines and their importance in conserving biodiversity has been well recognized. The sacred groves blessed with many native plants comprise of patches of forests or natural vegetation ranging from few trees to forests which have been conserved by local people time immemorial dedicating them to local deities. They do play significant role in soil and water conservation and nutrient cycling in the terrestrial ecosystem. In India, they are reported from the Himalayas, North-east India, highlands of Bihar, Orissa, Madhya Pradesh, Andhra Pradesh, Karnataka, Tamil Nadu and Kerala. In Kerala, they are known variously as “Kaavu”, “Sarppakkaavu”, “Pambinkaavu” or “Nagakkaavu” which are dedicated to gods/goddesses or to certain ancestral/natural spirits. The sacred groves in general, act as nursery and storehouse of many local Ayurveda, tribal and folk medicines (Bhakat and Pandit, 2003). Extensive studies have been done on the floristic diversity of sacred groves of the Western Ghats and Kerala State during the past three decades (Gadgil and Vartak, 1975, 1976, 1981; Unnikrishnan, 1995; Chandran and Gadgil, 1993a,b; Chandran et al., 1998; Nambeesan, 1999; Induchoodan, 1992, 1996; Pushpangadan et al., 1998; Unni and Anupama, 2004; Anupama, 2009; Sreeja and Unni, 2010a; Sreeja, 2008, 2013). Many sacred groves of Kozhikode District have been reported as storehouse of valuable medicinal plants used in Ayurveda, tribal and folk medicines (Sreeja and Unni, 2010b, 2011). Studies show that some sacred groves of Kakkodi Panchayat in the Kozhikode district (Kerala) have undergone drastic degradation due to human interventions (Sreeja et al., 2010). Sacred groves being rich in a variety of medicinal plants, their conservation warrants extensive floristic studies and implementation of immediate measures for conservation, failing which many threatened medicinal plants might be lost forever.

Studies on sacred groves of Kerala shows there are 761 sacred groves rich in biodiversity with a floristic wealth of over 722 species belonging to 217 families and 474 genera (Balasubramanyan and Induchoodan, 1996). Even the smallest groves harbour some old and magnificent specimens of trees and climbers (Induchoodan, 1992, 1996; Chandrasekara and Sankar, 1998a, b; Anupama, 2009). Studies done by the Centre for Water Resources Development and Management (CWRDM), Kozhikode, Kerala (2007) showed the floral diversity of 577 sacred groves of Kerala with 737 plants out of which 609 are Dicotyledons, 122 are monocotyledons, 4 are Pteridophytes, and 2 are Gymnosperms. A very interesting constituent of sacred groves of Malabar is the typical Myristica swamps found in evergreen swampy groves of Kozhikode, Kannur and Kasaragod. Sacred groves of Kerala have distinct tiers of trees, shrubs, herbs, climbers, stranglers, epiphytes, parasites, and wild relatives of many cultivated plants (Rajendraprasad, 1995). The vegetation of sacred groves has been broadly classified into two types viz., evergreen and moist deciduous (Basha, 1998). A new species of the leguminous climber Kunstleria keralensis has been reported from one of the sacred groves of Kerala (Mohanan and Nair, 1981). Chandrasekara and Sankar (1998 a, b) recorded 73 species from three sacred groves of Kerala of which 13 are endemic to Southern Western Ghats, 3 are endemic to Western Ghats and 1 is endemic to Peninsular India. Induchoodan (1996) identified 364 important sacred groves in Kerala with a floristic wealth of 722 species. Pushpagadan et al. (1998) reported that the biological spectrum of sacred groves of Kerala closely resembles that of tropical forest biodiversity. A rare species of cinnamon, Cinnamomum quilonensis have been reported from the sacred groves of Alappuzha in Kerala (Mohanan and Nair, 1981). Twenty five threatened plants have been recorded from coastal sacred groves of Thrissur (Sujana et al., 2006). A study undertaken on the floristic composition, vegetation dynamics, ecology as well as the rituals in 173 sacred groves of 13 districts of Kerala by the Jawaharlal Nehru Tropical Botanic Garden and Research Institute (JNTBGRI), Thiruvananthapuram reported the presence of 411 species of angiosperms belonging to 276 genera and 92 families, out of which 57 were endemic to Kerala/Western Ghats including five endangered species viz., Vateria macrocarpa, Phaeanthus malabaricus, Rauvolfia micrantha, R. serpentina and Taprobanea spathulata.

Anupama (2009) studied the ecology of 7 select sacred groves of Malabar viz., Kammadathu Kaavu (Kasaragod), Parappool Kaavu, Poongottu Kaavu and Thazhekkaavu (Kannur) and Bhayan kaavu, Poyil Kaavu and Thurayil Kaavu (Kozhikode) with emphasis on major physicochemical aspects of their soils and floral diversity with special reference to angiosperms. A total of 171 plants have been recorded consisting of 10 Monocotyledons, 159 Dicotyledons and 2 Gymnosperms. Reports on floral diversity of six sacred groves of Kakkodi Panchayat of Kozhikode District (Sreeja, 2008; Sreeja et al. 2010) reported the presence of 131 species of plants belonging to 118 genera and 60 families, out of which 127 were Angiosperms, 2 were Gymnosperms and 2 were Pteridophytes.

This study was done in Vallikkaattu Kaavu of Kozhikode District (11°08’ and 11°50’ N latitude; 75°30’ and 76° 08’ E longitude) located on the southwest coast of India with a humid tropical climate, mean annual rainfall of 3266 mm and temperature range of 22 to 36°C. History and details of this sacred grove was collected through field visits, personal interview with members of the Temple Trust and confirmed scrutinizing the temple records. Plants were collected seasonally based on their flowering season, herbaria prepared following the wet method of Fosberg and Sachet (1965) and identified with the help of Flora of the Presidency of Madras by Gamble and Fischer (1915-1936) and other Floras, Manuals, Revisions, etc. and confirmed by matching with the Herbaria of University of Calicut (CALI), Foundation for Revitalization of Local Health Traditions(FRLH), Bangalore and Jawaharlal Nehru Tropical Botanic Garden and Research Institute (TBGT), Thiruvananthapuram, Kerala and The Madras Herbarium (MH) of the Botanical Survey of India, Coimbatore. Medicinal uses of these plants were collected through personal interviews with local medical practitioners and renowned Ayurveda physicians of Kottakkal Arya Vaidya Sala, Malappuram, Kerala and confirmed with the authentic book by Udayan and Balachandran (2009), authentic websites and journals. Present conservation and endemic status of plants was listed referring to authentic publications and web sites (Sasidharan, 2004, 2006, 2011; FRLHT, 2004; IUCN, 2012).

Vallikkaattu Kaavu, associated with the Sree Vana Durga Bhagavathi Temple, located 20 km north of Kozhikode at Edakkara in Thalakkalathur Panchayat of Kozhikode District is the largest sacred grove in Kozhikode District with an area of 6.5 ha. Major portion of this sacred grove is a hillock and a perennial stream flowing through it drains into a pond closer to it. The Kaavu and the temple which were owned earlier by three Hindu families and the H. R and C. E. Department, Government of Kerala took over its control in1948 and is being administered by a Board of Trustees consisting of five members - two members from the hereditary families and three from the Department, which meets once a month and takes decisions on matters related to the temple administration. Main deity of the temple is Sree Durga Bhagavathi and the sub-deities are Ganapathi, Ayyappan, Bhadrakaali and Sree Vettakkorumakan. The daily Poojas are Malar Nivedyam and Nivedya Pooja. Thrikaala Pooja is performed as offerings which is done during the Vaisakha (May) and Karkkidaka (July-August) months, Navaraathri (October) days and the period Mandala (November-December). The main Vazhipaadus (offerings) are Raktha Pushpaanjali, Pushpaanjali, Thrimadhuram, Muttarukkal, SharkkaraPaayasam, Maala, Ennavilakku and Neyvilakku. KudukkaChoru is an important Vazhipaadu done for being blessed with progeny. 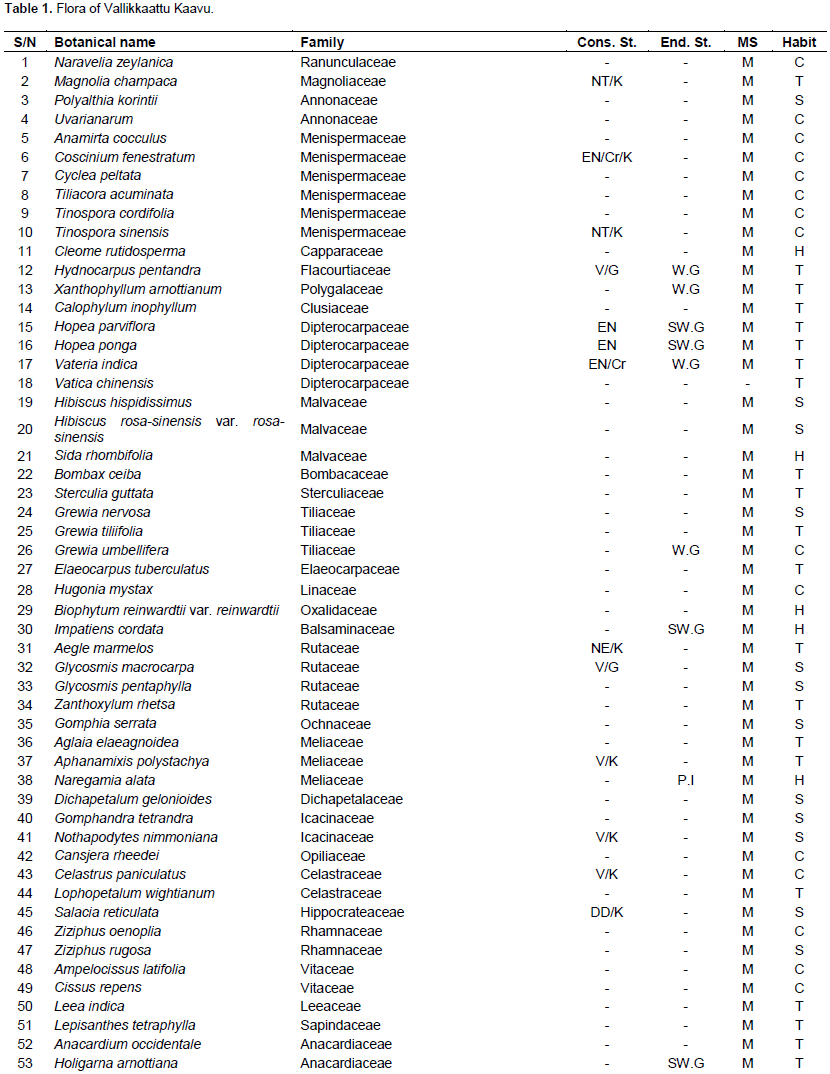 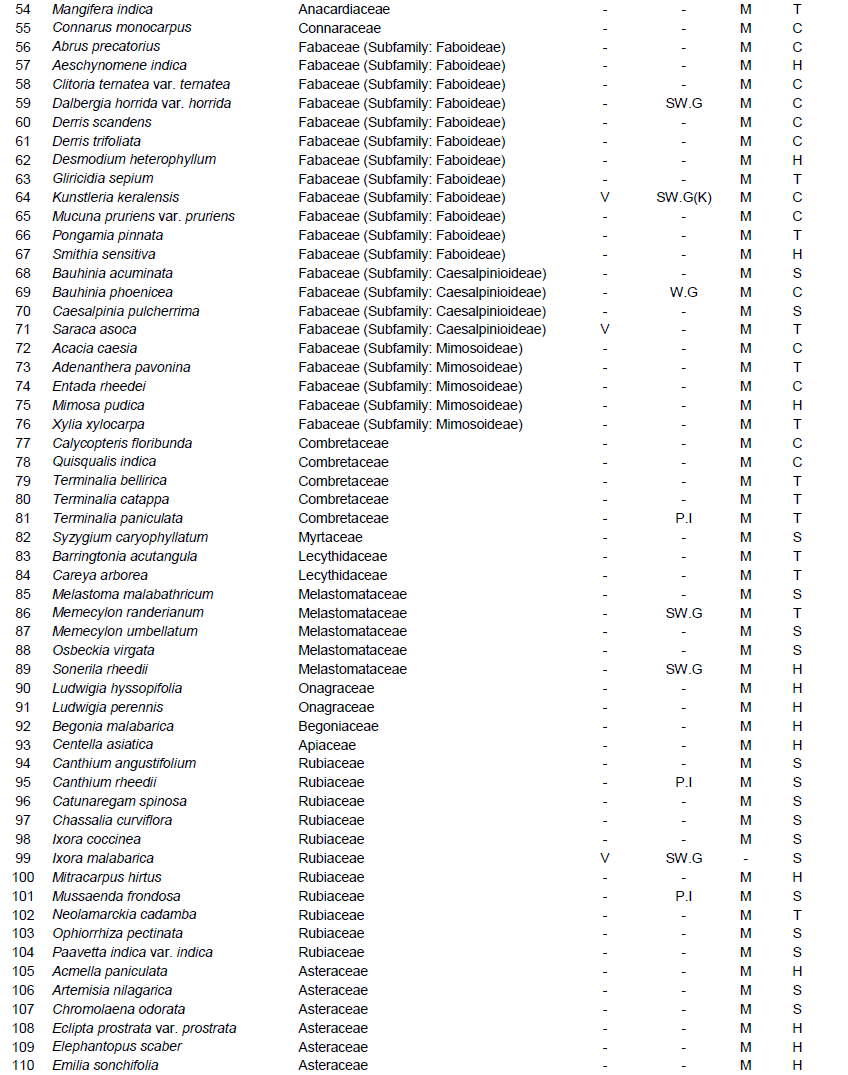 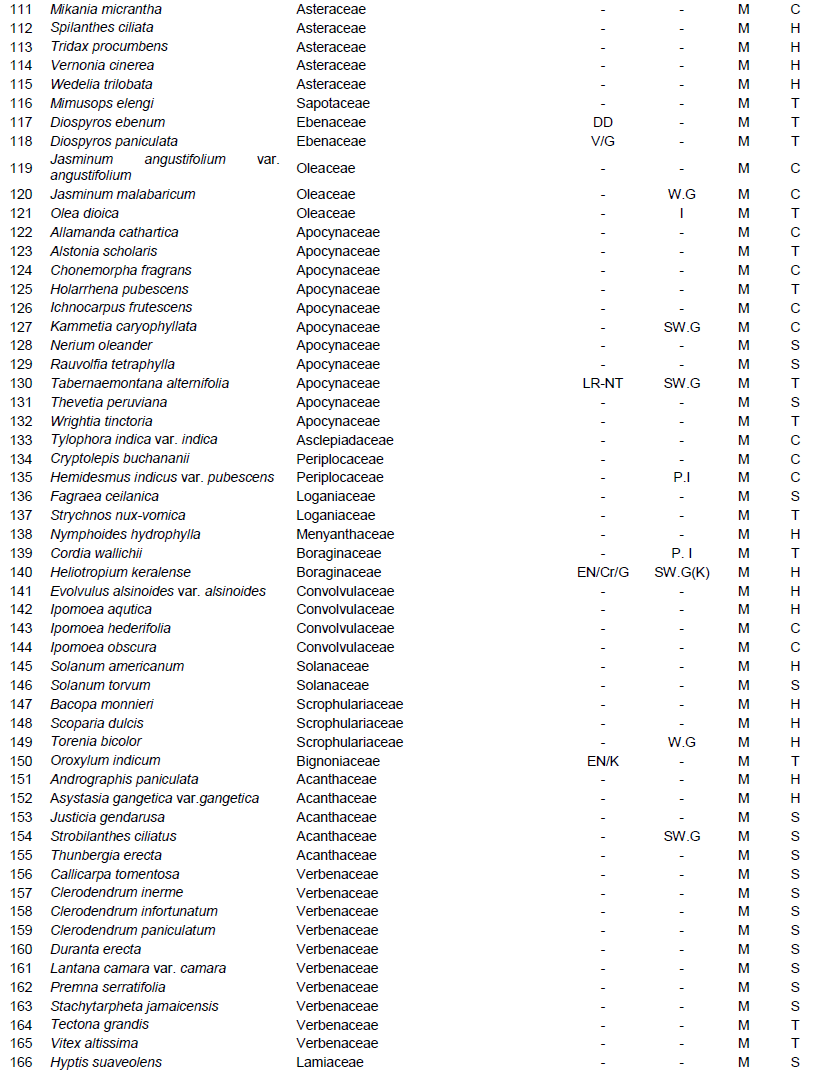 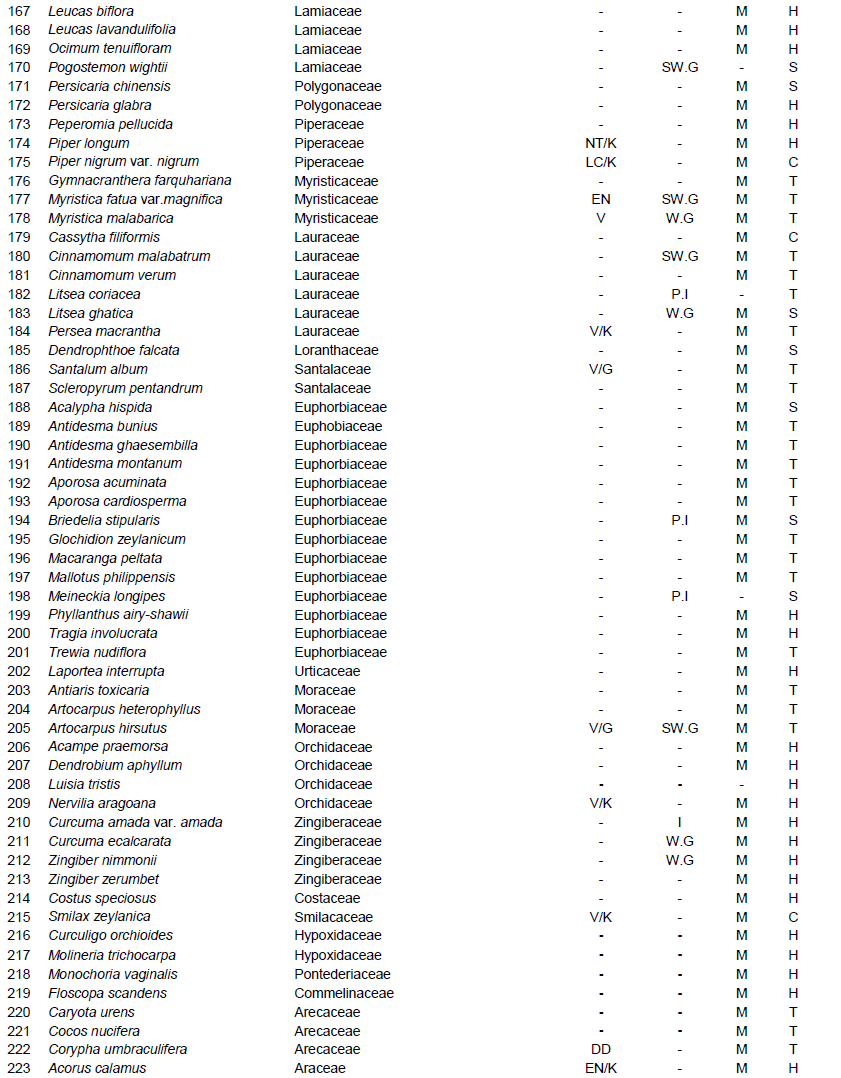 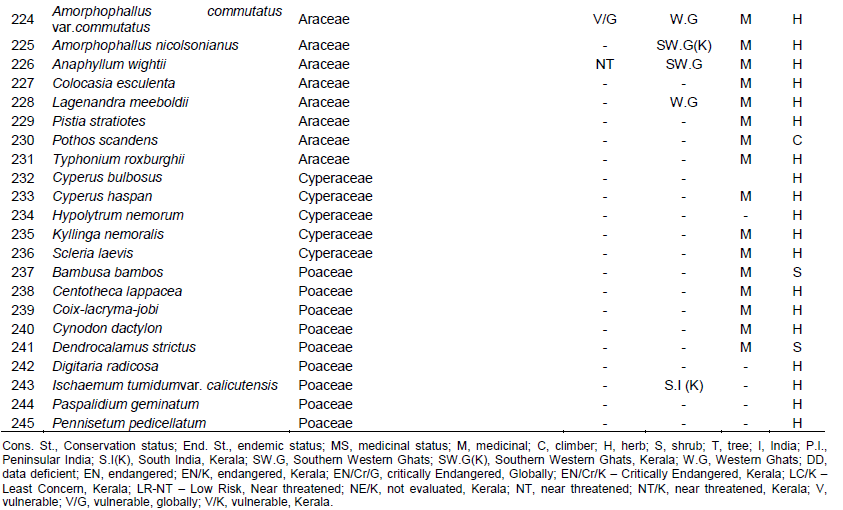 This sacred grove recorded 245 flowering plants belonging to 209 genera and 77 families. Among these 245 species, 75 species are herbs, 71 trees, 55 shrubs and 44 climbers. Among these species, 44 are endemics out of which 16 are endemic to Southern Western Ghats, 3 are endemic to Southern Western Ghats (Kerala), 13 are endemic to Western Ghats, 9 are endemic to Peninsular India and 2 are endemic to India and 1 is endemic to South India (Kerala). There were 34 threatened plants listed, out of which 3 are Critically Endangered, 5 Endangered and 4 Near Threatened, 1 is at Low Risk and Near Threatened, 16 are Vulnerable and 3 are with Data-Deficient status. Species with not evaluated and least concern status were also listed. Endemic plants like Sonerila rheedei, Litsea ghatica, Lagenandra meeboldii, Ischaemum tumidum var. calicutensis, threatened and endemic plants like Anaphyllum wightii and Kunstleria keralensis and Acorus calamus with endangered status were recorded. Myristica swamps having dense prominent stilt and breathing roots represented mainly by Gymnacranthera farquhariana and the endemic and threatened species Myristica fatua var. magnifica and M. malabarica were also recorded from this sacred grove. Out of the 245 species listed from this grove, 236 are medicinal constituting 96% of the flowering plants reported from this sacred grove.

The authors are grateful to Executive Director, Centre for Water Resources Development and Management (CWRDM), Kozhikode, Kerala, India for facilities and encouragement.