A total of ten soil samples were collected from four different dump sites in Port Harcourt Metropolis. The samples were examined for temperature, pH, total heterotrophic bacterial and fungal counts. The mean temperature values of the soils ranged from 27 to 28°C while the mean pH values ranged from 6.5 to 7.8. The total heterotrophic bacterial population ranged from 2.4 × 107 to 1.2 × 108 cfu/g while total fungal population ranged from 4.8 × 106 to 2.3 × 107 cfu/g. The bacteria population isolated from the waste dump sites were: Bacillus, Escherichia coli, Klebsiella, Proteus, Pseudomonas, Staphylococcus and Streptococcus species while the fungi included Aspergillus, Fusarium, Mucor, Penicillium and Saccharomyces species. The results showed that there was significant difference at 0.05 confidence limits between the pH levels at R(Ra:R1,R2; Rb:R3,R4) and U ( Ua:U1,U2; Ub: U3,U4). There was no significant difference at 0.05 confidence limits between the temperature levels, total heterotrophic bacterial and fungal counts at sites R and U. In dump sites R and U, there were no significant differences between the bacterial and fungal counts obtained in both sites.
Key words: Dump sites, Port Harcourt metropolis, bacteria and fungi.

Waste (also referred to as rubbish, trash, refuse, garbage, or junk) can be described as unwanted or unusable materials (Wikipedia, 2009). Wastes may be generated during the extraction of raw materials, the processing of raw materials into intermediate and final products, the consumption of final products, and other human activities. Residuals recycled or reused at the place of generation are excluded (UNSD, 1997). With population increase, there is increase in solid waste production making garbage pollution a serious problem (Khupe, 1996; Yaliang, 1996).

Waste management in developing countries is usually equated with land disposal or discharge into water bodies (Cilinskis and Zaloksnis, 1996). This method of waste management is unscientific; a nuisance to the public, hence, the resultant effect is pollution. When waste is dumped on land, microorganisms such as bacteria and fungi proliferate using the components of the waste materials as source of nutrient for growth as well as degrading the organic materials in the waste (Stainer et al., 1989).

Port Harcourt city does not have a sanitary landfill (Moffat and Linder, 1996). As a matter of fact, waste materials are deposited in certain “open” dump sites in some areas in Port Harcourt and allowed to compile until they are taken away or incinerated. Improper disposal of untreated municipal solid waste is not only harmful to human health but also a threat to the environment (Yaliang, 1996).

Pathogenic microorganisms and harmful chemicals in solid waste can be introduced into the environment when the waste is not properly managed (Wai-Ogosu, 2004; Ogbonna et al., 2006). Waste can contaminate surface water, ground water, soil and air which poses more problems for humans, other species, and ecosystems (Obire et al., 2002). Thus, the objective of the study was to identify the microorganisms associated with some waste dump sites around Port Harcourt metropolis.

Soil samples were collected from four dump sites located in Rumueme, Mille 4 and Rivers State University of Science and Technology both within Port Harcourt Metropolis in Rivers State, Nigeria. Twenty grams (20 g) of soil from dump sites were collected in sterilized cellophane or polythene bags. Contamination observed from the soil samples was therefore attributed to the waste disposal. All samples were well labeled and transported to the laboratory for analysis immediately after collection. The samples used as control were collected from areas devoid of waste disposal.

The surface debris was removed and the subsurface soil dug to a depth of about 15 cm with a hand shovel. Soil samples were scooped from depths of 0-15 cm in polyethylene bags within the perimeter of each refuse collection point (Isirimah et al., 2005). The temperature of each sample was determined immediately after collection at each waste collection point using a thermometer, after which the samples were transported to the laboratory. The samples were treated within 2 h after collection. The soil samples were sieved through a 0.2 mm wire mesh, which was previously swabbed with 95% ethanol, to obtain fine soil particles (U.S. EPA, 1978).

The physicochemical parameters of soil samples were determined using Association of Official Analytical Chemists (AOAC, 1990) method. The pH of the soil was determined using the Jenway pH meter (3015 model). The mercury thermometer was used to determine temperature.

The total heterotrophic bacterial count was performed in duplicates on dried nutrient agar plates and incubated at 30°C for 24 h. At the end of the incubation period, isolation for pure culture was done.

Acidified potato dextrose agar plates containing streptomycin (1 mg/100 ml) were used to obtain fungal isolates. The plates were incubated at 30°C and observed after 48 h for yeasts and 96 h for mould, after this, isolation of pure isolates was done.

Identification and Characterization of isolates

The pure bacterial strains were identified on the basis of their morphological and biochemical tests. The pure cultures of the bacterial isolates were subjected to various morphological and biochemical characterization tests such as color, shape, elevation, consistency , margin , catalase test, MRVP (Methyl Red-Voges Proskauer test), fermentation of sugars, kovacs citrate, indole, hydrolysis of starch and sensitivity tests (Olutiola, 1991). In order to determine the identity of bacteria isolates, results were compared with standard references of Bergey’s Manual of Determinative Bacteriology (Buchanan and Gibbons, 1974).

The soil devoid of waste (control) had the following bacterial and fungal counts: 2.1 x 104 and 1.1 x 103 cfu/g respectively. The total heterotrophic bacteria counts in the dump sites from Rumueme, Ra and Rb ( R1,R2, R3 and R4) and Rivers state University of Science and Technology, Ua and Ub (U1, U2, U3 and U4) are shown on Table 1. All the samples from same location were taken one kilometer from each other. 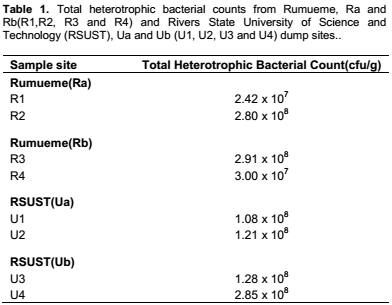 The Total fungal counts in the dump sites from Rumueme, Ra and Rb ( R1,R2, R3 and R4) and Rivers state University of Science and Technology ,Ua and Ub (U1, U2, U3 and U4) are shown on Table 2. All the samples were taken one kilometer from each other. The results of the physicochemical parameters in the uncontaminated site and waste dump sites are shown on Table 3. 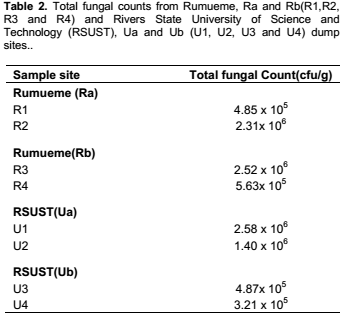 The microbial population obtained at Rumueme and Rivers State University of Science and Technology, Port Harcourt waste dump sites ranged between 27 and 28°C. These values fell within the mesophilic range of temperatures for most pathogenic bacteria whose optimum temperature for growth is 37â—¦C with upper and lower temperature limits of 40-50 and 15-20°C, respectively (Arora, 2004). Obire et al. (2002) reported that during initial compositing development, the mesophilic flora predominate and are responsible for most of the metabolic activities that occur. This increased microbial activity elevates the temperature of the compost, with the subsequent replacement of mesophilic population by thermophilic flora such as Bacillus, Aspergillus, and Mucor reported in this study. The degree of acidity (pH), reported in this study for all the waste dump sites ranged from pH 6.5 and 7.8. Obire et al. (2002) reported a pH range of 5.4 to 7.9 and temperature of 27-28°C, respectively. Hagerty et al. (1973) reported that the initial pH of solid waste is between pH 5.0 and 7.0 for refuse which is about 3 days old while, Pavoni et al. (1975) mentioned that in the first 2 to 3 days of composting, the pH drops to 5.0 or less then begins to rise to about 8.5 for the remaining aerobic process.

The isolation of Bacillus, Staphylococcus, Klebsiella, Pseudomonas, Proteus and Streptococcus species from the dump sites is an indication that microbes are not only ubiquitous in nature but also populate the soil, thus increase the nutritional value of the soil. These microbes produce enzymes like DNase, Hyluronidase, staphylokinase, staphylolysin, streptokinsase among others that help degrade waste materials at dump sites. Secretion of enzymes by fungi was reported by Chukwu et al. (2004).