The present work was carried out in the in river Jhelum of Kashmir Himalaya to assess the density and diversity of fungal flora, to isolate and identify the fungi from the water along with some physical parameters like pH and temperature which was carried out between June-November, 2011 at four sites differing from each other markedly in terms of biotic and abiotic factors. During the study, a variety of fungal strains were isolated and identified from the water of river at the four sites. The highest viable count of fungi was observed at site III with a cfu/ml of 3.6 x 102 in the month of July and the lowest viable count at site IV with a cfu/ml of 2.7×102 in the month of November. Among most dominant of the isolate identified 20% were Aspergillus spp. followed by 4% Pencillium spp. and 4% Candida spp. Comparative analysis of different types of colonies found at the four sites during the study indicates that the fungal density was dominant in the month of July.

The valley of Kashmir is a lacustrine basin with an average altitude of 1585 m a.s.l. Both the valley and its surrounding mountains are home to a large number of aquatic habitats like lakes, ponds, streams, rivers and wetlands. It is estimated that 6% of the land area of Jammu and Kashmir is under aquatic habitats (Zutshi and Gopal, 2000). Water is essential to sustain life, and without it life becomes impossible, it is an indispensable commodity, which should be easily accessible, adequate in quantity, free of contamination, safe, affordable and available throughout the year in order to sustain life (Al Khatib and Salah, 2003). Fungi are among the most diverse groups of living organisms on earth, though inadequately studied worldwide (Grover et al., 2007). Aquatic fungi play a crucial role in the freshwater ecosystem in nutrient cycling by breaking down leaves and woody substrates and also as symbionts (Barlocher and Kendrick, 1981). Physical chemical factors of ecosystem play important role on the growth, multiplication, distribution and seasonal periodicity of aquatic fungi (Park, 1972). Fungi belong to the kingdom Eumycota. This kingdom comprises five phyla namely Ascomycota, Basidiomycota, Zygomycota, Chytridiomycota, and Glomeromycota (Kirk et al., 2001; Schußler et al., 2001). Penicillium species have been frequently recovered from water in the various studies performed. Several of the species in genus Penicillium and Aspergillus are known to produce mycotoxins in other substrates, such as food and beverages (Moreau, 1979; Pitt and Hocking, 1999) and detection of aflatoxins produced by A. flavus in water from a cold water storage tank was demonstrated by Paterson et al. (1997). Predominant fungal genera and species in treated and untreated water are: Aspergillus, Cladosporium, Epicoccum, Penicillium, Trichoderma, Arthrinium phaeospermum, A. flavus, C. cladosporioides, Fusarium culmorum, Mucor hiemalis and Trichoderma harzianum (Kinsey et al., 1999). Many other fungal genera isolated from Danube river water in Europe include: Mortierella, Absidia, Rhizopus, Acremonium, Beauveria, Doratomyces, Monilia, Rhizopus arrhizus, Acremonium strictum, Fusarium oxysporum and Stemphyllium botryosum (Tothova, 1999). What governs the distribution of freshwater fungi is difficult to determine, although some species appear to be more common either in temperate or tropical regions (Shearer et al., 2007; Raja et al., 2009).
Since no substantial work has been carried out regarding the current understanding and distribution of fungal flora in the Jhelum River. Therefore the objective of this study was to focus on the isolation and identification of the fungal flora from this important river.

Study area and study sites
Jhelum, the major waterway of Kashmir, originates from the spring Verinag located in the foot of  a spur of the Pir Panjal Mountains in the district Anantnag from where a number of tributaries join the Jhelum and make it navigable from Khannabal to Wular Lake. The river runs a course of 203 km through the valley and the hydrology of River Jhelum is largely controlled by snowmelt in spring season and heavy rains from June to September. A total of four study sites (Figure 1) markedly different in respect of geographical and demographical features were selected for the sampling. These sites were characterized by having the moderate human population on both the banks along with the agricultural fields: 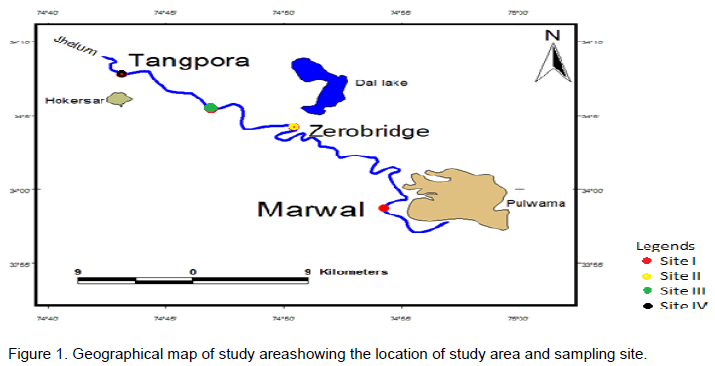 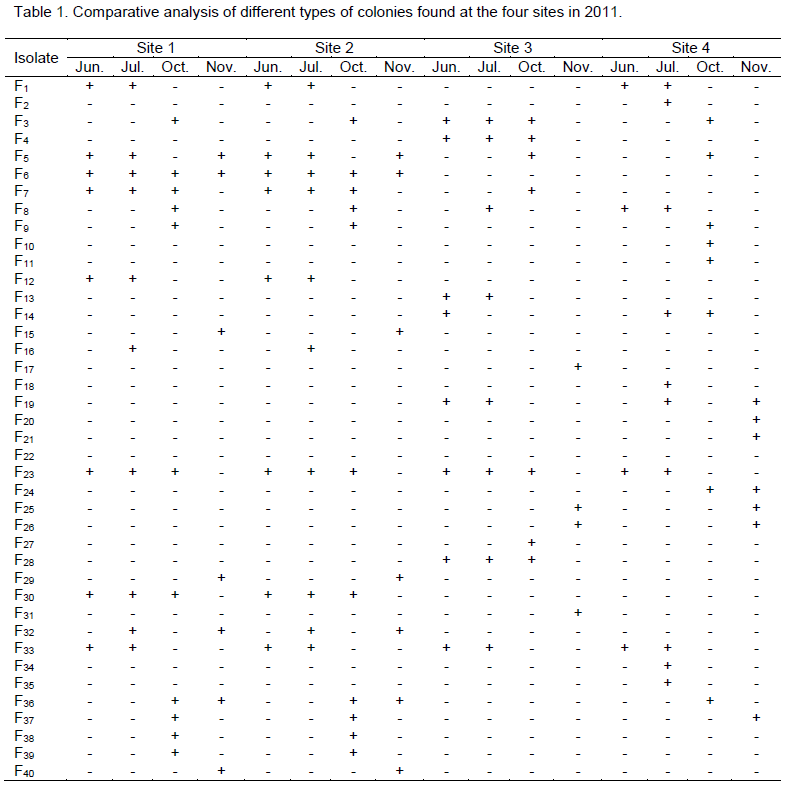 maximum population during July was 3.6×102 for site 3 and least for site 1 (1.1×102) in November as shown in Table 3. The diameter of the identified species was recorded and ranged from 1.5 to 1.63 cm; the elevation of these species included flat, raised, convex and filamentous. The margin included filamentous entire convex undulate and entire. The colour of the colonies on both upper and reverse sides varied from cream, white, yellow, pink etc. Aspergillus sp. contributed 20% followed by Pencillium sp. (4%) and Candida (5%) as shown in Figure 2. 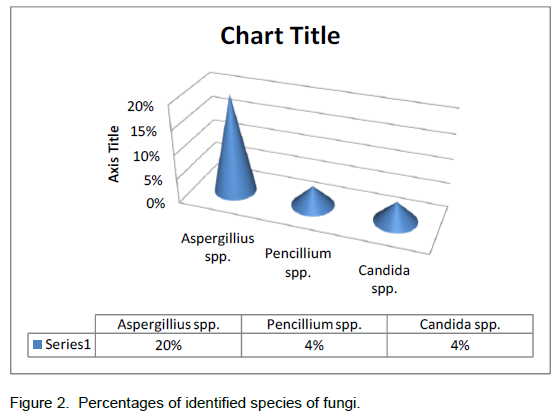 The results obtained regarding the Aspergillus and Penicillium species during the study are in agreement with the study of Kellerman and McBeth (1912) who mentioned that the species of genus Aspergillus and Pencillium are found in polluted lake waters and act as cellulose decomposer. These genera have also been reported frequently from the drain waters with maximum densities during high pollution (Khulbe and Durgapal, 1994). Candida spp. obtained during the study was found to be pathogenic to humans which are a concern but these species can thus act as good indicators of water pollution (Cooke, 1954). The data recorded for water indicates higher temperature during July and lower during November (Table 3). The fungal load also shows decreasing trend from June to November. The higher temperature in July may be the reason for better growth of fungal population. Similar results were suggested by Bock (1956) and Dar et al. (2013), who reported optimum temperature for growth fungi bacteria has to be between 15?C and 31?C thus confirming the results obtained during the study. The maximum fungal population in July may possibly be due to more feasible temperature and increase in organic matter (Khulbe and Durgapal, 1992). Increase of fungi indicates increasing organic loading in water (APHA, 1998). During our study in the month of November, fungal population was minimum which may be attributed to the low temperature. These results are in agreement with the study of Khulbe and Durgapal (1992) who in his studies on Naintal Lake, has reported that fungal population was maximum in August during high temperature while it was lowest in the month of January when temperature was relatively low.

From the study, it may be concluded that Aspergillus sp. and Pencillium sp. were present at all four sites during the study while as Candida sp. was found at site I in October and November. However, the Site III, on the River Jhelum showed the highest density of cultivable fungal population.

The author(s) declare there is no conflict of interests.