Waterbirds are ubiquitous components of wetland ecosystems, that is, top predators and may have effect on the distribution and richness of fishes and other fauna (Steinmetz et al., 2003; Garcia and Yorio, 2007). Waterbirds utilized different wetland habitats for nesting, breeding, foraging, stopover and wintering grounds during migration (Romano et al., 2005; Guadagnin et al., 2005; Junk et al., 2006; O’Neal et al., 2008; Saygill et al., 2011). The waterbird species richness and abundance are influenced by environmental factors such as water level fluctuation, water depth, habitat richness and ecological interactions, that is, predators, richness of food and competition (Guadagnin et al., 2005; Cintra et al., 2007; Cintra, 2012). They are consumers and bio-indicators, that is, their presence or absence may indicate the current status of a particular dwelling wetlands habitat.

It has been stated that >50.0% world’s wetland areas had been lost (Fraser and Keddy, 2005; Battisti et al., 2008) due to human induced activities such as discharge of urban sewage, pesticide runoff off from surrounding agricultural fields (Melink and Riojas-Lopez, 2009), draining for conversation into agricultural fields and development of housing societies (Gautam and Kafle, 2007; Kafle et al., 2008). The habitat loss and degradation had adversely affected the population of many waterbird species such as rails, storks, grebes, jacanas and waders, etc, across the world (Ma et al., 2010). Fruther more, some are critically endangered, threatened and extinct due to habitat loss and degradation (O’Connell, 2000; Deluca et al., 2008; Delany et al., 2010; Suazo et al., 2012; Lafferty et al., 2013).

Paya Indah Wetland (a wildlife sanctuary) encompasses of 3050 ha, out of which 450 ha are under the administration of the Department of Wildlife and National Parks, Peninsular Malaysia. The study area (Figure 1) is located within the quadrant of 101°10′ to 101°50′ longitude and 2°50′ and 3°00′ latitude. 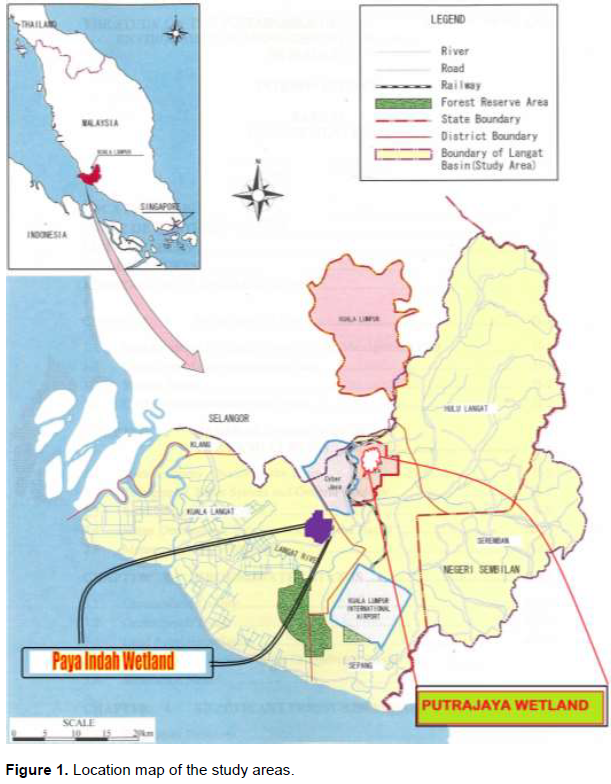 Monthly waterbird surveys were carried out from January to December, 2011 employing direct visual observation. The presence of waterbirds was determined by using the point count method employing direct observation and employing 10 × 50 binocular. A total of 100 point stations (50 points in each wetland) were established to detect the different waterbird species inhabiting both wetlands. The location of each point count station was established at intervals of 300 m apart to avoid the double counting of the same waterbird species at more than one station (Figures 2 and 3). The survey of waterbird species was carried out early in the morning, that is, between 0730 and 1000 h, and mostly waterbird species were active during the morning hours and easy to observe. The methodology described by Aynalem and Bekele (2008), Zakaria et al. (2009) and Rajpar and Zakaria (2014) was followed. 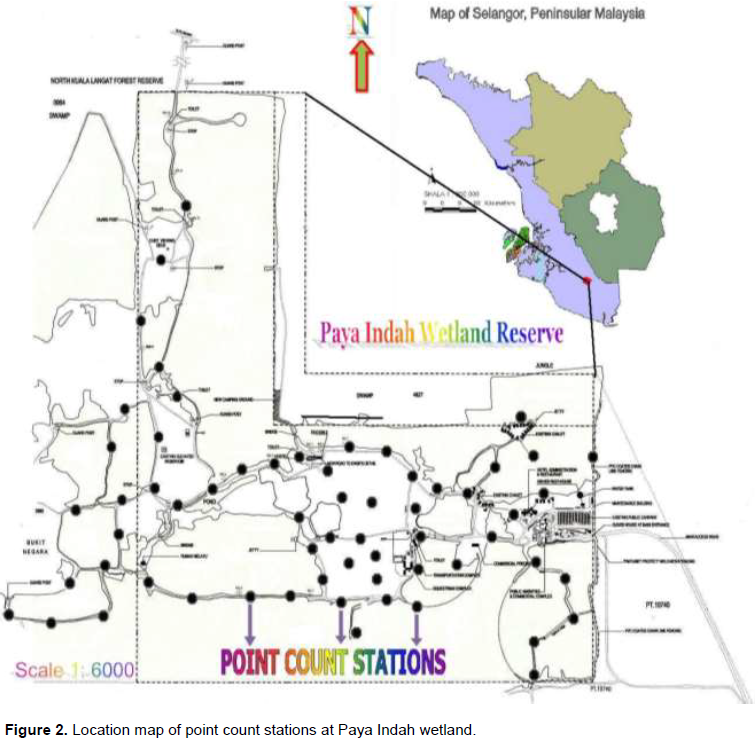 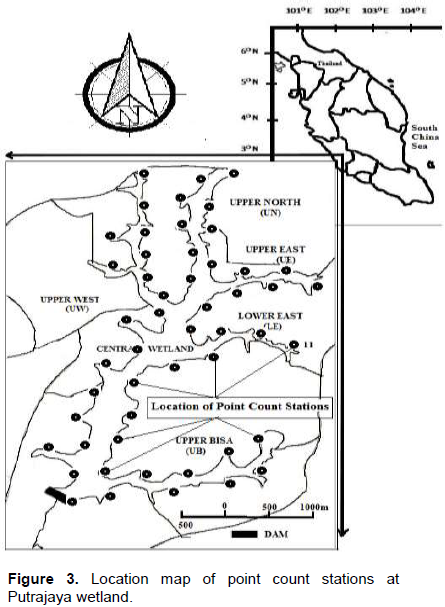 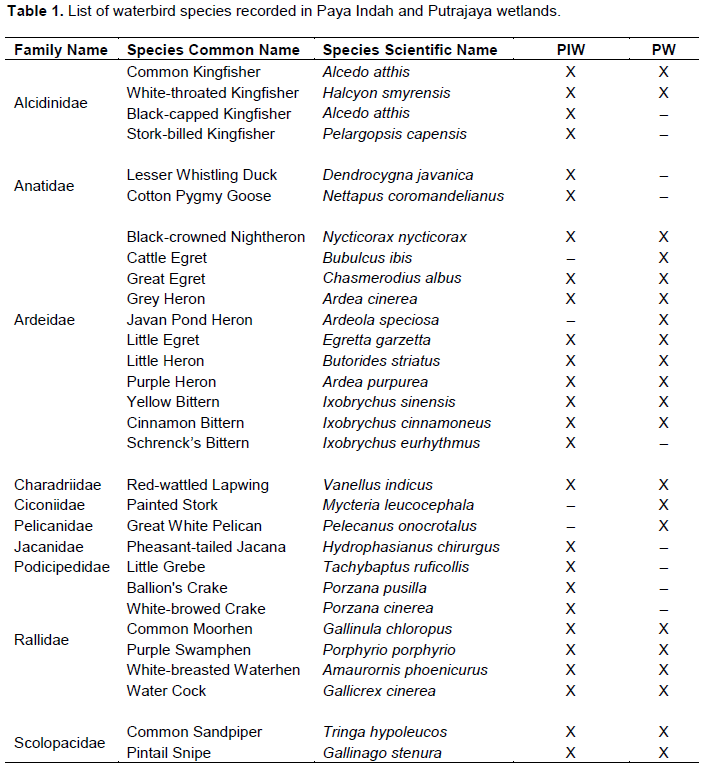 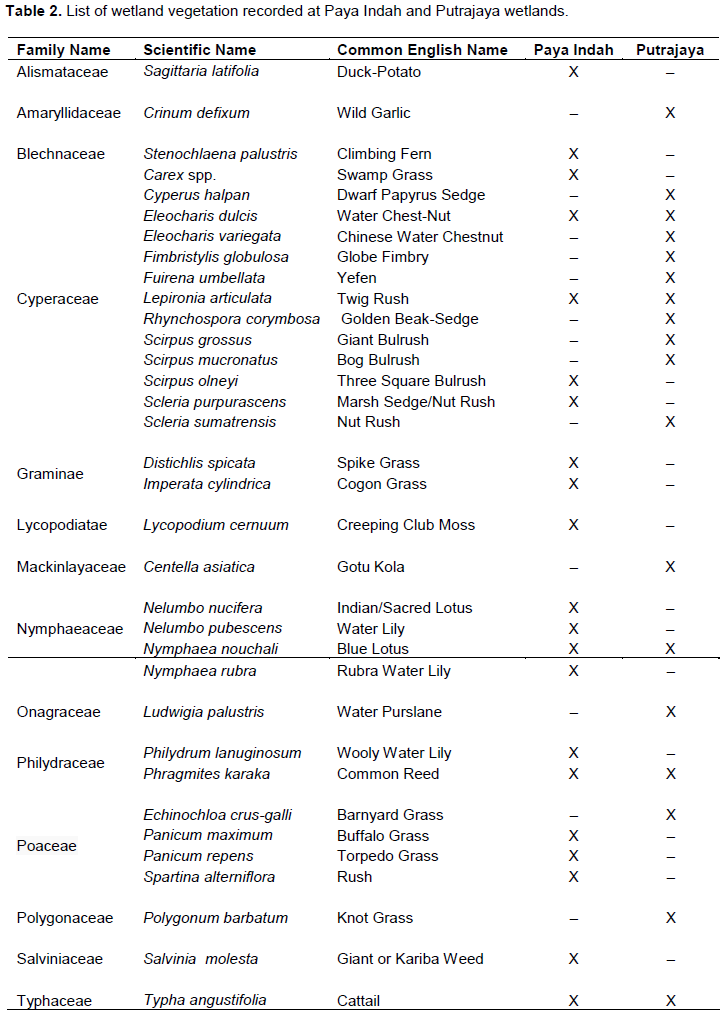 Fruther more, the sampling of 21 aquatic plant species at Paya Indah and 18 aquatic plant species at Putrajaya habitats indicated that both habitat may vary in vegetation structure and composition. For example, Paya Indah wetland is dominated by Nelumbo nucifera, Nelumbo pubescens, Nymphaea nouchali, Nymphaea rubra, Scirpus olneyi, Scleria purpurascens, Distichlis spicata, Lycopodium cernuum, Philydrum lanuginosum, Panicum sp., Spartina alterniflora and Salvinia  molesta. On the contrarily, Putrajaya wetland is dominated by Cyperus halpan, Eleocharis variegate, Fimbristylis globulosa, Fuirena umbellate, Rhynchospora corymbosa, Scirpus sp., Scleria sumatrensis, Centella asiatica, Nymphaea nouchali, Echinochloa crus-galli and Polygonum barbatum. The difference in wetland vegetation and structure could be due to variation in water level and quality, surrounded landscape, and the inflow of water from the catchment area. Putrajaya wetland is surrounded by the catchment of river Chua and Baisa and is shallow in water depth (Rajpar and Zakaria, 2013) while Paya Indah wetland is surrounded by housing societies and agriculture fields, oil-palm plantation and peat swamp forest. The variation in aquatic vegetation structure and composition might have created a variety of microhabitats which had attracted a wide array of waterbird species to utilize the different areas of wetlands in order to satisfy their needs to perform various activities. It has been illustrated that habitat structure of wetland may vary depending upon water supply and surrounding landscapes (Winter et al., 2005). Waterbirds often select available wetland habitats which provide plenty of food resources, protection from predators and harsh weather and also offer suitable breeding sites for them (Marshall and Cooper, 2004; Cunningham et al., 2008; Rajpar and Zakaria, 2011).

Overall, the findings of this study revealed that Paya Indah wetland  is  rich  in  waterbird  species  composition and habitat characteristics as compared to Putrajaya wetland habitat. This might be due to the richness and diversity of aquatic vegetation, occurrence of suitable foraging and breeding sites for different waterbird species, especially ducks, goose, swamphen, moorhen, crakes, jacanas and sandpipers. These waterbird species are secretive in behaviour, that is, shy species and often prefer large waterbodies dominated by thick aquatic vegetation. The other reason could be that Paya Indah wetland is deep, wide and interconnected with a chain of wetlands, while Putrajaya wetland is shallow and running in between the buildings.