Knowledge of the distribution of insect pests of corn at different stages of the plant is essential for the development of appropriate control strategies. This work was carried out in a rural environment in M’Bahiakro, in East Central Côte d’Ivoire. The study of dynamics, biodiversity and insect abundance on each plot was carried out. For this purpose, six plots, of which two were in the forest zone and four in the savanna zone, were visited from September 2012 to January 2014. The analysis of results showed that the flowering stage had the largest number of insect populations and the most diverse ones (1665 insects on average distributed over 27 families). The distribution of insect pest populations appears to be influenced by environmental characteristics. In the savanna, diversity and abundance indices of insect pests appeared to be higher than those in the forest (Shannon diversity index H’=2.57 in the savannah against H’=2.15 in the forest; Abundance index A’=200 in the savannah against A’=130 in the forest).

Corn (Zea mays Poaceae, Linné 1753) occupies an important place among food crops. It is grown in 150 countries. Corn is the most widely grown cereal in the world, with grain yield slightly ahead of rice and wheat (Gay, 1999; FAO, 2004). However, the yields in developing countries remain very low (FAO, 2000). In Côte d’Ivoire, average yields in rural environment are in the order of 0.8 tons per hectare compared to 2 to 5 tons
per hectare in controlled environments (CNRA, 2006). Unfortunately, this crop is confronted by numerous constraints, including a strong attack by insect at all developmental stages (Pollet, 1975; Moyal, 1988; Foua-Bi, 1989; Camara et al., 1990). Insects affect the plant either directly by feeding on the organs (roots, stems, leaves, flowers or fruits) or indirectly by transmitting pathogenic microorganisms to the plant, causing diseases and consequently loss of fruit nutritional or market quality (Ochou, 1996). In West Africa, especially in Côte d'Ivoire the pests and diseases of this crop remain little known and the knowledge of them are not recent. Therefore, they need to be updated. Postharvest losses due to insects are one of the major concerns of smallholders (Ochou, 1996).
In Côte d’Ivoire, the entomological works on corn are few and mostly concentrated in the north and central part of the country (CNRA, 2006). The only entomological works related to the phenological stages of corn were carried out by Pollet (1975) on Adiopodoumé in the southern part of the country. Knowledge of the distribution of these insect pests at different developmental stages of corn is essential for working out appropriate control strategies. This study was carried out to assess the effect of environmental characteristics (savanna and forest) on the diversity and abundance of insects pests.
Study site
The study area was located in M’Bahiakro, in East Central Côte d’Ivoire (longitude 4°9’W and latitude 7°40N) (Figure 1). The average temperature recorded was 25.8°C and a total rainfall of 1024 mm. The vegetation was characterized by semi-deciduous forests and savannas (Mangenot, 1955) on ferralitic soil (Yessoh, 1973; Anonyme, 2010). 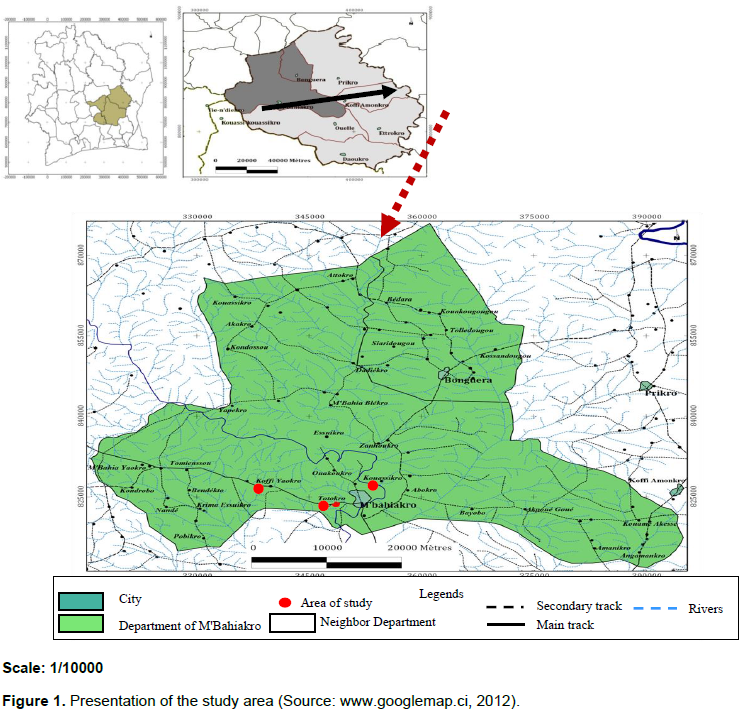 The corn variety used was the early variety PR91331-SR. The grains were dentate and yellow in color. The duration of the development cycle was 90 days (CNRA, 2006). The four phenological stages were identified according to the methodology described by Pollet (1974). The observations were carried out according to the four development stages: the “rosette stage”, the “elongation stage”, the “flowering stage” and the “grain maturation stage”.
The technical equipment consisted of the tools for capturing, sorting, preserving and identifying the insects.
Plot selection
The study was conducted in a rural environment. Overall, six corn fields of about 7 days of development (“emergence stage”) were selected: Four plots in the savanna zone (2 near Totokro village and 2 near Koffiyaokro) and two others in the forest zone (near Kouassikro). The spacing was 80 × 40 cm (Figure 2). 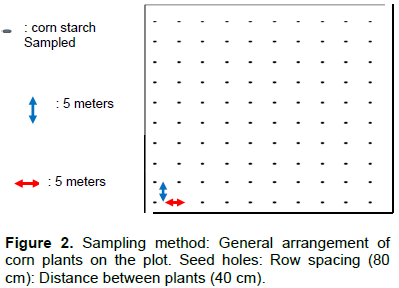 Insect sampling, collection and identification
The experimental design used was similar to the one proposed by Pollet (1975). In our study, the six plots were monitored throughout the corn cycle. Each plot was visited once a week from sampling and collection took place on-farm from September 2011 to January 2012. Observations continued until the ears dried season.
Each week and for each plot, 10 rows of corn, 5 m apart, were chosen, and on each selected row 10 plants 5 meters apart were also chosen. A total of 100 plants were selected for each plot each week throughout the development cycle. Insects were picked up by hand or captured with sweep nets and stored in 70% alcohol-containing pillboxes.
In the laboratory, the insects were observed using the CETI Belgium binocular microscope and the ZEISS Germany microscope and identified using the identification keys (Appert and Deuse, 1988; Jean and Boisclair, 2009).
Statistical analysis
The diversity indices of each phenological stage of corn per plot were determined using software R version 2.8. This index accounts for both the species richness and the abundance of the different species. The Shannon-Weaver index (H’) is independent of sample size, H’= − Σ pi x log2 (pi). Where pi = probability of encounter of species i; When H’ tends towards 0, diversity is minimal. It is maximum when it tends towards 5.
The relative abundance of insects in the different environments and per phenological stages of the plant was calculated. Thus, the average number of individuals of a sampled species i was calculated. It was based on the incidence (presence = 1 and absence = 0) of the species in question.
A = ∑ ni / N;
Where ni = incidence of the individual of species I, and N = total number of insects of the phenological stage or of the plot.
Then, based on the abundances of collected taxa, the environments were classified using the Ward method (similarity of environments) using Statistica software version 6.0. An analysis of variance (ANOVA) helped compare the diversity and abundance of populations of insect pests of corn in savanna and forest plots in the city of M’Bahiakro. This was done using Statistica software version 6.0 at 5% level. 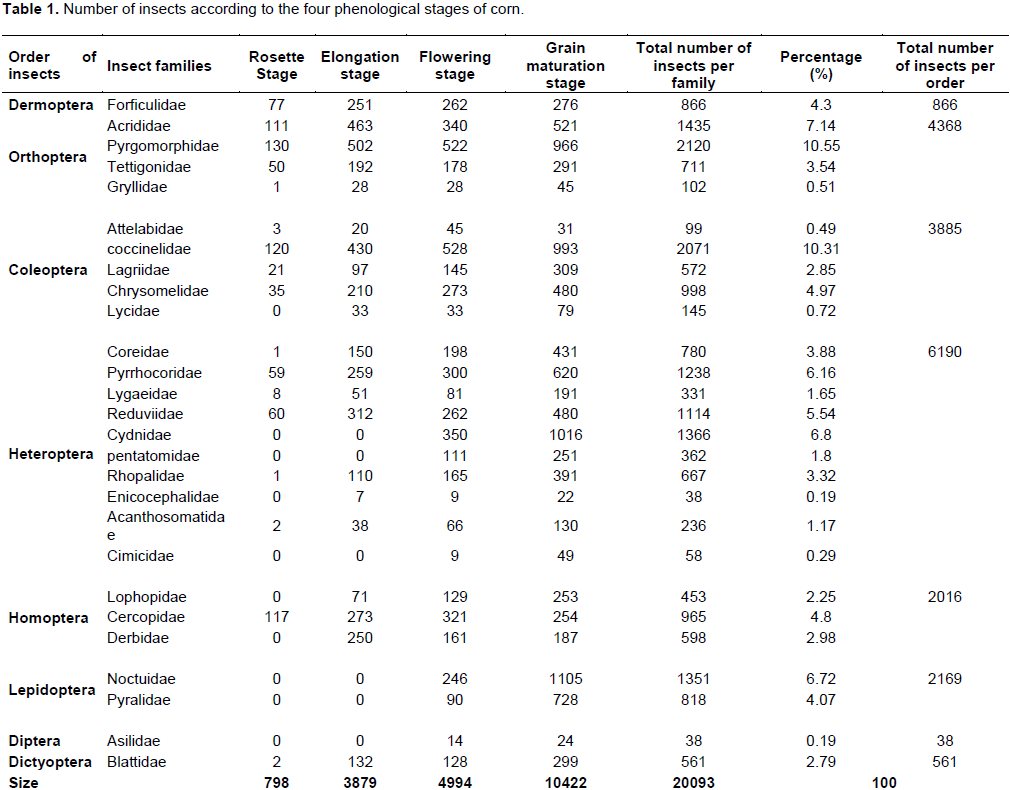 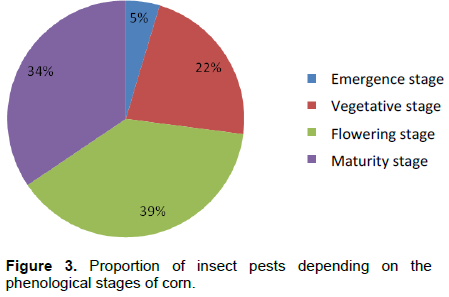 Overall diversity
The “ emergence” stage had the lowest biological diversity index with H’=1.72. The “flowering” and “grain maturation” stages were the most  diversified  with diversity indices of H’=2.67 and H’=2.74 respectively. At the “vegetative” stage the diversity index had a value of H’=2.40. There was no significant difference in diversity between flowering and maturation stages of the grains (Figure 4). 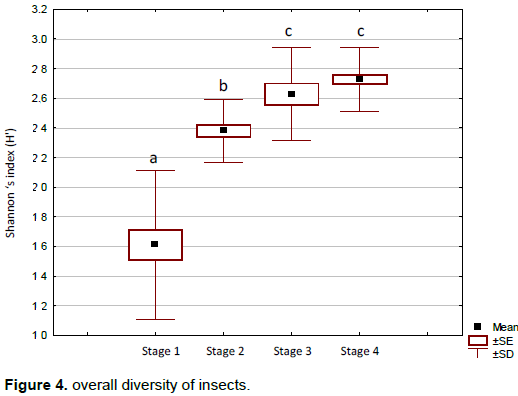 Diversity of insects according to plots
Concerning the Totokro plots (Figure 5A and B), savanna zones, the lowest value of the diversity index observed at the emergence stage was between H’=1.7 and H’=1.9 (Anova, p< 0.05). The flowering and grain maturation stages showed the greatest diversities with indices ranging between 2.8 and 3. The analysis showed that there was no significant difference in diversity indices between the flowering and grain maturation stages for the first plot and vegetative,  flowering  and  grain  maturation for the second plot. 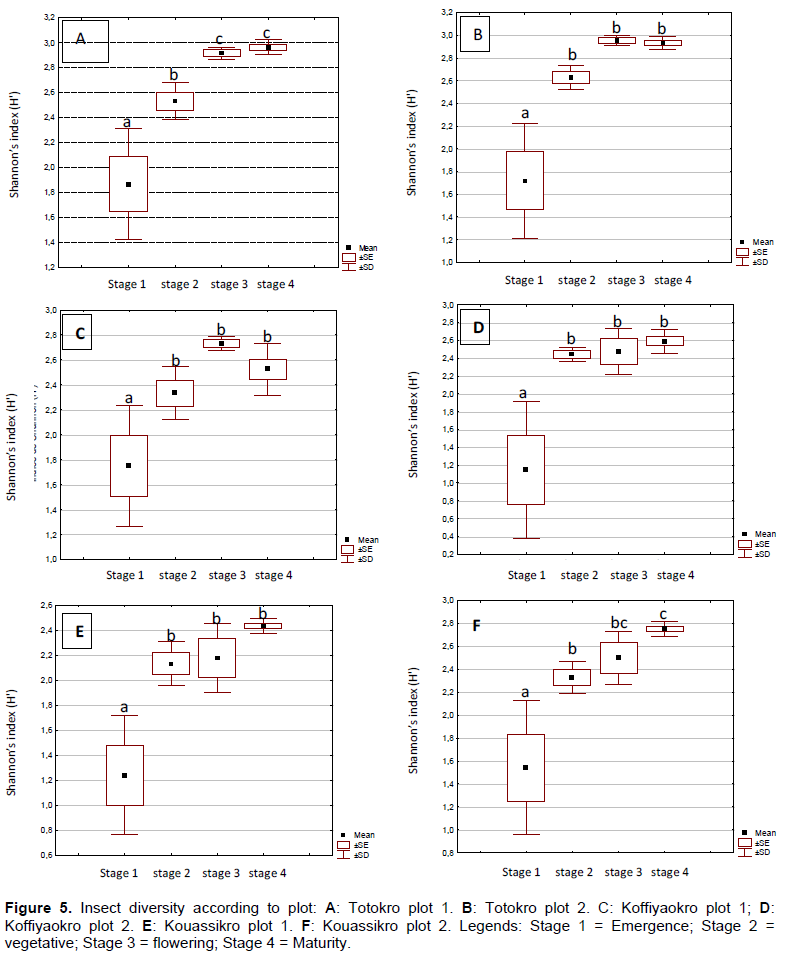 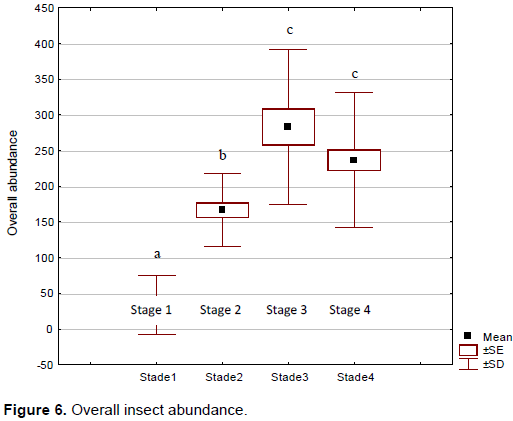 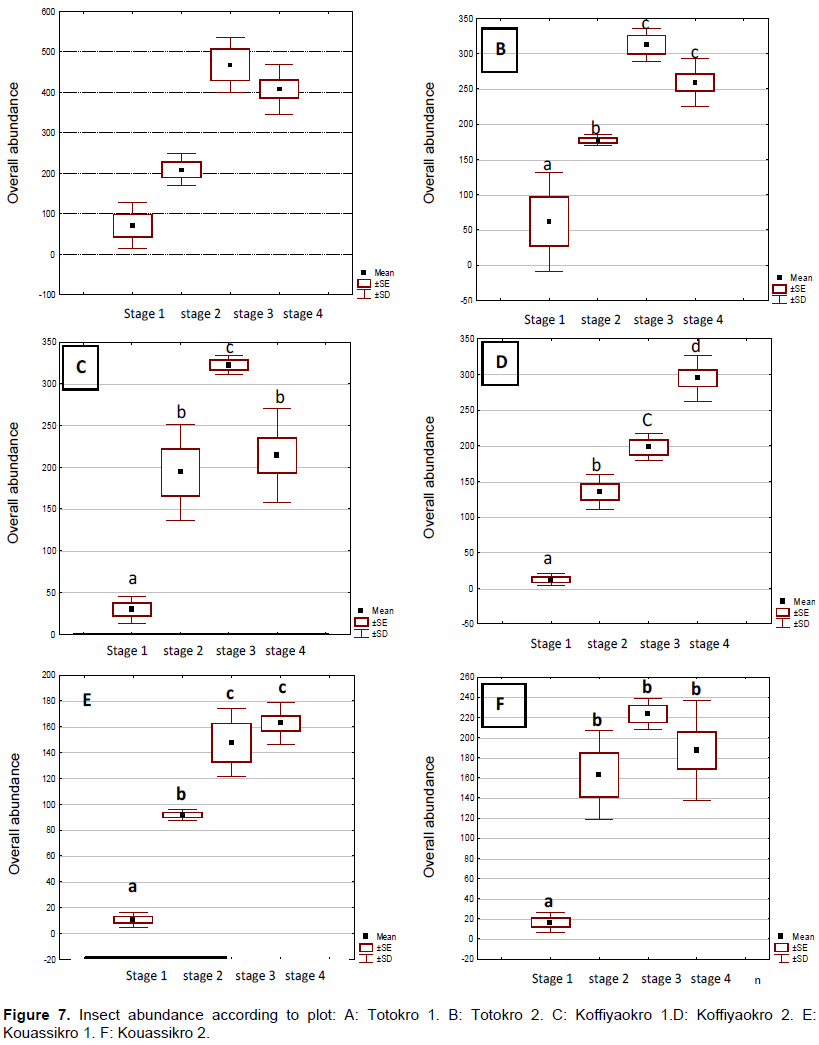 Effect of the environment on biological diversity
The results showed that savanna plots were the most diverse with 2.43<H’<2.71 unlike forest plots with H’<2.45. However, most of the families observed in the savanna zone were also observed in the forest zone, except for the Derbidae family observed only in the savanna.
The analysis of the results revealed that both Totokro plots located in the savanna zone were the most diverse with H’=2.71 and H’=2.70 respectively. They were followed by the Kouassikro 2 and Koffiyaokro 2 plots with H’=2.45 and H’=2.43, respectively. The lowest value of this index was observed in the Kouassikro 1 plot (H’=2.14) (Figure 8A). These values were statistically homogeneous between environments (Anova p > 0.05). 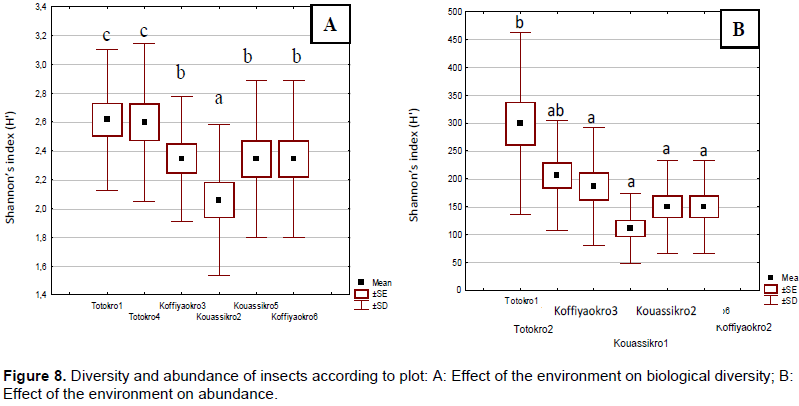 Effect of the environment on the abundance of insect populations
The highest abundance was recorded on Totokro 1 plot (208.77 individuals). It was followed by the neighboring plot Totokro 2 (205.72 individuals). The other 4 plots had the lowest abundances between 110.01 and 186.55 individuals. These values were statistically homogeneous between the 4 plots (Figure 8B).

The diversity and abundance of insect pests are closely related to the different development stages of corn. These parameters are higher at the flowering and “grain maturation stages. These results are close to those obtained by Pollet (1974). Indeed of the 18 phytophagous insects and the 4 stem borers assessed by this author during the complete cycle of corn, all are present at the flowering stage except 2 stem borers whereas at the grain maturation stage, the 4 stem borers and 12 phytophagous insects are present. Furthermore, Jean and Boisclair (2009) showed that at the “Flowering” stage, there is a significant difference in diversity of insect pests of cultivated corn. The vast majority of insect pest families identified by these authors during the corn development cycle were also observed at the “flowering” stage. Indeed, in addition to insects that attack corn at the vegetative stage, particularly Acrididae, Pyrgomorphidae, Tettigonidae and some Coleoptera, another group of insects that attack the inflorescences (male and female) and the ears appeared (Appert and Deuse, 1988; Jean and Boisclair, 2009). Male and female inflorescences are specifically attacked by some Hemipter, Coleoptera and larvae of Lepidoptera (Mason et al., 1996; Heinrichs et al., 2000). At these development stages (flowering and grain maturation), the plant has various nutritive resources sufficient for a wide variety of insect pests as food (O’Day and Steffey, 1998; Boisclair and Fournier, 2006). These stages are therefore the most vulnerable (Van Duyn, 2004; Hazzard et al., 2007).
The savanna plots showed overall significant magnitudes of diversity and abundance in relation to forest plots. These results were obtained by Pollet (1974). Indeed, the observations carried out by this author in controlled plots in southern Côte d’Ivoire (forest zone) revealed a low biological diversity. This suggests that plots in savannah zones with a generally warm climate might favor insect activity while wet periods do not favor high activity of insect pests of corn.

This study showed that in the rural environment, a great diversity of insect pests colonizes the plots of corn grown in the city of M’Bahiakro. The insect pests of corn grown in this city belong to 27 families of insects distributed within 8 orders. The most common insect orders are the Orthoptera, Coleoptera, Hemiptera and Lepidoptera. The main families stemming from these orders are Acrididae, Pyrgomorphidae, Coccinellidae, Chrysomelidae, Pyrrhocoridae, Reduviidae, Cydnidae, Cercopidae, Noctuidae and Pyralidae.
The distribution of insect pest populations is closely related to the development stage of corn. The flowering and maturation of grains are the development stages where the abundance and diversity of insect pests are important. At these development stages (flowering and maturation), the great majority of insect pests are present.
The distribution of insect pest populations is also influenced by environmental characteristics. In the savanna, diversity and abundance indices are higher than those obtained in the forest.