An ecological study on population structure of rodents was conducted in Alage, Southern Ethiopia. Sherman live traps were used to capture rodents in four habitats and trapping sessions. A total of 684 rodents that represented 11 species were captured. Regarding population size and density, Mastomys natalensis was the dominant species followed by Arvicanthis dembeensis while the least was observed in Graphiurus murinus in the study period. The highest biomass was recorded in A. dembeensis (6771.43 g/ha) followed by M. natalensis (6246.63 g/ha) and M. erythroleucus (3257.14 g/ha) while the least was recorded for G. murinus (10.2 g/ha) followed by Mus musculus (35.36 g/ha).The largest and lowest biomasses per habitat type were recorded for M. natalensis and M. musculus, respectively from bushland. There was variation in the population size, density and biomass among trapping sessions and habitats with the highest estimate in the second trapping session and bushland habitat type. All age groups were represented in the population with seasonal and age group variation. In conclusion, there was variation in population size, density and biomass of rodents among habitats and seasons. These population fluctuations might be mostly due to variation in rainfall, habitat heterogeneity, vegetation cover, reproductive patterns, quality and quantity of food and water.
Key words: Age, biomass, density, population, rodents

Rodents, from mammals, constitute the largest order with more than 2,700 species and account for over 42% of all mammal species (Alpine et al., 2003; Singleton et al., 2003). Out of 2,700 species of rodents, 84 species have been recorded in Ethiopia, and of these 21% are endemic (Bekele, 1996a, b; Yalden et al., 1996). With their prolific nature of breeding, they represent a significant amount of biomass in different ecosystems. The abundance and distribution of small mammals could be affected by the nature and density of vegetation coverage (Bekele and Leirs, 1997; Datiko and Bekele, 2014). Thus, seasonal variation is an important factor regulating populations of rodents. Temperature, energy and nutrition are most important factors in determining reproduction potential, which influences population density of rodents (Magige and Senzota, 2006).  Studies indicated that there could be seasonal, inter-annual and multi-annual fluctuations of rodent population structure (Leirs et al., 1996; Meserve et al., 1996).
Habitat structure, habitat selection, climatic condition, quality and quantity of food, fire and predation are the important factors that influence population fluctuations (Shurchfiesd, 1997; Shanker, 2001; Chekol et al., 2012). These fluctuations could be associated with the basic demographic processes such as reproduction, survival, mortality, emigration and immigration (Lima et al., 2001). Habitat heterogeneity as well as suitable vegetation coverage increases species richness, number and diversity by providing more niches, shelter and continuous supply of food that has been exploited by several species of rodents (Makundi et al., 2009; Addisu and Bekele, 2013).The quantity and quality of vegetation have been considered as prime factors that determined population size (Makundi et al., 2009).
Rodents naturally have high reproduction potential and ability to invade all habitats. This makes them to have great ecological and social values in this world. In spite of having high biodiversity of small mammals (Yalden and Largen, 1992; Bekele et al., 2003), Ethiopia is among the least studied in terms of faunal diversity and documentation, their population ecology and population structure. Studies have indicated that population structure of the rodent community in many regions of Ethiopia are still poorly known. The same is true of rodents in Alage and its environs. Country wide studies on population structure of rodents in different habitats would be important to understand relationships between species and between rodents and the environment. Therefore, this study was proposed to carry out extended ecological surveys in this area to determine population structure of the rodents with the following specific objectives: 1) to evaluate the population density of rodents in different habitats; 2) to estimate the biomass of rodents in the study area; 3) to determine age as well as sex distribution of rodents in the area.

Study area
An ecological survey of small mammals was carried out in Alage and its environs, Southern Ethiopia. It is located 215 km South of Addis Ababa along a Rift Valley bordering the two Rift Valley lakes, Abijata (10 km east) and Lake Shalla (8 km north). The area is located at 38°27’ East longitudes and 7°36’ North latitudes, with a range of altitude 1,580-1,650 m above sea level. It covers 4,200 hectare of land with an average altitude of 1,600 m above sea level. It receives bimodal rainfalls with mean annual rainfall of 860 mm. Temperature of the study area is known to fluctuate significantly; however, it mostly ranges between 16 and 29°C with mean daily temperature of 21°C.
Methods
Permanent 70 x 70 (4,900 m2) live trapping grids were established in different habitat types. Grid 1 and 2 were randomly selected from natural habitats (acacia woodland and bushland), whereas grid 3 and 4 were selected from agricultural area (maize and wheat). Trapping was made in four sessions covering different seasons. The first session data gathering was carried out from end of August to the middle of September, and the second from end of September to October. The third session data assortment was conducted in December and the fourth from February to March. The first and second trapping sessions were conducted during and at late wet season whereas third and fourth sessions were during and at early dry season of the year.
In each trapping grid and session, 49 (7 x 7) Sherman live traps were set at 10 m intervals for three consecutive days. Traps were baited with peanut butter and crushed white onions and set between 05:00 and 6:30pm in the evening. Traps were covered with grasses and plant leaves to protect trapped animals against the strong heat and cold. A Capture-Mark-Recapture (CMR) method was employed by marking toe clipping and released at the point of capture.
Traps were checked twice a day: early morning and late afternoon. Trapped animals were removed from the trap, identified and recorded on grid and trap-station number. Then after, animals were weighed, toe-clipped for coding, sexed and aged (juvenile or young, sub-adult, adult), observed for sexual condition and released at the point of capture (Bekele, 1996a; Linzey and Kesner, 1997; Alpine et al., 2003). All the external attributes such as fur colour and texture, back colour of fore and hind foot, whisker and other physical features (size and shape) were also recorded. Sampled specimens were identified to the species level. For the specimen identification, museum specimens and taxonomic charac-ters in Yalden and Largen (1992), Bekele (1996a) and Alpine et al. (2003) were used.
Data analysis
The raw data were stored and managed in excel spreadsheet. SPSS (version 15.0) statistical software was used to analyze the data. Population density was calculated for each habitat and trapping session by number of individuals of each species per hectare. Biomass is the mass of rodents in a specific area. Biomass was estimated using mean weight of each species multiplied by their density in each habitat and trapping sessions. Chi-square test was employed to evaluate the significant differences of different parameters.

A total of 684 individuals belonging to 11 species of rodents were captured by live-traps in a total of 2352 trap nights with 29.08% trap success from four trapping sessions. Trapped rodent species and their population size and weight range are indicated in Table 1. Reg-arding population size, M. natalensis comprised more than 32% of the total captures followed by A. dembeensis (23%), and M. erythroleucus (19%). The least population size was observed in G. murinus (0.2%) followed by Rattus rattus (0.9%) and Mus musculus (1.0%) in the study period. Body weights of the trapped rodent species were in the range of 5-155 g. The mean body weight of each trapped rodents’ species is also indicated on Table 1. Population estimates of rodents in each trapping ses-sion are given in Figure 1. The variation in the population size was highly significant (χ2=56.4, df=3, P<0.001) among trapping sessions. The second trapping session had the highest estimate followed by the third sessions while the first and fourth sessions showed the least population estimate. 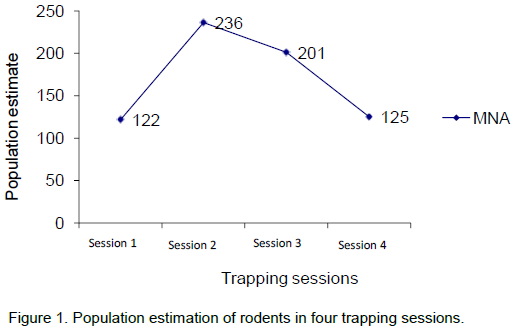 We acknowledge the Developmental Initiative Fund (DIF) and Addis Ababa University for their financial support.