Journal of
Geology and Mining Research

Wadi Halfa Oolitic Ironstone Formation (WHOIF) covers large areas around Wadi Halfa border town in Northern Sudan. The detrital framework grains of sandstone of WHOIF are composed of sub-angular to sub-rounded quartz grains followed by feldspars, lithic fragments, micas and heavy minerals. The dominant cementing materials are iron oxides, carbonate cement, and some clay minerals. Twelve block samples were carefully selected and collected from six sites to represent different parts of vertical lithofacies sections of the studied formation. The petrographical characteristics of the specimens were first studied and the specimens were then subjected to laboratory tests to determine some of their basic physical and engineering properties. The physical tests constituted unit weight, specific gravity and water absorption. The measured engineering properties included uniaxial compressive strength (UCS) and ultra-sonic pulse velocity (UPV). The UCS and UPV were measured for specimens parallel and perpendicular to the bedding planes of the studied samples. The geotechnical study shows that the UCS values of WHOIF generally range from strong 83.7 MPa to very strong 153.7 MPa for perpendicular direction to bedding planes. Very good statistical correlation coefficient was developed between UCS and UPV. Good correlation was obtained between water absorption, porosity and UPV. These relations indicated that a decrease in void ratio and porosity resulted in an increase in UCS and UPV. An increase in water absorption of sandstone yielded a decrease in ultrasonic pulse velocity and uniaxial compressive strength.

The term Nubian Sandstone Formation or Nubian Formation (NF) is applied in the Sudan to those bedded and usually  flat-lying  sandstones,  conglomerates, grits, sandy mudstones and mudstones that rest unconformably on the Basement Complex (Vail, 1978). These formations occupy about 25.7 to 28.1% of the area of  Sudan  before separation of South Sudan (Yousif, 1985). The Nubian Formation in Wadi Halfa area is known as Wadi Halfa Oolitic Ironstone Formation (WHOIF) and is composed of highly consolidated beds of sandstone, siltstone, mudstone and marked by thin beds of oolitic ironstone. The WHOIF was named based on the region of Wadi Halfa and by marked three beds of oolitic ironstone.

The WHOIF is rich in different types of clastic sediments consisting of multi-coloured sandstones which can be used as building materials and/or ornamental stones, and oolitic ironstone which could be utilized in steel industry and as industrial minerals.

Almost all the ancient buildings and pyramids in Sudan were built using the Nubian Sandstone and several large civil engineering projects are either founded on or built using products from theses formations. The knowledge of their physical and engineering properties is necessary for design and construction engineers. Studies were carried out for the determination and prediction of the physical and engineering properties of basically the sandstone and mudstone components of the NF in Khartoum state (Yousif, 1985; Elsharief et al., 2015; Abdul and Mutasim, 2018), whereas very little is known about those of the WHOIF.

The study area is one of the most remote areas in the Sudan; most of the previous studies about the WHOIF are concentrated on the general geology stratigraphy and sedimentology and did not include any geotechnical study. This is the first study that deals with the geotechnical properties of the WHOIF.

The geology of the study area

The geology of the region of Wadi Halfa is relatively simple. It consists of the oldest basement complex rocks of Precambrian age overlain by the Nubian Sandstone Formations  (Vail,  1978;  Stern  et  al.,  1994).  The  term  ''Nubian Sandstone'' was first introduced in Egyptian stratigraphy by Russegger (1837). It includes sandstone of varying ages and types overlapping the edge of the Pre- Cambrian Arabo – Nubian Shield from Algeria to Saudi Arabia. Recently sedimentological and stratigraphical studies discarded the term ''Nubian Sandstone'' and separated into several formations with local names. The long range of age time and the wide distribution to what is called Nubian sandstone become meaningless. 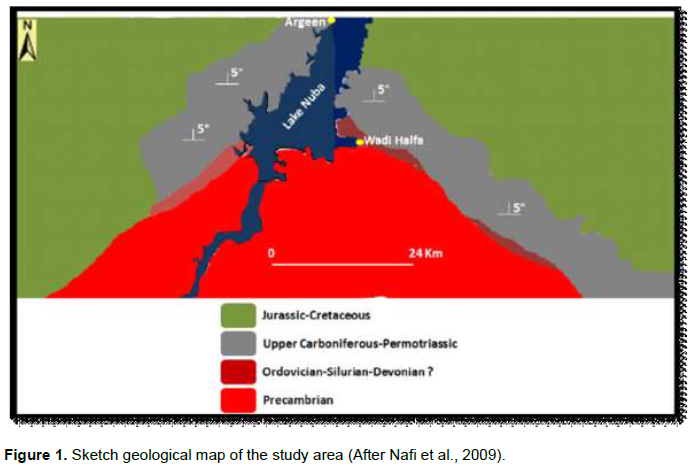 The study area is situated in northern Sudan in the vicinity of Wadi Halfa town and close to Sudan-Egypt border.

Scope of the study

In the present study, 12 large block sandstone samples were carefully selected and collected from six locations in the study area to represent the vertical lithofacies sections of Wadi Halfa Oolitic Ironstone Formation. The petrographical characteristics of the specimens were first studied and the specimens were then subjected to laboratory tests to determine some of their basic physical and engineering properties. The physical tests constituted unit weight, specific gravity and water absorption. The measured engineering properties included uniaxial compressive strength test and ultra-sonic pulse velocity.

The petrographic characteristics of the 12 selected samples were determined using Optical Polarized Microscope (PL) as well as Cross Nicol (C.N) to determine the rock constituents using Gazzi Dickinson method (1985) and to classify the sandstone according to Folk (1974).  The test results are summarized in Table 1.

The  detrital  framework  grains,  pores  and  cementing materials of WHOIF samples were calculated using the petrographic  microscope and the results are summarized in Table 2. 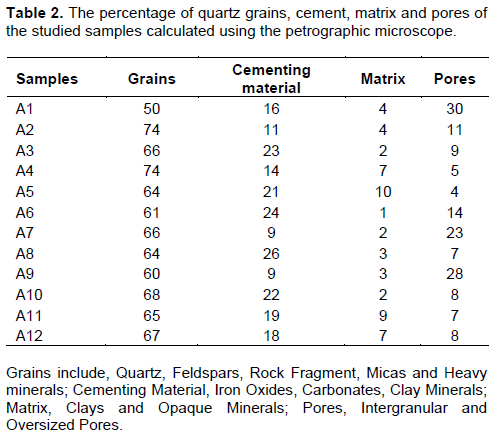 The physical property tests performed on the specimens constituted unit weight, specific gravity and water absorption. These tests were carried out for all the collected samples using test methods described in ASTM (1981) and Cheng and Jack (2009). The water absorption test is intended to measure the capacity of the tested rock  samples   to   absorb   water.   It   gives  an  indirect measure of the quality of rock materials and a basic idea about the rock strength and its water holding capacity. Summary of the test results is given in Table 3. 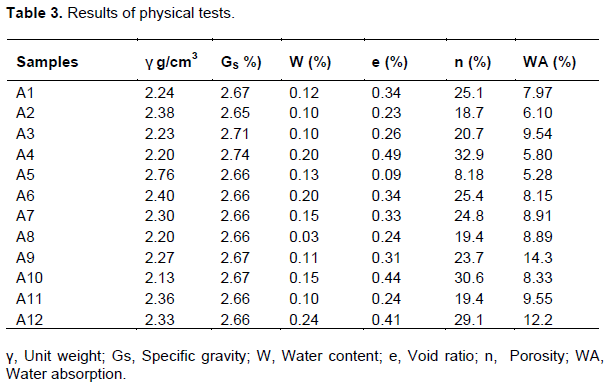 Twenty-four representative cylindrical test specimens were prepared for the laboratory tests by coring. The cores were prepared to give test specimens about 35 mm diameter and 70 mm core length, considering the orientation   of   the   bedding  planes  of   the   sandstone samples (anisotropy). For each test sample one specimen was cored in a direction parallel (0°) to the bedding plane and the other one perpendicular (90°) to the bedding plane following ASTM (2009) and Ramamurthy et al. (1993) procedures.

The ultrasonic pulse velocity was measured, for each test specimen, at room temperature in dry state according to ASTM (1995b). The UPV values were computed by dividing the length of the tested specimen by the travel time of the ultrasonic pulse. The results are shown in Table 4. 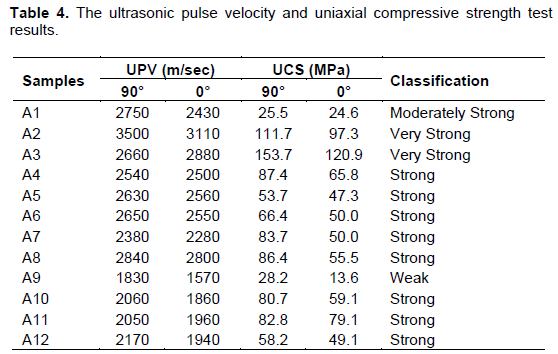 The UPV and UCS test results are presented in Table 4 for the orientations parallel (0°) and perpendicular (90°) to the bedding planes.

Table 1 presents the results of the petrographical study. The petrographic classification of sandstone samples of Wadi Halfa Oolitic Ironstone Formation according to mineral composition (quartz, lithic fragments, and feldspars) is as follows: quartz arenite 58.3%, sub lithic arenite 16.7% and subarkose 25%.

The percentages of grains, cements, matrix and pores are calculated from petrographic microscope (Table 2) to show the relationship between the strength of sandstone and the angularity of quartz grains and different types of cementing materials (iron oxides, clays and carbonates). The detrital framework grains of sandstone of WHOIF representing an average of 68% of the rock volume and composed of sub angular to sub rounded quartz grains followed by feldspars, lithic fragments, micas and heavy minerals. The main cementing materials of most of the studied samples are iron oxides, carbonate cement, and different types of clay minerals also may occur as pore filling. The cementing materials represent an average of 24% of the rock volume.

The uniaxial compressive strength is the most important engineering parameter for assessment of the strength of a rock sample. Normally, the UCS tested sample is either obtained from coring operations during rotary drilling or by coring from a representative block sample. For the first case, the sample is extracted in the direction of drilling, which is vertically downward in most cases. However, for block samples, test specimens could be obtained for different orientations. For this study, laboratory test specimens were obtained from representative block samples by coring parallel (0°) and perpendicular (90°) to the bedding planes. The UCS values obtained for the two orientations, ranges from 120 to 28.2 MPa with an average value 74.6 MPa for parallel direction and ranges from 153.7 to 13.6 MPa with an average value 83.7 MPa for perpendicular direction.

According to the results of the uniaxial compressive strength tests the WHOIF can generally be classified as very strong to strong according to classification suggested by Hoek and Brown (1997). Only samples A1 and A9 are moderate to weak.

Samples A2 and A3 measured the highest UCS (111.7 to 153.7 MPa). These samples are cemented by iron oxides and clays; whereas samples (A1 and A9) measured the lowest values of UCS (13.6 and 28.2 MPa) due to the weathering effects, high porosity (30%) and weak cementing element (carbonates). It is clear to some extent that the UCS increases with cementing material and decreases with increasing pore volume.

Compared with other rock types (Johnson and DeGraff, 1989; Lockner, 1995; Lama and Vutukuri, 1978) the sandstone  samples  of   the   studied   area   show   high compressive strength due to the high content of iron oxides and probably the presence of some clay minerals. According to Fjaer et al. (2009) the strength of medium to fine sandstone cemented by iron oxides ranges from 35 MPa to 153.7 MPa, which are similar to the sandstone of the study area. 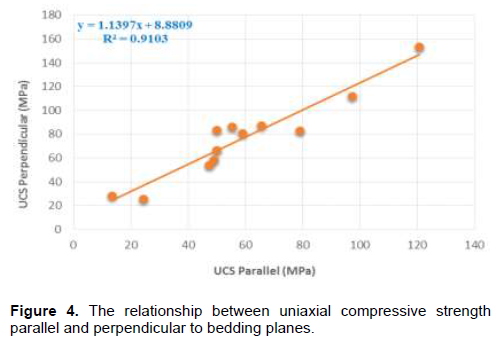 The UCS was plotted against UPV for all the tested specimens. Figure 5 shows that UCS could be estimated or predicted with very good accuracy from the UPV values for perpendicular and parallel orientations. Since the UPV is nondestructive and easy to perform its data could be used to predict the strength of the investigated Wadi Halfa Oolitic Ironstone Formation with very good accuracy with R2 = 0.992.

Porosity is an important rock parameter that measures the voids within unit volume. Porosity was plotted against UPV. Good negative correlation was found between porosity and UPV of parallel and perpendicular orientation with R2 = 0.7548. This means that porosity could be estimated with acceptable accuracy from the UPV test results (Figure 6). 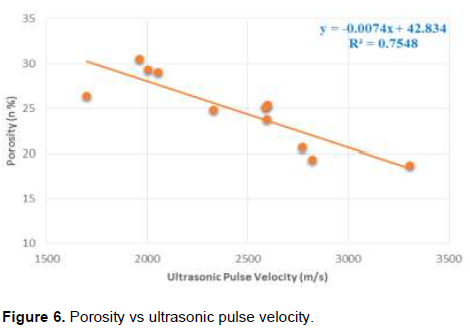 Water absorption was plotted against porosity and ultrasonic pulse velocity (Figures 7 and 8). Acceptable relationship was found (R2 = 0.5122 and 0.5536) respectively: 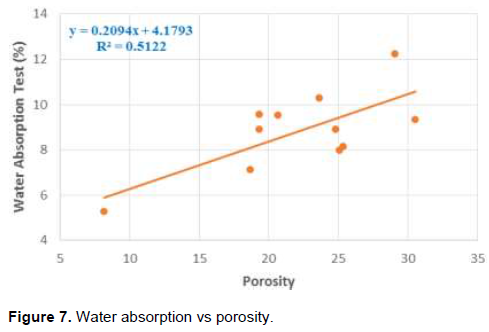 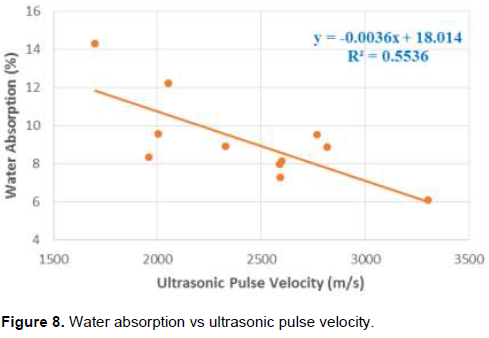 The knowledge of the geotechnical properties of Wadi Halfa Oolitic Ironstone Formation is important for engineers working on the design and construction of civil engineering projects founded on or constructed with them. According to the field investigation of WHOIF; twelve representative block samples were carefully selected to represent the investigated formation. The samples were petrographically studied first. Afterwards intensive laboratory testing program was performed on the obtained rock samples. The tests included determination of the unit weight, specific gravity, moisture content, porosity, void ratios, water absorption, uniaxial compressive strength and ultrasonic  pulse  velocity.  The compressive strength and ultrasonic velocity were measured for specimens parallel and perpendicular to the bedding planes of the studied samples. An attempt was made to develop correlation equations for the prediction of UCS, WA and porosity of WHOIF.