An increasingly present component in urban architecture, public green spaces is an essential infrastructure that has various functions. The management of these spaces poses enormous difficulties after their establishment. The study has analyzed the uses and management of these spaces in the Municipality of Sèmè-Podji. It was carried out on the basis of a sample of 84 people made up of users and managers of green spaces, heads of neighborhoods or villages, heads of districts and officials of the Technical Services Department of the Town Hall.  The thirty-three (33) green spaces still functional in the Municipality were visited.  These are unevenly distributed between the districts and that of Agblangandan has the largest number (12). The density of green space in Sèmè-Podji was 0.132 green space/km2 in 2018 against 0.02 in 2017, which remains low. Very frequented by young people (58.15%), the green spaces serve as places of leisure, rest, maintenance sports and are home to small shops.  They are managed by the town hall, by local elected officials, or entrusted to individuals who, in return, pay royalties to the municipality. Poor infrastructure coverage and maintenance which generates visual and olfactory pollution according to 97.94 and 86.90% of the target population. Besides, the lacks of innovation in the activities offered to the public are the main constraints to the management of green spaces in the Municipality of Sèmè-Podji.

The concept of green space covers a wide variety of facilities.  These can be public gardens, children's play areas, animal parks, and botanical gardens, walking circuits, fitness trails, sports stadiums and fields, family gardens, cemeteries (Muret et al., cited by Amireche, 2012:38).  These spaces meet the needs of escape, isolation, relaxation, clean air for city dwellers, a growing attraction for nature.  They are necessary for the city as a purifier of the atmosphere, a ventilator of the urban coating and essential for human life, through their beneficial influence on physical and moral health.  However, during these decades, cities have developed by ignoring the nature that surrounds them.
More sustainable cities call for the development of public spaces (green spaces, public places, parks, etc.), the management of which is often part of an urban forestry program. These infrastructures can be a tool for structuring the urban area according to the density of vegetation and their attractive capacities (Marry and Delabarre, 2011:28). In addition, beyond the scientific issue, knowledge needs are formulated by land managers and planners for optimal and balanced management of green spaces (Pullin and Knigth, 2005:1993).
Several African cities have experienced uncontrolled demographic growth in recent decades and will house 60% of their country's populations in 2025 (UNFPA, cited by Tohozin and Dossou Guèdègbé, 2014:192).  This strong human pressure coupled with space constraints is a major concern for these city managers, who are now looking for effective methods to offer city dwellers an ideal living environment while maintaining the city in its main functions (Osseni, 2013:75).  This explains the proliferation of public spaces also called green spaces.
Since their creation, these public green spaces have always been privileged leisure places in the daily life of the populations; and are in very high demand. The innumerable activities undertaken in public green spaces include commerce, relaxation, celebration, meetings etc.  A strong social unity is thus created within these places which takes into account all social categories and socio-cultural groups (Tchaou, 2014:7).  This is indeed where one usually meets strangers, where one expects to meet mostly them (Monnet, 2012:201).  Grafmeyer (2004:104), space is only public if it is open and accessible to everyone and is assigned to several functions and uses common to city dwellers.  It is a space for meeting, exchange, communication and socialization in the image of the city.
Despite the various benefits of green spaces, their establishment in the Municipality of Sèmè-Podji has not kept up with the evolution of the population and there is a spatial disparity in their distribution.  Likewise, the quality of these spaces sometimes leaves much to be desired, thus testifying to inefficient management.  The question that arises is therefore to know: what are the uses and management constraints of green spaces in the Municipality of Sèmè-Podji.  Therefore, the objective of this study is to highlight some of the uses and management constraints of the said spaces in the Municipality.

Presentation of the study area
Located between the parallels 6 º 22 'and 6 º 26' North latitude and the meridians 2 º 27 'and 2 º 42' East longitude, the Municipality of Sèmè-Podji is located in the County of Ouémé, in the South-East of the Republic of Benin on the Atlantic coast.  It is bounded to the north by the city of Porto-Novo and the Aguégués, to the east by the Federal Republic of Nigeria, to the south by the Atlantic Ocean and to the west by the city of Cotonou (Figure 1).
The Municipality covers an area of 250 km2, which is about 0.19% of the area of the Republic of Benin, and includes the Districts of Agblangandan, Aholouyèmè,  Djèrègbé,  Ekpè,  Tohouè, Sèmè-Podji.  In total, it has fifty-five villages and city districts. 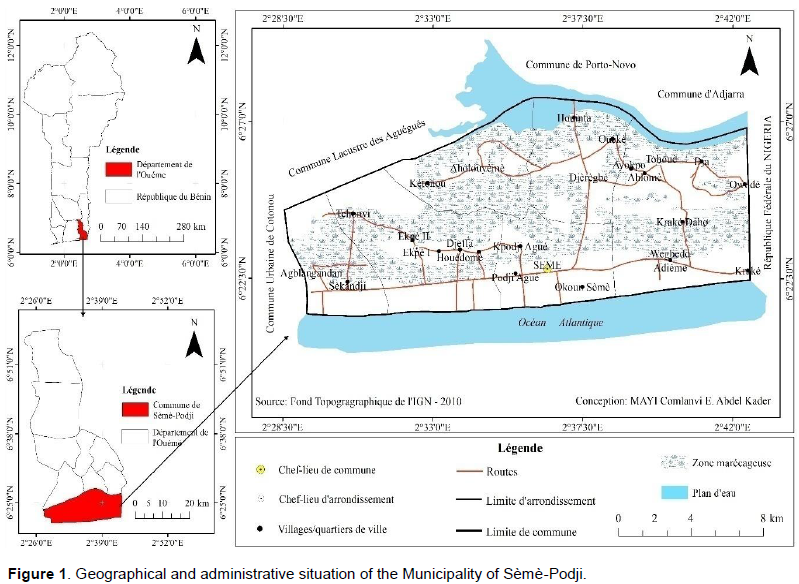 Materials
The material used consists of a topographic map of Porto-Novo from 1992. It comprises of sheets NB31XV2c and NB31XV4a at a scale of 1 / 50,000 with shape files and a cadastral plan at 1 / 10,000 from 2010. In addition, Garmin 76csx GPS (Global Positioning System) for taking the geographic coordinates of green spaces in the Municipality of Sèmè-Podji has been used.
Field survey method for a management mode of green spaces
An exploratory visit to the sites in the Municipality revealed that it has around fifty green spaces, of which only 33 are actually in use and under developed.  The research focuses on the 33 spaces.  A survey on the current management mode of green spaces was carried out among all the concerned stakeholders identified in order to be able to characterize them.  A questionnaire is administered to collect information related to the uses and management of green spaces.
A random survey method made it possible to question a sample of fifty-five (55) users of green spaces.  In addition, eighteen (18) Neighborhood / Village Heads, two (02) District Heads, seven (07) space managers and two (02) officers from the Technical Services Department of the Sèmè-Podji Town Hall were interviewed.
The examination of the survey sheets was done manually. Special codes have been assigned to each collected data in order to facilitate the groupings and analyses. The diagrams and curves were produced with the Excel spreadsheet to represent the quantitative data.  The response rate by type of information was expressed by the following formula:
With: DEv = density of green spaces in the Municipality; nEv = number of green spaces in the Municipality (33); Scom = total area of the Municipality (250 Km2).
The results of the surveys largely contributed to identifying the weaknesses in the management mode of green spaces, then the sites' attractiveness and sustainability parameters.

Urban development requires the establishment of a certain number of infrastructures (health, education, social, leisure, etc.). Green spaces are part of leisure infrastructure and therefore occupy an important place.  Every man at a given time needs rest, distraction, and leisure. Green spaces to some extent meet these needs.
Quantitatively, the Municipality of Sèmè-Podji has more green space than the city of Porto-Novo, where 13 green spaces are identified by Tohozin and Dossou Guèdègbé (2014:195), but less than Cotonou with its 70 spaces.
The present study and several other authors have shown the disparities in the spatial distribution of green spaces in the different Municipalities.
As explained by Tonde (1994:28), through its definition, the role assigned to a green space is very important. This explains its high attendance. It must contribute to improving the living environment of the populations.  As a result, green space necessarily has the following characteristics: recreational, health, educational, social, cultural and economic, contrarily to what Deverin-Kouanda (1990:7) believed that green spaces must contribute to limiting the effect of the desertification rather than establishing recreational spaces, of walking, because going for a walk in the square is a Parisian not  a Ouagalese culture.  This conception excludes the other functions of green space and, in other words, for the latter author, frequenting green spaces is more a Western than African behavior.
While this may be true at some point, the fact remains that conceptions change and these spaces now feature in all urban development plans (Somadjago and Suka, 2018:268).  As it has been demonstrated, green space allows people to find an ideal and healthy and clean place to rest. In addition, it contributes to the awakening of the conscience of the populations for a better management and the safeguard of the environment. Also, it promotes the closeness and the contact between people coming from various horizons. An adequate framework for the organization of various events (music, exhibitions, recreation, education, etc.), the green space also promotes the development of business activities that create jobs and generate income. For these reasons, the development of a green space is necessary because it helps to solve problems of employment, but it still has to be well managed.
In Benin, the law on decentralization confers on the Municipalities a certain prerogative in the management of the territory and its components and therefore green spaces. This management mode  does not differ fundamentally from that described by Osseni et al. (2015: 153) in Porto-Novo in Benin where it is the forest inspectorate, the Town Hall, NGOs and the population that intervenes in the management of green spaces.  The management model in force in Benin presents certain differences with that of Lomé in Togo where a fairly large number of actors are responsible for their management (Polorigni, 2012:58; Somadjago and Suka, 2018:271). It also differs from that of Kinshasa where green spaces are managed concurrently by four different ministries (Ngur-Ikone, 2010:16).
In Sèmè-Podji, the local authorities have delegated part of their prerogatives over green spaces to private entities made up of legal and natural persons. These private entities pay a monthly fee and use the spaces for their economic purposes. The green space must be maintained on a regular basis to continue to provide a healthy environment for populations. It must also offer a multitude of activities to its users and have certain infrastructures essential to its viability.  These criteria are far from being adopted or implemented in the Municipality because of shortfalls at all levels (infrastructural, sanitation and innovation). These findings are similar to those of Amontcha, Djego, Lougbegnon and Sinsin (2017:85) in Nokoue, Hounsou (2018: 42) in Sèmè-Podji in Benin and Bouge (2009:56) in Tourangelle in France. Indeed, the findings show that the maintenance gives more consideration to the refreshments installed on the perimeter of the spaces rather than the infrastructures (benches, lighting, plants, etc.), the sanitation, or the adequacy which the users expect. Within this context, it is first and foremost the responsibility of the municipality to rethink the development of green spaces and to effectively invest in them accordingly, with reference to the municipal development plan.

The Municipality of Sèmè-Podji has long neglected public spaces in its development process in favor of the uncontrolled expansion of buildings.  Most of the spaces in the Municipality are functional but do not always meet the expectations of the population who frequent them for entertainment, rest and other activities such as shopping.  The management of green spaces faces many challenges which must be addressed to avoid losing them, as they are being less and less visited and neglected by the population. In the face of rampant population growth and urbanization, the municipalities must become effectively involved in the restoration and development of new green spaces to provide an adequate leisure environment for their respective and healthy populations.