Urban growth is a worldwide phenomenon. It is a process which takes place rapidly to occupy the adjacent land of an area and changes in land use pattern, demographic features and transforms the economic activities of the people. Over the years, Ethiopian cities have experienced tremendous expansion which generates a great concern for urban planners. The present study used Geographic Information System (GIS), Remote Sensing and Global Positioning System technologies to identify the nature of physical expansion in Debre Markos town during 1984 – 2012. The researcher discovered that Debre Markos town population has expansion of 170.50% between 1984 and 2012. The built-up area covered 6.78 sq. kms in 1984 and expanded to 12.76 sq. kms in 2012. The town grew at the rate of 3.15 sq. kms and 3.57% annually. As per the study, built-up area has grown from 6.78 to 10.93 during 1984-2004 and 10.93 to 12.76 sq. kms between 2004 and 2012. There is an increment of 44.04% boundary from 1984 to 2012. The city has encroached lots of precious agricultural and forest land areas during the study period. In order to monitor the physical growth of the towns, the researcher recommended the need to introduce modern technologies and use of proper management techniques by urban planning authorities.

Urban areas represent built environments that are physically distinguishable from the natural environment, and are thus potentially identifiable through the use of remotely sensed sources such as satellite images, aerial photography. Nowadays, most of the world population lives in cities and metropolises. However, it is often the case that settlements grow irregularly under the pressure of masses  coming  to  cities  and  these  do  not  develop according to well-defined plans. Hence, it is necessary to monitor urban areas with frequent update.
Urbanization is inevitable when pressure on land is high, agriculture incomes are low and population
increases are excessive, as is the case in most of the become the centre of urban transition for human society. developing countries of the world. Urbanization has become not only of the principal manifestation but also an engine  of  change,  and  the   21th   century   which   has In a way urbanization is desirable for human development. However, uncontrolled urbanization has been responsible for many of the problems our cities experiences today, resulting in substandard living environment, acute problems of drinking water, noise and air pollution, disposal of waste, traffic congestion etc. To improve these environmental degradations in and around the cities, the technological development in relevant fields has to solve these problems caused by rapid urbanization. Only then the fruits of development will reach most of the deprived ones (Urbanization, 2010; available on: http://en.wikipedia.org/wiki/Urbanization).
The modern technology of remote sensing which includes both aerial as well as satellite based systems allows us to collect lot of physical data rather easily, with speed and on repetitive basis; GIS helps us to analyze the data spatially, offering possibilities of generating various options, thereby optimizing the whole planning process. These information systems also offer interpretation of physical (spatial) data with other socio-economic data, and thereby providing an important linkage in the total planning process and making it more effective and meaningful. Recent technological advances made in domain of spatial technology cause considerable impact in planning activities. This domain of planning is of prime importance for a country like Ethiopia with varied geographic patterns, cultural activities etc. The purpose of using GIS is that maps provide an added dimension to data analysis which brings us one step closer to visualizing the complex patterns and relationships that characterize real-world planning and policy problems. Visualization of spatial patterns also supports change analysis, which is important in monitoring of social indicators. This in turn should result in improving need assessment (Rahman, 2006).
Ethiopia, like many of the developing countries, has a problem with urban expansion and the growth of population in the main cities and towns. For example, over the last decades Debre Markos, the capital of East Gojjam has significantly expanded due to different development activities and migration of people from rural sites. Various changes have occurred in the town but there are no regularly updated maps to indicate those changes. In general, it should be interesting to study and observe the urban growth of Debre Markos town in recent years. Therefore, Debre Markos town was chosen for this study to generate urban spatial database using Remote Sensing, Geographical Information System, and Global Positioning System technologies to help present and future generations. Thus, this research paper is generally an intention to identify the expanded areas in and  around Debre Markos town.

METHODOLOGY OF THE STUDY

For the purpose of monitoring the physical growth, pattern detection and mapping this study utilizes different methods for data collection, data analysis and presentation. Among these, participatory mapping, GIS and RS techniques were the main techniques. In addition, GPS instrument was used to collect recent ground control points from the field.
Study area
Debre Markos, the capital of East Gojjam Administrative Zone is located in the North- west of the capital city of the Federal Democratic Republic of Ethiopia, Addis Ababa at a distance of 300 Kms and 265 kms to the capital of Amhara Nation Regional State Bahir Dar. The geographical location of the study area is located between 10°17′00′′ to 10°21′30′′ N Latitudes and 37°42′00′′ to 37°45′30′′ E longitudes and its elevation ranges in altitude from 2350-2500 meters above the sea level.  The town has 1380 mm average annual rainfall and minimum and maximum temperatures of 15 C and 22 C respectively (Debre Markos Town Administration, 2011).
The area is dissected by three swampy areas (mainly flood plains) and to some extent ridges, escarpments, and streams associated with gullies. There are three main major slope categories that can be classified, according to the document obtained from the town municipality office.
1. Land with 0-2.5 percent slope: this area refers to the swampy areas which cover 20% of the total urban land.
2. Land with 2.6-20 percent slope: land with this slope class constitutes 75% of the area of the town. This is suitable for settlement and other functions.
3. Land with > 20%: this refers to the land characterized by gullies, ridges and escarpments which account 5% of the land resources (Debre Markos town municipality, 2009).
The town is bounded by two woredas. In the East, it is bounded by Aneded Woreda and the remaining three directions (to the West, North and South); it is bounded by Gozamen woreda. The total study area has an estimated area of 30.5 square kilometers. The location map of the study area is shown in Figure 1. 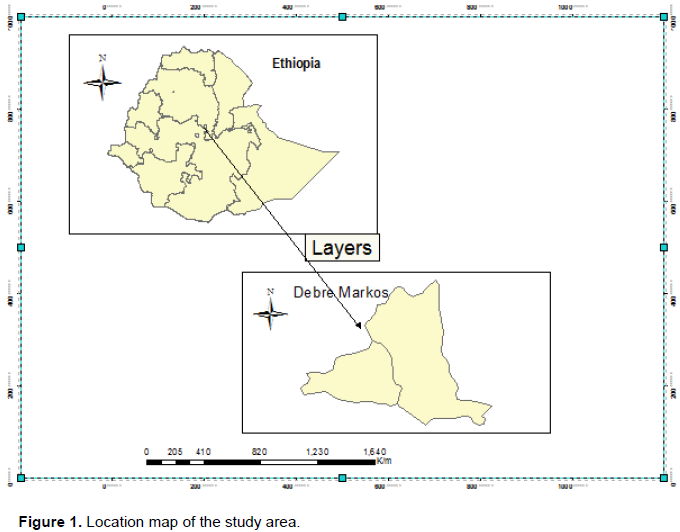 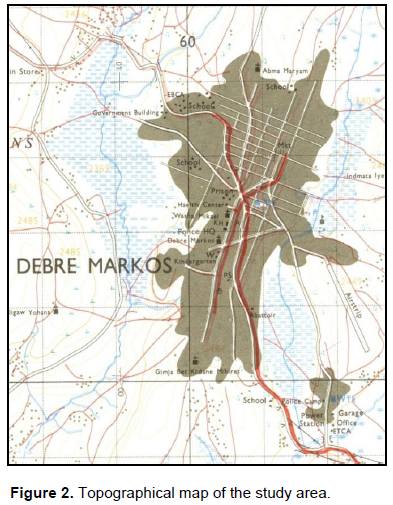 Figure 3 shows the methodology of the study. The researcher used different data acquisition methods to collect data from the field. In this study, satellite imagery of 2004 and topographical  map of 1984 were registered or geo-referenced. Debre Markos town’s boundaries and major roads were digitized with using ArcGIS 9.2 software. GARMIN 60 GPS instrument was used for field survey to gather recent information (2012) on town’s boundary. The recent boundary map of Debre Markos town was generated by using DNR Garmin software. Finally, all the digitized maps were overlaid to know the physical expansion of the town during 1984 – 2012 (Figure 4). 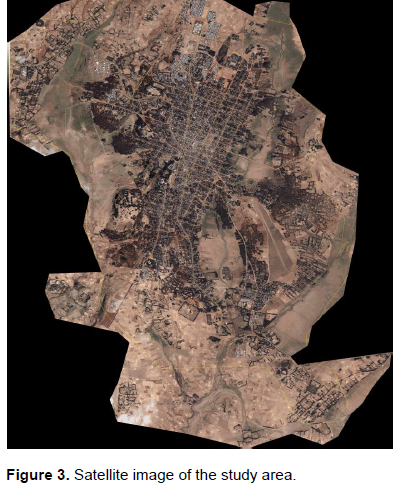 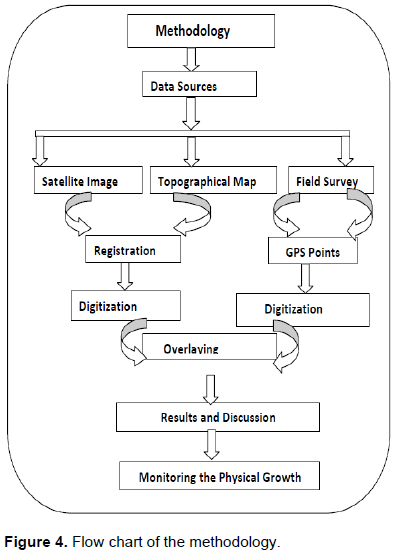 Physical status of the town in 1984
In 1984, the urban area of Debre Markos town was 6.78 square kilometers with  a  population  of  39,808  and  the total length of the city boundary was 21.5 km. The town has stretched from the North to South direction. National highway number three from Addis Ababa to Gondar is passing through the center of the town. Figure 5 shows built-up area of the town in 1984. 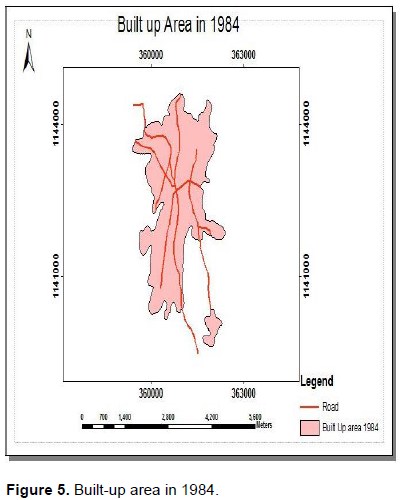 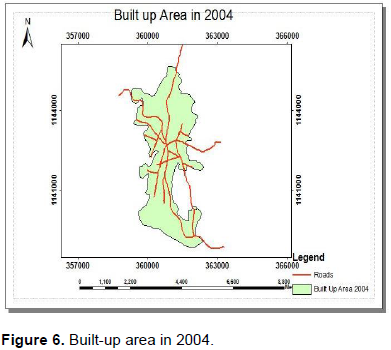 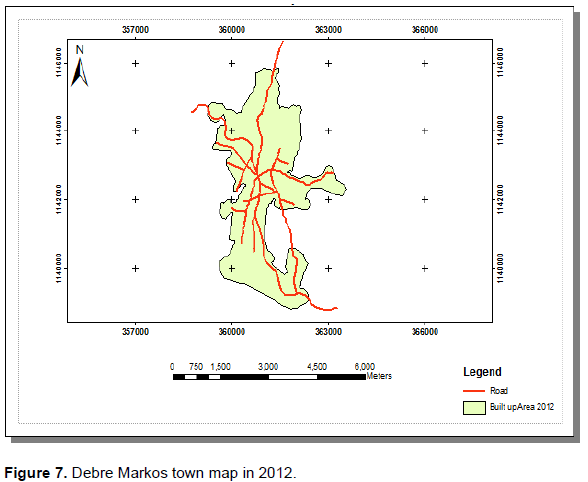 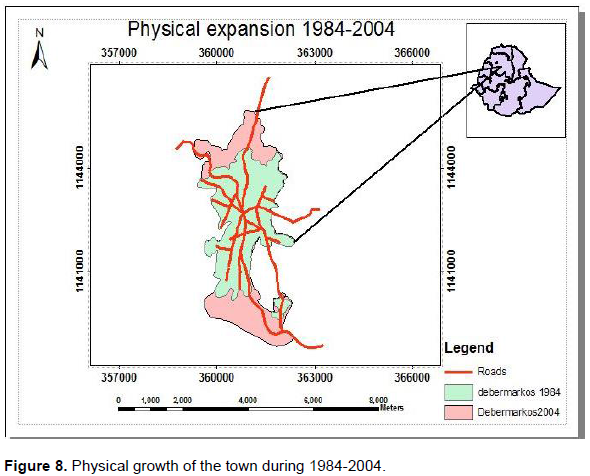 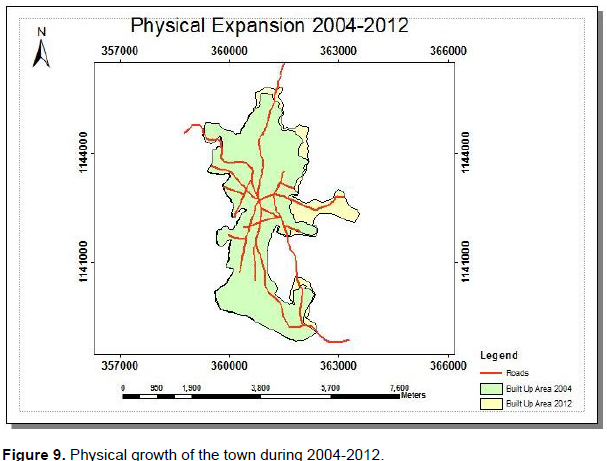 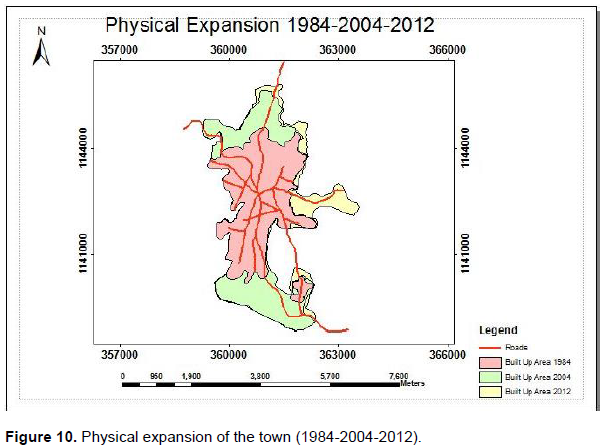 The physical growth of urban centre is a contemporary phenomenon in developing countries like Ethiopia. Over the years, Ethiopian cities have experienced  tremendous expansion which generates a great concern for urban planners. During the study period, the town experienced the positive growth rate in area as well as population. The area  of  the  city  increased  from  6.78  to  12.76 sq. kms and almost it is doubled within 28 years. On the other hand, the population of the city grew from 39808 in 1984 to 107684 in 2012 shows 67876 increment within a span of 28 years.
As per the study, built-up area has grown from 6.78 to 10.93 during 1984-2004 and 10.93 to 12.76 sq. kms between 2004 and 2012. There is an increment of 44.04% boundary from 1984 to 2012. The minimum and maximum expansion of the town was noticed during 2004 – 2012 and 1984 – 2004 respectively.
The researcher discovered that Debre Markos town population expansion of 170.50% between 1984 and 2012. The town grew at the rate of 3.15 sq. kms and 3.57% annually. The city has encroached lots of precious agricultural and forest land areas during the study period. Therefore, Planners need the whole data and information of a map and information related to these aspects for perspective planning and management at the edge of Debre Markos town. Hence, there  is  need  to  create  an information system of Debre Markos city to overlay, analyze and create various planning scenarios for decision making. Global Positioning System (GPS), Remote Sensing (RS) and Geographic Information System (GIS) are appropriate tools for creating such type of information system. Urban planning authorities need to explore the use of remote sensing, geographical information and global positioning system technologies for monitoring the physical growth of the towns. This would provide support to planners in development of planning. Cities growth and developments are to be mapped, stored and displayed so as to understand whether they are maintaining sustainability or not. The acquisition of recent satellite images need to be introduced for monitoring the activities of developers. This will help in reducing unplanned urban spread out and the associated loss of natural surrounding and biodiversity. There is a need to encourage and plan for balanced growth in our cities. This is  to  be  achieved  by marking some areas for growth and environmental protection. The growth management legislations need to be introduced at various levels of governments to identify lands with high natural resource, economic and environmental value and protect them from development.