Waste management authorities have adopted different strategies at different times in managing waste in Nigeria. In spite of the various efforts put in place, municipal solid waste remains one of the most conspicuous and repugnant environmental problems that threaten the Nigerian city. This paper examines the challenges and opportunities of Public-Private Partnerships (PPP) in residential solid waste management in Ibadan, Nigeria. Data for the study were obtained from the Oyo State Solid Waste Management Authority (OYOWMA). Findings revealed that the commonly-generated wastes were organic wastes and there existed a mismatch between waste generation and collection. Between 2012 and 2015, city waste managers collected and transported 2,411,145.78 metric tonnes of waste to the four dumpsites in Ibadan. The dumpsites’ locations were sub-optimal, surrounded by sprawling neighbourhoods due to inadequacy in urban planning and enforcement of development control. This has adverse effects on the well-being of residents. Municipal solid waste management is capital-intensive and the decline in budgetary allocations to waste management necessitated the PPP user-charges arrangement. This intervention notwithstanding, indiscriminate dumping of wastes continued to be cheap means of disposing of solid wastes, with implications for drainage system and flooding. Waste sorting, recycling and conversion should be given adequate consideration and the informal waste managers should be mainstreamed into the urban waste management architecture.
Key words: Private waste contractors, Oyo State Solid Waste Management Authority, residential solid waste, informal waste collectors, dumpsite, Ibadan.

Ibadan is located in south-western Nigeria, about 130 km in land northeast of Lagos and 530 km southwest of Abuja, the federal capital. The city is a prominent transit point between the coastal region and the areas in the hinterland of Nigeria. In 2006, the National Population Commission (NpopC) put the population of Ibadan at about 3 million. At present, the national population growth rate is 3.18% and the city’s population was estimated to be 3,565,108 in 2018 (World Population Review, 2018). The rate at which the population of Ibadan is growing has significant implications for solid waste generation. As the city is rapidly expanding in area and population, the residential solid waste management issue has become a major urban environmental problem.
The responsibility for solid waste management in the city currently lies with the Oyo State Government, Ministry of Environment and Water Resources, Oyo State Solid Waste Management Authority (OYOWMA) and local governments. Each organ of government has different roles and responsibilities. In terms of waste management, OYOWMA is the statutory body established in 1997 by the state government to undertake waste collection, processing and disposal (Wahab and Ola, 2016). It has the direct and operational responsibility for residential solid waste management in the city. The Ministry of Environment and Water Resources performs a supervisory role over the Oyo State Solid Waste Management Authority. The Oyo State Solid Waste Management Authority is charged with the responsibility of collecting wastes along major roads, markets, inner city areas and other areas not covered by private waste contractors. Prior to Edict No. 8 of 1997 establishing OYOWMA, municipal solid waste collection and disposal were undertaken by the Ibadan Solid Waste Management Authority. The authority was functioning under the Ibadan City Council and later when Ibadan Municipal Government was created, the responsibility was transferred to Ibadan Municipal Council. Later, Ibadan city and its environs were constitutionally divided into eleven local government areas (LGAs) to shoulder the responsibility of collecting, transporting and disposing of municipal solid wastes (Omoleke, 2004; World Bank, 2017). The idea of involving the private sector in residential solid waste management started in 1985. According to Cointreau-Levine (1994), the collection service by licensed private contractors was initiated in 1985 when private franchise of residential waste collection in high-income residential layout areas was implemented.
The data for this research were obtained from secondary sources and they were mainly quantitative. Data were collected from published and unpublished documents of OYOWMA and from the 11 LGAs that constitute the Ibadan region. Information on the number of registered private waste zones and routes covered (Figure 1), mode of operation, frequency of waste collection, time of collection, service charges and quantity of waste collected and transported to dumpsites and maintenance procedure of the dumpsites were obtained from OYOWMA and registered private waste contractors (PWC). A reconnaissance survey was conducted to validate the data obtained from OYOWMA, LGAs and the private waste contractors. Additional data on the PWC were sourced from the records of the Association of Refuse Contractors and the exiting literature. The Master Plan of Ibadan and the Map of Ibadan Region were used to identify the routes, residential neighbourhoods and zones covered by private contractors. Data were analysed using descriptive statistics, with the results presented in map, tables and chart. 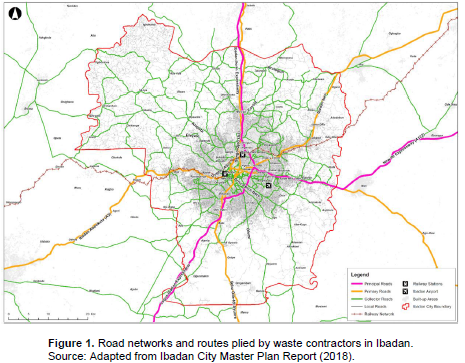 The responsibility for residential solid waste management in Ibadan lies with the public and private sectors, but the public sector still remains the dominant actor. The role of the private sector in residential solid waste management has not been significant. With public-private partnership, the collection, transportation and disposal of residential solid waste should be efficient but this is not the case in Ibadan where refuse collected from one area is deposited somewhere else within the city or at open dumpsites. Despite various efforts aimed at managing wastes in Ibadan, the residential solid waste problem still remains one of the most conspicuous and repugnant aspects of environmental problems in the city. The major challenges facing PPP in residential solid waste are limited budget and equipment; improper locations of solid waste containers; the capital-intensive nature of solid waste transportation; and inadequate capacity to handle the increasing amount of residential solid waste generated. While the locations of the open dumpsites serving the Ibadan metropolis are sub-optimal, informal waste pickers have been recognised by OYOWMA across these dumpsites. High levels of poverty, harsh economic condition and unemployment have motivated waste scavengers to embark on waste sorting and recycling. Informal waste businesses will not only play significant roles in employment creation, but they will also reduce crime and government expenditure on security and legal services.

The authors are grateful to the anonymous reviewers for their enlightening, constructive and useful comments on the manuscript.