This study is a survey of urban roads and on-street parking in Niger Delta Region- Yenagoa, Bayelsa State. The study generated data with the aid of physical measurements, traffic and volumetric counts. Descriptive and inferential statistical tools were utilized for the data analysis. The results showed that road widths were narrow and could not accommodate on-street parking. Tested hypotheses confirmed that the width of roads and the number of parked vehicles were strongly correlated (r=0.73, P<0.01). The volume of traffic counts and the number of parked vehicles were also strongly correlated (r=0.89, P<0.01). The study therefore recommended traffic management techniques such as vehicle parking regulations and control, and the provision of off-street or multi-storey parking facilities.

Parking is an essential component of the transportation system. Vehicles must park at every destination (Litman, 2013). With the dramatic increase in automobile use, parking has become an integral part of the modern urban setting and an important land use, and that is why parking spaces are noticed when absent on roads (Manville and Shoup, 2005). The reason why parking in general is an absolute necessity for planning a road network is because urban roads and streets are places where people meet, walk, do their shopping and engage in a diverse array of social and recreational activities (Dumbaugh and Gattis, 2005).
However, on-street parking is associated with urban roads (Still and Simmonds, 2000) and most urban roads in Nigeria cities are narrow, lacking pedestrian lanes and there are cases of double parking alongside illegal  street parking along these narrow roads thereby affecting traffic flow in the city. This is due to lack of off-street parking facilities along the transportation routes coupled with inadequate traffic management (Asiyanbola and Akinpelu, 2012; Olurunfemi, 2013).
Parking space for vehicles is a major challenge in cities and has been increasing in both developed and developing countries because it links the urban transportation infrastructure, land administration, land-use management and urban planning (Rodrigue et al., 2016). In some cities, vehicles looking for on-street parking (cruising for parking) have created mobile queue of cars that are waiting for curb vacancies (Shoup, 2006). Shoup (2006) describes cruising as invisible and most transport economists and planners have neglected it as a source of congestion. Car users are more  likely  to  drive around and look for an on-street parking space, instead of off-street parking because on-street parking space could be cheap while off-street parking space could be expensive (Shoup, 2006).
In Yenagoa, the capital city of Bayelsa State Nigeria, urban roads are expected to be traffic routes whose primary function is to convey traffic within the urban area and also provide ample spaces, which have already proved insufficient. The indiscriminate parking along streets within the urban core is a serious impediment and there is indication of lack of adequate attention to this aspect of transportation. Therefore, this study surveys urban roads and on-street parking in Yenagoa, Bayelsa State of the Niger Delta region in Nigeria with the objective to assess the adequacy of urban road width to accommodate on-street parking and also assess the impact of on-street parking on urban traffic flow.

The theoretical framework for this study (Figure 1) is based on urban land-use theories, and location of activities such as residential, commercial, industrial, administrative and recreational centres. The volume and direction of traffic flow to this location of activities varies because of its functions for example commercial, industrial and administrative area will generate more traffic than residential and recreational area. Each type of urban activity has its own mobility requirements that are serviced by urban transport infrastructures (Newman and Kenworthy, 1999).
The location of activities influences the volume and direction of traffic flow thereby resulting in the increase of vehicles on urban roads along those areas where activities are located. Since very vehicle must park at its destination, the demand for parking now comes to play, and this raises the question of adequacy of urban road width to accommodate on-street parking and the impact of on-street parking on urban traffic flow to those location of activities. On the basis of the above discussed it is traffic volume and the number of parked vehicles. 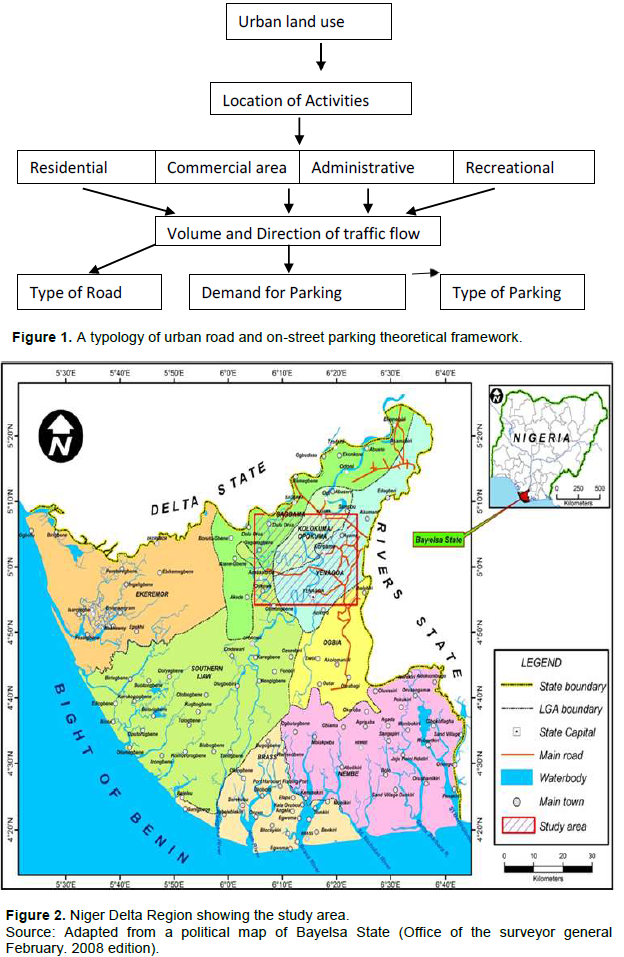 The study area is Yenagoa capital city of Bayelsa State, Niger Delta region of Nigeria which comprises of 20 communities (Figure 2). The cross-sectional survey design was adopted in this study. This includes descriptive, explanatory and exploratory design to describe each of the many variables necessary for the study. The population for household survey comprises the head of households along the 120 roads within the 20 communities in Yenagoa. Out of the 120 roads in Yenagoa city, only 40 are arterials. To get the required number of roads for sampling in the study, Yamane (2007) simplified formula was used, Equation 1.

n = the sample size, N= the population size, e= the level of precision.
By using 20% precision and 40 identified arterial roads in the study area using Equation 1, we have approximately 16 arterial roads. Therefore, by simple random sampling technique sixteen urban roads (arterial roads) were selected from the selected communities. A sampled size of 10,688 parked vehicles was determined through volumetric count from the sixteen randomly selected arterial roads.
Volumetric count and physical measurement survey
Volumetric count was carried out to obtain information on the number of parked vehicles on the street and for two-way traffic volume of the following vehicle types namely: cars, minibus, trucks, sport utility vehicle, pick-ups and vans on a daily basis for sixteen weeks. Physical measurement of road width of the sixteen arterial roads/streets was carried out to obtain the width of each of the roads/streets under study. The count for both parked vehicles and traffic volume was done between the hours of 7 - 9 am, 1 - 3 pm, and 5 - 7 pm on a daily basis for the sample sixteen arterial roads/streets for the period of sixteen weeks. The widths of each roads/streets under study were measured using meter rule as the instrument for measurement (Figure 3). 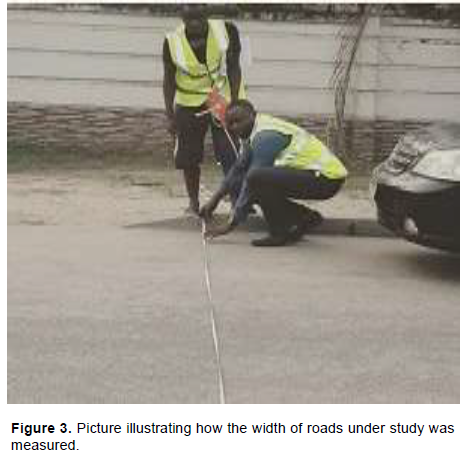 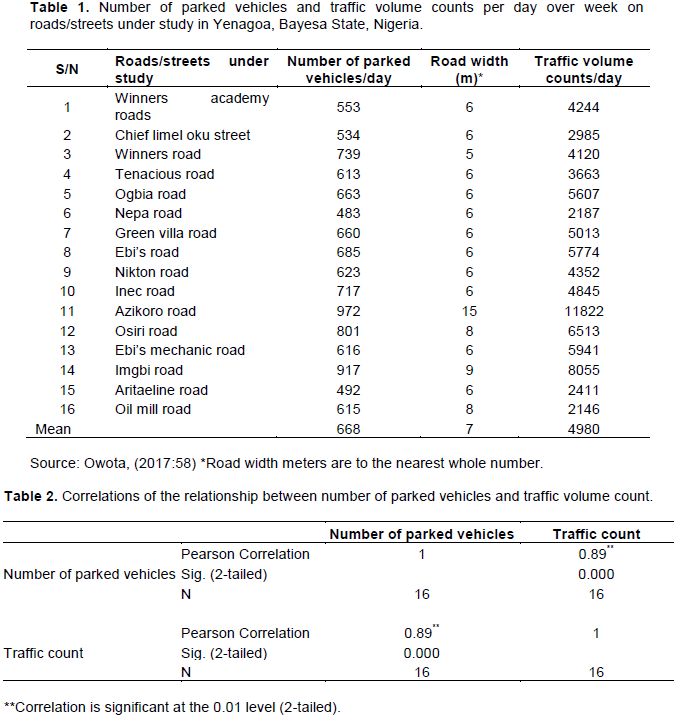 The findings of the study reveal that roads/streets in most of Yenagoa urban areas are not wide enough to accommodate on-street parking since most of their width is less than 8 m which is the standard width of an urban road. This also revealed that the narrow nature of roads/streets in Yenagoa is as a result of poor construction and design coupled with inadequate set back from structure/building by developers. The findings also reveal the relationship between the width of the roads/streets and the number of parked vehicles, this implies that as the number of parked vehicles increase, the width of roads/streets need to increase to accommodate more parking space. If the width of the roads is not increased there will be problem of parking space as noted by Raji and Waziri (2008) in their research with the findings that says an increase in number of vehicles without adequate infrastructure (off-street parking facilities), has accentuated the problems of traffic congestion, traffic delay, parking problems, accident, and urban land use severance.
Sumaila (2012) carried out a study concerning the current and emerging transportation problems in Nigeria’s Federal Capital Territory and came out with the following results which include non-development of transit ways to major activity centres, emergence of illegal bus stations, poor parking system and absence of pedestrian walkways. This study confirms the result of the presents study. The findings of this study confirm that traffic volume and parked vehicles have a strong positive relationship that leads to traffic congestion. The parking vehicles on the roads/streets reduce the vehicular access for free flow of traffic, vehicles plying that route need to slow down especially when looking for where to park. There is a confirmation to this important finding by Downie (2008) which say that parking is another contributing factor to congestion. It is of the view that parking on the road, which consumes large amount of space has become a land issue that greatly inflates the demand for urban land, causing congestion in cities.

Owing to the findings of this study the following have been recommended:

(i) The state Government and local Planning Authority should specify and enforce the provision of parking space into any building (commercial, residential or administrative) before approval. This will reduce the currents challenges of on-street parking on urban roads and forestall future occurrences;

(ii) In Yenagoa city, most of the roads/streets are not up standard in width, which creates problem for easy vehicular movement. The government normally proceeds by road expansion whenever there is problem of traffic congestion caused by parked vehicles. For this present study, the adoption of traffic management techniques such as one-way traffic system, vehicles parking regulations and controls including the construction of off-street or multi-storey parking facilities will help in reducing the challenge of on-street parking along the roads/streets in Yenagoa.

Author would like to appreciate Prof. Stanley I. Okafor and members of staff of the Department of Geography and Environmental Management, Niger Delta University for their support and also the anonymous reviewers for their useful suggestions.