Data for this study was derived from both primary and secondary sources. Purposive sampling technique was adopted for the study in which all the six public tertiary institutions were selected (University of Lagos (UNILAG), Lagos State University, Ojo (LASU), Adeniran Ogunsanya College of Education (AOCED), Lagos State Polytechnic (LASPOTECH) Yaba College of Technology (YABATECH) and Federal College of Technology.
Pilot survey revealed that there were twenty two (22) cooperative societies in the selected public tertiary institution in Lagos state (5, 6, 5, 3, 2 and 1 respectively in UNILAG, LASU, AOCED, LASPOTECH, YABATECH and Federal College of Technology, Akoka) (Table 1). To determine the size of the sample, a famous formula referred to as ‘Yard’s formula’ was used. It is expressed mathematically as:
n= N /1+N α2
Where   n =  desired   sample    size; N =  population  size;  Α  =maximum acceptable margin of error = 0.05 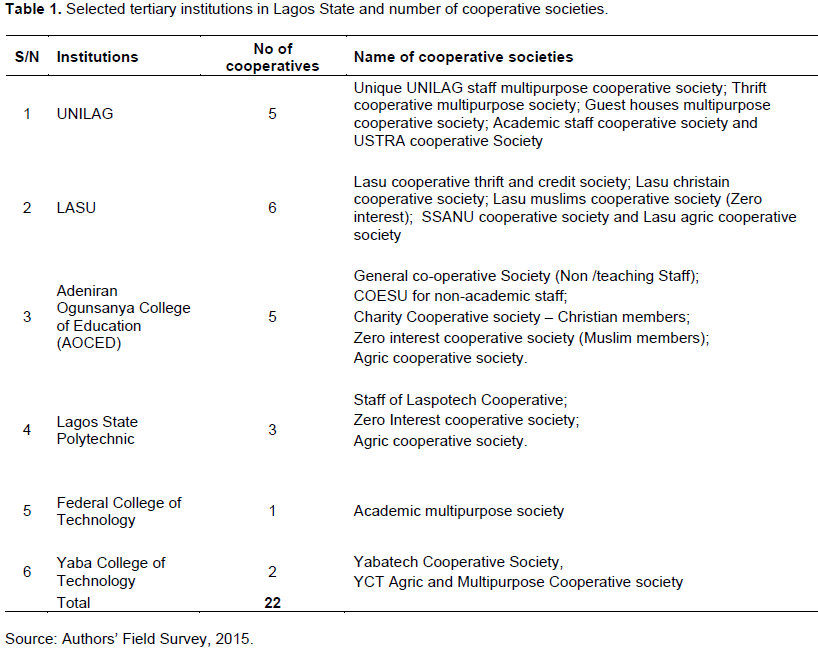 Therefore, in determining the sample size, the researcher made use of estimated population of one hundred and thirty-five (70) respondents from the co-operative societies in tertiary institutions in Lagos State.
n=? N = , α= 5%=0.05; n= 135/1+70 (0.05)2; n= 135/1.375; n= 50.90; n= 50.90 respondents
Therefore, the sample size used on the basis of the calculation is 50.90 respondents. However, in order to give room for error margin, the researcher made use of 50 respondents. Hence, a sample size of fifty (50) executive members of the co-operative societies in the six (6) selected public tertiary institutions in Lagos State were used to represent the entire population of the respondents. The reliability analysis used SPSS software to evaluate the independent variables on the dependent variable. The result shows that reliability scale test for the items of the questionnaire score is 0.944 (Cronbach’s Alpha). This thus affirmed that the research instrument used for the study is reliable as it is more than the least accepted reliability score of 0.7. Meanwhile, only forty-four (44) questionnaires was completed and returned for analysis. 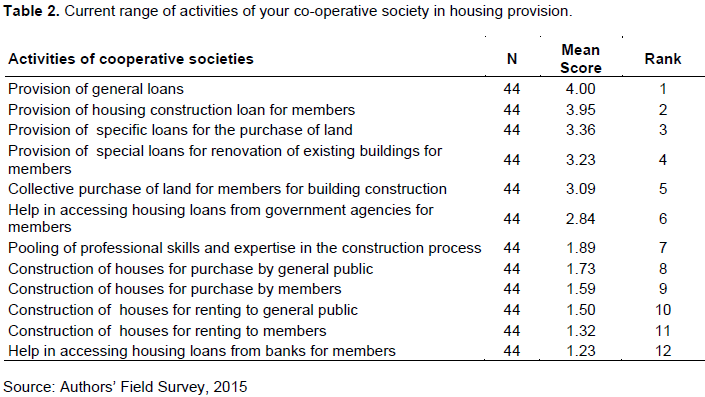 Inaccessibility to finance by mortgage bank is causing the barrier to housing provision ranked 5th with mean of 1.61; several cooperatives have had difficulties in sourcing funds from financing institutions. One of the hitches is the need to raise large sums of capital and at the same time incur the liability to pay interest on borrowed capital. This makes financing for cooperative housing development a major challenge due to insufficient financial resources. High dependency on foreign building materials is a major problem ranked 6th with mean of 1.50. This corroborates observations made by Ogunsemi (2010) and Adedeji (2007) that high cost of building materials is a bane to housing delivery in Nigeria.
To this extent, it can be deduced that the afore-mentioned are barriers the co-operative societies in the study area encountered in the provision of affordable houses and this affects their ability to satisfy such desires of the members.
Measures implemented by cooperative societies to remove the constraints of housing provision
Table 4 shows information on the measures implemented by co-operative societies to ameliorate the barriers to housing provision for members in the study area. Removing installment increment in building cost by ensuring collective construction whereby materials are purchase in bulk ranked 1st with mean of 3.68, this implies that when materials for housing construction are built in bulk it tends to reduce the cost. Acquiring building materials directly from the manufacturers thereby subsidized financing costs for members ranked 2nd with mean of 3.09, using collective in-put of member skills in the construction process ranked 3rd with mean of 2.59, accessing funds from the state government through the collective interest of the members ranked 4th with mean of 2.18, this has been found effective in America where 17% of the total number of rent-reduction housing units in America are cooperatives and where its growth has been attributed to the high government support it gets through direct funding and legislation. Using collective interest of the members to access loans from mortgage banks ranked 5th with mean of 1.91. This is seen by members as the least measure to remove the constraints of affordable housing provision by the cooperative societies in the study area because studies have shown that mortgage financing in Nigeria is not well developed.

The focus of this study was on evaluation of the different constraints of affordable housing and developing different measures to ameliorate these constraints. The study indicated that cooperative societies have provided housing loan to a substantial number of its members enabling them to purchase land and own their personal houses. It further shows that type of construction methods and materials of construction makes housing to be expensive and unaffordable to the members. The issue of bureaucracy in accessibility to finance is another constraint to affordable housing provision by the cooperative societies in the study area.
Consequently, government programmes could systematically address the issue if only it were sustained with the support of dedicated recurrent funding. These concerns the problems encountered in sourcing land and financing construction. Also, there should be a direct involvement of the government in the bureaucratic process of land allocation and putting up financing facilities to enable cooperative societies to be considered without stringent conditions.

The authors have not declared any conflicts of interest.