A comparative analysis of residential quality of public and private estates in an urban centre of Lagos, Nigeria: A case study of Iba Estate in Ojo and Unity Estate in Alimosho

In recent years, most of the urban centers in Nigeria are fast experiencing housing problems such as unaffordable housing and environmental challenges, all of which determine the nature of housing quality. This research centers on Iba Low Cost Housing Estate, Ojo and the Unity Low Cost Housing Estate Alimosho to carry out a comparative analysis of the residential quality. The research reveals the dilapidated state of the public estate infrastructures due to poor management, thus recommended constant upgrading of infrastructures in the estate and an establishment of local housing trust funds for the development of affordable housing to reduce the pressure on available ones.

Housing is defined as the total residential neighbourhood/ environment or micro district including the physical structure, all necessary services, facilities and apparatus for the total health and social well-being of the individual and family (Salau, 1992). It is seen as the physical environment in which the family and society’s basic units must develop. Housing structures are enclosures in which people are housed for lodging, living accommodation or even work places. It is considered as one of the most basic of human needs. As  a  component of the environment, it has a reflective influence on the health, efficacy, social behavior, satisfaction and general welfare of the community (Onibokun, 1998).  To most people, housing means shelter but to others it means more as it serves as one of the best display of a person’s standard of living and his or her place in society (Nubi, 2008). It is of great importance to attain a living standard and is important to both rural and urban areas.   The demand for housing knows no limits as population growth and urbanization increase very rapidly, thus causing supply deficit. In developing countries, poor housing delivery is accredited to inadequate mechanisms and systems for land apportionment, funding, mortgage institutions and infrastructure (Nubi, 2008). Despite the significance of housing, adequate supply remains an illusion to all cadres of Nigerian society, which has been a recurrent feature in most developing countries. The proportion of the Nigerian population living in urban centers has however increased drastically over the years. While only 7% lived in urban centers in the 1930s, and 10% in the 1950s, by 1970, 1980 and 1990, 20, 27 and 35% lived in the cities respectively (Okupe, 2002). According to Okupe (2002) over 40% now currently live in urban centers of varying sizes. This has created severe housing difficulties, resulting in overcrowding in inadequate dwellings and results to the spring up of shanties, and in a situation in which 60% of Nigerians can be said to be “houseless” (FGN, 2004). The aim of the research is to appraise the residential quality in Lagos metropolis using Iba housing estate, Ojo, and Unity Estate in Alimosho as the study areas, to achieve the aim, below are the objectives:
(1) To examine the demographic and socio-economic attributes of residents in the study area.
(2) To examine the residential quality delivery in the study area.
(3) To analyze the level of variation in residential quality of the two estates,
(4) To propose policy implication of the findings of the study.
Study area
Lagos is one of the Federal Republic of Nigeria (2007) 36 states, notable for her population and commercial activities, and is located in the southwest. It lies approximately between longitude 2°42'E and 3°42'E and latitude 6°22'N and 6°52'N. The Atlantic coastline of about 180km forms the boundary at the south, to the west it is bounded by Benin Republic and Ogun State in the northern and eastern part by Ogun state. The state possesses one of the largest urban agglomerations, having an explosive growth rate of 5.7% annually; growing 2,000 inhabitants averagely daily, which decipher into population growth of about 275,000 persons annually; and a population density of 2,594 persons per sq. km. The state’s population at present is estimated around 21 million dwellers (Fashola, 2012, cited in Daily Independent, 2012). However, the location for the study areas are Iba Housing is situated in Ojo and Unity Housing Estate in Alimosho local government areas of Lagos (Figure 1 and 2). The study area is Ojo LGA, located at 6°28'N 3°11'E to the south Ojo is Iyagbe and Ikum-Ibese. To the West are Agbara and Badagry. To the east are Satellite and Festac towns, and to the  north  are Igando and Ejigbo. Due to the closeness of the area to the ocean, the area enjoys coastal weather conditions. 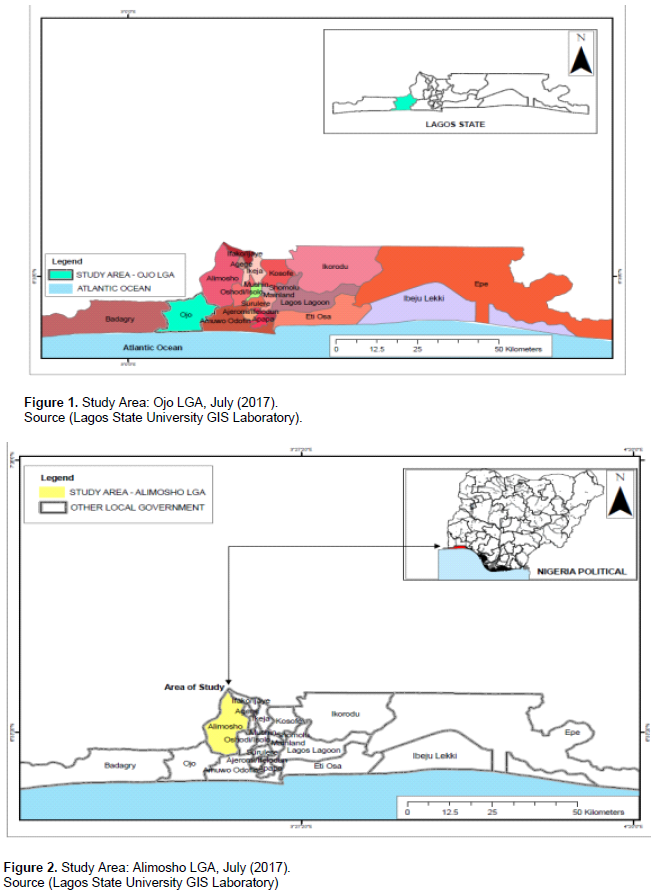 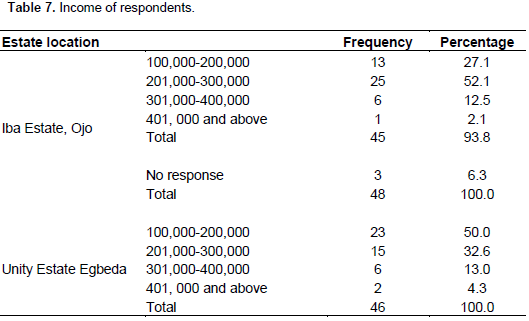 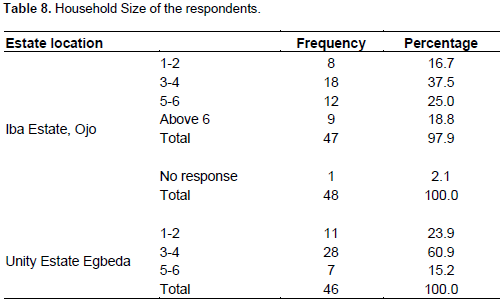 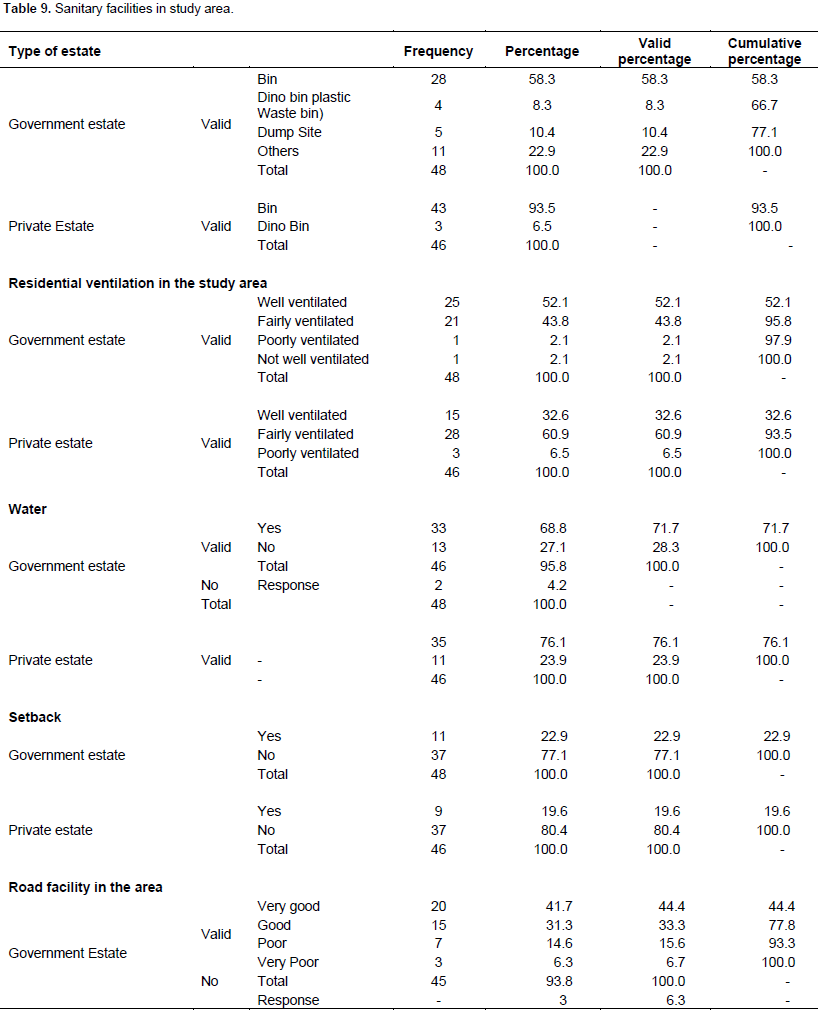 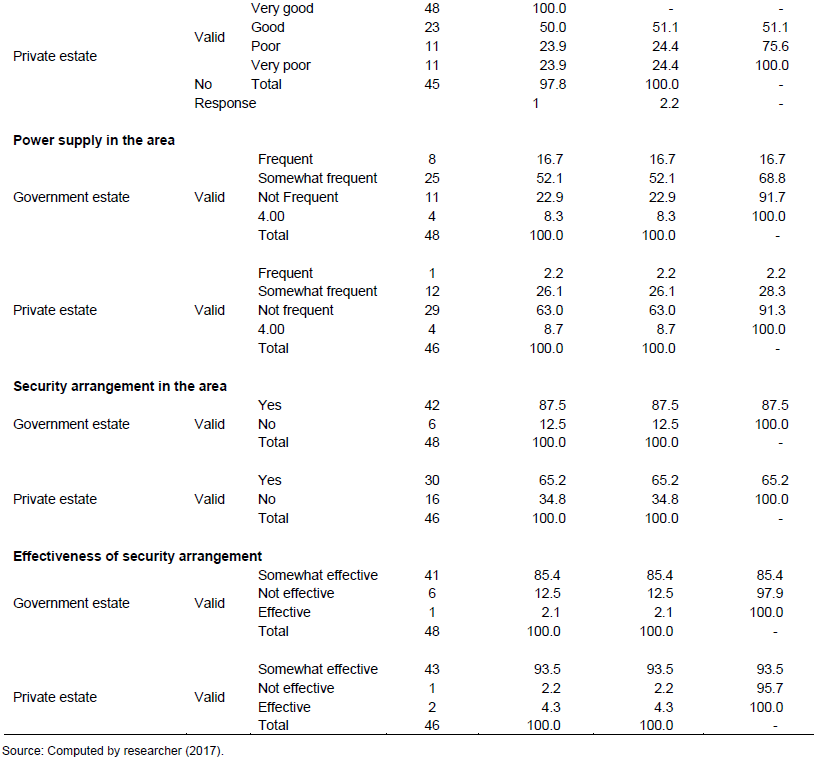 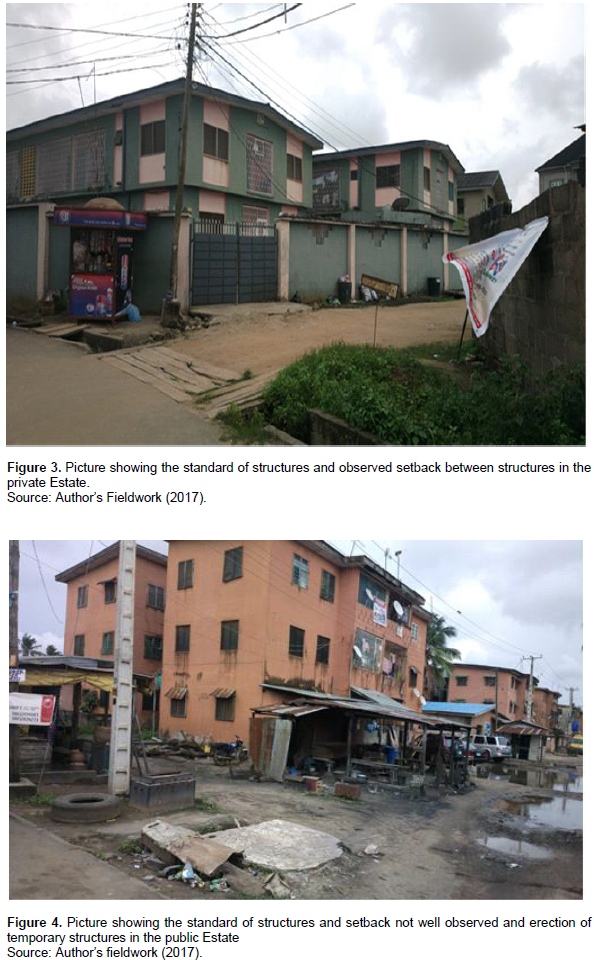 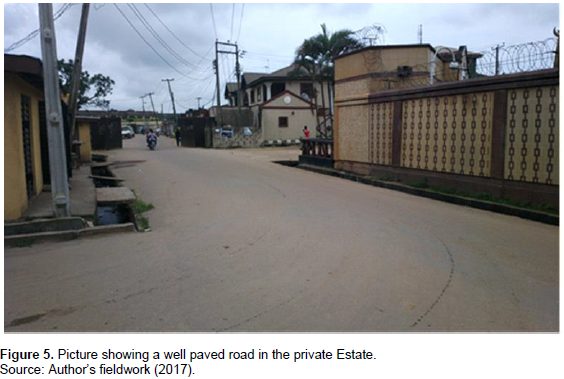 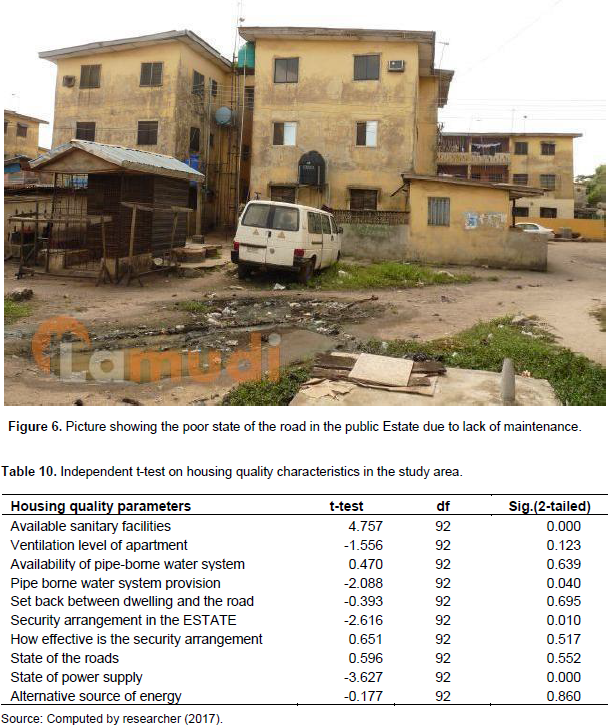 After appraisal of both estates under study, the research thus revealed privately owned estates have the highest ventilation level than public estates. Also sanitary facilities in government estate were found to be of higher quality than in the privately owned estate. The characteristics of the setback observation in the two estates reveal that government estate observes setback than privately owned estates, in the public estate the building do not observe a uniform distance between buildings and the access roads as the estate  utilizes  the setback for the construction of shops and temporary structures, the private estate have a minimal number of temporary structures.  Also private estates have better security arrangement, both in terms of number and effectiveness unlike the public estate that has a porous border and gate, which makes  the  estate  prone  to  late night harassment and robbery, meanwhile report shows that most of the miscreant do not reside in the estate, but were able to gain entering due to poor security arrangement. The study further reveals the characteristics of the infrastructures and facilities such as roads and power supply arrangement  and  its  effectiveness  in  the two estates varies and the variation suggests that the private estate has better road infrastructure than the government-owned one, as majority of the roads in the government owned estate are not properly maintained as majority of the respondents complained of ineffective community development service, which has resulted to neglect of the road. There is steady power supply in both estates,  which  presumed  is  because  of   the   revenue generated from the resident in terms of power supply. Public housing programs in developing countries has been constantly criticized  for failing to provide quality, affordable and adequate housing units to target population (Mukhija, 2004). Studies however reveal that Lagos state governments is not surrendering in their efforts at addressing the problem and providing adequate,  affordable  and  sustainable  housing  through the continual improvement in the state housing program.

In view of the foregoing, the researcher postulates the following:
(1) There should be establishment of local housing trust funds for the development of affordable housing, as the research reveals so much pressure on the available facilities in the estates due to non-availability of substantial housing scheme.
(2) Community development service should be put to work in the public Estate, as many of the facilities in the estate are in dilapidated state, such as the road, as many are of the opinion that Government property belongs to no one.
(3) There should be periodic upgrade of facilities in the public estate, such as the sanitary facilities, as they are all in dilapidated state.
(4) Security should be held in high esteem in both estates, there is high level of porosity which makes the estates exposed to intruders.
(5) There should be an implementation of inclusionary zoning, reserving a specific percentage of housing units for lower-income households in new developments and making them affordable.
(6) Employer assisted housing programs, through employee home ownership incentives should be introduced so the general public will not only depend on the public estate.
(7) It is necessary to assess the capacity of the private sector in order to determine their eligibility for involvement in the establishment of new estates in order for the new estate developers to have a set standard.
(8) It is however important to embark on more researches in order to understand the mechanism through which the private sector can be held accountable to deliver on quality housing, so there motive will not only be to exploit the citizens.
(9) Provision of quality enabling environment for the private estates developer  to operate, which will involve the support of the private sector by public involvement in form of incentives, new mode of operation and new set rules to moderate the operation between the private sectors and the inhabitant.
(10) Low income estates are aimed at providing shelter to the common masses, rich men should not be entitled to buy from the houses. Houses should be built to beneficiaries’ specifications and should be sold to them only. This calls for the involvement of the beneficiaries in the planning and implementation of the program.
(11) Direct government provision of housing is required to provide for the needs of the low income and disadvantaged groups.
(12) The National Housing Fund like we did mention must serve the purpose for which it was created and the mortgage institutions must operate with low interest rate in giving out loans.
(13) Land ownership policy and documentation in the country should be reviewed with all seriousness.
(14) Periodic upgrading of social facilities in the estates should be done, not until when they are in shambles.