Quince (Cydonia oblonga Mill.) belongs to the Maloideae subfamily of the Rosaceae family, which includes commercially important fruits such as apples and pears. This subfamily comprises ap­proximately 1,000 species in 30 genera and is char­acterized by a distinctive fruit, pome, and a base chromosome number of 17 (Rodger and Campbell, 2002). Quinces have originated in Persia, Turkistan and the Caucasus. The quince tree shows high genetic variability, the following authors studied the genetic variability problem in this species (Scaramuzzi, 1957; Onofrio et al., 1998; Rodrigues-Guisado et al., 2009). Some of the Iranian authors studied the within-species variability of the leaf structure of quince genotypes (Abdollahi and Ghahremani, 2011; Khoramdel et al. 2013). According to Abdollahi et al. (2013), Quince genotypes from the North of Iran with most similarity to the wild ancestors demonstrated low fruit quality, late to very late fruit maturity and high fruit set. These genotypes also clustered as the most dwarfing and showed the lowest level of leaf chlorosis in calcareous soils. Our hypothesis was that leaf mineral compositions differ among selected quince genotypes from different parts of Iran within the same stand and that these differences are under genetic control. Hence, vector analysis was developed for nutritional diagnosis purposes (Timmer and Stone, 1978; Timmer and Amstrong, 1987). Vector diagnosis involves deficiency comparing nutrient (compares) concentration, nutrient content, and biomass of plants in a graphic format known as a vector nomogram. Plant tissues are sampled and usually compared to a control or reference. Based on the magnitude and direction of vectors describing response to treatment in terms of these three variables, analysis can be used to diagnose nutrient status: sufficient, deficiency, luxury consumption, excess and dilution (Garcia et al., 2005).
In this study, we examined the mineral nutrition of 28 quince genotypes by determining leaf levels of elements and diagnosing this nutrition by vector analysis and also selecting quince genotypes that possess desirable characteristics for ability to use in breeding projects, for example, propagations of quince genotypes which induce a higher tolerance to iron.

Plant material and experimental site
The plant material used in this investigation belonged to the breeding programs of Iranian National Quince collection from different parts of Iran (Isfahan, Khorasan Orumia, Ardebil, Astara, and Tehran) during 2006-2009. All selected quince genotypes were budded on quince seedling rootstocks in 2012, and then grown under the same environmental conditions in nursery of Seed and Plant Improvement Institute.
Plant sampling and analysis
In the present work, leaves were sampled from twenty eight quince genotypes which were selected from Central, Central-North, North, North West and North East regions of Iran. The leaf samples were dried at 75°C for 72 h and ground to pass a 40-mesh screen, and their mass was measured. The nitrogen content estimated by the Kjeldahl method. Ca, Mg, Fe, Zn and B were determined by atomic absorption spectrophotometry. P was analyzed by the molybdovanadat method. K was analyzed by flame photometry [Association of Official Analytical Chemists (AOAC) 1980]. Nutrient concentrations in leave and fruit tissues were expressed on a dry weight (DW) basis.
Statistical analysis and data interpretation
The experiment was conducted in a Randomized Complete Block Design with 3 replications. The statistical evaluation was done by using analysis of variance (ANOVA). This paper would use SAS statistic computer system to calculate the surveyed data and means were evaluated using Duncan’s multiple range test at P=0.05. The relationships between studied parameters were evaluated by Pearson’s correlation coefficients at P ≤ 0.05. Vector analysis was used to compare leaf dry weight, nutrient concentrations and nutrient content (Timmer and Stone, 1978; Imo and Timmer (1997); Weeetman and Fournier, 1982; Garcia et al., 2005). Each point on the vector analysis represents the magnitude and directional shift of each nutrient from the control. Distance from the control represents the responsiveness of the studied genotype for the nutrient being analyzed. Figure 1 shows a schematic of the approach for added nutrients. A detailed description of vector analysis can be found in Weetman and Fournier (1986) and Hasse and Rose (1995). 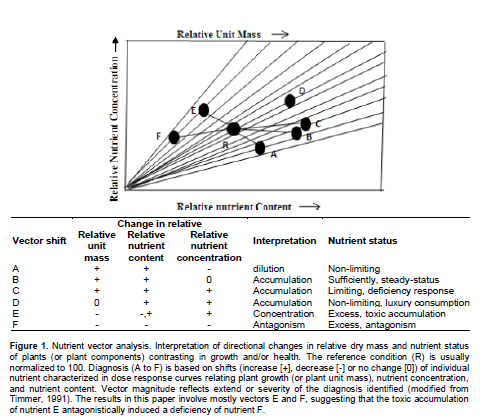 ANOVA results showed that there were significant differences (p≤0.01), between studied quince genotypes in respect to the all studied traits (Table 1). The results suggest that estimated variations of studied leaf B-content was slight, but statistically significant. The highest variability was estimated for the leaf P-content (10.56), and the lowest for leaf B-content (0.26). The results of the leaf nutrient content, leaf dry matter taken are shown in Table 2. Leaf dry weight (0.48 g) was highest for the genotype Sahelborgmoghavem. The leaves of genotype KVD1 had the highest amount of leaf N-content (4.88%). The highest value of leaf P-content (0.27%) belonged to Shai. The highest amount of leaf K-content (4.45%) belonged to ASP1. The leaves of genotype ASP2 had the highest amount of leaf Zn-content (71.94 ppm). The highest value of leaf Ca-content (2.36%), leaf Mg-content (1.57%), leaf Fe-content (57.48 ppm), leaf B-content (80.69 ppm) belonged to NB2 (for Ca-content), Moghavem2 (for Mg-content), ASM3 ( for Fe-content) and NB4 ( for B-content), respectively. Simple correlation analysis showed significant negative and positive correlations between studied characteristics of selected quince genotypes from different parts of Iran (Table 3). Positive correlation was observed between leaf Zn-content with leaf N-content (P < 0.001; R2 = 0.497). In contrast, there were negative significant correlations between leaf Mg-content with leaf Ca-content (P < 0.001; R2 = -0.559), leaf B-content with leaf Zn-content (P < 0.01; R2 = -0.466) and leaf Fe-content with leaf dry weight (P < 0.01; R2 = -0.384). We also observed negative significant correlation between leaf Fe-content and leaf dry weight. Vector analysis has been used to interpret plant nutrient status and nutrient shifts (dilution, deficiency, excess, etc.) of studied quince genotypes. In our study, reference point for calculating and comparing the relative change of the three parameters (nutrient concentration, nutrient content and leaf dry weight) for studied quince genotypes was the average value of tissue concentrations, content of nutrient and leaf dry weight which were normalized to 100% to allow comparison on a common on a base. The nomograms show upward, right, - and left-pointing of N, - P, - K,-, Ca, - Mg, - Zn, - B, - and Fe-vectors associated with all of studied quince genotypes, except of "Esphehanoghaf", compared to the control. The "Esphehanoghaf" showed downward of all studied nutrient as compared to the control (Figures 2 to 9). 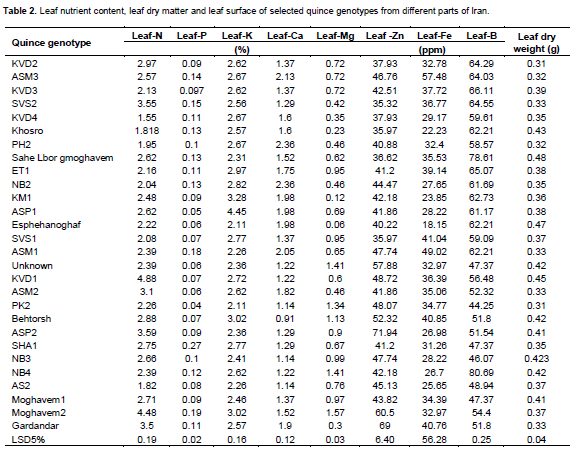 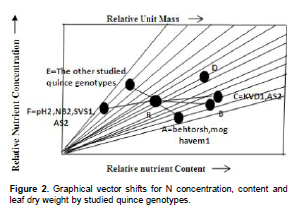 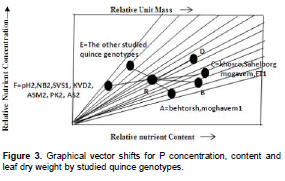 Vector analysis for Behtorsh, ET1 and ASP1 displayed a C" deficiency shift for foliar k. N dilution effects or “A-Shifts” for foliar k was observed in KVD1 (Figure 4). ET1 and ASP1 displayed a C" deficiency shift for foliar Ca, relative to control values. “A- Shifts" relative to the controls were shown for Khosro and Esphehanoghaf (Figure 5). Mg deficiencies, a “C-shift”, were observed for ET1, unknown, Behtorsh, ASP2, NB3, NB4 and Moghavem1, relative to the control (Figure 6). Nutrient vector analysis showed a “C-shift", of Zn for unknown, Behtorsh and ASP2. KVD1 and NB3 showed a Zn dilution “A-Shift” (Figure 7). KVD3, Sahelborgmoghavem, ASP1, NB4 and ET1 expressed B deficiency “C-Shifts’ relative to the control. B dilution effects, an “A-Shift”, were observed on Khosro, Esphehanoghaf (Figure 8). Fe deficiency “C-Shifts” were also produced by KVD3, ET1and Behtorsh relative to the control. Fe dilution effects, an “A -Shift”, on the Sahelborgmoghavem, KVD1, and Moghavem1 were observed, respectively (Figure 9). Vector analysis diagnoses of foliar response revealed excess “E-shifts’ behavior of all studied nutrient, as compared to the control, in the genotype ASM3. Steady-status “B-shifts” and Luxury consumption “D-shifts” behaviors were not shown by any off studied nutrient among studied quince genotypes. Excess ‘E-shifts’ and Antagonism “F-shifts” behaviors were presented by most of studied nutrient among studied quince genotypes. 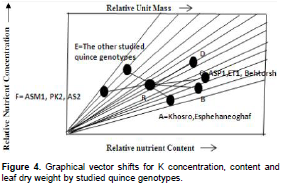 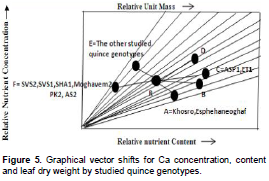 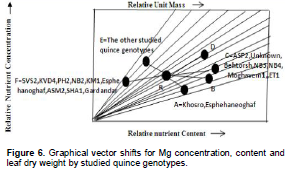 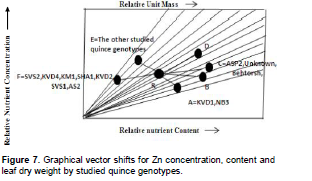 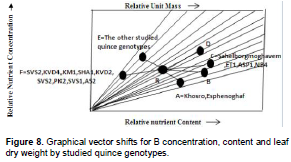 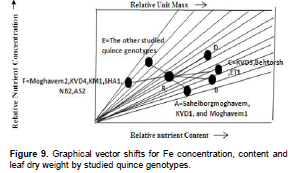 The results suggest that estimated variations of all studied parameters were significant. The highest variability among genotypes was estimated for leaf P-content (10.56%). Somewhat lower variability was obtained for the leaf Zn-content (8.67%) and leaf dry weight (6.3%). These quantitative differences illustrated intra species variability of parameters studied among studied quince genotypes. According to Castro-Diez et al. (1997), the within-species variability of leaf morphology and nutrient may improve plant performance, allowing species to maintain their fitness in resource availability. Also, our results of the leaf nutrient content, leaf dry matter taken is shown that leaf dry weight (0.48 g) was highest for the genotype Sahelborgmoghavem and the lowest for the genotype KVD2 (0.31g). The leaves of genotype Esphehanoghaf had the lowest amount of leaf K-content (2.11%); leaf Mg-content (0.06%) and leaf Fe-content (18.15ppm), respectively. In similarity to Prado and Vara (2011), we have also observed negative significant correlation between leaf Fe-content and leaf dry weight. Plant nutrient test results have been shown to vary between different species or even between different ecotypes of the same species-interior (Van den Driessche, 1984; Kaufmane et al., 2002, Bussoti et al., 2000). Vector analysis in leaves, which used leaf dry weight values and the content and concentration of nutrients in selected quince genotypes, enables the interpretation of the nutritional status of studied plants to be assessed by taking as reference the average value of three parameters (tissue concentrations, content of nutrient and leaf dry weight) which were normalized to 100% to allow comparison on a common on a base.
However, any diagnosis obtained with the method cannot, strictly speaking, be generalized. It can only conclude that there are signs of deficiency, excess, antagonism, etc., compared with a reference treatment and if a different treatment is used as reference other conclusions might be reached (Garcia et al., 2005). Figure 1 demonstrates the application of the vector analysis method of Timmer and Stone (1978). In our case, the vectors for the most of studied nutrient among quince genotypes showed a general excess and antagonism values compared with control. In addition, Steady-status” and Luxury consumption were not shown by any of the vectors of studied nutrient among quince genotypes.

Our results approved the intra species variability of foliar nutrient response due to genetic variability among 28 quince genotypes, which were selected from different parts of Iran (during 2006-2009) and after budding on quince seedling rootstocks in 2012, grown under the same environmental conditions in nursery of Seed and Plant Improvement Institute. This information enabled to select quince genotypes possessing desirable characteristics for possible use in breeding projects. Our result demonstrated that propagations of quince genotypes Sahelborgmoghavem, KVD1, and Moghavem1, which Fe dilution effects on these genotypes were observed, seems to respond well in Clay-loam soils which induced chlorosis.