Tomato leaf miner, Tuta absoluta (Meyrick) is a pest of Solanaceae crops, particularly tomato (Lycopersicon esculentum (Miller)) and potato (Solanum tuberosum Linnaeus) in the world. There are different records on the biology of T. absoluta in the world mainly due to variations in temperature and relative humidity. In Ethiopia, night temperature is very low and day temperature is very high. Due to this reason, it is expected that the biology of T. absoluta is somehow different from what was so far recorded elsewhere. Hence, the biology of T. absoluta was studied at different temperatures and relative humidities under laboratory and glasshouse conditions for two consecutive seasons. In the experiment, developmental stage, adult longevity, fecundity and ovipositon period were recorded. T. absoluta female laid about 60.56% of her egg on the upper side surface of tomato leaf, while the lowest (0.85%) was laid on tomato stem. The highest number of eggs of 233.75±14.42 was laid at 20.5±2°C and 55±5% R.H., whereas the lowest number of eggs (177.5±9.26) was laid at 32.0±2°C and 40±5% R.H. Considering the life cycle and longevity of adult T. absoluta, the results revealed that at 20.5±2°C (55±5% R.H.), no significant (P > 0.05) difference was observed between laboratory and glasshouse conditions in the case of complete life cycle. The life expectancy of adult was high at low temperature and low at high temperature. As temperature increased (20.5°C and above), developmental time of the moth appeared to decrease.

Tomato, Lycopersicon esculentum (Miller) (Solanaceae), is one of the most economically important crops in Ethiopia. Various insect pests are reported to attack tomatoes worldwide (Lange and  Bronson,  1981).  Some of the pest species are known to be of great economic importance; among them are the tomato leaf miner, Tuta absoluta (Meyrick) (Lepidoptera: Gelechiidae) and tomato fruit  borer,  Helicoverpa armigera (Hubner) (Lepidoptera:  Noctuidae), which are very serious insect pests of tomato plants.
Tomato leaf miner, T. absoluta (Meyrick) is a native devastating pest of South America, particularly to tomato, L. esculentum (Miller) (Desneux et al., 2010; Gontijo et al., 2013). It may be described as an intercontinental pest. Although T. absoluta is an endemic neotropical pest, it has acquired a wider geographical distribution after its unintended introduction in other tomato production regions since its first detection in Europe in late 2006 (Urbaneja et al., 2007)
Over the past decade, a substantial amount of research in South America has addressed a wide range of topics related to T. absoluta biology, ecology, impacts and management. Since its unintentional introduction from Mediterranean region through Sudan to Ethiopia, this invasive pest has devastated indescribable thousands hectares of tomato crop. It is considered to be one of the most important Lepidopterous pests associated with tomato, in Ethiopia (Gashawbeza and Abiy, 2013). Larvae of this insect are known to feed on the leaf mesophyll tissue expanding miners, and fruits of the crop with subsequent reduction of the yield. It has a high reproductive rate, where the female lays 260 eggs during its life (EPPO, 2005) on tomato plants. Few authors have studied the life tables of T. absoluta on tomato plants (Miranda et al., 1998; Pereyra and Sànchez, 2006; Aksu and ÇÄ±kman, 2014; Erdogan and Babaroglu, 2014). It has become an increasingly important pest in Ethiopia when information on its biology was discovered, even in its native range which was scarce. From the perusal of the literature, this work is the first in Ethiopia on the Ethiopian strains of T. absoluta reared on tomato host plant. Therefore, the objective of the present work is to study the biology and oviposition of T. absoluta on the tomato plants under laboratory and glasshouse conditions.

The biology of T. absoluta on tomato was studied under laboratory and glass house temperature; 20.5±2°C and 55±5% R.H. in the laboratory and 32.0±2°C and 40±5% R.H. in the glasshouse. T. absoluta larvae were collected from the fields and brought to the laboratory and glasshouse. The tomato leaf miner larvae present on these collected tomato leaves were wrapped with wet cotton kept in plastic box (20 x 15 cm2) in the laboratory and glasshouse. After the emergence of the adults, cages were prepared under glasshouse and laboratory. Newly emerged adults were collected from the ovipositing female of laboratory culture and placed on the tomato plant in the cages.
Adult T. absoluta used in this study was obtained from the culture maintained in the laboratory with temperature and relative humidity, under natural light. Ten pairs of T. absoluta from this stock culture were sexed and released into a rectangular box cage (1× 0.6 m). T. absoluta was maintained in the glasshouse. A mixture of sugar, yeast and water was placed in a Petri dish as a food supplement in the cage for adult T. absoluta. Everyday, temperature, relative humidity, number of eggs, larva, pupa and oviposition period per females, sex ratio and longevity of female and male were recorded both under laboratory and glasshouse conditions.
Life table construction
The number of alive and mortality of T. absoluta in all the stages was recorded daily. The following assumptions were used in the construction of the life-table of T. absoluta.
qx= [dx / lx] x 100
Where x = Age of the insect in days; lx = number of survival at the beginning of each interval; dx = number dying at age interval; qx = mortality rate at age interval x calculated using the following formula
ex = Tx/ lx
ex = Expectation of mean life remaining for individuals of age x. Life expectation was calculated using the equation:
Lx = lx +1 (x + 1)/ 2
To obtain ex, two other parameters Lx and Tx were also computed as follows:
Lx = The number of individuals alive between age x and x + 1  calculated by the equation.
Tx = lx + (lx + 1) + (lx + 2)………………..+ lw.
Where lw = The last age interval; Tx = the total number of individual of x age units beyond the age x obtained by the equation.
Developmental stages of specific life table
Data on stage specific survival and mortality of eggs, larvae, pupae and adults of T. absoluta were recorded from the age specific life-table. x = Stage of T. absoluta; lx= number of survival at the beginning of the stage x; dx = Mortality during the stage indicated in the column x.
The data calculated through the above assumptions for computing various life parameters such as apparent mortality (Am), survival fraction (Sf), mortality survivor ratio (MSR), indispensable mortality (IM) and K-values were calculated according to Arshad and Parvez (2010).
Data analysis
All the necessary data were recorded and analyzed with calculated means of days. Data collected were subjected to analysis of variance (ANOVA) to determine the significance differences among the treatments using SAS Programme version 9.1 (SAS, 2009). Life table analyses were calculated according to Jackknife’s method (Sokal and Rohlf, 1995).

Eggs laying positions of T. absoluta on tomato plants
Results showed that oviposition preferences were significantly (P < 0.05) different from the others. All adult female T. absoluta laid their eggs on the upper side of the tomato leaves (60.56%) followed by the lower side (35.21%).  The lowest parts of the plant where eggs were laid are as follows: stem (0.85%), flowers (1.41%) and fruit (1.97%) (Figure 1). 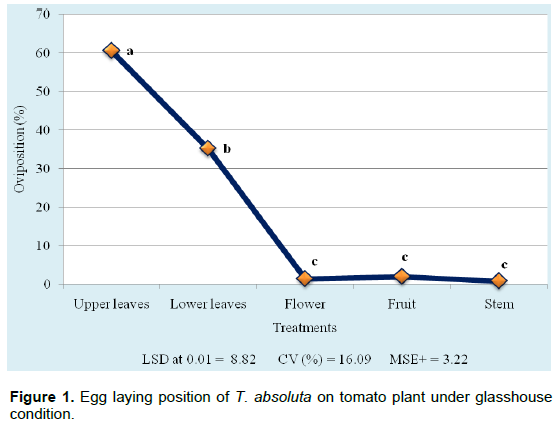 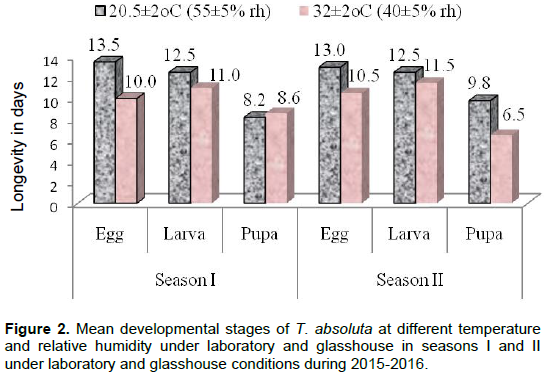 The total mean of developmental period for  T. absoluta from egg to adult was 30.6 to 31.2 days at 20.5±2°C (55±5% R.H.); while at 32±2°C (40±5% R.H.), it ranged from 26.4 to 27.8 days under glasshouse conditions (Table 1 and 2). The results agreed with the findings of Erdogan and Babaroglu (2014) showing that means of developmental period from egg to adult was 30.18 days. EPPO (2005) reported that under optimal conditions, T. absoluta developed in about 30 days. Barrientos et al. (1998) also found that average development time of T absoluta was 23.8 days at 27.1°C. Cuthbertson (2011) reported that the development from egg to adult took 35 days at 25°C. He also mentioned in the same year in England under greenhouse conditions, the mean total development time of T. absoluta was 39.8 days at 19.7 °C. Erdoghan and Babaroglu (2014) showed that the mean total development time of T. absoluta was 30.18 days on tomato at 25–26°C. T. absoluta developed slightly faster in this study compared to the results obtained  by   other  researchers. This   might  in  part  be attributed to the tomato cultivar differences and possible differences in the population of T. absoluta in these results. According to Du et al. (2004), the developmental period of the herbivore insects is strongly affected by the nutritional qualities of the host plant, which in turn influences its population growth. On the other hand, the chemical components of host plants can also affect the survival, growth and reproduction of herbivore insects (Wilson and Huffaker, 1976; Bernays and Chapman, 1994; Adebayo and Omoloyo, 2007).

Age specific developmental stages
Mortality percentage of eggs was recorded during life cycle: 1.40% at 20.5±2oC (55±5% R.H.) and 4.93% at 32±2°C (40±5% R.H.). But Cuthbertson (2011) stated that in the development stage, the survival of the egg stage was 100%; no mortality rate was recorded. The highest larval mortalities (26.49%) were recorded at 30.5±2°C (40±5% R.H.), while the lowest mortalities (15.99%) were at 20.5±2°C (55±5% R.H.) under glasshouse and laboratory, respectively. The pupal mortality rates during the study periods were recorded as 10.23 and 32.42% under laboratory and glasshouse conditions, respectively. Erdogan and Babaroglu (2014) found that the survival rate of pupa was 63.10% that is, 36.9% mortality. It was very high compared to that of this result (Table 3). From these studies, it is understood that at high temperature, the mortality percentages of all stages increased during developmental periods of T. absoluta under both conditions. 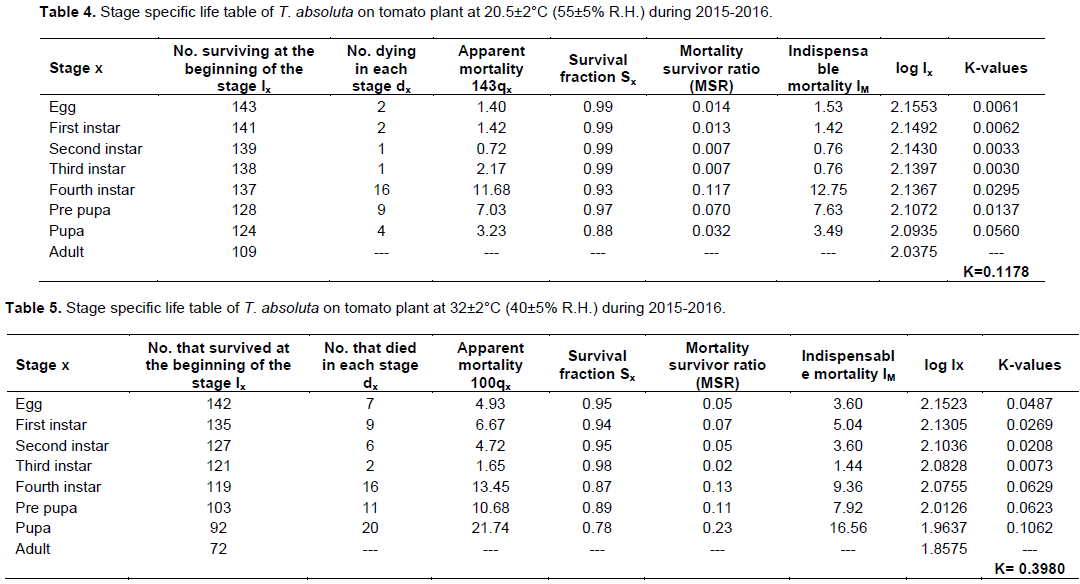 Based on these findings, it can be concluded that in different parts of tomato plant in their respective preference ranges, T. absoluta preferentially lays more eggs on leaves of tomato. On the other hand, T. absoluta at 32±2°C (40±5% R.H.) could maintain less a colony in a glasshouse than when reared at 20.5±2°C (55±5% R.H.) under laboratory condition. It has been proved as the most suitable for superior development, maximum survival and minimum mortality of T. absoluta. The current research paves way for provision of awareness to the farmers. Therefore, management strategies of T. absoluta need high attention in Ethiopian climate conditions.