Fruits of Ximenia americana have socio-economic value for the local people in West Africa. Understanding the possible influence of climate conditions on fruit production is a basis for better exploitation planning and sustainable management of the species. This study aims to assess the fruit production of X. americana according to tree size across a climatic gradient. The mean total number of fruits, the mean weight of fruits and the total weight of fruits per tree were calculated based on a sample of 450 trees distributed in five stem diameter classes and three climatic zones. Stem diameter, total height and crown volume were measured for each sampled tree. The global fruit production ranged from 200.37 ± 32.65 to 1027.20 ± 267.72 fruits/tree according to tree size. Trees with larger crown volume produced more fruits with higher total weight than those with smaller crown. The climatic zone significantly affected fruit production (p < 0.0001). The highest fruit weight per tree was recorded in the south-Sudanian phytogeographic zone, with a mean value of 1.49 ± 0.26 kg while the lowest value was observed in the sub-Sahel zone, with 0.67 ± 0.11 kg. The best prediction models of X. americana fruit production included crown volume and climatic zone.

Many people across the world rely highly on Non Timber Forest Products (NTFPs) for their livelihood. In West Africa, many local trees provide fruits that contribute to health and food security (Lykke et al., 2004; Lamien et al., 2009; Ouédraogo et al., 2017), especially for rural communities. One example is Ximenia americana L., a shrub with edible fruits (Figure 1) which also has many medicinal properties (Saeed and Bashier, 2010). The mature pulp contains 64.91% moisture, 5.91% protein, 22.85% lipid, 10.64% soluble sugar, and has bioactive and antioxidant activities. One hundred gram of pulp contains 187.98 mg vitamin C, 0.88 mg carotenoids, 2.81 mg anthocyanin and 38.29 mg yellow flavonoids (Sarmento et al., 2015). The fruit is particularly appreciated in rural areas during the food shortage period, which correspond to the species’ fruiting time (Thiombiano et al., 2012). Extracted oil from X. americana seeds is used locally for food, medicine and cosmetics (Ouédraogo et al., 2013; Urso et al., 2013), but it is not widely marketed (Urso et al., 2013). Despite the important contribution of X. americana fruits to the daily livelihood of many communities across sub-Saharan Africa, fruit production of the species is not documented. Currently, harvest of X. americana fruits depends entirely on wild tree populations, while this may not be sustainable as wild harvesting can lead to overexploitation (Jordaan et al., 2008).Previous studies on tropical trees showed that fruit production depends on tree size and prediction models were established for estimating fruit quantity based on dendrometric parameters, for example for Bombax costatum Pellegr. & Vuillet, Carapa procera DC., Pentadesma butyracea Sabine and Vitellaria paradoxa C.F. Gaertn (Lamien et al., 2007; Ouédraogo et al., 2014; Lankoandé et al., 2017). Some prediction models include both climatic factors and tree dendrometric variables. Fruit production of many species is known to vary across climatic gradient (Glèlè Kakaï et al., 2011; Hoque and Haque, 2016). Indeed, fluctuation of fruiting traits is strongly related to environmental factors, especially climate variability (Glèlè Kakaï et al., 2011). For instance, the number of fruits per shea tree varies from 225 to 305 fruits across a climatic gradient in Benin (Glèlè Kakaï et al., 2011). The fruit production of X. americana is unknown across the species distribution range, and even less the influence of environmental variables on the production. This study aims to: (i) estimate the fruit production of X. americana, (ii) determine the influence of tree size and climatic gradient on the fruit production and (iii) establish models to predict the species’ fruit production.

Study area
The study was carried out along a transect from northern to southern Burkina Faso, covering three phytogeographic zones (Fontes and Guinko, 1995) across the climatic zones of the country. Data were collected around nine villages: Koflandé, Mikérédougou (south-Sudanian zone), Theykui, Nounou, Douroula, Kari (north-Sudanian zone), Oula, Sousou and Bhem (sub-Sahel zone) (Figure 2). The climatic gradient ranged from around 1000 mm precipitation in the south-Sudanian zone to 600 mm in the sub-Sahel zone, with similar trend for the length of the rainy season and the number of rainy days (Table 1). The altitude varied from 250 to 350 m throughout the study area. The vegetation is characterized by woodlands in the south-Sudanian zone, wooded grassland in the north-Sudanian zone and shrub land in the sub-Sahel zone (White, 1983; Fontes and Guinko, 1995). Agriculture and livestock farming are the main human activities across the study area, involving 80% of the total population (Ministère de l’Economie et des Finances, 2010). 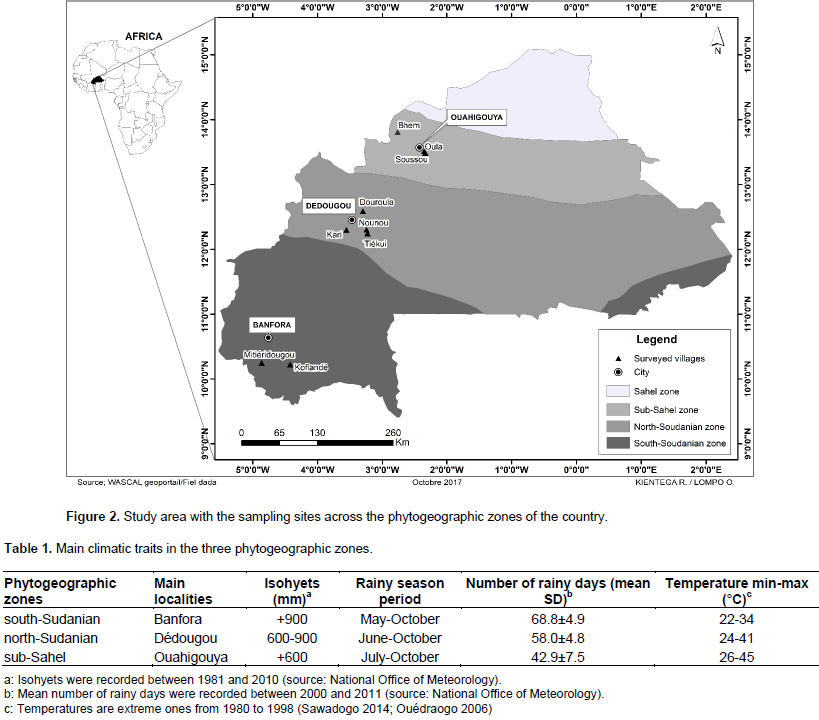 Data on fruit production were collected over two years (2015 and 2016) in the three phytogeographic zones (except for the south-Sudanian in 2015 only) during the maturity period of X. americana fruits (April to August). A total of 450 trees were sampled (150 trees per phytogeographic zone) and separated from each other by a minimum of 100 m distance (Ugese et al., 2008; Glèlè Kakaï et al., 2011). In each phytogeographic zone, 30 individuals were randomly sampled per stem diameter class (0-3, 3-6, 6-9, 9-12 and ≥ 12 cm); their diameter being measured at 20 cm above the ground level (D20). All fruits on the tree were collected, counted and weighted to obtain the fresh weight. For each sampled tree, additional dendrometric parameters were measured: total height, crown diameter and height. Only healthy trees without any sign of pruning and debarking were sampled.
Statistical analysis
Inter-annual, climate and tree traits effects on fruit production were analyzed, and prediction models were performed. General linear models (GLM) were used to test for differences in fruit production parameters according to year, phytogeographic zone and tree traits. Different prediction equations were performed considering dendrometric parameters and climatic zones as explanatory variables, and number of fruits, mean weight of one fresh fruit and weight of total fresh fruits per tree as response variables. Data were log transformed to meet the conditions of normality and homoscedasticity. The effects of tree traits were first tested separately (D20, total height and crown volume = â•¥*h*(d/2)2, where h = crown height (m), d = mean of short and long diameters (m)) using GLM and Tukey post hoc tests. Following, the effect of tree traits and climate zone were tested together. JMP 12 and R 2.15.3 software were used for the analyses. 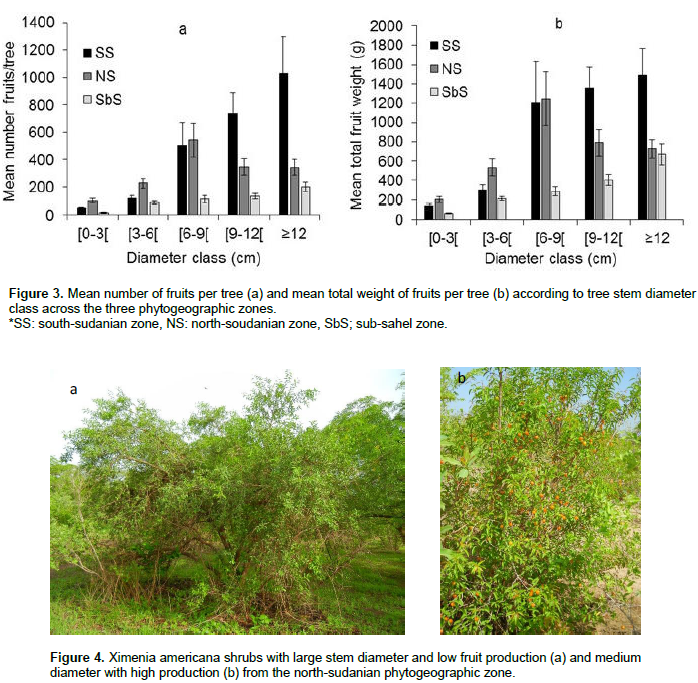 Inter-annual effect on fruit production
There was no significant difference in fruit production between years when tested for the sub-Sahel and the North-Sudanian zones (p = 0.71) as a consequence, only the data of the first year from the three phytogeographic zones were used to establish prediction models.
Prediction models to estimate the number of fruits
The number of fruits was significantly related to the stem diameter, total height and crown volume of trees. When tested individually they accounted for 28, 34 and 45% of the variation, respectively (Table 2). A model including together diameter, height and crown volume was not more explanatory of fruit production than the model with crown volume alone. This situation is due to the high correlation between the three variables. The climate zone tested alone had a significant effect on number of fruits which was significantly higher in the south-Sudanian zone than in the sub-Sahel zone (p < 0.0001). Crown volume and climate zone described 51% of the variation of fruit production (Table 2).

Influence of tree size on fruit production
Evidence is provided that tree size has an influence on fruit production as widely reported for other tropical tree species (Kouyaté et al., 2006; Ouédraogo et al., 2014; Lankoandé et al., 2017). Fruit production of X. americana was higher in trees with a large crown than the small ones. This result is in line with Molina et al. (2011) who reported that, generally, large trees are more productive than those with small diameters. The crown volume better explains the fruit production than the stem diameter, with higher production in larger trees. For many savanna tree and shrub species of West Africa (for example, Detarium microcarpum, Faidherbia albida, Piliostigma reticulatum, Bauhinia rufescens, Ziziphus mauritiana and Bombax costatum), similar fruit production pattern was observed (Bagnoud et al., 1995; Kouyaté et al., 2006; Ouédraogo et al., 2014). However, in the north-Sudanian zone the highest fruit production was found in the medium diameter classes trees of X. americana. In this phytogeographic zone, the largest trees which are also the oldest ones seem to be most vulnerable to environmental disturbances that could explain their low production. Intermediate size individuals of X. americana appear to be more resilient to the local environmental conditions in this zone as reported by Soro et al. (2011) for the shea tree, Vitellaria paradoxa.
Effect of climatic zones on fruit production
Climate is known to affect fruit production of trees in semi-arid areas (Glèlè Kakaï et al., 2011). The present study showed a five-fold increase of fruit production according to the climatic zones. Stressful environmental conditions such as rainfall shortage and the harmattan (drying wind) may induce an important abortion in fruiting and consequently a reduction of fruit production (Okullo et al., 2004; Berjano et al., 2006). Glèlè Kakaï et al. (2011) showed that the climatic zone had a significant effect on fruit production of the shea tree, V. paradoxa, especially for the number of fruits. The wind is an important determining factor of biological processes in the semi-arid areas (Okullo et al., 2004; Berjano et al., 2006). In the Sudanian and Sahel zones, the harmattan blows in gusts during the second period of dry season (for example, from February to April) which corresponds to the flowering period of X. americana (Arbonnier, 2002), and that could consequently have a negative impact on the fruiting. Apart from the irregular precipitations, this hard wind is the most likely factor accountable for variation in fruiting of the species. Indeed, strong winds result in disturbance of pollinators and abscission of flowers and young fruits (Okullo et al., 2004).
Prediction model to estimate fruit production
Dendrometric traits of trees have variable influence on fruit production (Totland and Birks, 1996). The use of both tree dendrometric traits and environmental factors to perform prediction models makes it possible to identify the influence of each variable for future observations. For X. americana tree, the crown volume prove to be the best predictor of fruit production (number and total weight of fruits per tree). As 51% of the variation in number of fruits and 43% of total weight was explained by crown volume and climate zone, these variables are sound factors for establishing valid prediction models. In addition, the few number of factors used to build the models traduced the effectiveness of prediction models. When taking together crown volume and climatic zone as predictors, fruit production is better estimated (Chapman et al., 1992; Popescu et al., 2003; Zywiec et al., 2012). This is also in line with Bognounou et al. (2013) who reported a relationship between biomass production, crown size of trees and climatic conditions.

This study highlighted the potentials of fruit production of X. americana. The total number of fruits per tree was high but their weight was relatively low. Climate conditions and tree crown volume are the major factors influencing fruit production. With consideration of all predictors, the south-Sudanian phytogeographic zone appears to be the area of the optimum fruit production of the species. Fruit production of trees was successfully predicted based on climatic zone and tree dendrometric traits. The prediction models revealed the crown volume of trees as the intrinsic driving factor of fruits production in X. americana trees. Such result is valuable information for the sustainable management and the economic valorization of the species.