The basic theory used in investigating the content of a text can be seen in Systemic functional linguistics (SFL) (Halliday, 2014). It is actually used to see perspective content of the language of the text. Metafunction and multimodal analysis in a text advertisement presents two things; first, is the natural representation of empirical, factual and particular advert and secondly,  the proper way it is used to understand or read such natural print adverts.
According to Halliday (2014), verbal interaction with another person is preferred to the network of meaning (collection of semiotic alternatives) which is realized through representation. It is known as system of choices. All the important principles are contained in the means-channel through which language is used by the user. Language is organized to meet people's desires. It focuses on the role of individual interactions. We can say that language exists because we change constantly based on desire and need when interacting. The  function and meaning of SFL approach in communication sees meaning as a relationship among ideational, interpersonal and textual function in verbal and written language. Based on multimodal perspective, this approach is involved in the relationship of the three meanings in which each means/channel of meaning used produces the complexity of meaning.
Saragih (2006) says that the text uses a language that is sourced from oral and written means of any size, which constitutes the whole unit, units of language use, ungrammatical units such as clauses and sentences and not defined according to its size. It has a unity or texture that distinguishes it from non-texts and involves semantic relationship referred to as cohesive and coherence in the meaning it expresses. Semantic does not only source from the content but the overall choice of language used. The text is limited to its functional meaning in the social affirming context that the text can be a text, a paragraph, a  complex  clause,  a  clause,  a  phrase,  a  group,  or  a sound. In addition, the texts studied under the SFL approach emphasize meaning. This confirms that no matter how small a unit of language is as long as the language unit has a meaning in the social context it is still called a text. Text is a unit of language. it has meaning in the social context that occurs due to interaction/communication. All these communication interactions are called multimodal (Sinar, 2012).
The ideational function or ideational meaning relates to the inner and outer worlds of reality. It is “language about something”. According to Halliday (2014), whenever one reflects on the external world of phenomena or the internal world of one’s consciousness, the representation of that reflection would take the form of ‘content’. This form of content is called the experintial meaning. Within the notion of ideational meaning, there is the logical meaning, which stores information about the way in which one situation is related to the other. The interpersonal function is an interpretation of language in its function as an exchange, which is doing the function of language. It is concerned with language as action (Halliday, 2014). The meaning of that statemet represents the speaker’s meaning potential as an intruder that takes into account interactive nature of relations between the addresser (speaker/writer) and the addressee (listener/reader). The grammatical level of interpretation with respect to the clause function is interpreted that the clause is also organised as an interactive event that involves a speaker or a writer and an audience (listener or reader). Clause of interpersonal function is clause of exchange, which represents speech role relationship. Language functions to fulfill human needs in the exchange of experience, such as; Human beings need to exchange experience as humans are social beings, ‘social products’ and consequently cannot live in isolation, no one can completely fulfill one’s needs, everyone needs other people and only human beings are destined with interpersonal function, human culture and civilization, history.
Based on the aforementioned, the objective of this research is to investigate the verbal semiotics resource employed in advertising cigarette in Indonesia. 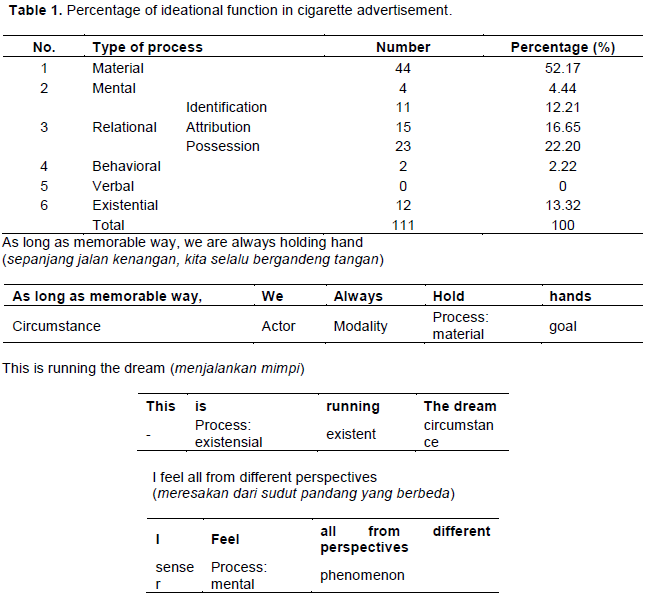 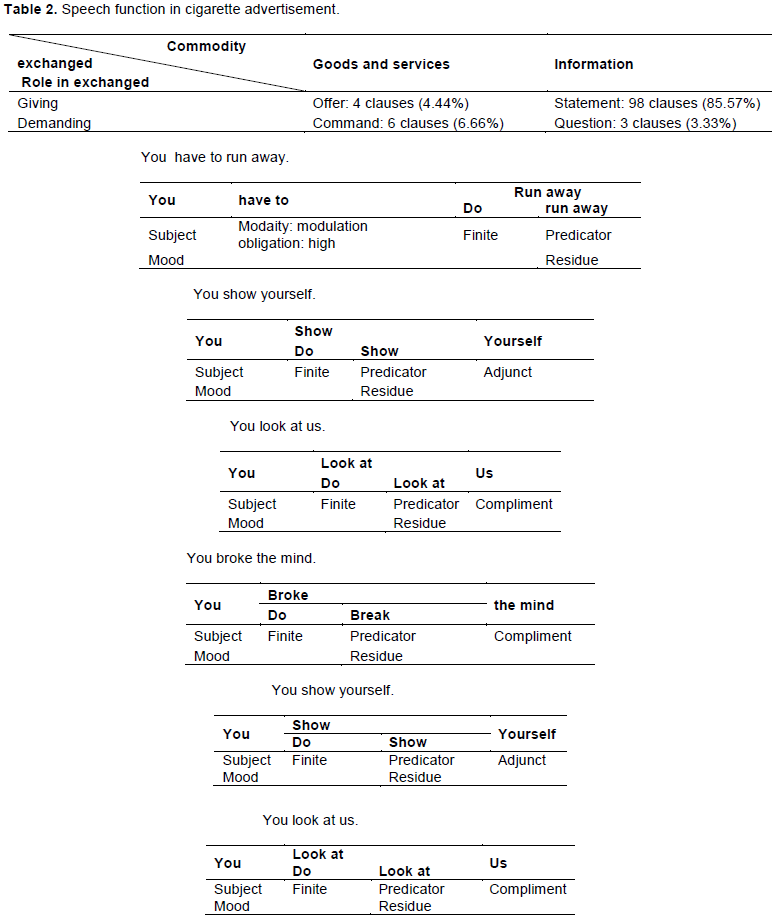 The finding of this research adds a new horizon to those interested in multimodal and critical discourse analysis study,   especially  in  investigating  advertisement.  Many  researchers have analyzed clauses from text. In this case, the researcher found a new model of analysis that still uses SFL as basic analysis. The researcher chose cigarette advertisement because it is always done on TV especially in Indonesia. This work has many weaknesses; hence in future it is recommended that more work should be done on the model of analysis in this field.

Indonesia is one of the biggest cigarette consumers in the world. Hence, the researcher investigated the verbal semiotics resources used in advertising cigarette on TV in Indonesia. From the result of the study, it is seen that material process is the dominant verbal semiotics resource used in advertising cigarette on TV. It aims to invite consumers that watch TV to act, that is, to buy the product and smoke it. And, speech function is used also for the advert on TV, to talk about the product in terms of its quality and quantity.