Prevalence and antimicrobial susceptibility of uropathogens in patients reporting to a tertiary care facility in Peshawar, Pakistan 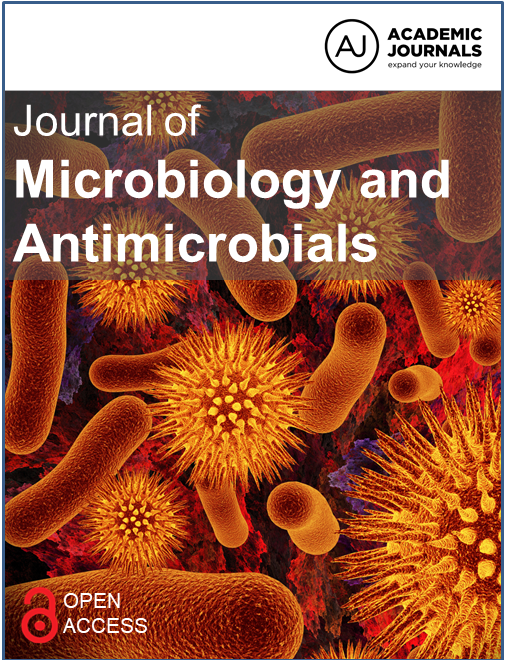 This study was conducted to assess the frequency and antimicrobial susceptibility pattern of bacteria in urinary isolates. The study was carried out in the clinical microbiology laboratory of a tertiary care hospital in Peshawar, Pakistan. The duration of study was 12 months, from July 2012 to June 2013. Mid-stream urine samples were collected in sterile containers. All samples for urine culture were examined. Samples were processed and microbial isolates were identified by standard methods. Antimicrobial susceptibility testing was performed by Kirby-Bauer disk diffusion method. Frequency of cultures proven urinary tract infection (UTI) cases in our study was 17.9% with Escherichia coli being the most common pathogen followed by Citrobacter freundii, Klebsiella oxytoca and Enterobacter cloacae. For E. coli, only 2% of the organisms were resistant to imipenem. For C. freundii, 9% of isolates were resistant to amikacin. For K. oxytoca, the most effective antibiotic was amikacin, with 100% sensitivity. Most common isolate was E. coli which was mostly sensitive to nitrofurantoin, amikacin and gentamicin. The drug of choice for oral empirical therapy for UTI in our setup is nitrofurantoin as bacteria were quite resistant to ampicillin, ciprofloxacin and cotrimoxazole. The best parental empirical therapies are amikacin and gentamicin.

The antimicrobials misuse in clinical practice has led to an increase of the microbial resistance and the consequent spread of bacterial resistant strains has become a serious public health problem (Sharif et al., 2012; Arjunan et al., 2010; Rahman et al., 2009; Fridkin et al., 2014). Urinary tract infection (UTI) is the most common infectious disease after respiratory tract infection in community practice (Epoke et al., 2000; Gonzalez and Schaeffer, 1999). It remains a major public health problem in terms of morbidity and financial cost with an estimated 150 million cases per annum worldwide,costing global economy in excess of 6 billion US dollars (Gonzalez and Schaeffer, 1999).

UTIs accounts for a significant part of the work load in clinical microbiology laboratories and enteric bacteria remain the most frequent cause of UTIs, although the distribution of pathogens that cause UTI is changing (Barber et al., 2013). Although UTIs occur in all age groups including men and women, clinical studies suggest that the overall prevalence of UTI is higher in women. An estimated 50% of women experience at least one episode of UTI at some point of their lifetime and almost 20 to 40% of women can have recurrent episodes (Den et al., 2013).

Community-acquired urinary tract infections (CA-UTIs) are mainly uncomplicated, colonizing preferably the bladder and causing cystitis. However, Escherichia coli may ascend through the ureters to the kidneys and cause more severe infections such as pyelonephritis (Wiles et al., 2008; Stamm et al., 2006).

The introduction of antimicrobial therapy has contributed significantly to the management of UTIs. In almost all cases of CA-UTIs, empirical antimicrobial treatment is initiated before the laboratory results of urine cultures are available; thus resistance may increase in uropathogens due to frequent misuse of antimicrobials (Den et al., 2013). In a country like Pakistan, clinicians may be prescribing more than one antibiotics, which increases the chances of development of antimicrobial resistance in pathogens (Ullah et al., 2009).

In an era of increasing antimicrobial resistance, knowledge of local antimicrobial susceptibility patterns of common uropathogens is essential for prudent empirical therapy of CA-UTIs (Rock et al., 2007). Therefore there is need for periodic monitoring of etiologic agents of UTI and their susceptibility pattern in the community. Such measures allows for controlling the increase of antimicrobial resistance and the spread of resistant bacterial strains that represent a public health problem worldwide.

The main objective of this study was to evaluate the antimicrobial susceptibility pattern of the bacteria responsible for urinary tract infection in Peshawar, Khyber Pakhtunkhwa (KP), Pakistan, in order to establish an appropriate empirical therapy.

Our study is a cross-sectional prospective study.

All the samples that came to our clinical microbiology laboratory during the duration of the study (July 2012 to June 2013) which fulfilled the inclusion criteria were included in our study. So our sample size was 1516.

All urine samples of hospital-admitted and outdoor cases of CM Hospital Peshawar from July 2012 to June 2013, in which there was indication of UTI coming for urine culture examination, were examined. Our hospital is a government-run tertiary care hospital located in the capital city of Khyber Pukhtoonkha (KPK) province of Pakistan. The clinical laboratory, admission wards and out-patient clinics are all located within the same vicinity and are run by the same administration. The patients presented to this hospital hail from various districts of KPK, FATA and upper Punjab; and belong to various socioeconomic classes.

Mid-stream urine was collected in sterile container, without stopping the flow of urine. Instructions on the urine collection procedure were labeled on the container and the patients were also instructed verbally about the procedure. For children, specimens were collected by urine collection bag. After every fifteen minutes, the bags were checked. After micturition, the bags were closed and stored at 4°C until processing. All samples were processed within 2 h of collection. In cases of unavoidable delay, samples were stored at 4°C and processed within 24 h. For all patients, date of sample collection, sex, age, result of urine culture, identification of the pathogenic isolate and the corresponding antimicrobial sensitivity were recorded.

Bacteruria Dipstrip (Mast BTR-1) was used to inoculate urine on CLED agar (Britannica Argentine Code B0211906). The Petri-plates were incubated at 37°C for 48 h. After incubation, the CLED agar plates were examined for growth after 24 and 48 h. After 24 h of incubation, all plates were examined for bacterial growth. If the number of colonies formed was sufficient (20 or more) and the size of bacterial colonies was adequate, then they were processed further for identification and sensitivity. Otherwise, those plates were incubated for another 24 h. If number of colonies grown were less than 20 even after 48 h, then it was considered as insignificant growth (exclusion criterion). If growth was seen as two or three different types, it was labeled as mixed growth (exclusion criterion). Significant growth was labeled when 20 or more colonies of one type were present (inclusion criterion), then antibiotic sensitivity was applied by Kirby-Bauer disk diffusion technique (Bauer et al., 1966).

For all cases with significant growth, gram stain was done. Depending on morphology on gram stain, further tests were done. For all gram negative rods API-10 S Company was applied. For selected cases API 20 E was applied, if identification was not precise with API-10S. For gram positive isolates catalase test was done. For all catalase positive cases, coagulase test was done. Novobiocin sensitivity test (5 µg oxoid CT0037B) was done on all catalase positive, coagulase negative, Gram positive cocci to identify Staphylococcus saprophyticus.

Samples from all age groups, pregnant, as well as post-treatment patients, referred to our clinical microbiology laboratory were included in the study. These cases were referred to our laboratory for urinary complaints by various clinicians such as medical specialist or nephrologist, urologist, gynecologist or pediatrician. Duplicate, same day samples and samples in unsterilized containers were excluded.

Our data were entered  into, and analyzed by  SPSS  version  21. 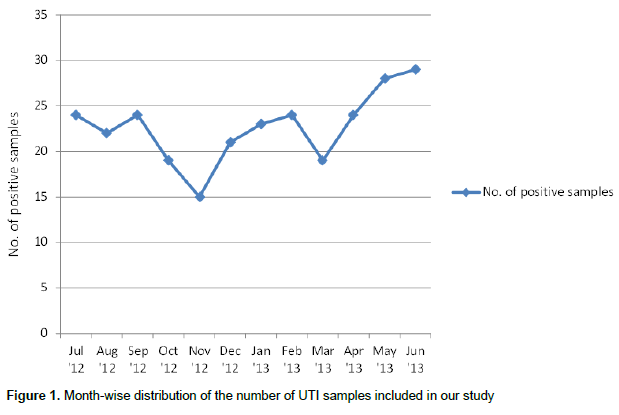 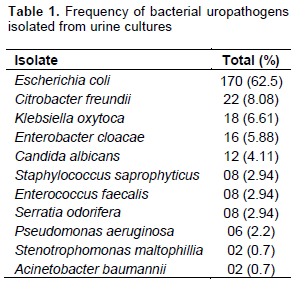 The sole Acinetobacter baumannii was resistant to ampicillin and sulfisoxazole. It was found to be sensitive to gentamicin, amikacin, lomefloxacin, nitrofurantoin, imipinem, pipracillin + tazobactam, ceftazidime, nalidixic Acid and ampicillin + sulbactam.

This study shows that females are much more vulnerable to UTIs than male. Out of the total samples positive for uropathogens, 62.2% were of female patients while 37.8% were of men. This is consistent with a study in US (Foxman, 2002) and Netherlands (Den et al., 2013). Actual percentage of UTI cases in women in our setup may be much higher because women are less educated, mostly remain in-door and have less access to primary health care. Hence, some women do not usually report to the hospital till their condition becomes serious. They prefer treating themselves with homeopathic remedies.

The percentage of culture positive cases for UTI in our study was 17.9%. This is significantly lower as compared to 60% in Nigeria (Kolawole et al., 2009), but higher than in Portugal which was 12.1% (Linhares et al., 2013). In this study, sulfisoxazole disk represents the sulfonamides like cotrimoxazole (CLSI, 2012). This study may have missed few bacteria which do not grow on CLED agar for example, Anaerobes and fastidious Streptococci.

As ours is a hospital based study and a good number of patients are initially treated empirically for UTI, so this study may not reflect the true prevalence of UTI in our area. In this study, E. coli was most common uropathogen (62.5%). This is quite similar to 64.5% observed in Portugal (Linhares et al., 2013) but lower than 85% observed in United States (Karlowsky et al., 2002). Similar study carried out in Karachi, Pakistan showed 52% E. coli among all urinary isolates (Farooqi et al., 2000). Antimicrobial sensitivity pattern of uropatho-gens mostly varies broadly by region. In this study, E. coli was highly resistant to ampicillin (89.41%), nalidixic Acid (83.53%) and ceftazidime (78.82%) respectively. E. coli was always considered to be resistant to ampicillin (Mazzulli, 2002). In the current study, E. coli was most sensitive to imipenem (97.64%) followed by nitrofurantoin (94.11%) and amikacin (85.88%), respectively. 96.4% of isolates were sensitive to nitrofurantoin in US (Karlowsky et al., 2002) while 89% were sensitive to this antibiotic in Senegal (Sire et al., 2007). 100% isolates were sensitive to imipenem, whereas 67% were sensitive to amikacin in India (Kothari and Sagar, 2008). A previous study showed that E. coli is most sensitive to nitrofurantoin (98.2%) (Mazzulli, 2002).

Fosfomycin is an oral antibiotic commonly used in Europe for treating CA-UTI with low resistance rates (Garcia et al., 2007; Kahlmeter, 2003) but fosfomycin was not tested in our study because its disk was not available and this drug is not marketed in our country.

Multi drug resistance (MDR = resistance in >2 antibiotics) was observed in 92% of the isolated bacterial uropathogens. This is much higher than that reported in Ethiopia (74%) (Assefa et al., 2008). The main explanation of this high rate may be inappropriate administration of drugs in empirical therapies and a dearth of infection control strategy. Another study also showed that increased incidence and high antibiotic resistance of especially of non E. coli UTI should be considered in selection of empirical antibiotics for treatment of UTI (Bae et al., 2010).

Easy availability and indiscriminate use of commonly used drugs like cotrimoxazole and tetracycline has led to an increase in resistance. High resistance to such orally administered antibiotics is mostly due to uncontrolled consumption of these drugs (Rao et al., 2013). Low resistance to drugs like amikacin reflects lower usage of these drugs (Kothari and Sagar, 2008).

International policies are no longer applicable for treating community acquired urinary tract infections in Pakistan, hence some guidelines based on local susceptibility pattern are recommended. Such regional surveillance programs are necessary to provide information which can help to develop Pakistani UTI guidelines.

E. coli was the most common uropathogen in our setup followed by C. freundii, K. oxytoca and E. cloacae. The best oral empirical therapy in our setup is nitrofurantoin. Ampicillin, ciprofloxacin and cotrimoxazole are not recommended as a first choice for treatment of UTI in Peshawar, Pakistan. The best parentral therapies include amikacin and gentamicin.