The aim of this study was to evaluate the antimicrobial activity and minimum inhibitory concentration (MIC) of copaiba oil, extracts of Passiflora cincinnata and substances commonly used against endodontic infections of bacterial strains certified by the American Type Culture Collection (ATCC) and against clinical isolates (CI). The methodology involved the preparation of crude extracts of the plants, the selection of copaiba oil and the standardization of samples. The antibacterial activity of these substances was tested against Enterococcus faecalis (ATCC), Escherichia coli (CI) and Pseudomonas aeruginosa (ATCC and CI). The MIC was determined by broth dilution and the nitroblue tetrazolium chloride dye reduction test. The data were statistically analyzed by the Kolmogorov-Smirnov normality test and by the Kruskal-Wallis test with a confidence level of 95%. The analysis of the antimicrobial activity showed that the ethanol extracts of P. cincinnata and the combination of calcium hydroxide with polyethylene glycol with and without camphorated monochlorophenol showed no antimicrobial activity. However, the copaiba oil and other substances evaluated showed some antimicrobial activity against the microorganisms used (p <0.01), exhibiting a MIC ranging from <0.3 to >400 µL/mL (p <0.05). Copaiba oil showed antimicrobial activity and could represent a potential phytotherapeutic agent to be used against microorganisms causing endodontic infections.

The microflora of endodontic infections is polymicrobial, and there is generally a prevalence of anaerobic bacteria. Microorganisms such as Enterococcus faecalis and Escherichia coli, but Pseudomonas aeruginosa, an aerobic bacterium, can also be present (Dianat et al., 2015). Mechanical cleaning of the root canal individually cannot disinfect the canal precisely, because the bacteria can hide in out-of-reach areas, isthmi and dentinal tubules. In addition to the mechanical action of the rotary or manual instrumentation, treatments frequently include the use of irrigating solutions of agents such as sodium hypochlorite and chlorhexidine (Dianat et al., 2015) and the intra-canal administration of calcium hydroxide, camphorated paramonochlorophenol-(CMCP), formocresol, tricresol formalin and/or a combination of corticosteroid and antibiotics. Given these limitations and based on the traditional use and relative ease of the isolation of active components, plants may provide potential sources of new drugs for the safe and effective treatment of diseases (Santos et al., 2008; Pimenta et al., 2015).

Among the plants that have been found to have pharmacological properties, Copaifera spp. are known to have anti-inflammatory effects on the airway and on the skin and to promote the healing of wounds and intrauterine ulcers, in addition to exhibiting antibacterial actions. Copaiba is an oil-resin produced by the exudation of the trunks of trees from the Copaifera genus. The material excreted is a transparent liquid, bright, with a coloration ranging from yellow to brown (Veiga et al., 2001). Among these plants, Passiflora cincinnata has been used to treat hypotension, as an anti-inflammatory agent, as an anti-anxiety agent and as an antitussive agent (Wolfman et al., 1994).

The aim of this study was to evaluate the antibacterial activity of preparations of copaiba oil and the extracts of P. cincinnata (passion flower) against P. aeruginosa, E. faecalis and E. coli. These effects were also compared with the antimicrobial effects of substances commonly used in endodontic practice.

Two fractions of ethanolic extracts of the flowers and leaves of P. cincinnata obtained from the Laboratory of Chemistry and Biochemistry, Federal University of Sergipe were used. The samples were placed in an oven (Model MA-037) at 37°C with continuous circulation of air for 48 h until they were completely dehydrated. The dried leaves and flowers were crushed and pulverized for 72 h to obtain a powder. The powder was subjected to extraction by maceration in 70% ethanol for 5 days. After concentration of the solvent in a rotary evaporator under reduced pressure, a crude ethanolic extract of the flowers  and  leaves  were obtained. The copaiba oil fractions were prepared and donated by the Laboratory of Natural Products ICB (Institute of Chemistry and Biotechnology – UFAL). Due to the difficulty in the synthesis of the products, the fractions were acquired in 2007, 2008 and 2009. These fractions were denominate as samples I, II and III, used in their pure form.

Commercial formulations of substances commonly used in conventional endodontic therapy were used, as shown in Table 1.

The following substances were used in the antimicrobial tests: Ciprofloxacin, formulations of the copaiba oil I, II and III, formocresol, tricresol formalin, camphorated paramonochlorophenol, 1% sodium hypochlorite and hydrocortisone + neomycin sulfate + polymyxin B sulfate. The bacteria from the American Type Culture Collection (ATCC), E. faecalis and P. aeruginosa, were received as lyophilized samples and were placed on maintenance medium, which was prepared with Miller-Hinton agar and Brain Heart Infusion (BHI) broth. The clinical isolates of E. coli and P. aeruginosa were derived from pre-cultures of the bacteria grown for 18 h at 37°C on Miller-Hinton agar.

The inoculum was diluted in saline to achieve an opacity optical density (OD) equivalent to 0.5 on the McFarland scale, which corresponds to 108 colony forming units (CFU/mL). The antimicrobial activity was assessed according to the method reported by Bauer et al. (1966) (disk agar dilution method). Previously sterilized paper discs were soaked in the solutions of standardized extracts and medications and were placed at pre- dish and incubated at 37°C for 24 h. The readings were performed by measuring the inhibition halo around the disc in millimeters, using a calibrated caliper.

The plants and substances used for the determination of the minimum inhibitory concentration were copaiba oils, formocresol, tricresol formalin, camphorated paramonochlorophenol, sodium hypochlorite 2.5%, hydrocortisone + neomycin sulfate + polymyxin B sulfate and ciprofloxacin. A total of 15 µg of ciprofloxacin was diluted in 300 µL of saline to a concentration of 5 µg/100 µL. The other substances used were applied as commercial formulations.

To determine the minimum inhibitory concentration, 96-well microdilution plates (Andrews, 2001) were used. Ciprofloxacin was used at concentrations ranging from 0.3 to 50 µg/mL, and the other substances were used in concentrations ranging from 3.12 to 400 µL/mL. For the negative controls, the wells with saline and brain heart infusion (BHI) broth we treated. Each well containing culture medium (BHI) and the substance (100 µL) was inoculated with 10 µL of a microbial strain. On the other hand, Calen was diluted in the same manner as in antimicrobial activity test and used in the evaluation of MIC. Then, the plates were sealed and incubated at 37°C for 24 h. After this incubation period, 10 µL of p-Iodonitrotetrazolium was added to reveal whether microbial growth was present, and the minimum inhibitory concentration of each substance was determined in triplicate.

The data were analyzed regarding the normal distribution by the Kolmogorov-Smirnov test. Since the normal distribution was not detected, the nonparametric Kruskal-Wallis test was used and the data were analyzed. The software ASSISTAT 7.0 software (UFCG, Campina Grande, Brazil) was used to apply the statistical tests which were set at a confidence level of 95%.

The ethanolic extracts of P. cincinnata and the combination of calcium hydroxide and polyethylene glycol with and without camphorated paramonochlorophenol showed no antimicrobial activity. However, the opaiba oils and the other substances evaluated showed antimicrobial activity against the target microorganisms (p <0.05) (Table 2). 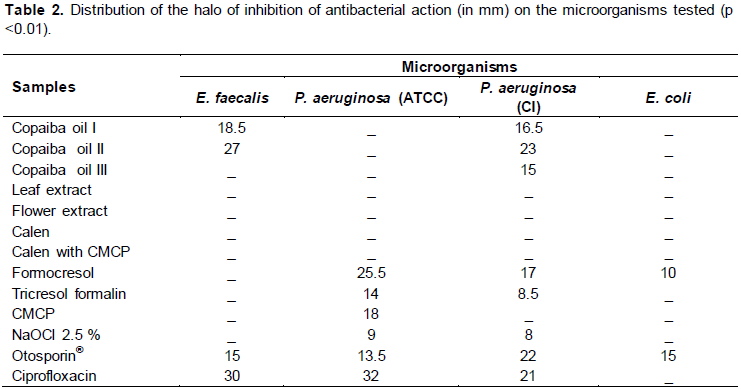 The minimum inhibitory concentrations for the copaiba oil, formocresol, tricresol formalin, camphorated paramo-nochlorophenol, sodium hypochlorite, hydrocortisone + neomycin sulfate + polymyxin B sulfate and ciprofloxacin are shown in Table 3. The Copaiba II oil, the hydrocortisone + neomycin sulfate + polymyxin B sulfate (MIC < 3.12 µL/mL to > 400 µL/mL) and ciprofloxacin (<0,03 a >50 µL/mL) were more effective agents against E. faecalis and P. aeruginosa as compared to the other substances (p < 0.01).

It was shown that the copaiba oil preparations (copaiba oil I and II) were effective against E. faecalis (ATCC) and P. aeruginosa (CI), with MIC values < 3.12 and > 400 μL/mL, respectively, while P. aeruginosa (ATCC) and E. coli (CI) were resistant to all the three oil preparations tested. However, in a study by Mendonça et al. (2009), the copaiba oil was effective against P. aeruginosa and E. coli, with MIC values of 12.5 and 1.56%, respectively, which may be explained by differences in bacterial resistance, such as the removal of proteins by an efflux pump, the differences in the expression of outer membrane proteins and differences in the protein production of DNA gyrase.

In another study, Lima et al. (2006) stated that the presence of the terpenoid in copaiba oil was responsible for its activity against Gram-positive bacteria, while it had no effects against E. coli, which is a Gram-negative bacterium. The present study and previous work by Packer and Luz (2007) showed similar results regarding the effects of copaiba oil on E. coli. However, Pieri et al. (2012) suggested that copaiba oil exerts an antimicrobial action that is only bacteriostatic in nature, because no concentration led to 99.9% destruction of bacteria in his studies performed to determine the bacteriological concentration maximum. In addition to these microorganisms, copaiba oil has shown antimicrobial activity against cariogenic agents such as Streptococcus mutans and some biofilm-forming agents, such as Streptococcus salivarius, Streptococcus pyogenes and E. faecalis (Pieri et al., 2012).

Similar results were found for calcium hydroxide + polyethylene glycol with and without CMCP, which showed no zone of inhibition for any of the test organisms. However, the analysis was performed after 24 h, while Estrela et al. (1998) found that calcium hydroxide exerted antibacterial effects against bacteria after 48 h; moreover, in the work by Gomes et al. (2002), antimicrobial effects were observed after 7 days. Notably, in another study by Estrela et al. (2003a), complete inhibition of microorganisms occurred after 60 days, showing that the timing of studies is fundamental and that it may take a long time for the calcium hydroxide to exert its full activity, likely because the antimicrobial activity is directly proportional to the rate of diffusion of hydroxyl ions.

On the other hand, formocresol was effective against most of the bacteria tested in the present study, except E. faecalis, with MIC values of 50 μL/mL for P. aeruginosa (ATCC and CI) and 200 μL/mL for E. coli. However, Ferreira et al. (2007) also found that formocresol had antibacterial effects against E. faecalis. Similarly, an antimicrobial action of formocresol against anaerobic bacteria was observed by (Ohara et al., 1993).

In the current study, camphorated paramono-chlorophenol was only effective against P. aeruginosa (ATCC), with a MIC of 200 μL/mL. In contrast, Costa et al. (2008) showed that CMCP had antibacterial effects against E. faecalis. Moreover, the work of Orstavik and Haapasalo (1990) showed that CMCP eliminated P. aeruginosa within four hours; however, there was also an effective front for E. faecalis (24 h) and E. coli (20 min).

The combination of  hydrocortisone + neomycin  sulfate + polymyxin B sulfate was the only treatment tested that showed activity against all strains tested, with a MIC of < 3.12 µL/mL for E. faecalis and > 400 μL/mL for the other microorganisms. Similarly, Siqueira Jr. and Lopes (1999) tested the effectiveness of this combination treatment on the bacteria present in saliva under aerobic and anaerobic conditions, and found that this drug only exhibited inhibitory effects in the presence of oxygen. The authors suggested that this phenomenon could be explained by the fact that the antibiotics (neomycin sulfate and polymyxin B sulfate) are effective against both aerobic and facultative anaerobic bacteria.

Ciprofloxacin showed activity against E. faecalis and P. aeruginosa (ATCC and CI), with MIC values of 0.03, 2.5 and > 5 μg/mL, respectively, because the strain of E. coli was resistant. Likewise, the work of Sader et al. (2001) showed that ciprofloxacin eliminated 61.4% of P. aeruginosa strains isolated from clinical infections, with a MIC of up to 0.5 µg/mL. Similar results were obtained in a study by Gales et al. (1997), who observed inhibition of the growth of P. aeruginosa (ATCC) by ciprofloxacin.

Based on the results of this study, copaiba oil exerted antimicrobial activity against E. faecalis and P. aeruginosa; however, the combination of hydrocortisone + neomycin sulfate + polymyxin B sulfate was the best antimicrobial treatment. Our study also showed that E. coli is the most resistant to the various substances tested.