Antimicrobial activity of Bacillus cereus: Isolation, identification and the effect of carbon and nitrogen source on its antagonistic activity

The present study is concerned with the taxonomy and influences of some cultural conditions on growth and antimicrobial metabolite production of a strain of Bacillus cereus, isolated from Alba’qa, Jordan, and designated NBS1, which is a highly active against a variety of Gram positive bacteria, and less activity was noted against filamentous fungi and yeasts, whereas no activity was detected against tested Gram negative bacteria. In order to optimize the culture conditions for the production of antimicrobial metabolite, the effect of different carbon and nitrogen sources were determined. Effects of nutritional compounds on production of antimicrobial compounds showed that the highest antimicrobial activity was obtained when arabinose and glycerol at 3.5 g/100 (w/v) level was used as sole carbon source. Ca(NO3)2 was identified as a nitrogen source that significantly affected antibiotic production. The results showed that strain NBS1 was a potential soil microorganism with antimicrobial activity and may be used for pharmaceutical and biotechnological purposes.

Microorganisms are known to produce some of the most important medicines for various diseases. They are the source of many lifesaving drugs and also effective antibiotics against bacterial and fungal infections (Thakur et al., 2007). After the discovery of penicillin in 1928, antibiotics have been recognized as the only means of effective control of microorganisms. Since then, there has been continuous search for more effective antibiotics (Guy and Mallampalli, 2008; Kuta, 2008). In spite of tremendous success of secondary metabolite research for antibiotics, the numbers of antibiotics are currently approaching a saturation curve with an apparent limit of application in the near future. Along with the usage of new antibiotics as therapeutics, there is emerging menace of drug resistance among microorganisms worldwide. The increase in antibiotic resistance has been attributed to inappropriate usage and inadequacies on the part of the manufacturers, thereby steady decline of effective antibiotics (Byarugaba, 2004; Blomberg, 2008). Due to the above said facts, there is increasing demand for new lead molecules as antimicrobials and has enforced to search for novel organisms with new metabolites in so far untouched habitats. Soil is an intensively exploited ecological niche for inhabitants to produce many biologically active natural products, including clinically important antibiotics. About 75% of the commercially and medically useful antibiotics have been derived from bacteria obtained from soil (Mellouli et al., 2003). Until recently, many new small molecular drugs of microbial origin isolated from soil were approved by Food and Drug Association (FDA) in the antibacterial area (Sivaramkrishna and Mahajan, 2009). This proves microbes have still remained as constant and eternal source of new antimicrobial agents overcoming new snags and challenges.

Bacillus genus is an aerobic Gram-positive spore former rod commonly found in soil and groundwater. These microorganisms are metabolically chemoorganotrophs being dependent on organic compounds as sources of carbon and energy. In addition, genus Bacillus produces a variety of antibiotics, such as Zwittermicin A (Emmert et al., 2004), bacteriocin (Bizani and Brandelli, 2002), cerein 7 (Oscariz et al., 1999) and kanosamine (Milner et al., 1996).

It is well known that designing an appropriate fermentation medium is of critical importance in the production of secondary metabolites (Gao et al., 2009). Prior knowledge and experience in developing a suitable basal medium may play an important role in further medium optimization (Jia et al., 2008). Production of secondary metabolites through fermentation is influenced by various environmental factors including nutrients (nitrogen,  phosphorous and carbon source), growth rate, feedback control, enzyme inactivation and variable conditions (oxygen supply, temperature, light and pH) (Lin et al., 2010;  Ruiz et al., 2010; Sánchez et al., 2010, Bizani and Brandelli, 2004). In addition, production of valuable metabolites by microbes differs qualitatively and quantitatively depending on the strains used in fermentation. Therefore, influences of medium com-ponents and environmental conditions are an initial and important step to improve metabolite production of the bacteria.

Our interest was focused on screening the soil samples for bacteria with antibiotic production potential from Alba’qa area in Jordan. The microbial strains that exist in this area with its diversity may provide rare and novel antibiotics (Quddoumi, 2012). This work aimed at identifying the isolated Bacillus cereus NBS1 and determines the effects of various nitrogen and carbon sources  on   antimicrobial   metabolite  production  under fermentation conditions.

Isolation of bacteria from soil

Bacteria were isolated from soil samples collected from Alba’qa, Jordan. For the isolation of bacteria, 1 g of rhizosphere soil sample was dispensed into 10 ml of sterile deionized water. The soil suspension was then shaken on a rotary shaker (Sanyo Gallenhamp PLC, Leicester, LE 3 2uz, UK) at 180 rpm for 30 min at 27°C. Ten-fold dilutions (102-105) were made in sterile saline solution and 100 µl aliquots were spread with a sterile glass rod over the surface of nutrient agar plates (per liter of distilled water) (peptone 5 g, sodium chloride 5 g, yeast extract 1.5 g, beef extract 1.5 g and agar 15 g) (HiMedia Laboratories Pvt. Limited, Bombay, India) in sterile plastic, 9 cm diameter Petri-plates. Six plates were used per dilution and dried in a laminar flow-cabinet for 60 min before incubation at 27°C in the dark for 48-72 h. All bacterial colonies were sub-cultured and transferred onto nutrient agar plates. Single colonies were isolated and screened for antimicrobial activity using the Petri plate assay (El-Banna and Winkelman, 1998).

The bacterial isolates were screened preliminary for their ability to inhibit bacterial growth on nutrient agar plates using Staphylococcus aureus SQ 9 as a test organism (30 µl of suspension of S. aureus SQ 9 was placed at the center and spread over the entire surface of the plate). Single bacterial colony was selected and patched along the perimeters of the plates. The plates were incubated at 27°C for 48 h, and the antimicrobial activity was determined by measuring zone of microbial growth inhibition (Jayaswal et al., 1990).

Identification of the bacterial isolate

The growth of bacteria was measured spectro-photometrically as an increase of the optical density at 600 nm (Roitman et al., 1990).

Extraction of the active substance from the supernatants (100 ml liquid cultures) was carried out as follows. Briefly, the supernatant was extracted with ethylacetate, the extract was evaporated by a rotary evaporator (Heidolph instruments, GmbH and Co KG Vertrieb, Kelheim, Germany) at <50°C, and the dry substance was dissolved in 0.5 ml methanol. The antimicrobial activity test of this extract was carried out against a range of Gram positive bacteria, Gram negative bacteria, filamentous fungi and yeasts by agar diffusion test. Filter discs containing 10 µl of the active substance dissolved in methanol were placed on the biotest plates. The plates were incubated at 27°C for 48 h, and the antimicrobial activity was determined by measuring zone of growth inhibition.

In the present study, soil samples were collected from Alba’qa, Jordan and screened for bacteria with antimicrobial activity against different bacteria and fungi. Several bacterial strains with antagonistic activity were isolated and tested by Petri plate assay. The strain (NBS1) was selected and used for further study. 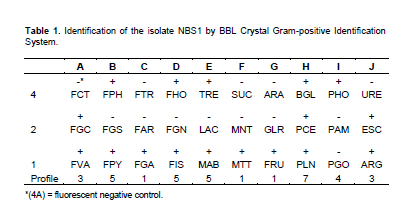 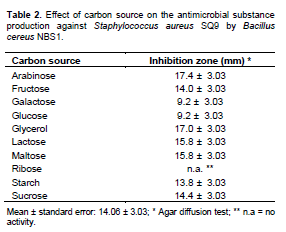 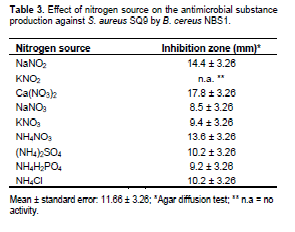 B. cereus NBS1 was cultured and the supernatant of the fermentation culture was extracted with ethylacetate. To  determine   and   monitor   the  time  course   for   the production of the antimicrobial substance in batch culture, agar diffusion tests were employed. 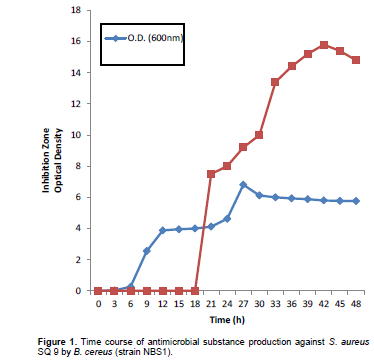 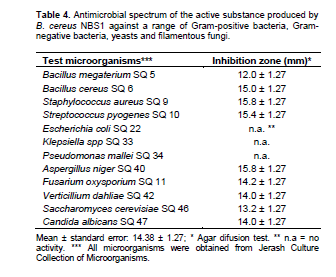 In the screening program for antimicrobial substances producing microorganisms, a bacterial strain isolated from a soil sample collected from Alba’qa, Jordan, was identified by BD BBL Crystal (Gram-positive ID System/GP) as B. cereus NBS1. B. cereus is an aerobic spore former commonly found in soil and groundwater and often on plants and animals at the point of harvest slaughter (Naclerio et al., 1993). During the past decades of antibiotic screening, members of the genus Bacillus have proven to be the fruitful in all the order Eubacteriales in the search for new antibiotics. Strains of Bacillus produced many kinds of peptide antibiotics. Among them are, plipastatin (Tsuge et al., 1996), zwittermicin A (Milner et al., 1995) and cerein (Naclerio et al., 1993).

In batch culture, some processes leading to the production of antibiotics are sequential, that is, they exhibit a distinct growth phase (trophophase) followed by a production phase (idiophase). In other processes, trophophase and idiophase overlap (Martin and Demain, 1980). The isolated strains (NBS1) seem to produce the antimicrobial substances in a fair amount in the culture fluids. Under the conditions used, the active substance accumulated late in the growth cycle, (in stationary phase) in the laboratory media reaching a maximum at 42 h. Naclerio et al. (1993) reported that the antibiotics  of Bacillus were isolated from the culture filtrates. The fermentation time needed for maximal yield of the antibiotics   production   seems   to   be   different among bacterial strains, 144, 72, 120, 36-40 and 168 h were respectively, reported (Meyer et al., 1973; Janisiwsz and Roitman, 1988; El-Banna and Winkelmann, 1998; Zheng and Slavik, 1999; Moyne et al., 2001).

As one of the most significant components in the medium, carbon  source plays a critical role as sources of precursors and energies for synthesis of biomass building blocks and secondary metabolite production (Wang et al., 2008;   Jia    et    al.,    2009).    Therefore,   influences  of medium components and environmental conditions are an initial and important step to improve metabolite production of  the  genus  Bacillus.  The  role  of  different carbon and nitrogen sources were evaluated for their influence and antibiotic production by this Bacillus strain. The results indicated that among the various carbon sources studied, the production of antimicrobial compound was maximal in medium containing arabinose or glycerol as a sole carbon source. El-Banna (2005) reported glycerol and fructose were the best carbon sources for antimicrobial substances production. In our study on B. cereus NBS1, lactose, maltose, sucrose, fructose, starch, glucose and galactose showed less effect on antibiotic production by this strain NBS1, whereas ribose had reduced the production of the antimicrobial substance. Several examples of secondary metabolites are reported to be suppressed by the presence of the carbon source. Glucose and ribose as carbon sources have been reported to interfere with the synthesis of secondary metabolites (El-Banna, 2005).

Frequently, antibiotics are produced only after completion of the growth phase. The synthesis of antibiotics is often repressed by substances that favor rapid cellular growth, such as glucose (catabolite repression) and ammonium ions (nitrogen repression). When the level of these nutrients is low, the rate of cell growth is slowed and antibiotic synthesis is derepressed (Lancini and Parenti, 1982). B. cereus NBS1 is potent and effective against different test microorganisms in vitro. Further studies will have to be done to determine of additional characteristics concerning purification, characterization and identification of active compound before it becomes a good candidate in pharmaceutical and biotechnological applications.