And the Oscar goes to . . . Global Cinema!!! Taking a Close-Up Look at the Business and Legal Challenges and Opportunities of International and U.S. Film Industries

For over 120 years, the global cinema industry has been an important segment of the world economy which has had a significant impact on the economy and culture of countries. This article analyzes the world film industry, with a close up focused on the U.S. movie market, utilizing SWOT (Strengths, Weaknesses, Opportunities and Threats) as a strategic tool to consider the internal and external challenges and opportunities facing the film industry today including the remnants of the studio system and box office winners and flops. In addition to the methodical approach of SWOT analysis, the author, an attorney admitted to practice in the State of New York and licensed to appear before the U.S. Supreme Court, will highlight some of the legal issues facing the film industry today, particularly in the United States, such as corporate mergers and acquisitions of businesses to acquire their copyrighted content, patentable technological advances such as virtual reality, digital streaming and subscription services along with the problem of piracy.
Key words: World film industry, global cinema, business analysis, legal challenges.

It only takes a quick glimpse at the 2018 Oscar Nominations for Leading Roles to notice the international Hollywood stars –Margot Robbie (Australian –I, Tonya), Sally Hawkins (British- The Shape of Water), Saorise Ronan (Irish and American –Lady Bird) (3 of 5 female nominations) along with Daniel Kaluuya (Born in the UK to Ugandan immigrant parents- Get Out), Gary Oldman (British –The Darkest Hour), Daniel Day Lewis (British and Irish –Phantom Thread) and Christopher Plummer (Canadian –All the Money in the World) (4 out of 5 male nominees), as   well   as   the   international  talent  under contract - Directors Christopher Nolan (British –Dunkirk) and Guillermo del Toro (Mexican-The Shape of Water). This continues a rich history. Throughout the over 120 years of film-making in the U.S., production companies have contracted with international actresses, actors and talent.
According to Price Waterhouse Cooper, the U.S. is the current global leader in filmed entertainment; however,” the next few years are set to see the US lose the dominant position that it has held in global box office revenue since the  silent  movie era  began  more  than  a
century ago.” This is due to “(A) momentous shift in the global cinema market’s balance of economic power . . . now looming.” (PWC.com, 2018) According to the projections in PwC’s Global Entertainment and Media Outlook (2016-2020), China could overtake the US as the world’s biggest box-office market in revenue terms as early as late 2017. They also note some of the business changes in the industry, such as the continued downward trajectory of physical home video revenue as well as the adoption of digital technologies in theaters and streaming on viewers’ home and mobile devices.
The year 2016 was the most lucrative for the global film industry, with over $11 billion in revenue (Boxofficemojo.com, 2018) thanks in large part to two Disney films – “Captain America: Civil War” and “Rogue One: Star Wars: The Force Awakens”. (The Hollywood Reporter, 2018 http://www.hollywoodreporter.com/news/how- star-wars-will-change-846918). Both films had international casts with actors coming from the United States - Captain America’s Chris Evans, Robert Downey Jr., and Scarlett Johansson, from England – Felicity Jones (Rogue One) and Paul Bettany (Captain America) as well as from Canada (Emily Van Camp –Captain America), Mexico Diego Luna – Rogue One), Hong Kong (Donnie Yer – Rogue One) and Romania (Sebastian Stan – Captain America). Captain America had a production budget of $250 million (Boxofficemojo.com/movies, 2018) and Rogue One had a production budget of $200 million (Marketwatch.com, 2018). Star Wars: The Last Jedi was the top film in 2017 and Black Panther in Marvel’s cinematic universe (distributed by Walt Disney Studios Motion Pictures) is making a strong showing in 2018 with $700 million in gross income (Boxofficemojo.com, 2018). Perhaps the future of the movie industry is a “force that has awakened” since we can view international stars filmed in remote locations or even fictional locations in theaters, in 3D, through virtual reality or by streaming on our hand-held devices. 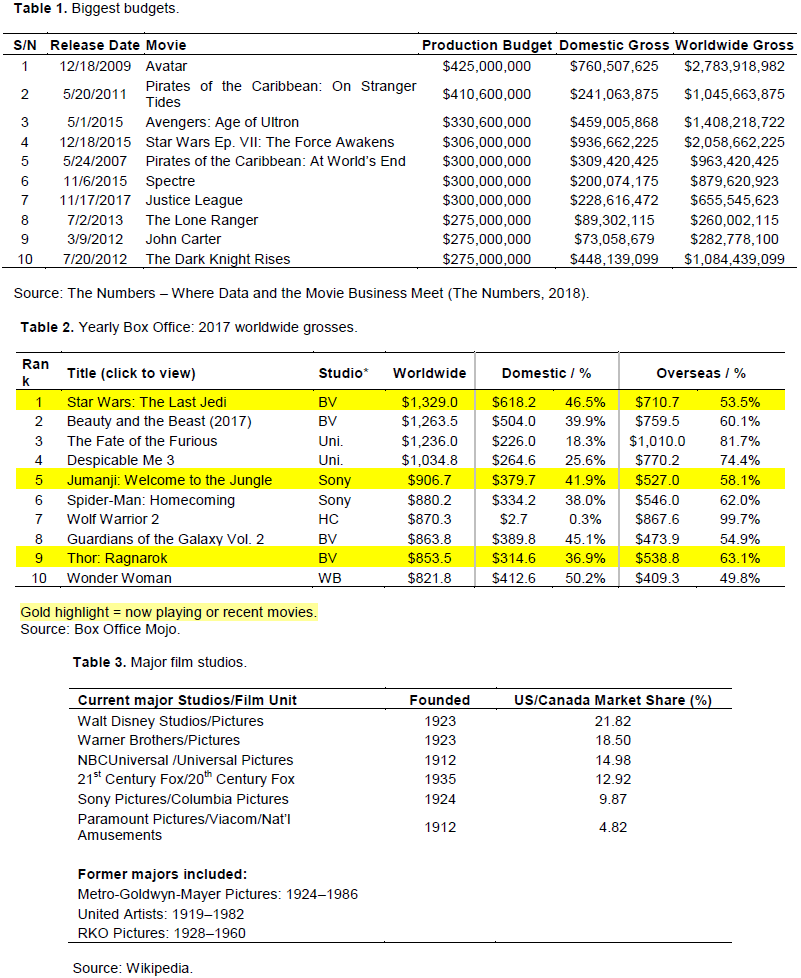 Home viewing of films became possible with videocassettes,   DVDs  (Squire,  2004),  pay  cable,  pay satellite (Kindem, 2000) and video on demand (Squire, 2004). Movies are now available via streaming services over the internet (Moore, 2011) and can be watched on a variety of devices including hand-held screens, such as a phone, tablet or laptop.
Research questions
1) What is the current status of the global cinema from a business and legal perspective?
2) What are the prospects for the U.S. film industry? 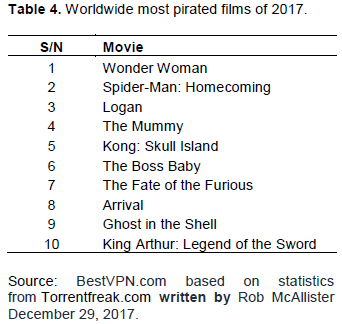 There is an old Hollywood joke that goes like this: “How do you net $5 million in the film industry? Start with $10 million” (Moore, 2011). To avoid this scenario, it may be wise to think of the film business as similar to a mutual fund. Risk of loss (Table 5) can be offset by other successful films (Table 7 for the most profitable movies, based on absolute profit on worldwide gross revenues and Table 8 for the most profitable movies, based on return on investment income), global productions and other streams of revenue, which again, can be international in nature, such as The Walt Disney Company’s Disneyland Paris, Tokyo Disney Resort, Hong Kong Disneyland Resort, Shanghai Disney Resort and Disney Cruises.
“Today, the U.S. copyright system is a cornerstone of a vibrant creative economy that is unparalleled in the  world –adding over $1 trillion to the national economy and nearly 5.4 million direct jobs in 2012 (IIPA Report, November, 2013) and making the United States a world leader in creativity, technological innovation and economic growth.” (MPAA.org). The United States film industry is currently the most prosperous in the world (Wikipedia) and with continued technical innovation and creativity, it will continue to serve the country and the world with its wonderful entertainment.
“Now more than ever we need to talk to each other, to listen to each other and understand how we see the world, and cinema is the best medium for doing this.” â€• Martin Scorsese. 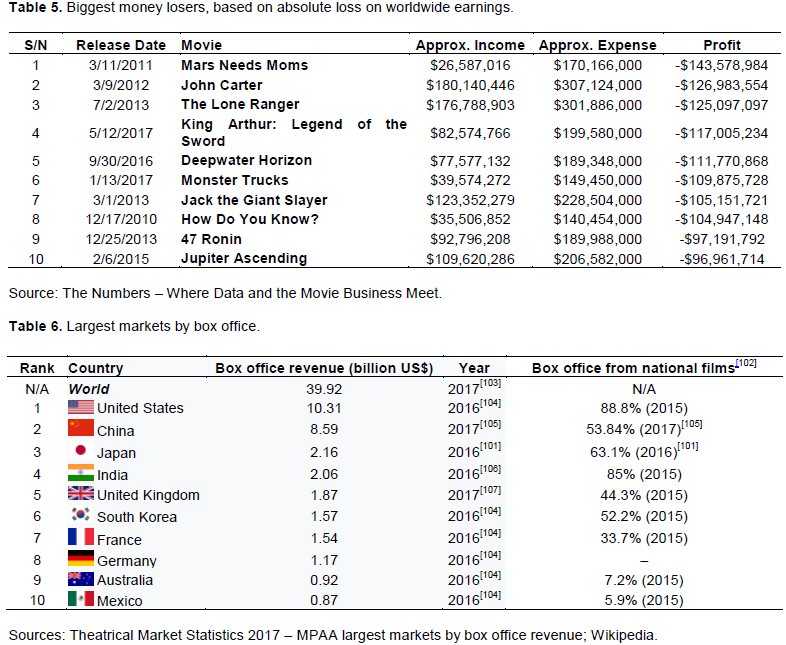 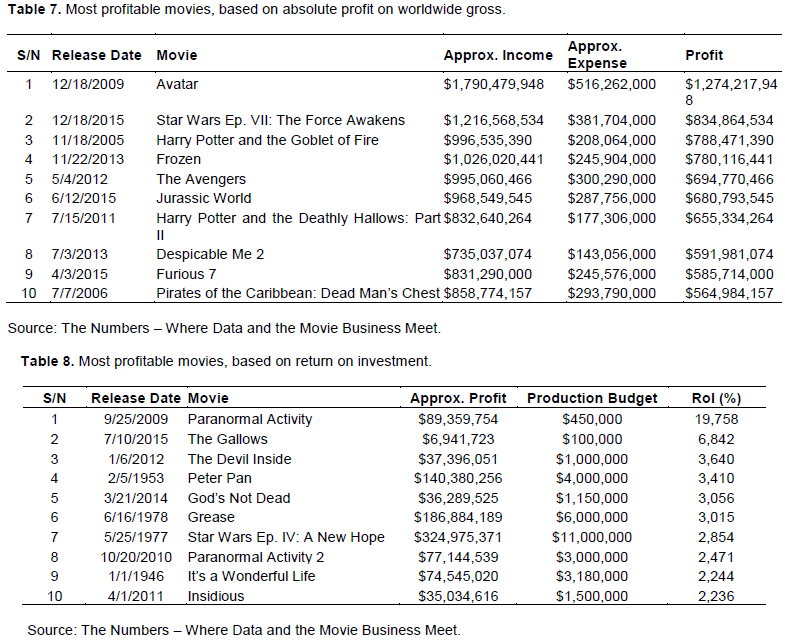 The author thanks St. John’s University, College  of Professional Studies (Queens, New York USA) for the assistance rendered during the research.