The objective of the study was to identify rural women's radio program preferences and listening behaviours. Survey was used to gather information from 200 rural women selected through multistage sampling from Sidama and Gedeo Zones. Descriptive statistic such as frequency and percentage were used to present results. Moreover, association among the different variables was tested using correlation and multiple regressions. Result from Pearson Correlation analysis indicated that there exist significant but negative association between radio listening hours and variables such as number of children, habit of listening before marriage, skill to operate radio, and education level. The result of the multiple liner regression indicated that a significant regression equation was found (F5,136)=8.679, p=0.0005) with an R2 of 0.242. Education with β-.263; p=0.001, makes the largest unique contribution to explaining the dependent, and listening habit before marriage is the next strongest unique contributor with β.242; p=0.003.  Based on the results, it was recommended that health and agricultural issues should be included in programming; that more local news should be presented, that more traditional music be selected, and that program for women should be aired in the morning and evening times.

Demographic data indicates that the age range was between 18 and 50 years, but majority were between 26-35 years of age, significant majority were at an elementary level education, 46.2% had family size of more than 5, and that 39% had 1 to 3 children. Response also indicated that 70% of respondents understand the Amharic language to some extent. Data on socio-economic status revealed that 66% were at moderate economic status, and 61.5% claimed that their dominant income comes from cash crops.
When asked about the type of gadget respondents use to listen to radio, majority (50%) indicated that they used a normal radio set while 24.7% indicated that they listen from a tape recorder set. 97.5% stated availability of radio programs in their language in the area and 72% had a functional radio at home. While 71.5% listen to radio, 52.7% stated that they listen to radio occasionally and 37% listen to radio frequently. Respondents were asked if they had skills in manipulating radio, majority 84.2% stated that they had the skill to do so.
When respondents were asked who from family members dominantly open/shut radio sets, while 62.3% stated that any member in the household can operate and 94.5% stated that they had no restriction at all. Respondents were also asked to compare their radio listening habits before and after marriage and surprisingly enough majority 77.4% stated that they listened to radio more after marriage. Respondents were asked to indicate the specific time of a day they habitually listen to radio dominantly. While 45% said they listen to radio in the evenings, equally significant percentage, 35%, said they usually listen to radio during the morning hours. When asked about their language preferences for radio 79% state they prefer local language.
Respondents were asked their demand of program content from radio and 47.9% stated they need health related issues while equally significant percent, 40.5% indicated they need the radio stations to present contents on agricultural issues. Majority’s main goal for listening to radio was to seek knowledge (58.2%) while another 22.6% listen for entertainment. Respondents were also asked to rank their preferences of radio program by genres. Accordingly, majority (76%) ranked news as their number one preference. In case of content related preference, 45.2% of respondents preferred health contents as their number one choice followed by agricultural program which was selected by 37% of respondents. 52.1% ranked local news as their first choice followed by national news with 32.2% respondents ranking it first. As far as music is concerned, 62.3% preferred traditional music while 34.9% preferred a combination of both modern and traditional music.
Results of correlation analysis
This section provides a Pearson Correlation test results of associations between radio listening hours and selected variables.
Table 1 shows the correlation analysis result of some variables such as number of children, number of children sent to school, habit of listening to radio before marriage, skill to operate radio, and education level which were tested against the dependent variable, hours listening per day. The result of the Pearson correlation shows that there exist significant negative correlation between number of children and listening hours r= -0.175, significant at 0.01 level (P=036). Similarly, significant negative correlation was also found between a number of children sent to school and listening hours. Moreover, the significant negative correlation was found between listening hours and independent variables such as habit of listening before marriage [r= -0.319; significant at 0.05 level (p=000)], skill to operate radio [r= -0.239; significant at 0.05 level (p=004)], and education level [r= -0.315; significant at 0.05 level (p=000)].
Results of multiple regression analysis
A multiple liner regression was calculated to predict participants listening hours based upon education (EDUC), number of children (NCHDSC) skill to operate radio (SKLOPR) listening habit before marriage (HBFMAR) (Table 2). Preliminary analysis was performed to ensure there was no violation of the assumptions of normality, linearity, and multicollinaity. A significant regression equation was found (F5,136)=8.679, p=0.0005) with an R2 of 0.242. The model explained that 24.2% of variance was because of the independent variables. Education with Beta value -0.263; p=.001, makes the largest unique contribution to explain the dependent variable, and listening habit before marriage is the next strongest unique contributor with Beta value for 0.242; p=.003. Number of children and skill to operate radio scored relatively lowest Beta value (B= -186; p= 0.46 and B= 0.174; p=0.025). Children sent to school did not make significant unique contribution to the prediction (B= -0.040; p= 669). 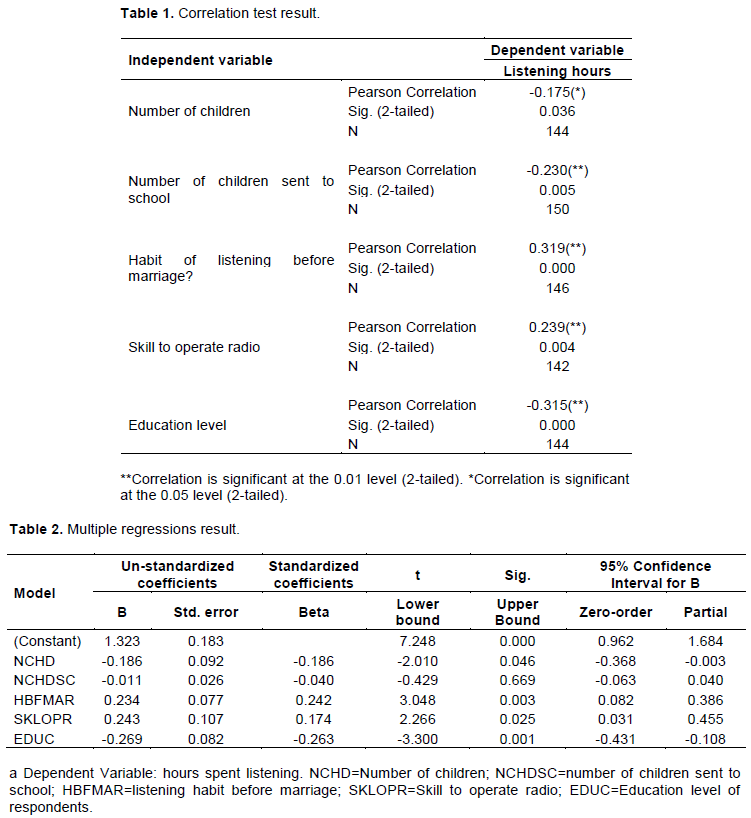 The study was conducted using fund obtained from Hawassa University, Research and Technology Transfer Office. The author is very much grateful for this assistance.