A comparison of American and Chinese college students' media use: The amount and origins of international news and entertainment

Amount and origins of international media consumption: A comparison of American and Chinese college students

The advancement in technology connected the world by providing communicative space and opportunities for those who otherwise would not have the chance to meet (Walther et. al., 2015). With more information traveling transnationally, media consumers are now able to consume both the content portraying other countries in their domestic media and the content produced  by  other countries (that is, international media). Although the valence of information conveyed and following outcomes may be ambivalent, globalization does affect the operationalization of national and international media of various types including television, film, music, magazines, websites, social network sites, etc., which creates more chances of international and intercultural learning and understanding. Following the growth of international media, scholars have investigated various types of international media with different foci such as content of international  news  (Jones   et   al.,   2013),  operation  of media outlets as business (Rutovic, 2016), media imperialism (Boyd-Barrett and Mirrlees, 2019), and traditional and new media platforms (Cunningham, 2016).

A rich body of literature has studied international media from both media production side and audience perception side. From media production perspective, majority of the studies were conducted around two major themes: a specific country and its national image in media or a significant social event that attracts international attention. For example, studies examined the image of the United States in Arab media (Galal et al., 2010), China’s soft power enacted in international entertainment media (Flew, 2016) and the influences in African countries (Wasserman and Madrid-Morales, 2018), international media image of Russia (Repina et al., 2018), and the image of India and its rising in international media production (Thussu, 2013). Some other studies investigated how international and domestic media reported certain social events such as global food riots of 2007–2012 (Hossain, 2018), the 2014 World Cup in Brazil (Graeff et al., 2019), human-elephant conflict in India (Barua, 2010), and Irreecha Festival Tragedy in in Ethiopia (Gabore and Xiujun, 2018).

From audience’s perception, studies have explored audience’s psychological responses, preferences, and international media effects on intercultural communication. The trajectory of research on international media changed from treating audience as passive recipients of messages to viewing them as active consumers who have agency (McMillin, 2007). For example, Rohn (2011) proposed different models about audience’s psychology to understand what drives audience’s enjoyment of foreign content. Compared to domestic media, international media also have their unique influences on intercultural communication. For example, Ramasubramanian and Kornfield (2012) studied U.S. audience’s identification and parasocial relationship with Japanese anime heroines and discussed the positive intercultural entertainment effects.

While audience’s psychological reactions and the following media effects have been studied, their actual consuming choices are rarely studied. What audience is interested in is often being treated equivalent to what is produced by media. However, media professionals’ choices and audiences’ interests are not necessarily the same. Lee et al. (2017) compared content analysis results from foreign news on television and survey results from audiences in twelve nations and calculated the content-interest correspondence. The results indicated that the countries and topics that are reported in foreign news on television do not always match what audience would like to watch. Similarly, Boczkowski et al. (2011) found a gap between thematic interest of journalists and audiences of online news sites in Western Europe and Latin America.

International media in the US and China

The United States and China are the two largest markets for media and entertainment products. According to the Media and Entertainment Top Market Report from International Trade Administration (ITA, 2017) in U.S. Department of Commerce, the U.S. is the leading country that exports the most media and entertainment goods including film, music, publishing, video game, etc. Professionals from all around the world joined the media industry in the U.S. (for instance, Hollywood) and made the domestic industry quite globalized (Olson, 1999). However, professionals’ diverse racial or ethnic demographics were not well reflected in the media products. Foreign cultures are rarely mentioned in American produced media products (Kumar, 2011) and few media products are imported to the United States from other countries (Martin and Nakayama, 2010).

China is the second largest media and entertainment market in the world (ITA, 2017). Media industry in China is gradually changing from a major importing market to an exporting market. Flew (2016) analysed the international media expansion of China and stated that with “an awareness that its relative lack of presence in global media content flows contributes to a negative perception of China internationally” (p. 290), China started to heavily invest on international expansion of both news and entertainment to develop its national/cultural soft power. According to an industrial report (Intelligence Research Group, 2019), the number of TV dramas imported to China drastically decreased since 2015. On the other hand, the exports of media products including film, social network applications, and web fictions have increased (Chinabaogao, 2017).

As the two largest markets that import and export media and entertainment products, international media production and consumption in the U.S. and China have massive influence on the global media, and further affect the audience and their mediated intercultural communication experiences. This study focused on college students in the U.S. and China and explored how much international content they consume and what countries produced the international contents. International media content was further divided into news and entertainment because previous research indicated that international news and entertainment may show different patterns in terms of the content and the valence. For example, Cui (2015) conducted a content analysis of Chinese newspapers in the year of 2009 and 2014. The results showed that the stance held by Chinese newspapers towards the U.S. was significantly more unfavorable (for instance, feature negative U.S. image, but promote Chinese positive image) than favorable. In studying how product defects and recalls were covered in newspapers, Vilceanu and Murphy (2018) found that both The Washington Post and China Daily tended to generalize the problems to the entire culture/country. On the other hand, entertainment narratives are one of the most common and easy formats of media exported to other countries (Olson, 1999). Different from international news, entertainment was less explored given the complexity of the content, genre, platforms, origins, etc. Hence, this report separated international news and international entertainment and explored American and Chinese students’ consumption of each. The following research questions were asked:

RQ1: How do American and Chinese participants compare on total amount of news and entertainment they consume?

RQ2: How do American and Chinese participants compare on the percentage of international news and entertainment they consume among their total media consumption?

Amount of media use

Countries of origin of international news and entertainment 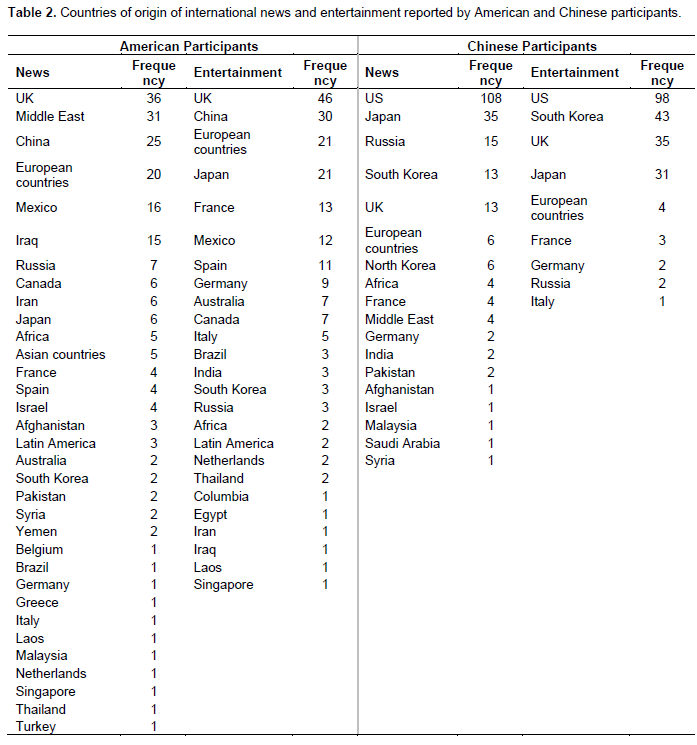 The frequency and valence of the media content covering a foreign country may affect audiences’ perceptions and attitudes toward that particular country. For example, as argued above, international news tends to report foreign countries in a more unfavourable way, which may constitute a negative mediated contact and lead to negative intergroup relations. On the other hand, consuming media content from other countries and cultures may cultivate audiences’ intercultural communication awareness and enhance their intercultural communication competence. More studies could be conducted in the future from intercultural communication perspective and media effects perspective to further examine the media effects of international  news  and entertainment consumption. This study could also be replicated in different countries and regions to explore international media consumptions.

This  study  depicted   international   media   use   of   the audiences from the two largest media and entertainment market, the U.S. and China. The essential step of producing impactful media content is to analyse the domestic and global audiences. An investigation from audiences’ perspectives is needed to increase the audience engagement. The findings from this short report are applicable to the practices of the international media industry on both their content production processes and ethical and societal consideration.

Like any other studies that adopt self-reported data, participants’ estimates are always subjective and may not reflect the reality. Future research could use both objective and subjective measures to show audiences’ interests in international media. The relatively small sample sizes also limited the generalization of the findings. More studies could be conducted with larger number of participants with a more balanced sample. This study showed preliminary data about American and Chinese college students’ international media use. More research could be conducted based on this study to further explore the content of international media produced and consumed, the specific genre of media products, and the effects of international media on intergroup relations.

The author would like to thank Dr. Michael Dahlstrom and Ms. Xiaoxia Yu for the support in conducting this study and for the assistance in data collection respectively.