The need to communicate early and frequently with multiple stakeholders is to ensure effective communication towards enhanced preparedness and response efforts in order to reduce disaster fatality rate. The media are critical stakeholders in disaster management as their contents create awareness and educate people in building resilience, reducing disaster risk and vulnerability in pre, during and after disaster. This study analyses the trends of communicating disaster information by the media to establish the existence of departure from the media not living up to its social responsibility role of informing and educating the public and to find out to what extent disaster awareness is communicated to communities to understand the effect of media messages on the community. This study adopted survey method with questionnaire developed and distributed to one hundred and twenty respondents in six communities in Benue State living close to flooded area- New Kanshio Village, Rice Mill Wadata, Idye Village, Achusa Village and Wurukum Village. The study disagrees with the United Nations International Strategy for Disaster Reduction (UNISDR) (2009) assertion that disaster awareness is low in the developing countries. The result affirm that disaster information are delivered through radio and television and little attention was paid to the use of community-based disaster risk management approach that involve use of informal communication channels such as town hall meetings, community based seminars. However, timely and frequent sympathy message from various stakeholders dominated the media content, which is more top–bottom approach and not totally understood by the rural inhabitants, probably leading to high victims’ level. The paper concluded that community-based communication process using communication forms such as interpersonal, seminar, town hall meeting should be used in creating disaster awareness and to complement effort of the media.

This study adopted survey research method with open-ended questionnaire developed and distributed to one hundred and twenty respondents in six flood ravaged communities in Benue State. Purposive sampling was used to select 120 respondents who were the victims of flood disaster from New Kanshio village, Rice Mill Wadata, Idye village, Achusa village and Wurukum village, Welfare quarters in Guma local government of Benue State. The respondents which are mostly traders, artisans,  civil  servants  and farmers are culled from population of 262,100 of the Guma local government. Out of the respondents, a total of 107 questionnaire were returned which reflects 89% response rate. Questionnaires collated from the field were quantitatively analysed with the use of descriptive statistics. Statistics were expressed in frequencies and percentages and presented in the table.

The demographic socio-economic characteristics of the respondents show that more men responded to our questionnaire than women. Also, more married people showed willingness to respond than all other marital status. This could be because they are looking for ways to voice out their concern and solve the problem at hand. The age of the respondents revealed that most of them were within age 30-39 years, the age of very strong men, willing to work but being impeded by the flood that took place. Data on academic qualification shows that the respondents were mostly secondary school leavers looking for admission into higher institutions or cutting some jobs in the farm or fishing for survival (Table 1).
Trends of media communication on disaster management in Benue State
The result presented in Table 2 revealed that the respondents had experienced natural and man-made disaster in their life. Specifically, more respondents had experienced flood disaster than fire outbreak and riots. Most of the respondents, as evident in Table 3, agreed that they were aware of the disaster prior to occurrence. This disagrees with the United Nations International Strategy for Disaster Reduction (UNISDR) (2009) that disaster awareness is low in the developing countries. However, when further analysis was made on the medium at which disaster information is passed, result from Figure 1 affirms that most disaster information in Nigeria is delivered through radio and television. Little attention was paid to the use of community-based disaster risk management approach that involves use of town hall meetings and community based seminars.
The concentration on the use of television and radio to a large extent allow the use of jargon, which Bongo (2010) advocated against. Rather the use of ‘jargon’ could be replaced utilization of simple words or proverbs that can elicit better understanding by the community. This can only be done when information is passed more at community meeting and seminar rather than formalised setting like newspaper and radio/television platform. Also, since communities members are aware that there might be occurrence of disaster, better disaster management information need to have been passed to the likely to be affected communities. This can aid formulation of community disaster strategies based on their experience and   adaptation thereby strengthening  the  community resilience. Furthermore, the community disaster strategies can be strengthened by building the  capacity  building  of community level disaster management committees and integrate  such into local government or state government institutional arrangements (Bongo, 2010). 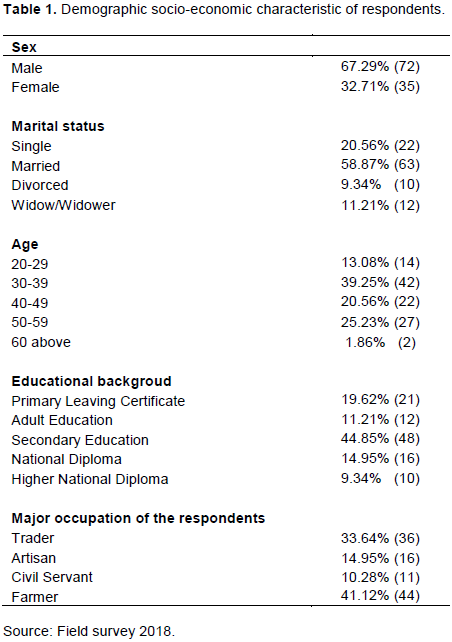 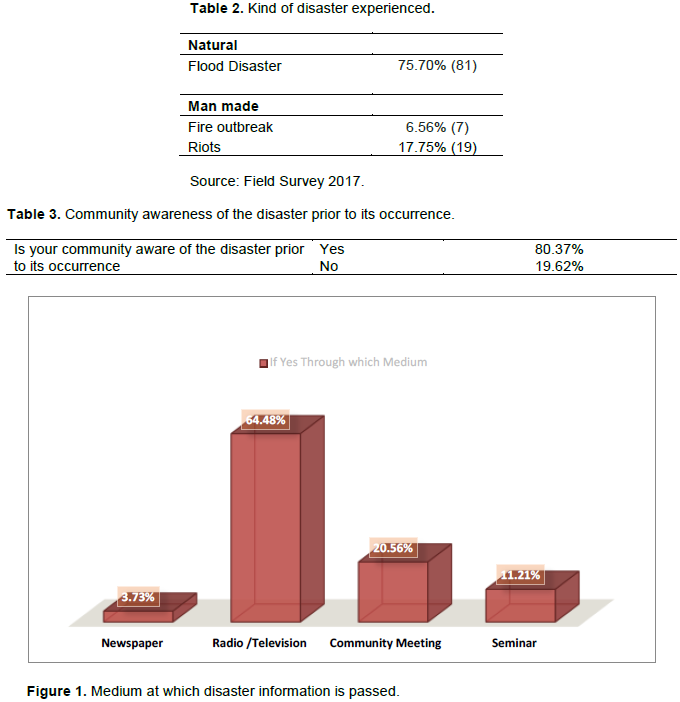 However, when considering the kind of messages media pushed to the community during the disaster, the respondents’ responses in Table 4 show that timely and frequent sympathy message from various stakeholders dominated the media content. These messages are type of top–bottom approach to communication dissemination that is purely urban- based and may not be in the form understood by the rural populace who were affected by the flood. Other responses were inter-personal sympathy communication from stakeholders like visitation to internally-displaced people (IDP) centres as well as visitation and provision of relief material to the affected victims. The implication of data is that community based communication process should be given more attention. This, we argued, that the information gotten through radio/television, could have  reduced  the  number  of  the victims of the flood disaster, if the community based disaster strategies, using communication process such as interpersonal, seminar, town hall meeting are in place, to complement effort of the media.

The study disagrees with the United Nations International Strategy for Disaster Reduction (UNISDR) (2009) assertion that disaster awareness is low in the developing countries. The result affirms that disaster information are delivered more through radio and television while little attention was paid to the use of community-based disaster risk management approach which involves use of informal communication channels such as town hall meetings, community-based seminars.
However, in line with Bongo (2010) the kind of communication required to link disaster-related information with the community level must be such that streamlining the use of ‘jargon’ and instead replace it with simple words or proverbs understood by the community. This can only be possible if the likely to be affected communities are mobilised to be involved in the formulation and development of their own disaster communication strategies based on experience and adaptation for community resilience.
Furthermore, relying only on the disaster information from television and radio may not motivate the victims to take urgent action. This is because disaster information from television and radio may be considered general compared to when such information is obtained at the community meeting, and probably delivered in their local language.
Moreover, the idea of timely and frequent sympathy message from various stakeholders which dominated the media content is top-bottom approach and shows that the post disaster information is still lacking in the country. It is the opinion of this paper that this perhaps could account for the reason why the flood victims was unable to learn from past events and so may fall victim next time.
This paper concludes that community based-communication process using communication forms such as interpersonal, seminar, town-hall meeting should be used in creating disaster awareness and to complement effort of the media. Effort should be geared toward development of appropriate post-disaster information strategy like lessons learnt from the perspective of the victims. This approach will strengthen pre-disaster information material that should serve in the overall disaster prevention programme.

This paper recommends that more disaster information should be delivered through radio and television perhaps using local dialect. However, to achieve more impact at the community level, the Nigeria Emergency Manage-ment Agency as well as her State and Local Government counterparts should develop community-based disaster risk management that would involve use of informal communication channels such as town hall meetings, community-based seminars etc. Part of the strategies to be deployed should be to involve the communities likely to be affected  in the formulation and development of their own disaster communication strategies based on experience, and resilience developed as a result of disaster in the community. As part of the broad community-based disaster information management to be developed, post disaster information must be such that will gather experiences from local community and package as post disaster education packages in local dialects as a way of reducing the victims’ exposure to disaster. It is  also  recommended  that  capacity  buildingprogramme should be organised for the selected community level disaster management members that will be involved and deployed especially on the use of portable satellite communication technology that would enable local communities to respond faster to disaster situations. It is recommended that community-based communication process using communication forms such as interpersonal, seminar, town hall meeting should be used in creating disaster awareness and to complement effort of the TV and radio stations being used presently.