The changing nature of â€œNews Reporting, Story Development and Editingâ€

With advancements in technology in this age of globalization and digital media, the nature of News Reporting, Story Development and Editing across the United States have been constantly evolving. Through a systematic secondary research, the current research would examine various factors which led to the evolutionary journey of News Reporting, when there was simply a man behind a desk delivering news to the age of journalism and reporting with the help of robots. This journey has been truly inspiring and has developed a relationship with the target audience in terms of expecting something new each time they see various podcasts and live reporting from journalists across the globe. The results depict similar advancements in the niche area of Story Development as we have entered the age of digital storytelling. This includes various skillsets such as research, resource-selection, script-writing, voice-overs, technical skill development, collaboration, creative expression and presentation, all of which would be discussed in detail. Similar advancements were observed in the journey of document editing as well as film-making and editing procedures from the traditional years to the digital age.

Changing nature of Story Development
It is important to know how the nature of Story Development changed with time and how it fits the new world of technology to explore opportunities. In this niche area, it is essential for the story developer to continue to risk, learn, adapt and move forward. This is how the film makers learn to tell worthwhile and deeper stories to their audiences, so as to understand the core of innovation. Today, with advancements in technology, story developers experiment in smaller  ways  in  multi-platform projects to climb up the ladder of success (Higgs, 2014). They continuously work towards exploring new opportunities to innovate in the distribution arena, working in new partnerships. This further involves developing direct digitally-enabled relationships with the target audience (Higgs, 2014).
In the olden times, much importance was given precisely to content of the story. Late in the 1970s, there has been a significant wave of storytelling in the U.S. wherein stories were narrated in the form of oral traditional or “folk”, music, dance and crafts. Today, with a broader network of enthusiasts, the professional storytellers use a variety of amateur and professional settings to depict their wonderful stories (Dt. Sobol, n.d).  However, in today’s modern times, creativity and digital approach to Story Development is also given significant importance. Much psychological research is being done on how people depict greater understanding and attachment to the story worlds because of new stories working in their brain (Higgs, 2014). They have great abilities to understand them and project them into realistic outcomes of Story Development to target audience. Therefore, we can say that Story Development starts with a baseline story with great content and ideas. The film-makers then partner with the best digital creative artists to reach out to target audience. The success of Story Development is measured qualitatively as well as quantitatively to understand how well it captures target audiences (Issa, 2015).
The nature of story developed has entered the age of “Digital-Storytelling” wherein people share aspects of their story through digital media production. This term describes the new practice by which people use various digital tools to develop and describe their own story. The media may include various film techniques of video and sound and  other forms of non-physical media in the form of photographs, electronic files, paintings and much more – through which individuals can depict a story or present an idea in the form of story-telling. In today’s modern times, digital Story Development covers a range of digital narratives such as narrative computer games, hypertexts, interactive and web-based stories. The Story Development concept is also used for advertising and promotion and has been recently used for film-making too (Piccirillo, 2011). Story Development and story-telling involves the process by which people share various life stories with others. Various accessible media techniques are involved in this process which includes the use of various equipment such as digital cameras, digital voice recorders and various hardware and software. Various techniques of Story Development allow individuals to share their stories over the internet through YouTube, Podcasts and other electronic distribution systems (Hinton (n.d) and Mole, 2018).
Story Development can be considered as an extension of the ancient art of storytelling, adapted with the modern techniques of digitized images and sound. These modern techniques involve digitized forms of text, images, video, audio, social media elements and maps. The art of digital Story Development is also used in classrooms to integrate subject curriculum with various knowledge skills sets. In many schools of media and communication, students work individually or in collaboration to make their digital stories, which are then made available to the international audience depending on the purpose of the project of Story Development. These days, Story Development is reflected in the form of short media films that combines personal writing, music and photographic images (Table 2). Through technology, technical background is enabled to produce different works with combination of images and sound. 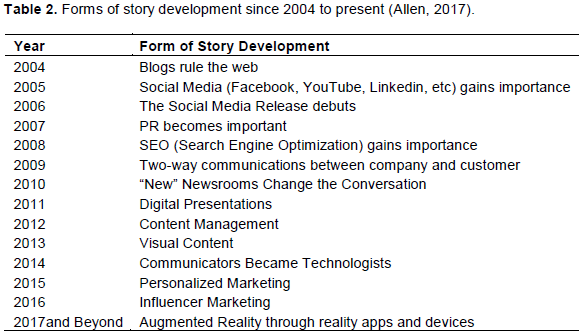 The nature of News Reporting has evolved from Newspapers and Radio to the age of 24-h news cycle. Therefore, many trends are changing the way people access and interact with news media. These trends are accelerating at such as pace that it has become difficult for  journalists  to  keep  up  with  the pace. We  have well understood how news and journalism have changed and evolved in recent years with the emergence of the internet, citizen journalism, 24X7 news networks, streaming services and much more.
With regards to Story Development, emerging technologies in digital media have completely changed the landscape. The story developers make efforts to explore various opportunities for utilizing the digital space to capture the interest of the target audience. The concept of brand management has also evolved with the evolution of Story Development. So, the days of simple advertisements are replaced by story-telling portfolios. The concept of research, resource selection, collaboration, presentation, script-writing, voice-overs, technical skill development and creativity expression have all evolved with changing nature of Story Development. The nature of copy-editing and film-editing has also evolved significantly with time with the use of digital frameworks and systems. Therefore, we can say that for film-makers, artists and editors, the concept of Story Development and Editing is still evolving and they always make it a point to consider the demands of the target audience before working on their projects.
To summarize, the best way to develop great ideas is to understand everyone’s ideas, build strong internal and external capabilities, work on the digital marketing tea and build the right platform for the team to connect with each other with creative ideas. This makes content management, story development and editing much faster, better and cheaper. Creative collaboration should exist between professionals of digital marketing, production, technology and research which would then lead us to the golden age of digital technology. In other words, News Reporting, Story Development, storytelling and Editing are only getting better with advancements in digital age. With the invention of robots and other automated systems, further revolutionary systems are yet to be encountered in the future of online journalism, Story Development, and Editing. Therefore, there is an exciting future waiting for all of us. This would be a world full of feelings, emotions, new stories and editing mechanisms. It would be interesting to research and investigate if robots would replace editors and story developers. The future holds many promises for technologically empowered services in the sector of News Reporting, Story Development and Editing.