This study aims to explore the practice of public relations management in maintaining relations with the public who interact with a corporate organization. To investigate the role of public relations in maintaining good reputation, a mixed method approach was employed taking Ethiopian Broadcasting Corporate as a case study. Data were collected from different instruments such as questionnaire, document review and in-depth interview. The questionnaire was administered to 50 participants, while in-depth interview was done with the public relations department officers of EBC. The findings of this study indicated that the public relation campaign of EBC is not research oriented and the outcome of the campaign is not measured. In addition, survey of the audiences’ perception indicated that audiences have negative perceptions towards the organisation. Hence, it is possible to extrapolate that the efforts made by the public relations department of EBC to manage organisational reputation is not successful. This could possibly be due to lack of research-oriented public relations campaign and lack of research on return on investment. 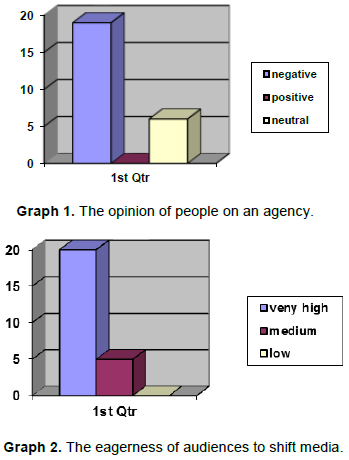 1. The public relations department of EBC is not capable of changing negative attitude of people towards an agency to favourable or positive.
2. The department is not anticipating what will exist near the future regarding the public opinion and looking for solution.
3. The public relations activities, especially those related to public opinion are not research oriented; rather they are done by assumptions that are not reason and fact supported.
4. The department do not evaluate the outcome or the effectiveness of its campaigns.

1. The public relations department of EBC must be able to change the opinion of people from unfavourable to favourable state to create mutual understanding to achieve organizational goal.

2. As research is uncompromising concept in the public relations activity, it must be conducted in regular basis before and after the campaign.

3. Campaigns by the department must be evaluated, and based on this, it must identify the possible improvements.