The trend of aging is a common social problem of the world. Different regions and cultures have different ages. Many studies on the ageing society are actively looking for countermeasures for the problem of aging. The elderly are not just groups of similar ages; they also have generational and individual differences. The elderly in different cultures and environments will have different lifestyles and needs. No matter how active they are, as they age, their physiological and behavioral abilities change. The tardiness of cognitive processing and interpretation causes the efficiency of their information processing to decline.
The elderly are different from general consumers. They have different physical and psychological traits, cognitive preferences, and reading comprehension. They process information at a slower rate than younger consumers and remember less product-related information (Reams, 2016). With the increasing market potential of the elderly, it is a pity that their consumption habits and marketing communication are not completely understood. Therefore, there is an urgent need to probe into such aspects in order to provide related information as a reference for silver marketing. The so-called silver marketing to elderly consumers is gaining momentum in Asia. In the affluent Asia Pacific area, the ageing market is projected to reach US$3.3  trillion  by  2020.  52%  have   indicated  that  the ageing market economy is expected to boom from 2020 to 2025. The silver market is one of that business that we cannot afford to ignore (Ageing Asia Investment Forum, 2015).
Research purpose
Many studies on the elderly have mainly focused on the aspects of medical care and social welfare in Asia, with importance attached to studies on elderly-related sports, welfare, education, and health management. However, there is a lack of research on marketing and communication approaches for the elderly. This study classified three age groups: the elderly above 65 years old, older adults aged 45-64, and young adults aged 25-44, to compare their information loads on advertising effect. The research purposes are as follows:
1) To compare the differences of cognitive age and advertising credibility for the three age groups.
2) To understand the advertising effects of different information loads for the three age groups.
3) To examine the significant relationship between cognitive age and advertising credibility on reading advertisements with different information loads. 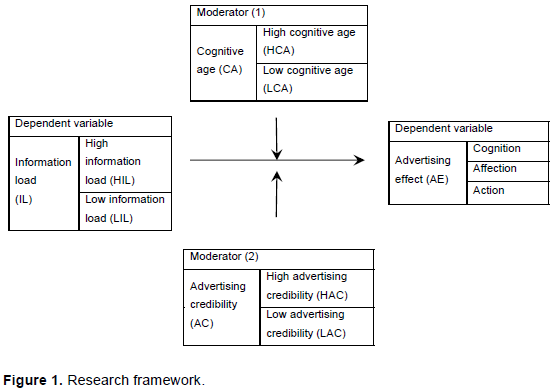