Kinesthesia and catharsis: An analysis of â€˜Bhumikaâ€™

Kinesthesia is a transformation of mental state into physical catharsis, the embodiment of psychological pain into physical. The layers of mental disturbance are enfolded into physical actions performed through the parts of body. To Eisenstein, physical actions are always motivated by the psychological. Kinesthesia in the form of dance is the transformation of emotions into one’s self. The film ‘Bhumika-The Role’ is based on Hansa Wadkar’s autobiography ‘Sangtye Aika’ (translated into English as ‘You Ask, I Tell’). Kinesthesia of her body movements during dance and her act on stage, expresses her inside pain. Her beautiful act is presented to be an act of catharsis. ‘Bhumika’ is a beautiful transformation of physical embodiment of psychological state of mind. To understand the female version of catharsis, ‘Bhumika’ is analyzed on the basis of various elements the film is focused upon. The semiotic technique of film analysis is followed to understand the signs and symbols used in the film as metaphors. Along with the symbolic elements (title, storyline, narrative, songs and music, characters and dialogues), technical elements (camera techniques, editing, lighting, location and set) are also analyzed and discussed in the study. The film is based on a female artist and is feminist in nature so, the feminist film theory is applied on it.

Cinema on life reproduces identifiable parts of our world by framing, focusing and juxtaposing aspects of the visible in acceptable ways (Heath, 1981).
Understanding biographical films is equivalent to understanding lives. All the persons these films are based upon have gone through various phases of life, ups and downs and struggles. Their lives could be best understood from their shared experiences, their arts and creativity, their works and achievements and the pain they suffered. In turn, biographical film can be understood by understanding all these terms in relation with the life of hero, these films are based upon. In Shyam Benegal’s words, he was the early feminist in Indian  context.  Along with autobiography of Hansa Wadekar, her story is also depicting development of film industry through two and half decades 1930s, 1940s and 1950s, the era when images changed from black in white to color as well. Certain kind of film stock was used in that era. So the different kind of stock was used in the film to relate to different reality (William, 2006).
The title ‘Bhumika’ means to play role, to act, to be a character in a film. The title introduce Hansa’s role in films and life. The way she finds out characters she is playing from her life itself. The continuity and narrative of biopics is not similar to films of other genre and it cannot be distorted because one incident leads to the other, similar to the life it is based upon.
Bhumika, although not a courtesan film in the strict sense as the lead character is not associated with a brothel and her sexuality is not potentially for sale, but the film raises many of the same issues-about art, entertainment, and female sexuality as economy as other films where protagonist is a prostitute. The films make an interesting link between acting and prostitution as many prostitutes were unwilling to appear in movies in 1930s, the time-frame of this film. A self-reflexive film, Bhumika pays obvious homage to Bombay Cinema, recreating the studio atmosphere of 1930s and 1940s (Chakravarty, 1993). The choreographic sensitivity of the film and kinetic art leads to the personal catharsis (Durgnat, 1967).
More than being a women-centered film, Bhumika links to a postcolonial political reality, through the background use of radio news bulletin with the drama of struggle and conflict involving the central character. Realism is presented through Usha’s life and fantasy through her movie roles. The screen name of Hansa Wadekar to ‘Urvashi alias Usha’ connects beauty as well as the mythological role of temptress as Urvashi being the Siren sent by Indira and the gods to distract the sage Vishwamitra for his meditations in the Mahabharata (Chakravarty, 1993).
Sex and power relations and also sex as power relation dominate Benegal’s work. The disruptive effect of sex or sex repression is not neglected in situation of change or power relations (Jha, 1985). 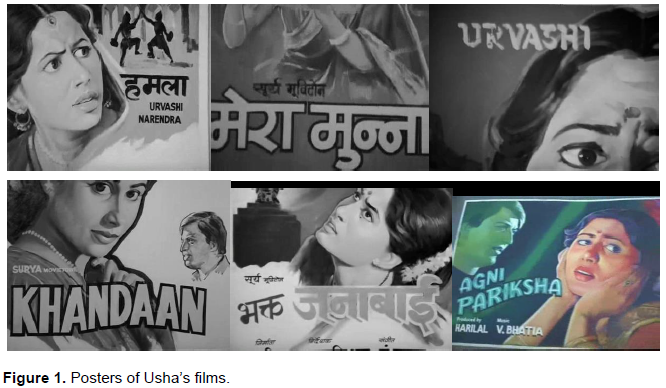 The films she plays role in, complete her emptiness and satisfy her loneliness. In the film on the story of Satyavan, who prays and takes life of her husband back from Yumdoot (One who takes the dead person to Yamaraj: The God of death). She plays the role of Champabai, who is stubborn not to sale her body. Her dialogue in Agni Pariksha,“Agar Sita ki agni pariksha nahi le skte to mujhe meera ke zahar ka pyala diya jaye. Tabhi ek pativrata ke sath sacha insaaf hoga” (If you cannot take my ordeal as Sita then give me a cup of poison as Mira, only then a justice would be for a virtuous wife.) All these characters establish her as a powerful woman. Who stands and fights for her rights which she could not do in reality.
Facing mirror: Facing reality of life
Mirror images of Usha represent her double life,  her  dissatisfaction from all the roles in life. Everytime she seems looking at her another face in mirror, the face of a completely independent woman and remains unsatisfied by not finding it (Figure 2). 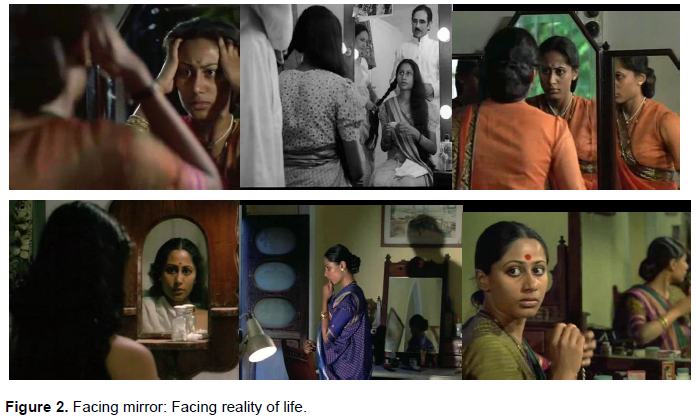 Stairs: Ups and downs/imbalance in life
Complex  shots  of  stairs  describe  the  complexity  of  situations, irresolvable problems, dissatisfaction from life and mental disturbance of the characters. Stairs present Usha’s journey to a new place. The escape from Kale, hotel room, Rajan’s house, hospital, the hotel she spent night with Sunil and Kale’s house. The mise-en-scene is such that she feels shrinking in the house. The deep well of stairs has been formed with the hospital stairs in image no. 7, as if she is sinking down in the deep well of grief after abortion (Figure 3). 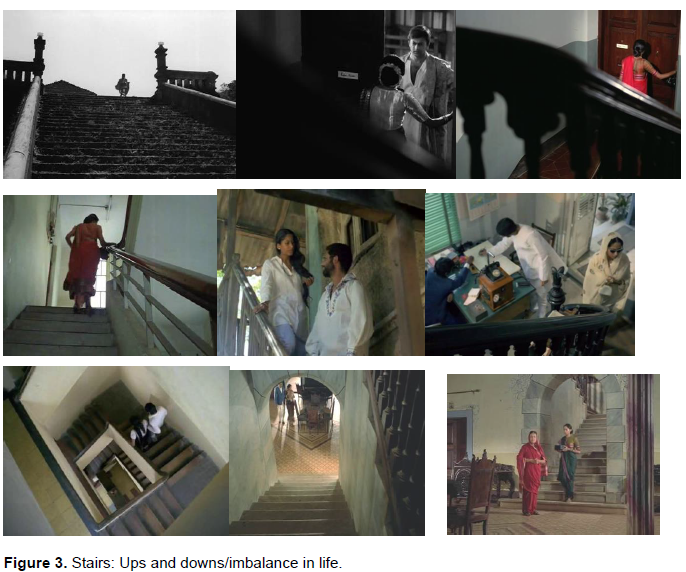 Doors: The other world/two different stories in one space
Mise-en-scene of multiple doors in one frame, distinguish the framing of one character from other. It establishes two worlds, related with same story in one space. As if one person is not able to be in the other frame of reference, the other world (Figure 4). 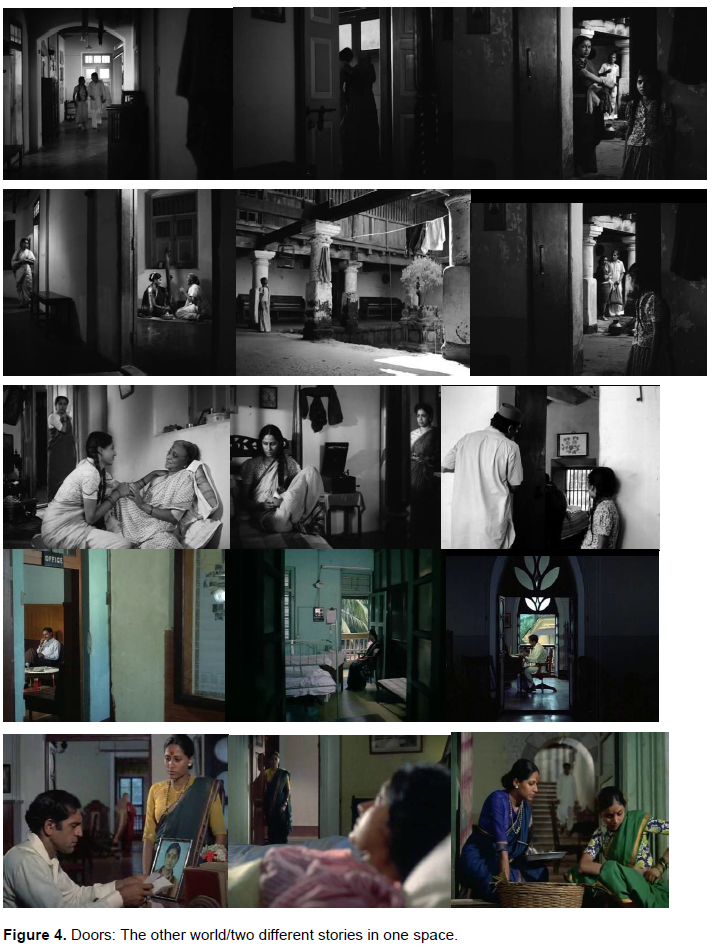