Tuberculosis (TB) continues to be an important public health problem worldwide. It is a leading cause of disability and death in many parts of the world especially in the developing countries. Ethiopia has already a record of history of TB around greater than 58 years. The aim of the study was to determine the prevalence and associated factors of pulmonary tuberculosis (PTB) in Harar TB control center. A health institution based cross sectional study was conducted in Harar town, Eastern Ethiopia from March 5, 2009 to May 7, 2009. All patients who were above 5 years of age and visited Harar TB control center during the study period were enrolled consecutively. Sputum specimens were collected based on standard operating procedures and processed using hot Ziehl-Neelson staining technique. Structured questionnaires were used to collect data on socio-demographic and associated factors. Data were cleaned, coded and entered using EPIDATA version 3.1 and analyzed using SPSS version 16 software. P-values < 0.05 were taken as statistically significant. A total of 108 Pulmonary Tuberculosis (PTB) suspected patients were enrolled in the study. The overall prevalence of PTB was 16.7% where 22.8% of males and 9.8% of females were PTB smear positive. The prevalence of PTB was significantly higher among smokers (50%), alcohol drinkers (29.3%) and rural residents (29.3) (P<0.05). The prevalence of PTB in the study area was considerably high. Smoking, drinking alcohol and rural residence (areas nominated by the government as “rural” which lack important infrastructures) were significant predictors of PTB.  Therefore; health education, early diagnosis and treatment are vital to combat PTB and further longitudinal studies are recommended.

Tuberculosis (TB) is an airborne, infectious disease caused   by   bacteria   of   the  genus  Mycobacterium.  It continues to be a major public health problem worldwide. Every year,  more than 9 million people are suffering from active TB which can spread to others while coughing, talking, sneezing, spiting and singing (The Henry Kaiser foundation, 2009). It remains to be a major cause of morbidity and mortality throughout the world. It is estimated that one-third of the world's population is infected, 8.8 million people develop TB, and 1.45 million people die annually from the disease (World Health Organization (WHO), 2007). In Africa, about 2.8 million incident TB cases and 390 thousands TB deaths occurred in 2009 (World Health Organization (WHO), 2010)

Ethiopia is one of the 22 high TB burden countries. According to WHO 2006 report the incidence rate of all forms of TB was 378 per 100 000 population per year, with 41% TB-HIV co-infection among TB patients (World Health Organization (WHO), 2008; Ethiopian Ministry of Health, 2007). The country is the third most populous country in Africa and number seven in the countries with highest TB burden in the world (Abdi et al., 2009).

Determining the prevalence of pulmonary tuberculosis has a paramount importance for measuring the magnitude of the TB problem and taking appropriate and timely response. It provides useful information for planning a control program and monitoring progress. But in developing countries including Ethiopia; notifications regarding pulmonary tuberculosis are not well established, the diagnostic criteria vary and nation-wide incidence rates are not well available (Demissie et al., 2002).

A cross-sectional study was conducted in Harar TB control center between March 5, 2009 and May 7, 2009. Harar is the Capital city of Harari Regional State, Eastern Ethiopia which is found 511 Km East of Addis Ababa, the capital of Ethiopia.

One hundred eight (108) PTB suspected patients, age greater than 5 years and who did not take anti-TB drugs in the past month, were enrolled consecutively. The patients were informed about the objective of the study. Then sputum specimens were collected  from each patient after getting written consent. Structured questionnaires were used to assess independent variables.

Purulent morning-spot-morning sputum specimens were collected using dry, leak proof, grease free and transparent sputum cups based on the standard operating procedures. The collected samples were processed in the Tuberculosis Laboratory Examination Unit of the Harar TB control center. The sputum was then examined for the presence of acid-fast bacilli (AFB) using the standard Ziehl-Neelsen staining method (International Union against Tuberculosis and Lung Disease, 2000). All positive and negative samples were checked by an experienced laboratory technician in the center. All smears found to be positive were timely communicated with clinicians and were put on treatment. TB treatment and follow-up are provided free of charge at the center. Smear positive PTB was defined as one or more sputum smear examinations positive for acid fast bacilli (AFB). Smear-negative PTB was also defined as three sputum smear examinations negative for AFB but with clinical and radiographic abnormalities consistent with active tuberculosis (Tuberculosis care with TB-HIV co-management, 2007).

As part of the quality control, the patients were trained how to bring a purulent sputum specimen. The laboratory request forms were fully filled with patient’s name, age, sex, identification number, place of residence, date and time of collection. Sputum smears were made using a wire loop which can be easily sterilized. Sprit lamp was used during smearing the sputum for safe procedure. The test results were interpreted and reported based on standard operating procedures. Before leaving the laboratory, the reports were checked for correctness and clarity.

The study was conducted after it was ethically reviewed and approved by the Research and Ethical Committee of Haramaya University, Department of Medical Laboratory Sciences. Then a letter informing the Harar TB control center administrators was written from the University and Permission obtained. All the information obtained from the study participants was coded to maintain confidentiality and data was collected after informed consent  signed. The  positive results  were  timely  reported  to  the clinicians for appropriate intervention.

Socio-demographic characteristics of the participants 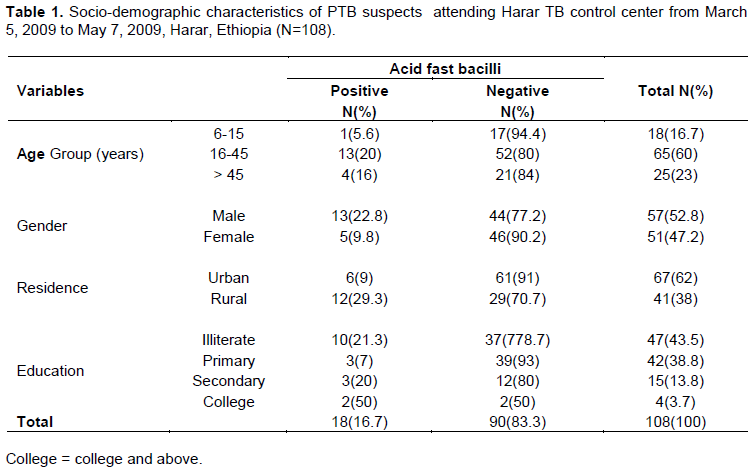 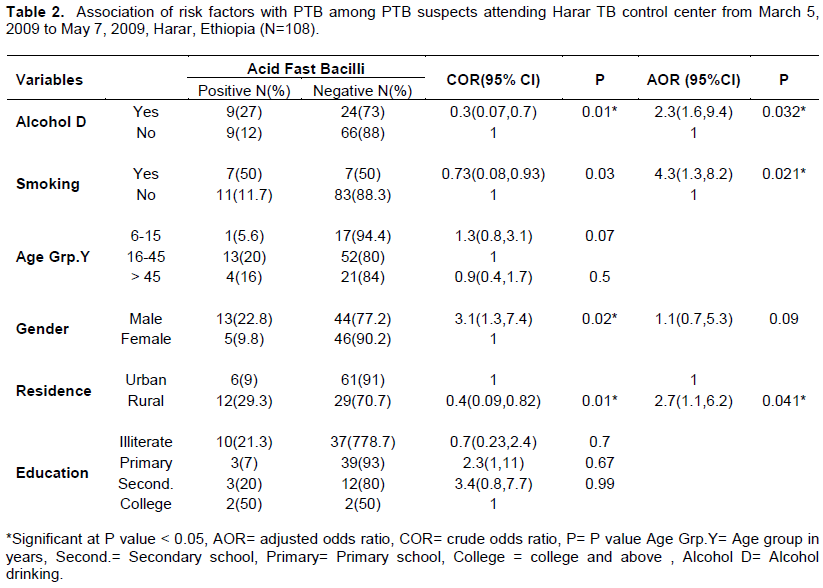 Generally, smear positive PTB was more prevalent in males than females (22.8% versus 9.8%) even though it was not statistically significant. Those PTB suspected patients who habited drinking alcohol, smoke cigarette and live in the rural areas were 2.3, 4.3 and 2.7 times more likely to be smear AFB positive than their counterparts.

The overall prevalence of smear positive pulmonary tuberculosis in this study was 16.7% which indicates that PTB is significantly higher in the regional state of Harari. The finding of this study is almost two times as compared to a study done in Jimma University hospital (8.5%) and Eastern Ethiopia (8.9%) (Gebreselassie, 2003; Abebe et al., 2008) and five times higher than a study from southern Ethiopia (3%) (Shargie et al., 2006).

This could be attributed to differences in awareness Level of the patients, relatively small sample size in our case and difference in study setting as this study is conducted in TB control center. On the other hand the finding of this study is comparable with a study from Nigeria, which had a prevalence of 14.7% (Imam and Oyeyi, 2008).

This study revealed no significant association between smear positivity and age of the patient (P value>0.05).  This is different from a study done in eastern Ethiopia and south west Ethiopia (Abebe et al., 2008; Ali et al., 2009) where smear positivity was strongly associated with age. This difference could be due to small sample size and comparable number of participants in each age category in this study. Findings from various studies throughout the world stated that tuberculosis is affecting every one regardless of age, but in the present study, 13(12%) of smear positive PTB cases were in the age group between 16-45 years although age was not a significant predictor of smear positivity (Holmes et al., 1998; Jerome, 2000). This might be due to the fact that individuals of this age in their life tend to be more active and more interactive with other people, practice smoking, alcohol drinking than the elderly and the very young.

Unlike a study done in eastern Ethiopia (Abebe et al., 2008), the smear positivity of PTB was significantly higher in rural residents than urban dwellers in this study. This could be due to relatively high number of rural participants, different study setting where the previous study was done in prisons (prisons found mostly in urban) and low awareness of rural residents in the present study.  There was not an association of smear positive PTB incidence and gender in the present study contrary to a study done in southwest Ethiopia (Taha et al., 2009) where PTB was significantly higher in males and illiterates. Furthermore the findings of this study are different from a study in Bissau (Gustafson et al., 2004) where males were 2.58 times more likely to be positive for PTB. This could be due to comparable number of both sexes and unknown HIV status in this study.

The distribution of pulmonary tuberculosis was also measured in terms of smoking habit and alcoholism. In this study, the rate of pulmonary tuberculosis was significantly high in those who had habits of drinking of alcohol and in those who are smokers. This finding is consistent with studies done in Jamu district (2002) and Switzerland (2008) (Gupta et al., 2002; Lönnroth et al., 2008).

This study has some limitations. Only direct smear microscopy was used which alone may underestimate the prevalence of PTB in the study population. Other techniques like culture and molecular assays could best estimate the prevalence of PTB among the study subjects. However, due to financial constraints, we were unable to perform these advanced tests. Furthermore the possible associated factors were not exhaustively assessed and the number of participants was comparatively lower.

The prevalence of smear positive  PTB  in  this  particular study population was 16.7% which is significantly higher.  Furthermore, results of the present study revealed that rural residence, smoking and alcoholism were risk factors significantly associated with smear positive pulmonary tuberculosis. Therefore; health education, early diagnosis and treatment are vital to combat PTB and further longitudinal studies are recommended.

The authors declared no conflict of interest exist."