β-thalassemia (Vichinsky, 2005; Cohen et al., 2004) is a common hemoglobin disorder in Southern China especially in Guangdong and Guangxi and one of the major public health problems.In Southern China, the carrier rate of β-thalassemia is 2.54% in Guangdong (Xu et al., 2004) and 6.78% in Guangxi (Cai et al., 2002) where two provinces were thalassemia occurred most frequently. Although blood transfusions are lifesavers for thalassemia patients, long-term transfusion increase the risk of the patients to produce the autoantibodies and alloantibodies (Sadeghian et al., 2009). Alloantibodies increase the difficulty in obtaining compatible blood transfusion (Cheng et al., 2012). Autoantibodies, which are antibodies directed against a patient’s self-antigens, are less widely recognized as a complication of multiple transfusions but may be clinically significant. Auto-antibodies may cause autoimmune hemolytic anemias (AIHA), which will further aggravate the anemias of β-thalassemia major (Meulenbroek et al., 2015).
Autoantibodies may make it difficult to identify co-existing alloantibodies, delaying the identification of appropriately matched blood products, since most warm autoantibodies react with most donors Red Blood Cell (RBC) (Barros et al., 2010). In addition, autoantibodies can be associated with clinically significant warm autoimmune haemolytic anaemia (Bass et al., 2013). In this report, we describe the case of a child with β-thalassemia major who developed both auto- and alloantibodies following long-term transfusion.

Case report
A ten-year-old Chinese child with β-thalassemia major, who received no regular blood transfusion, was presented to the emergency room because of high fever. The fever mainly happened at night and with no obvious cause. The temperature could reach 39.8â„ƒ, accompanied with yellowing of the eyes and skin, paleness, weary asthenia, palpitation and shortness of breath following exercise. Laboratory values on admission were as follows: White blood cell count 4.24 × 109/L, red blood cell count 1.01 × 1012/L, haemoglobin (Hb) 2.7 g/dL, haematocrit %, and platelet count 135 × 109/L, NEUT 59.0%, total bilirubin (TBIL) 217.1 umol/L, indirect bilirubin (IBIL) 199.64 umol/L. chest X- ray report revealed bilateral pulmonary inflammation. Four unit of packed RBC were ready to be transfused to the child to ameliorate the anemia. However, there was a discrepancy between the forward and reverse typing. The direct antiglobulin test (DAT) was positive. Strong agglutination was made by autologous red cell and autoserum in the saline media at room temperature. So a blood group serology test was made to prove whether cold autoantibodies existed.
Antibody screening
Antibody screening was carried out by the tube method. The reaction was performed between patient's autoserum with screening cells (I, II, III DiaMed, Switzerland) and autologous red cells in the saline, polybrene and anti-human globulin media at room tempreture or 37°C.
The absorption-elution test
Patient's autologous red cells were washed for three times with 37â„ƒ saline until no agglutination. 2ml packed red cells was mixed with 2ml antoserum at 4°C for 30 min, and shook every 10 min. Repeat absorption until no agglutination between the autoserum and the screening cells at the he saline media. The packed red cells were eluted at 56°C for 10 min.
Antibody identification
To further investigate to identify the antibody specificity, an 16-cell antibody identification panel (Diapanel, Switzerland) was used. The reaction between spectrum cells and patient's serum post absorption was performed in the saline, polybrene, and anti-human globulin media.
Cross matching
The patient's serum and red cells were treated by absorption and washed, respectively. Cross matching was performed by the improved polybrene kit (Zhongshan Shengke Reagent and Instrument, China) according to the  manufacturer’s instructions.

Direct Coombs test multi-specificity (Anti-IgG+Anti-C3) is monoclonal Anti-IgG4:4+; monoclonal Anti-C3:4+
Antibody screening
As shown in Table 1, all reactions showed strong agglutination in every kind of media at room temperature. However, at the saline media at 37°C, patient's autoserum only agglutinated screening cells I, and at polybrene and anti-human globulin media at 37°C, patient's autoserum agglutinated screening cells I and II), which suggested a combination of autoantibodies and alloantibodies (IgG and IgM). Further identification was needed.
The absorption-elution test
Elution liquid agglutinated all spectrum cells in the saline, polybrene and anti-human globulin media, suggested the existence of cold autoantibodies and no autoantibody specificity. The titers of cold antibodies were 1024 at 4°C and 16 at room temperature.
Blood group identification
As shown in Table 2, there was a discrepancy between the forward and reverse typing before treatment of patient's red cells and serum, while it could be identified as blood group O after treatment.
Antibody identification
As shown in Table 3, alloantibodies including anti-E and anti-N were existed in the patient's serum. In order to confirm the conclusion above, an absorption-elution test was performed between group O red cells (CCDEE, N+) and the patient's serum post cold autoantibodies absorption. The results also demonstrated the existence of allo-anti-E and allo-anti-N. 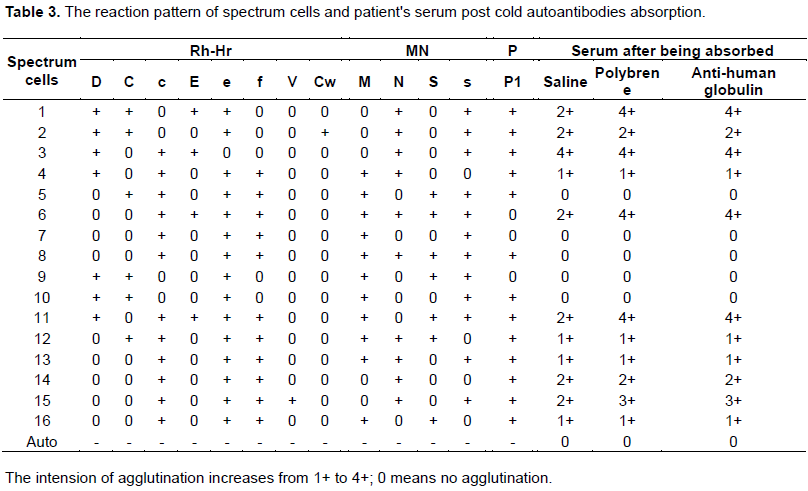 Cross matching test
Cross matching was performed according to the manufacturer's instructions. Finally, four units washed group O red cells without antigen E or antigen N from donors were transfused to the patients and showed no adverse reaction.