The aim of this study was to evaluate the chemical composition and antimicrobial activity of four unexplored Eugenia species: Eugenia brevistyla, Eugenia handroana, Eugenia catharinae and Eugenia stigmatosa. Eight extracts and eighteen fractions were screened for their antibacterial activity against some selected bacteria including Mycoplasma. Phytochemical screening revealed that the plants were rich in terpenes and phenolic compounds. Antimicrobial evaluation revealed that E. handroana (FAEF-EH) and E. brevistyla (FAEF-EB) had the highest activity against Staphylococcus aureus with minimum inhibitory concentration (MIC) of 15.62 µg/ml Mycoplasma while FAEF-EH also presented the best activity with MIC of 62.5 µg/ml against Mycoplasma pneumonia M129. Some isolated compounds, betulinic acid and glutinol, also exhibited antibacterial property against some bacteria used in the study. All the four species studied presented promising antibacterial activity while the active principles are yet to be elucidated.

The plants of the Eugenia genus (Myrtaceae) are widely distributed in tropical and subtropical regions (Fischer et al., 2005; Zaki et al., 2013). They are known for their tasty fruits, and include some Brazilian plants as Eugenia uniflora ("Pitanga"), Eugenia involucrata (“Cereja-do-mato”), Eugenia jambolona (“jambolão”) and Eugenia edulis ("jaboticaba"). This genus comprises a large group of medicinal plants with therapeutic applications of their different medicinal properties, such as anti-inflammatory, hypoglycemic, diuretic, analgesic, antidiarrheal, anti-rheumatic, antibacterial, protection against stomach disorders, etc (Saha et al., 2002; Auricchio and Bacchi, 2003; Bag et al., 2012; Victoria et al., 2012; Famuyiwa and Adebajo, 2012; Garmus et al., 2014). Infections caused by numerous microorganisms are a constant public health problem, and bacterial infections are responsible for several diseases such as pneumonia, meningitis, and endocarditis (Souza et al., 2004). Infections caused by resistant microorganisms and those caused by "commensal" microorganisms, are increasing every year (Muraina et al., 2009). Mycoplasmas are bacteria that belong to the class Mycoplasma, and cause respiratory and urogenital diseases in human beings (Muraina et al., 2009). They are the smallest microorganisms that are capable of self-replication, lacking a cell wall and presenting variable susceptibility to antibiotics (Murray, 2007).
Considering the chemotaxonomy and the important activities already described for the Eugenia genus, the reported increase in antibiotic resistance, as well as the increase in infections caused by Mycoplasma, four Brazilian plants of the Eugenia species E. brevistyla, E. handroana, E. catharinae and E. stigmatosa have been evaluated for their chemical compositions and antimicrobial activity against selected bacteria including Mycoplasma.

Plant material
The place and season (year) of collection of each species are shown in Table 1.

Isolation of the chemical constituents
In order to isolate the major compounds, all the fractions were separately subjected to open silica gel column chromatography (CC) eluted with hexane: ethyl acetate gradient. Thin layer chromatography, used to monitor purity, was carried out on a pre-coated Merck Kieselgel 60 F254 plate (0.25 mm) eluted with hexane: ethyl acetate gradient and the spots were compared with the standards. The compounds were identified by conventional spectral data (NMR, IR, MS) and compared with standard samples and the literature. In some cases, the compounds were subjected to gas mass spectrometry (GC/MS) to confirm their identities. The isolated compounds and the yields are shown in Table 3. The molecular structures are shown in Figure 1. The RMN spectral dates were: 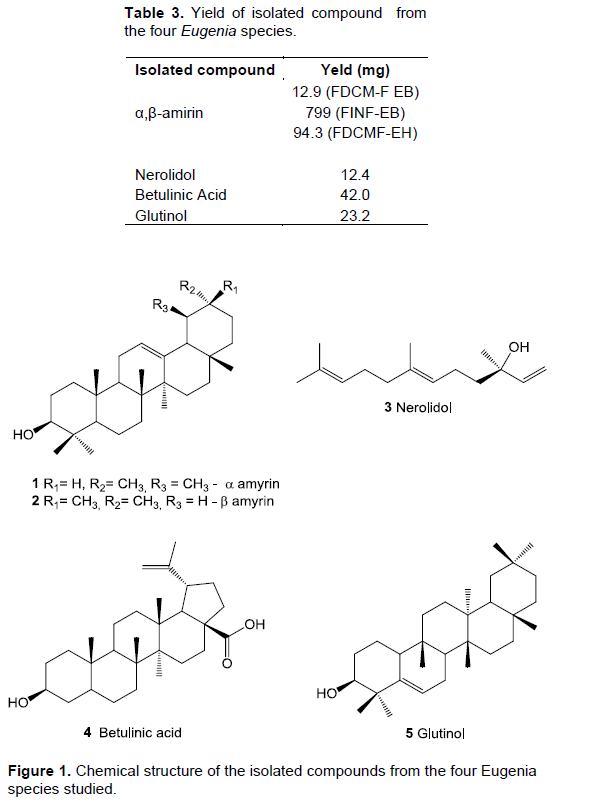 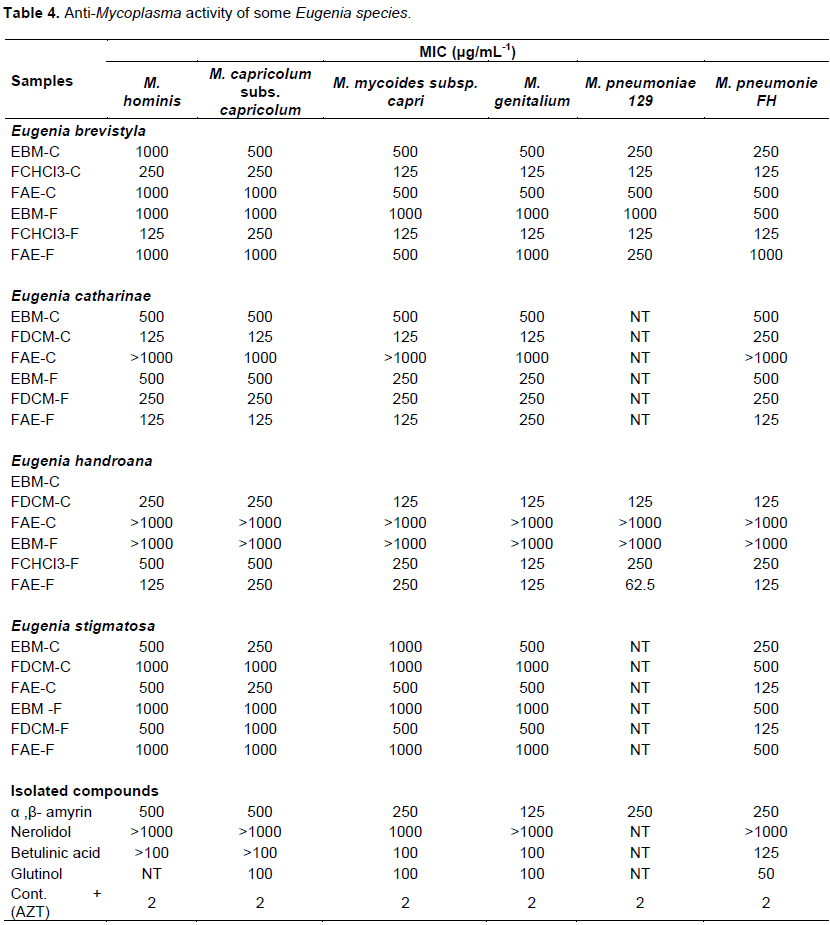 Of all samples tested, the highest activity was observed against Staphylococcus aureus. S. aureus, a Gram-positive bacterium is responsible for a large number of infections ranging from simple infections, such as acne or cellulitis to severe infections like pneumonia, meningitis, endocarditis, toxic shock syndrome, and sepsis. This is particularly true for the infections caused by methicillin-resistant S. aureus (MRSA), which is most often resistant to multiple antibiotic classes and is responsible for the majority of infections (Boucher et al., 2010; Lin et al., 2013; Bolt et al., 2017).
The FAE-F of E. handroana (FAEF-EH) and the FAE-F of E. brevistyla (FAEF-EB) exhibited pronounced antibacterial activity against S. aureus (MIC, 15.62 μg ml-1). From the FAEF-EH, a mixture of α and β-amyrin which is known to have an important anti-bacterial activity against S. aureus (Jain et al., 2001) was isolated. Other fractions such as the EBMC-EB, FAEC-EB, EBMF-EB, FAEC-EH and EBMF-EH showed good results against S. aureus (MIC, 31.25 μg ml-1). The results observed for E. handroana and E. brevistyla were the most promising. Antibacterial activity against S. aureus by other species of Eugenia such as E. caryophyllata and E. brasiliensis had been reported (Magina et al., 2012; Prakash et al., 2012). It is interesting to note that the fractions with higher polarity (ethyl acetate) showed better activity. On the other hand, the Gram-negative bacteria such as E. coli were not sensitive to the extracts and fractions until 1000 μg ml-1.
Antifungal evaluation against Candida albicans showed that the extract and fractions from the stem of E. stigmatosa had the best activity with MIC of 125 μg ml-1 for the EBM-C and 250 μg ml-1 for FAEC- ES. The EMBC of E. catharinae also inhibited fungal growth at MIC = 250 μg ml-1. Some Eugenia species as E. calycina (Ferreira et al., 2014), E. caryophyllata (Mansourian et al., 2014), and E. jambolana (Satish et al., 2008) have been reported to have antifungal activity.
Among the tested samples, the highest activity against the Mycoplasma was observed in the FAEF-EH fraction against M. pneumoniae M129 (62.5 µg ml-1). However, despite this pronounced activity, for the other species of Mycoplasma, the samples that presented the best activity were nonpolar fractions. FCHCl3F-EB and FDCMC-EC showed MIC of 125 µg ml-1 against some samples tested. It is likely that highest presence of nonpolar compounds such as fatty acids and triterpenes in high quantity favored the action against the Mycoplasma strains.
Previous study by Tenfen et al. (2017) has attributed antimycoplasma activity of E. platysema to the presence of triterpenes. Another study by Zatelli et al. (2015) attributed anti-Mycoplasma activity of E. hiemalis to the essential oil component of the species. The isolated compounds in this study such as nerolidol (3) and the mixture of α,β amyrin (1,2) were inactive against the Mycoplasma strains. On the other hand, the compounds betulinic acid (4) and glutinol (5) showed encouraging activity against some strains tested.
Betulinic acid (4), was considered inactive against strains of S. aureus, E. coli and C. albicans (MIC > 128 µg ml-1) (Woldemichae et al., 2003), and considered active against some strains of Mycoplasma tested in this study, especially against M. pneumoniae FH, with MIC of12.5 µg ml-1, demonstrating selectivity for this species. The M. pneumoniae FH is responsible for important diseases such as pneumonias, mainly in immunocompromised patients. It has a genetic structure different from the other species being considered more sensitive. On the other hand, glutinol (5) demonstrates antiviral, antifungal activity and potent anti-inflammatory activity as previously described (Madureira et al., 2003). Although  some  studies  correlate  the  presence  of   this compound with antibacterial activity, there are no studies with this compound isolated against strains of Mycoplasma.
It is well-known that nerolidol (3) exhibits moderate antibacterial activity against S. aureus. However, its mechanism of action is related to intracellular K + leakage through the interaction of the carbonic chain of the molecule with the bacterial cell wall (Inoue et al., 2004). Since Mycoplasma do not have cell walls, they are naturally resistant to molecules that act by this mechanism of action (MIC > 1000 µg ml-1). Several studies attribute antibacterial activity for α,β-amyrin (1,2) against S. aureus, E. coli and C. albicans, however the mechanisms of action has not yet been elucidated. Regarding the general antimicrobial effects, all the four species studied presented interesting antibacterial and antifungal activity. It is important to emphasize that this is the first work done to evaluate the chemical composition and antimicrobial activity of E. handroana, E. brevistyla, E. catharinae and E. stigmatosa. It is also the first study to evaluate the anti-Mycoplasma activity of α,β amyrin, nerolidol,  betulinic acid, and glutinol.
The results found in this study are important because some of the microorganisms used in the study are responsible for various diseases, such as pneumonia, mastitis, skin and soft tissues infections, osteomyelitis, endocarditis,  vaginitis,  urethritis,  and  pyelonephritis in humans (Boucher et al., 2010; Cordova et al., 2010). Reports of resistance of cell wall bacteria and Mycoplasma to conventional treatments have also increased (Yechouron et al., 1992; Ma et al., 2017) and studies are in progress to determine other active principles present in the most promising species such as E. brevistyla and E. handroana.