One of the initial plants that have a long historical use with sustaining mankind life is date palm (Phoenix dactylifera L., Arecaceae) mainly distributed in the desert and semi-desert areas of the world (Bhat and Al-Daihan, 2012; Ghahraman, 1998; Hajian, 2005). In Iran, date palm has been cultivated in 13 provinces. Sistan and Baluchistan province, with 45988 hectares of dry and irrigated groves, has first position of date cultivation in the country )Jahad Agricultural Organizations Reports). In this province, Saravan has many date palm gardens. More than 70 cultivars of date palm exist in this region.

Date palm is used  as  a  multi-purpose  tree  by  native people of Saravan. It is used as food, animal feed, medicine, buildings material, fencing, different household articles, decoration and handcrafts, and therefore it is respected as a “life” tree among the Baluch tribes (Sadeghi and Kuhestani, 2014).

The fruit of this species is used as medicine for cough, blood purgation, anemia, and constipation. There are some reports of the enhancing effect of date fruit on haemagglutinating antibody titers, plaque-forming cell counts in spleen, and macrophage migration index as an index of cell-mediated immunity (Vayalil, 2002). An important carcinogenic agent are free radicals, inhibited by antioxidants. The significance of antioxidants has been increasing because of their high capability in scavenging free radicals associated to variety of many damaging diseases (Haider et al., 2013). Antioxidants are molecules which can safely interact with free radicals and terminate the chain reaction before vital molecules are damaged. Antioxidants play an important role in providing protection to humans against infection and degenerative diseases (Sadeghi et al., 2014). Wide investigation has been done for identification of natural antioxidant that may be used for prevention of cancer. Some researchers have reported the antioxidant activity of date palm. Date fruits possessed a variety of enzymatic and non-enzymatic antioxidant compounds and have anti-mutagenic and anticancer activities with varying amount in different cultivars (Abbas et al., 2008; Biglari et al., 2008; Awad et al., 2011). In vitro studies have shown that the aqueous extract of date fruit is a powerful scavenger of hydroxyl radicals and superoxide and to restrain protein oxidation and iron-induced lipid per-oxidation in the rat brain homogenate in a concentration dependent manner (Mohamed and Al-Okbi, 2004; Allaith and Abdul, 2005; Al-Qarawi et al., 2008; Vayalil, 2002). In spite of high medicinal value of date palm, biological studies on the health benefits are inadequate in Iran. Antioxidant capacity of some date varieties from Bushehr and Abadan was investigated by Khanavi et al. (2009) and Siahpoosh et al. (2012), respectively. Moreover, Shams Ardekani determined the antioxidant activity and total phenolic compounds of 14 different varieties of date palm (P. dactylifera L., Arecaceae) seed extracts. It is essential that compositional and biological studies in plant foods be carried out to take into account various factors such as cultivars, seasons and pre- and post-har-vest conditions that may affect the chemical composition of plant foods. In this study, the ethanol extracts of six native date varieties grown in Saravan were screened for their antioxidant activities and  total phenol contents.

Saravan is located in the Southern-east of  Sistan  and  Baluchistan province that has many palm gardens. Most of the plantations and groves of date palm in Saravan are concentrated in MokSokhteh (8000 hectares) of Jalgh district. About 56 cultivars have been identified in Saravan (Agricultural Jihad of Saravan, unpublished data), that their prominent are Mozafati, Rabbi, Zardan, Rengeno, Makili, Halile, Shendeshkan, Sabzo, Popo, Kalegi, Sohrok, Pimazoo, Khoshkij, Kroch, and Baranshahi (Sadegi and Kuhestani, 2014). Some of these cultivars has been shown in Figure 1 (Supplementary Figures). Six cultivars, including Zardan, Mozafati, Halile, Rabbi, Sohrok and Kalegi were kindly provided by Ms. Uosefi from Saravan date garden. Fresh and ripe fruits, without any physical and insect damage and fungal infections, were selected and used for all experiments. 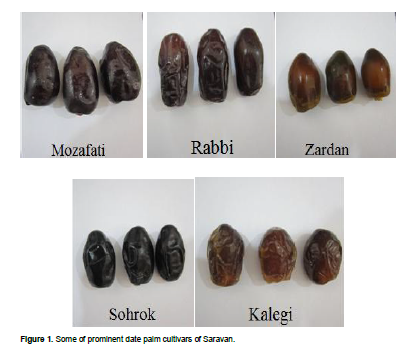 The fruits were washed and air-dried. Then, they were further dried at about 50°C for 4 h. After that Date fruits of each variety were se-parately milled in a heavy-duty grinder to pass 1 to 2 mm screens. A portion of dried date material (40 g) was extracted with ethanol using soaking for 48 h. After filtration and solvent evaporation, extracts were stored in sealed vials at 4°C until biological testing.

Total phenol content was determined by Folin Ciocalteu reagent. A dilute solution of methanolic extract (0.05:1 g/ml) or gallic acid (standard phenolic compound) was mixed with Folin Ciocalteu rea-gent (2.5 ml, 1:10 diluted with distilled water) and aqueous Na2CO3 (2 ml, 5%). The mixture was allowed to stand for 30 min and the phenols were determined by colorimetry at 765 nm (Wojdylo et al., 2007). The total phenolic content was determined as mg of gallic acid equivalent using an equation obtained from the standard gallic acid calibration graph.

The free radical scavenging activity of the plant extracts was performed according to the method of Brand-Williams et al. (1995), 2, 2-diphenyl-1 picryl hydrazyl (DPPH) free radical (Thaipong et al., 2006). 2.0 ml of different extracts with 500, 1000, 2000μgr/ ml range of concentrations, was mixed with DPPH (0.1 mM), after 60 min standing the absorbance of the mixture was measured at 517 nm against methanol as the blank on a UV/visible light spectro-photometer (UNICO UV 2100). Triplicate measurements were made and the radical scavenging activity was calculated by the per-centage of DPPH that was scavenged using the following formula:

All analyses were run in triplicates and standard deviation (SD) was calculated.

The antioxidant capacity of plant extracts by iron reduction (FRAP assay) was done according to Benzie and Strain (1996) with some modifications. FRAP reagent was prepared right away before analysis by  mixing  25 ml acetate buffer (300 mM), 2.5 ml, 2,  4, 6- tripyridyl-s-triazine (TPTZ) solution (10 mM), and 2.5 ml FeCl3.6H2O solution (20 mM). Date extracts (1000 μg/ml) were prepared by different solvent. 200 μg/ml of exteracts reacted with 1.8 ml of the FRAP reagent and was incubated at 37°C for 30 min in the dark condition before being used. Then absorbance of the colored product [ferrous tripyridyltriazine complex] was determined at 595 nm against distilled water blank. FeSO4.7H2O (100 to 1000 μM) was used for calibration. Ascorbic acid was used as positive control. Results are expressed as mM Fe2+/mg sample (Wojdylo et al., 2007; Chaouche et al., 2013).

All measurements include antioxidant activities and total phenolic content were done in triplicates to test the reproducibility of them. SPSS 15.0 (statistical soft ware) was used for statistical analysis of results. Correlations among obtained data were calculated using Pearson’s correlation coefficient (r). The values of P<0.01 were considered statistically significant. All results are presented as mean ± standard error.

The level of phenolic compounds in ethanolic extracts measured according to the Folin-Ciocalteu method and antioxidant activities of date varieties is presented in Table 1. The total amount of phenolic contents varied significantly between 8.45 and 4.66 mg gallic acid/g dry weight.

Total phenolic contents and antioxidants activity of the six varieties decreased in the following order: Zardan > Mozafati > Halile > Rabbi > Sohrok > Kalegi. Table 2 shows the mean scores of some physical characteristics of date cultivars that were considered for antioxidant and total phenolic evaluation. Due to variety and growth con-ditions shape, color, size, weight and moisture contents vary (Haider et al., 2013). Significant differences between the results were likely due to genotopic and environ-mental differences (namely, fertility, harvesting and pest exposure).

The results of correlation analysis indicated a significant negative relationship between total phenolic contents and antioxidant activities measured by DPPH (r= -0.974, P<0.01) and positive association by FRAP (r= 0.975, P<0.01) methods. Visual representation of DPPH radical-scavenging activity and FRAP assay for differnnt varities of dates is as shown in Figure 2. 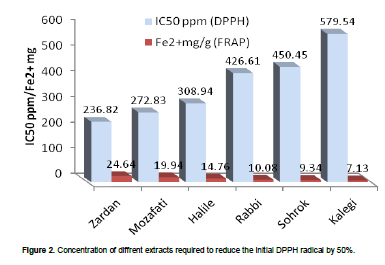 Antioxidants have various physicochemical properties and then may utilize different mechanisms in different assays  and   conditions.   A   number   of   methods   and modifications have been proposed for antioxidant power measurement. Total antioxidant activity, metal chelation, radical scavenging (DPPH) effects and reducing power as well as destructive activities to active oxygen species such as the superoxide anion radical, hydroxyl radical, and hydrogen peroxide are mainly used for this aim )Aksoy et al., 2013). Owing to, a single method could not assay whole antioxidant activity, therefore application and combination of several tests recommended to provide a better description (Prior et al., 2005; Frankel and Mayer, 2000).

Currently, there has been no agreement on one preferred method over others in measuring antioxidant capacities of food materials (Wu et al., 2004). DPPH and FRAP are among the most popular spectrophotometric methods widely used in antioxidant activity assessment. In this study, both were used. Results show that Zardan and Mozafati cultivars had the highest total phenolic contents between other cultivars. These observed dif-ferences can be related to cultivar specific inherited characteristics or location conditions including growing condition and soil type, as well as climatic factors, amount of sunlight received, fertilizer practices, disease and pest exposure, processing, storage conditions and handling (Al-Turki et al., 2010).

Moreover, ranking of investigated cultivars for antioxidant power indicated that Zardan has the highest antioxidant effects among other varieties in two assess-ment methods. The ability of date extract to prevent the generation of free radicals through iron chelating was the major antioxidant mechanism responsible for the observed antioxidant activity as compared to DPPH method. In DPPH, ethanol extract showed less potency than the control butylated hydroxytoluene (BHT, IC50=4.85 ppm), because it may be the DPPH scavenging ability of the extract attributed to its hydrogen donating ability (Ebrahimzadeh et al., 2008).

However, the chemical constituents present in the extract, which are responsible for antioxidant activity, need to be investigated. But it is obvious that the phenolic compounds in the extracts may be responsible for such activity. Various phenolic compounds (e.g. benzoic and cinnamic acid, coumarins, tannins, lignins, lignans, flavonoids, etc) possess a diverse range of beneficial biological functions, including antioxidant activity. Unique structure and high tendency of phenolic compounds for metal chelation and their redox properties allow them to act as reducing agents, hydrogen donators, and singlet oxygen quenchers and causes antioxidant activity (Bhatt and Negi, 2012; Huda-Faujan et al., 2009; Huang et al., 2009; Morgan et al., 1997). The date fruit pulp is wealthy in phytochemicals like sterols, phenolics, carotenoids, procyanidins, anthocyanins and flavonoids. The concentrations and ratio of these constituents depend on the stage of fruit picking, type of the fruit, location and soil conditions   (Abdelhak   et  al.,  2005;  Allaith  and  Abdul, 2008). There are some reports on the antioxidant activity and presence of polyphenolic compounds in date fruit varieties. Shams Ardekani et al. (2010), Khanavi et al. (2009) and Biglari et al. (2008) investigated antioxidant activity of some date varieties. They demonstrate the potential of Iranian dates as antioxidant functional food ingredients. Results of this work are in agreement with that reported by Khanavi (2009) who found that total phenol contents of dates were 308 and 276 mg/100 g in methanol and water extracts, respectively (Shams Ardekani et al., 2010; Khanavi et al., 2009; Biglari et al., 2008). Methods that used to measure antioxidant activity in this study, are based on electron capture mechanisms, therefore application of other assessment with hy-drogen donating, radical scavenging mechanisms are recommended for more investigation.

Generally, various type of date palm have different physicochemical properties including antioxidant activity, dry matter and total phenolics contents. Total phenolics assay may be sufficient to evaluate antioxidant properties in date fruit. In the present study, ethanol extract of Zardan bears comparable phenolics group and antioxidant activity to the standard compounds. Free radicals are often generated as byproducts of biological reactions or from exogenous factors. The involve-ments of free radicals in the pathogenesis of a large number of diseases are well documented. A potent scavenger of free radicals may serve as a possible preventative intervention for the di-seases (Ebrahimzadeh et al., 2008). The suitable antioxidant activity of date palm supports its possi-ble use as a natural antioxidant in food industries and other pharmaceutical preparations. In summary, the present study demonstrates the potential of Iranian dates as antioxidant functional food ingredients. The crude ethanolic extract me-rits further experiments and thus identification of the metabolites responsible for such pharmacological activities is suggested.

The authors thank the research authority of Higher Educational Complex of Saravan, for financial support of this research project.

The authors report no declarations of interest.