In terms of biological diversity Croatia is one of the richest European countries. Croatian flora, with about 5000 species and subspecies is characterized by a markedly high level of diversity per unit of surface (Nikolic et al., 2015). Genus Edraianthus in flora Europe includes 9 species, 6 of which belong to the flora Croatica (Tutin et. al., 1980: Nikolic, 2018). Edraianthus pumilio (Schult.) A. DC. is stenoendemic species of flowering  plant  in  the family Campanulaceae, native to Dalmatia in Southern Croatia. It is a strictly protected and almost endangered species. It is widespread on Mount Biokovo, near Makarska (Nikolic, 2018). The plant is highly heliophilic, thermophilic and xerophilic. It grows on limestone-rock cracks. This is a low-growing perennial plant that grows in dense pads. Linear and silver leaves grow in tufts. The underside of leaves is naked, while upper side  of  leaves is hairy. The flowers are violet-blue bells, while fruits are capsules. The plant belongs to alliance Seslerion juncifoliae Horvat 1930 (Nikolic et al., 2015).

According to molecular phylogeny analysis the E. pumilio and E. dinaricus are two very closely related species. Both species are closely restricted to the mountains of Middle Dalmatia. These two species are quite different from other Edraianthus species in terms of morphological features such as leaf, inflorescence and habits (Stefanović et al., 2008).

Chemical taxonomy at this genus is poorly researched.  The chemical structures of phenolics and terpenoids are often specific and restricted to taxonomically related organisms and hence useful in classification (Singh, 2016). Secondary metabolites and beneficial biological effects of E. pumilio have not been investigated so far. These compounds have shown to have antioxidant, antimicrobial, antiinflammatory, anticarcinogenic, antimutagenic and antiallergic properties (Roy et al., 2017; Murugesan and Deviponnuswamy, 2014; Bharti et al., 2012: Namita and Mukesh, 2012; Allesiani et al., 2010).

Antioxidants are vital substances, which possess the ability to protect the body from damages caused by free radical-induced oxidative stress (Birben et al., 2012). A large amount of evidence has demonstrated that oxidative stress is intimately involved in age-related neurodegenerative diseases. There have been a number of studies which examined the positive benefits of antioxidants to reduce or to block neuronal death occurring in the pathophysiology of these disorders (Loizzo, 2009; Ramassamy et al., 2006).

Acetylcholinesterase (AChE) is the enzyme involved in the hydrolysis of acetylcholine neurotransmitter which plays important role in memory and cognition. Low level of AChE in brain is usually connected with neurodegenerative disease, that is, Alzheimer’s disease (AD). The most promising approaches in treating AD are usually based on AChE inhibitors (Wszelaki et al., 2010; Menichini et al., 2009).

Therefore, the aim of this work was to determine the phytochemical composition of volatile oil, total phenolic content of aqueous extract as well as antioxidant and acetylcholinesterase inhibition potential of volatile oil and aqueous extract isolated from E. pumilio. There are no known records of this plant being used for medicinal purposes but this or another research may contribute otherwise. Also, the analysis of volatile components can contribute to a better determination of the species E. pumilio. To the best of our knowledge, this is the first work that shows the phytochemical and  biological  profile of this species.

Air-dried aerial parts of plants were hydro-distilled using Clavenger apparatus for 3 h. Obtained essential oil was dried over anhydrous Na2SO4 and stored in sealed vials, under - 20 oC before use (Nikbin et al., 2014).

Air-dried aerial parts of plants and water were placed in an Erlenmeyer flask and refluxed in an ultrasound bath for 2 h. The mixture was then ﬁltered through a ﬁlter paper and evaporated under vacuum at 40°C and stored at -20°C in fridge before use.

Total phenolic content was measured using Folin-Cocalteu spectrophotometric method (Singleton and Rossi, 1965; Katalinic et al., 2013) and gallic acid as a standard. 15 ml water and Folin-Ciocalteu reagent (1.25 ml, diluted 1:2) were added to the sample solution (0.25 ml, 1 mg/ml). The resulting solution was mixed. After 3 min, in solution were added Na2CO3 (3.75 ml, 20%) and water to volume of 25 ml. The resulting mixture was then left for 2 h. The absorbance of the resulting blue color was measured at 765 nm. The concentration of the total phenolic content was calculated by using  an  equation  obtained  from gallic acid calibration curve and expressed as mg gallic acid equivalent per gram of extract (mg GAE/g extract). The determination of total phenolic content was carried out in triplicate and the results were expressed as mean ± standard deviations.

Capacity of DPPH radical scavenging by volatile oil and aqueous extract was measured according to the method of Brand-Williams et al. (1995) (Katalinic et al., 2010).  DPPH method is based on the reaction between free DPPH radicals and antioxidants. As a result, a stable non-radical form of the DPPH is obtained, with simultaneous change of the violet color to pale yellow. The decrease in absorbance was measured at 517 nm. DPPH radical solution was prepared by dissolving the stock solution (4 mg of DPPH in 100 ml of ethanol). To optimize the conditions used to run the DPPH assay in microplates, 10 µl of sample (1 mg/ml) was placed in a well and 290 µI of DPPH solution was added. The mixture was shaken vigorously and left to stand at room temperature in the dark. The decrease in the absorbance was measured after 1 h, with ethanol as blank. The DPPH radical scavenging activity of the sample was calculated according to the formula:

The reducing power of volatile oil and aqueous extract were also performed using FRAP method (ferric reducing antioxidant power) (Skroza et al., 2015; Benzie and Strain, 1996). FRAP method is based on the reduction of ferric-tripyridyltriazine (Fe3+-TPTZ) complex to ferrous (Fe2+) complex with an intense blue color and maximum absorption at 593 nm. The method was performed in 96-well microplates, with slight modifications. The FRAP solution was freshly prepared by mixing 0.3 M acetate buffer (pH = 3.6) and 10 mM TPTZ in 40 mM HCl and 20 mM FeCl3 in a ratio of 10:1:1 (by volume). The assay was carried out by placing 10 µl of the sample (1 mg/ml) and 300 µl of FRAP reagent in a well. The absorbance was measured after 4 min. The reducing power of sample was calculated by comparing with the reaction signal given by solution of Fe2+ ions in known concentration and expressed as µmol/I Fe2+. BHA was used as positive control. The determination of antioxidant capacity, performed by both methods was carried out in triplicate and the results were expressed as mean ± standard deviations. Tested stock solution concentration was 1 mg/ml.

Acetylcholinesterase (AChE) inhibition potential of volatile oil and aqueous extract were carried out by a slightly modified Ellman assay (Politeo et al., 2018; Ellman, 1961). A typical run consisted of 180 mI of phosphate buffer (0.1 M, pH 8), 10 µl of DTNB (at a final concentration of 0.3 mM prepared in 0.1 M phosphate buffer pH 7 with 0.12 M sodium bicarbonate added for stability), 10 µl of sample solution (dissolved in 80% EtOH), and 10 µl of AChE solution (with final concentration 0.03 U/ml). Reactants were mixed in a 96-well plate wells and reaction was initiated by adding 10 µl of acetylthiocholine iodide (ATChI to reach a final concentration of  0.5 mM). As a negative control, 80% EtOH was used instead of sample solution. Non-enzymatic hydrolysis was also monitored by measurement of two blank runs for each run. All spectrophotometric measurements were performed at 405 nm and at room temperature for 6 min. The results are expressed as percentage inhibition of enzyme activity. Eserine was used as positive control. The determination of acetylcholinesterase inhibition potential was carried out in triplicate and the results were expressed as mean ± standard deviations. Tested stock solution concentration of E. pumilio samples was 1 mg/mL, while stock solution concentration of eserine was 0.1 mg/ml. 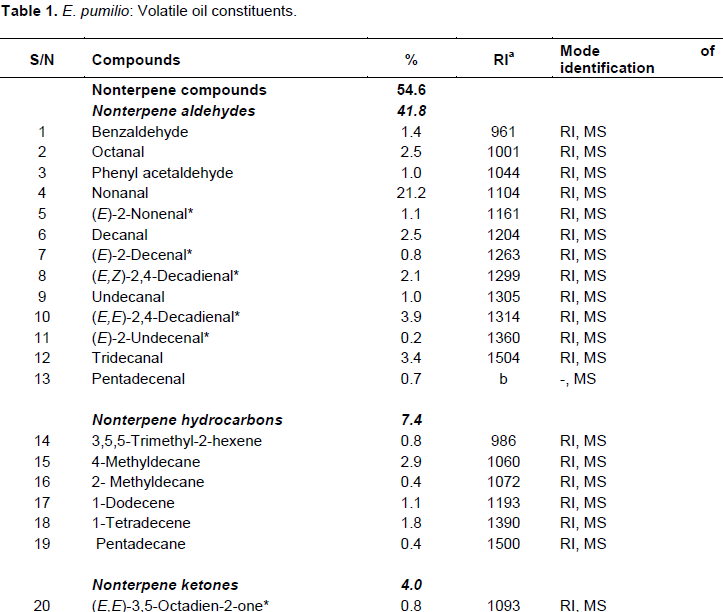 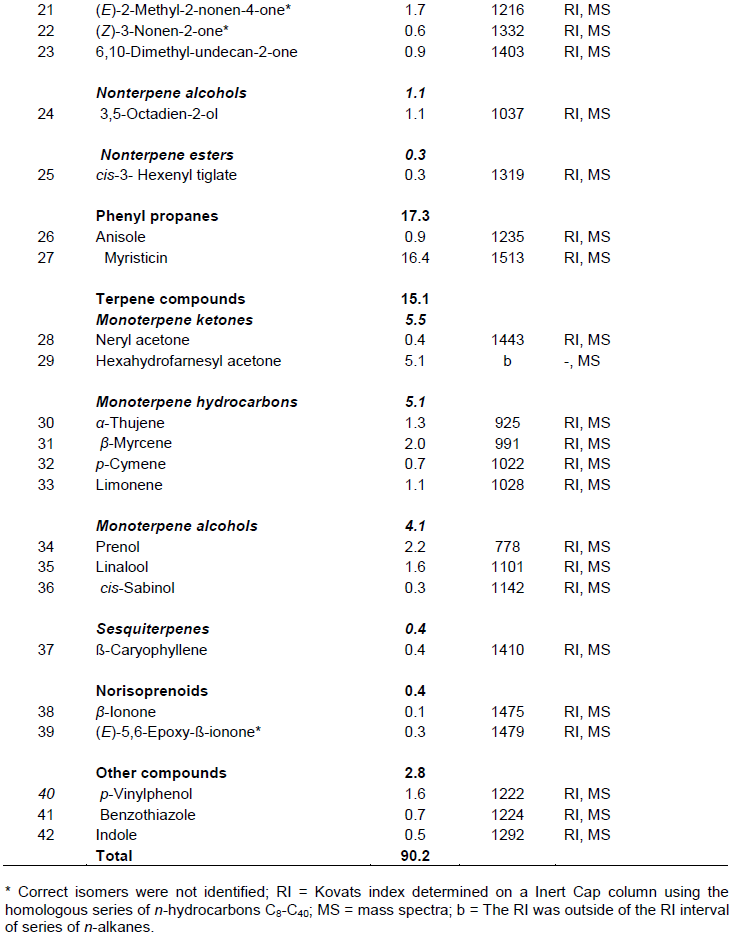 The total phenolic content of E. pumilio aqueous extract (the extraction yields was 14.8%, w/w) was determined using Folin-Ciocalteu reagent and external calibration with gallic acid, according to the method previously described by Singleton and Rossi (Katalinic et al., 2013; Singleton and Rossi, 1965). The total phenolic content was 30.6 ± 1.1 mg GAE/g extract (Table 2). 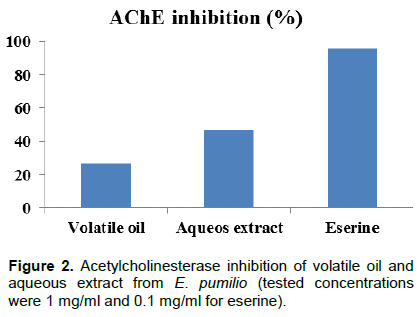 Future studies of phytochemical compound should focus on other possible biological effects such as anti-inflammatory, antidiarrheal, and anticancer.

This work was supported by the Croatian Science Foundation; project IP-2014-09-6897.