Cinnamon is an evergreen tree belonging to the genus Cinnamomun; it is commonly founded in various tropical countries, consisting of more than 250 species of trees and shrubs in the Lauraceae family. This plant has had great medicinal importance in traditional medicine since ancient times. In this research, the chemical composition of the essential oil of Cinnamomum zeylanicum Nees was evaluated. The samples were extracted from the leaves and stem. The main components founded from the leaves were: Benzyl benzoate (74.2%), α-felandrene (6.9%), α-pinene (3.0%), and linalool (2.7%). Cinnamaldehyde (31%), linalool (13.3%), benzyl benzoate (11.3%), and cinnamaldehyde acetate (8.2%) stood out in the essential oil of the stem. The antioxidant activity was determined by the DPPH method, obtaining an inhibition percentage for concentrations of 80 ï­g mL-1, 59.17 ± 0.11% for the leaves and 61.34 ± 0.11% for the stem.

Cinnamomum zeylanicum is a tropical and subtropical climate plant, belonging to the Lauraceae family; it consisted of 49 genera, and has over 3,000 species (Marques,    2001).    Throughout    history,    China    has acknowledge the importance of the species for since 2,500 years B. C. The Egyptians used it to embalm the dead; in the 18th century, it spread throughout the world: it was used for flavor, perfume and also  applied  in  white wines (Negraes, 2003).

Cinnamon essential oil has been known for its abundance in secondary metabolites such as phenolic compounds including eugenol found between 4 and 10%; aldehydes such as cinnamaldehyde found between 60-75%. The latter compound gives flavor to the cinnamon (Sesanayake and Wijesekera, 2004).

Cinnamon has microbiological and antimicrobial properties (Chang et al., 2001), including its use as a food preservative, for flavor and as a pharmacological applications (Marques, 2001).

According to BRASIL (2010), cinnamon bark has approximately 1.0% of essential oil, in which 70-90% of the main constituent is trans-cinnamaldehyde. Cinnamon extract has a high antioxidant potential in humans, and can be used in patients with high oxidative stress (Ranjbar et al., 2006). It has also been used in Indian and Chinese medicine for the treatment of stomach diseases such as gastritis, blood circulation, and liver diseases (Lee and Balick, 2005). The objective of this work is to analyze the chemical constituents in the essential oil of C. zeylanicum Nees, extracted from the leaves and the stem, as well as to evaluate the antioxidant activity of said essential oils using the DPPH method. It is important to study the chemical composition of the essential oil of cinnamon in its different parts of the tree since different therapeutic properties are attributed to said oil.

The samples were collected in the municipality of Boa Vista-Roraima (Brazil) with coordinates 2°49'46''N, 60°43'11''W. The botanical identification was previously carried out at the Herbarium of the National Institute for Amazonian Research (INPA) in the city from Manaus (Brazil), under registration number 268121. They were subsequently taken to the Environmental Chemistry Laboratory of the Research and Graduate Studies in Science and Technology Center (NPPGCT) at the Federal University of Roraima. The samples were washed, cut and separated in butcher, leaves and cloves, whose essential oil was extracted in triplicate for 4 h using hydro- distillation technique with water vapor entrainment. The essential oil was separated from the hydrolate and stored in an amber bottle and refrigerated until the different analyses were carried out; a part of the essential oil was sent to the Chemistry Department of the Federal University of Minas Gerais (UFMG), where the chromatography and another part of the oil was used to carry out the analysis of antioxidant activity at the Analytical Center of NPPGCT of Federal University of Roraima (UFRR).

For the analysis of the antioxidant activity, the method of reduction of the 2,2, diphenyl-2-picrilhidrazil (DPPH) was used, according to the methodology proposed by Kondo (2002); firstly, the crude samples of essential oil were solubilized in ethanol, in concentrations of 8, 20, 40 and 80 mg ml-1 and subsequently a solution of DPPH in ethanol of 60 mM was prepared. The samples were prepared by mixing 50 ml of each extract with 1950 ml of DPPH solution and a control solution, where the sample volume was replaced by 50 ml of ethanol, and absorbance recording were taken at 517 nm after 30 min. The percentage of inhibition was calculated using the Equation 1:

In Table 1, the chemical constituents in the essential oil of cinnamon are presented for the two parts studied. 15 chemical constituents were identified on the leaves and 15 constituents on the stem. In Figures 1 and 2, the respective chromatograms are shown and in Table 2, the chemical structures of the main constituents. In the essential oil extracted from the cinnamon leaves, the main component was ethyl benzoate with 74.2%, followed by α- phellandrene with 6.9%, α -pinene with 3.0% and linalool with 2.7%. In the cinnamon stem, the major component was cinnamaldehyde with 31.0% followed by linalool with 13.3%; this constituent is in higher concentrations than in the leaves, followed by benzyl benzoate with 11.3%, which was much lower in the leaves; another of the main constituent was cinnamaldehyde acetate (8.2%). 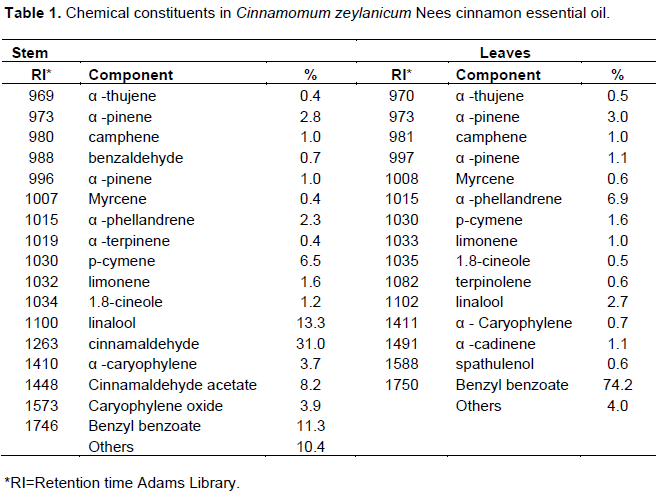 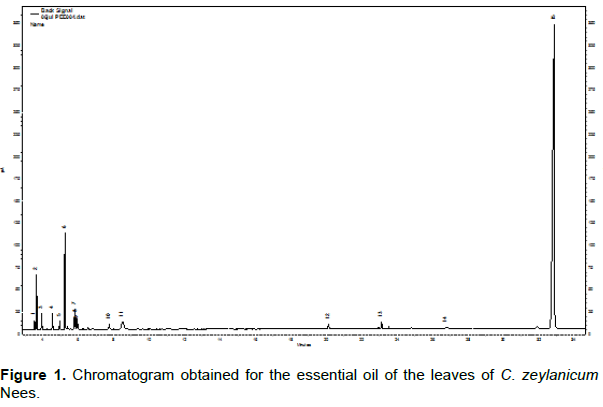 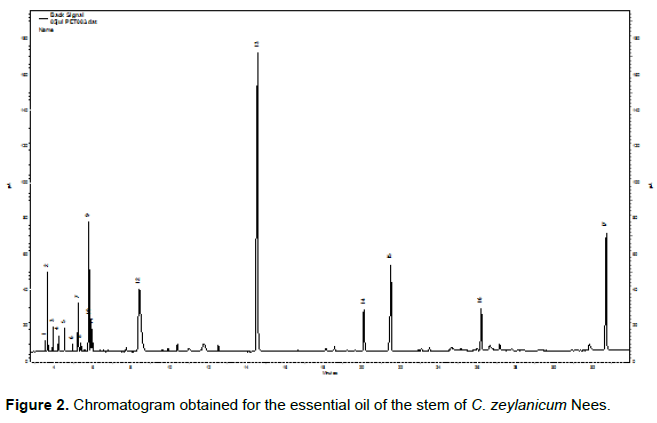 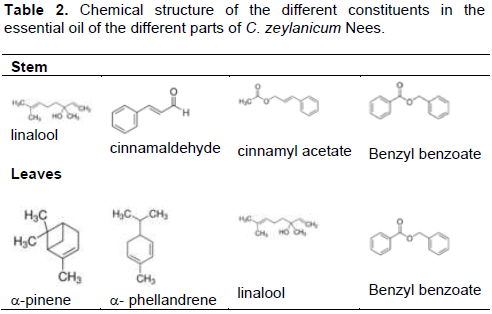 Yang et al. (2005) study the chemical composition in the cinnamon bark and obtain the majority of concentration in cinnamaldehyde with 58.1% followed by benzaldehyde with 12.58%, being higher concentrations than those found in this work for other parts of the plant. Other authors such as Monteiro et al. (2017) study the essential oil of Cinnamomum verum, where they obtain as their main constituent benzyl  benzoate  with  levels  of 65.5%; it was slightly lower than those found for the essential oil of cinnamon leaves in this work but less than the concentration of this constituent found in the cinnamon stem.

The constituent in high concentrations in the leaves of cinnamon gives the essential oil of that  part  of  the  plant an added value, since this compound is widely used in the treatment of scabies in developing countries, due to its affordability (Abdel-Reheem et al., 2016). Another of the major constituent found in the work of Monteiro et al. (2017) is linalol with concentrations of 5.4%; it is higher than   those  found  by  us  for  the  cinnamon  leaves  but lower than those of the cinnamon stem. Khosravi et al. (2018) study the chemical composition of cinnamon essential oil, where the main constituent is cinnamaldehyde with 62.06% followed by cinnamaldehyde acetate with 8.14%; this value was close to that found in essential oil of cinnamon stem.

In Table 3, the values of the percentages of inhibition of antioxidant activity for the essential oil extracted from the leaves and stem of C. zeylanicum Nees were presented, using as a reference quercetin of analytical purity. The result found for the antioxidant activity was higher in the essential   oil   concentrations  of  the  stem  than  for  the leaves, with the exception of the concentration of 8 µg mL-1, which was higher for the leaf. These values are always lower than the quercetin standard used. These values are always lower than those of the quercetin standard used. It is difficult to attribute the antioxidant effect of an essential oil to a certain constituent, since according to Wang et al. (2008), both the major and minor constituents can contribute significantly to the antioxidant activity of essential oil. Authors such as Mathew and Abraham (2006) reported the antioxidant capacity and free radical scavenging activity in extracts of C. verum leaves. This results in inhibitory  concentrations of 125 µg 3 ml-1, using the DPPH method. Castañeda et al. (2008) studied the antioxidant capacity using the DDPH method for 5% ethanolic extracts of C. zeylanicum with a percentage of inhibition of 97.59%.

The essential oil of cinnamon, extracted from the leaves and the stem, shows the amount of terpenoids and sesquiterpenoids with medicinal importance found in its chemical composition; it stands out in the benzyl benzoate for leaves, with applications in the treatment of scabies and in the stem cinnamaldehyde used as a flavor and in perfume industry. It is worth noting that the antioxidant activity of the essential oil for both cinnamon parts can assist the medical community to combat oxidative stress.