Suppression of the micellar solubility of cholesterol has suggested a potential for the treatment of hypercholesterolemia by reduction of cholesterol absorption (Kirana et al., 2005). In addition, bile acid binding capacity play important roles in regulating cholesterol levels by binding to bile acids in the intestine resulting in the formation of an insoluble complex and then excretion in the feces (Insull, 2006). Moreover, several pharmacological agents have been used for lipid-lowering management including HMG-CoA reductase inhibitors (statins), cholesterol absorption inhibitor (ezetimibe), fibric acid derivatives, bile acid sequestrants, and nicotinic acid. These drugs have different mechanisms of action of lipid lowering.

The harvest plants were divided into 3 parts for extracting in two different organic solvents (methanol and ethanol) and distilled water (H2O). For aqueous extraction, all plant materials were rinsed and 100 g of fresh plants were blended in 300 mL of distilled water and then filtered through cloth filter. The filtrate was lyophilized and the dry crude extract was stored at -20°C prior subsequent experiments. For ethanol or methanol extraction, all plant materials were rinsed and dried in the hot air oven at 50°C. 100 g of dried plant materials were ground and macerated with ethanol or methanol 300 mL for 3 days. Plants were re-extracted by the same process. The ethanol or methanol solution was subsequently filtered through filter paper. The solvents were removed using rotary evaporator. Crude ethanolic and methanolic extracts were stored at -20°C until use.

The total phenolic content of plant extracts were determined using Folin-Ciocalteu method and modified according to previous study (Abu Bakar et al., 2009). Briefly, plant extract 2 mg/mL was mixed with 2 µL of the Folin-Ciocalteu reagent (diluted reagent 1:10 with de-ionized water) and added 80 µL of (15g/L) sodium carbonate solution. After 30 min at room temperature, absorbance at 750 nm was read on a spectrophotometer. Gallic acid was used as a standard phenolic compound. The concentration of phenolics was read (mg/mL) from a standard calibration curve; then the total phenolic content in extract was expressed as mg gallic acid equivalent in 1 g of dried extract (mg GAE/ g dry weight).

To determine whether extraction solvents of dietary plants have a differential effect on pancreatic lipase activity, pancreatic lipase activity was measured using the method of Aubry et al. (2012). Varied concentration of extracts was prepared with reaction buffer pH 8.0 (0.8 M Tris-HCl, 150 mM NaCl, and 1.3 mM CaCl2). 500 µL of each extracts solution were centrifuged at 10,000 rpm for 1 min and their supernatants were collected. 25 µL of each supernatant was mixed with reaction buffer (40 µL) and 50 U/mL pancreatic lipase (25 µL) in 96 well plate (black-side and clear-bottom). Finally, the reaction was started by adding 10 µL of 400 µM substrate (1, 2 di-O-lauryl-rac-glycero-3 glutaric acid 6'-methylresorufin ester) and run at 37°C in the dark for 60 min. Amount of fluorescent methylresorufin was measured at Ex 535 nm and Em 595 nm. Orlistat was used as a positive control.

The micelle preparation was modified from Yamanashi et al. (2007). Briefly, sodium taurocholate was prepared in methanol, while cholesterol and phosphatidylcholine were dissolved in chloroform. The mixed lipid solutions were dried under N2 gas and stored at -20°C until use.

To determine the effect of extraction solvents of dietary plants on cholesterol solubility, the solubility of cholesterol was adapted from Kirana et al. (2005). Micelles solution was prepared under the conditions as mentioned earlier. The lipid film was hydrated in PBS and sonicated for 1 h before use. The final concentrations of cholesterol micelle composed of 10 mM cholesterol, 1 mM sodium taurocholate and 0.6 mM phosphatidylcholine. Plant extract (1 mg/mL) was mixed to the micelle solution for 3 h at 37°C. After incubation, mixed solutions were then filtered through a 0.22 µm membrane and determined cholesterol content by a cholesterol assay kit. Cholesterol in the filtrate can be defined as micellar cholesterol solubility.

To investigate the effect of extraction solvents of dietary plants on bile acid binding activity, the bile acid binding assay was a modification of that by Yoshie-Stark and Wäsche (2004) as previously reported by Adisakwattana et al. (2012). Three bile acids were used in this experiment including taurocholic acid, glycodeoxycholic acid, and taurodeoxycholic acid. In brief, the extracts were dissolved in water (the aqueous extract) or DMSO (the ethanolic and methanolic extract). 200 µL of each extract (1 mg/mL) was incubated with each bile acid (200 µL) at concentration 2 mM in 100 mM phosphate buffered saline (PBS), pH 7.0, at 37°C for 2 h. The mixtures were centrifuged at 10,000 rpm for 10 min and filtrated through 0.22 µm membrane filter to separate the bound from the free bile acids.

The bile acid concentration was determined using the 5th generation randox total bile acids method (Porter et al., 2003). The filtrated-free bile acid (20 µL) was mixed with reaction mixture of 170 µL containing 0.133 mol/L tris buffer (pH 9.5), 1 mol/L hydrazine hydrate, and 7.7 mmol/L NAD. Finally, the 1 unit/mL 3α-hydroxysteroid dehydrogenase (10 µL) was added and incubated at 30°C for 90 min. Two reactions were combined in this kinetic enzyme cycling method. In the first reaction, bile acids were oxidized by 3-α hydroxysteroid dehydrogenase with the subsequent reduction of Thio-NAD to Thio-NADH. In the second reaction, the oxidized bile acids were reduced by the same enzyme with the subsequent oxidation of NADH to NAD. The rate of formation of Thio-NADH was determined by measuring the absorbance at 405 nm.

The results were expressed as the mean ± SEM. The data were analyzed by one-way analysis of variance (ANOVA) followed by Scheffe’s test. P-values less than 0.05 were considered to be statistically significant. 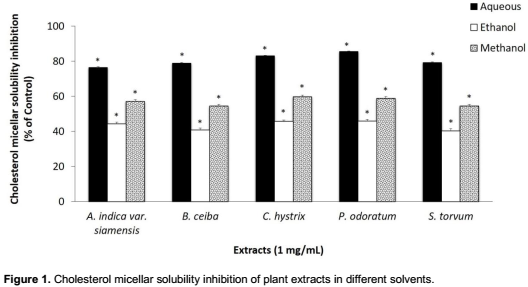 The inhibition of pancreatic lipase enzymes is expected to limit fat absorption, resulting in delayed triglyceride digestion. Pancreatic lipase plays a role in the breakdown triacylglycerol, it also plays a key role in the absorption of cholesterol. Moreover, it helps to form the lipid emulsion for cholesterol transportation (Young et al., 1999). It was revealed that transgenic mice lack pancreatic lipase enzyme response to the reduction of cholesterol absorption (Huggins et al., 2003). This observation provided that crude extracts in different solvents can inhibit pancreatic lipase activity. The ethanolic leaves of P. odoratum extracts exhibited the strongest activity. In addition, the methanolic extracts of C. hystrix and the aqueous extracts of P. odoratum were also potent to inhibit the lipase activity, respectively. The study by Han et al. (2001) and Nakai et al. (2005) found that polyphenols and saponins could inhibit pancreatic lipase activity (Han et al., 2001; Nakai et al., 2005). The study results found polyphenolic contents in all plant extracts. Aqueous and methanolic extract of A. indica var. siamensis and ethanolic extract of P. odoratum showed the highest of polyphenol in each solvents. It is possible that the inhibition of pancreatic lipase may be due to the action of their polyphenolic contents.

The inhibition of fat solubilization in the micelle (Brufau et al., 2008) and/or the changing size of the micelle affected to the absorption of cholesterol (Ikeda et al., 1992; Nagaoka et al., 1999; Raederstorff et al., 2003) in the intestinal lumen. Reduction of cholesterol absorption is also a target site for the treatment of hyperlipidemia. This result demonstrated that plant extracts in different solvents can inhibit cholesterol micelle solubility. The extracts with aqueous, ethanol and methanol at concentrations 1 mg/mL could inhibit the solubility of cholesterol micelle by 70 to 80, 40 to 60, 27 to 48%, respectively.

The binding of bile acids have been demonstrated as one possible mechanism of lowering plasma cholesterol levels. Bile acids, an acidic steroids, are synthesized from cholesterol in the liver. They are conjugated with glycine or taurine and secreted into duodenum and then reabsorbed at ileum to metabolize in the liver (Kahlon and Smith, 2007).

The study findings demonstrate that the five dietary plants extracts with different solvents extraction could inhibit pancreatic lipase activity and reduce cholesterol solubility and bind with bile acids in distinguish activities. In particular, the leaves of P. odoratum exhibit potential as the inhibitor of pancreatic lipase and cholesterol micelles solubility. The fruits of S. torvum also show high binding ability to taurodeoxycholic acid. Taken altogether, this study provides the evidence for the potential these dietary plants usage and possible development into natural supplement for lipid lowering product. However, more preclinical and perhaps the clinical studies might be needed.

This research was supported by Higher Education Research Promotion (HERP), Thailand; R020057317001. The authors gratefully acknowledge Department of Medical Science, University of Phayao and Department of Pharmacy, Naresuan University are available to do research.