Sepsis has become one of the most frequent causes of mortality in intensive care centres. So far, there is no effective pharmacotherapy that can prevent or improve the neurological consequences and enhance survival. The goal of this study is to investigate the neuroprotective effect of lemon balm (Melissa officinalis) on behavioural dysfunctions produced in sepsis-surviving rats. Adult male rats were subjected to caecal ligation and puncture and the control animals were submitted to the sham operation. Lemon balm ethanolic extract or saline, given orally, was administered for one week after surgery procedures. Locomotion, anxiety, depressive behaviour and memory were investigated. In the elevated plus-maze (EPM), the percentage of open arm entries and open arm time was very significant in the animals treated with lemon balm extract, similar to the diazepam response in sham-operated and sepsis-surviving rats. Locomotion in open field tests and the enclosed arm entries in the EPM were not significantly altered by treatments. In the forced swimming (FS) test, the extract was effective at reducing the immobility time as that demonstrated by fluoxetine. In the step-down inhibitory avoidance test, the extract eased the effects on memory of sepsis-surviving animals. Collectively, these results demonstrate that lemon balm ethanolic extract could be used for the prevention of cognitive and mood-related deficits that may be associated with sepsis sequelae.

Brain disorders are currently getting top priority among the science target and the literature has shown the behavioural problems associated with traumatic brain injury. Sepsis is an example of this damage and it is characterized by a systemic inflammatory response and is associated with high mortality in humans (Greenberg et al., 2014). The main reason of death in septic patients could be encephalopathy (Mazeraud et al., 2016; Tauber et al., 2017). Nowadays, several studies are conducted to evaluate the damage to the brain during sepsis and its behavioural consequences, especially involving cognitive and mood impairments present in sepsis survivors (Comim et al., 2016; Leite et al., 2013; Mazeraud et al., 2016; Tauber et al., 2017). The polymicrobial sepsis induced in rats by caecal ligation and perforation (CLP) experimental models are important because they reproduce human sepsis consequences (Leite et al., 2013), which is clinically relevant for elucidating new therapy alternatives for this health problem (Hutchins et al., 2014).
Traditional medicine was used on people before the great development of modern medicine, based on multiple alternatives of natural products to treat several physiological dysfunctions. Research into the historical literature has demonstrated that some of the natural products and/or their pharmacologically active principles have a broad spectrum of biological activities, including central nervous system (CNS) properties (Andrade et al., 2016; Bu et al., 2016).
Piper nigrum L. (Piperaceae) used in traditional medicine of many countries, for example, has different properties, such as antiinflammatory, antioxidant, antidepressant and cognitive effects. The methanolic extract of their fruits in beta-amyloid rat model of Alzheimer's disease significantly exhibited anxiolytic- and antidepressant-like effects and also antioxidant potential (Hritcu et al., 2015). Acute treatment of rats with Lindera obtusiloba extracts, commonly used as an alternative medicine in Korea, significantly reduced immobility time and increased swimming time, suggesting that the antidepressant-like effects of this extracts were likely mediated via the glucocorticoid receptor (Lim et al., 2016). In addition, other neuroprotective efficacy could be observed in in vivo and in vitro experiments (Jalsrai et al., 2016).
Melissa officinalis is a medicinal plant from the Lamiaceae family that has been used as a folk medicine to threat central nervous disorders (Anheyer et al., 2017; Kennedy et al., 2002). This plant has neuroprotective activity at CNS because it displays potent antioxidant activity (Soodi et al., 2017). From the phytochemical point of view, the main chemical principles of this species of herbal medicine are flavonoids, alkaloids, phenolic acids and tannins (Noguchi-Shinohara et al., 2015; Shakeri et al., 2016). These compounds may contribute to the homeostasis of the CNS, especially because they can protect against neurodegeneration and/or behavioural disorders that can be correlated to dementia or traumatic brain   injury.  Notably,   it   has   also   been  reported  as lowering excitability, cognitive dysfunctions, stress and anxiety levels in rodent models and humans (Anheyer et al., 2017; Lin et al., 2015; Ross, 2015; Shakeri et al., 2016). Previous results from our lab showed that the oral intake of lemon balm EE for about 10 days has anxiolytic and antidepressantâ€‘like properties in a manner gender (male vs. female) dependent, particularly with regard to the effective dose for each exposure length (Taiwo et al., 2012).
Despite great availability of information regarding the neuroprotective effects of plant extracts, the options for sepsis treatment is scarce. In this context, the goal of this work is to verify the possible neuroprotective action of lemon balm extract on behavioural and cognitive deficits due to sepsis sequela in rats. 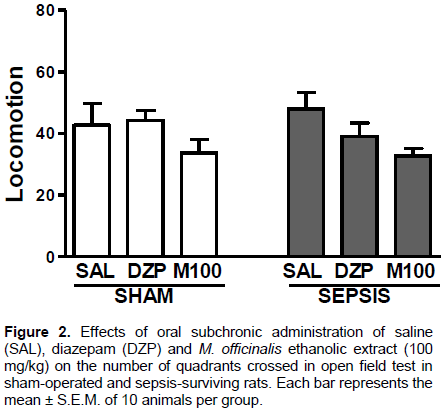 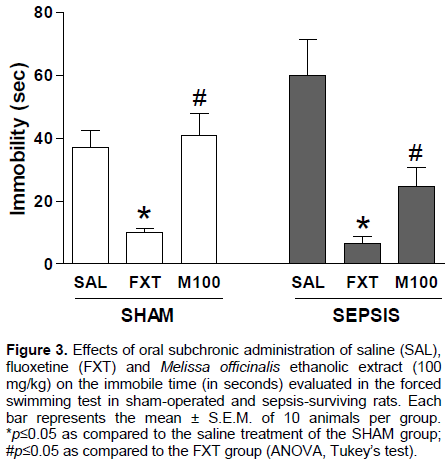 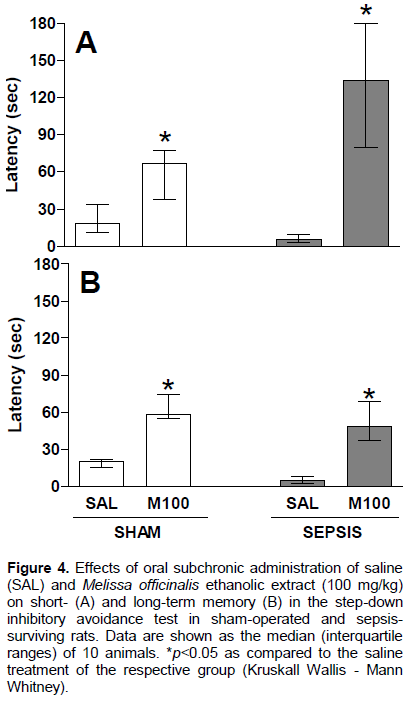 Lemon balm EE was effective in reducing anxiety, depression and cognitive impairment levels produced by sepsis in rodents, showing a property independent of any sedative effect as demonstrated by no interference in locomotion in the open field test and frequency of enclosed arm entries in the EPM, as demonstrated by Figures 1 to 4. Most of the time, the phytomedicine showed a similar effect with the positive controls DZP and FXT, suggesting that the interference in GABA and 5-HT receptors by this extract may be a new alternative for treating neurological dysfunctions produced by sepsis.
Anxiety and depression are the most prevalent mental disorders arising among child, adolescent and adult patients. Both psychiatric illnesses demonstrate marked overlap and co-occurrence (Freeman et al., 2002). Despite this, the prevalence of anxiety is 15 to 25% and the prevalence of depression appears to be higher than 50% (Brown et al., 2001; Lewinsohn et al., 1997). These two disorders may share the same or different vulnerability factors even though anxiety disorders may represent causal risk factors for the development of depression (Goes, 2015; Starr et al., 2014).
In the context of actual research, it was noted that the sepsis-surviving rats showed suggestive anxiety behaviour that was observed by reduction in the percentage of open arm entries and the time spent in those arms in the EPM, characterizing anxiogenic response. Those rats receiving lemon balm EE maintained  a  similar  response  to  the sham animals. As regards the assessment of depression, the animals showed increased immobility time in the forced swimming test, which was reduced by FXT and the lemon balm EE. These anxiolytic and antidepressant results were not due to either hypoactivity or hyperactivity displayed by animals, since their locomotion was not changed in the open field test and the entries in the enclosed arms in the EPM.
The observed anxiolytic effect of this natural product is congruent with data obtained elsewhere (Kennedy et al., 2006). The results are supported by the fact that rodents normally exhibit a preference for the enclosed arms and avoidance of the open arms of the EPM. Anxiolytic drugs, such as DZP, modulate EPM behaviour in rodents, causing an increase in the percentage of entries and time spent in the open arms of the maze. Therefore, these measures can serve as an index of anxiety (Horii and Kawaguchi, 2015).
Thus, our results are in accordance with previous data, showing anxiogenic and depressive responses in sepsis-surviving rats. Leite et al. (2013) observed that repeated nicotine administration does not alter the survival rate in rats subjected to caecal ligation and puncture and they provide new evidence that nicotine can improve long-lasting memory impairment and anxiogenic-like responses in sepsis-surviving animals. Tuon et al. (2007), in turn, demonstrated in sepsis-surviving rats, a significant increase in the immobility time as compared to the sham-operated rats. The imipramine was able to reduce this evaluated parameter, with no locomotion impairment. In the experiments, the FXT, a selective serotonin reuptake inhibitor, showed similar results.
Lemon balm is known for its mild sedative properties (Anheyer et al., 2017), even following a single administration (Soulimani et al., 1991). In our study, such behaviour was not observed. The fact that the lemon balm EE and DZP did not generally alter quadrant crossings and enclosed arm entry in the sham and EPM tests, respectively, suggests that the psychoactive effects observed in the present study may not be due to changes in the animals’ locomotor patterns.
Regarding the cognitive aspect, animals that survived the sepsis showed a loss of short- and long-term memory, which was characterized by the decrease in length of time spent in the inhibitory avoidance platform. The administration of lemon balm EE made the animals spend more time on the platform, characteristic behaviour of memory retention.
Several studies have recently shown the importance of phytotherapies for treating behavioural dysfunctions and cognitive problems in humans (Anheyer et al., 2017; Kennedy et al., 2002; Ross, 2015), even though there is little information about the possible pharmacodynamics involved in the pharmacological effects. For M. officinalis, it is well documented that its effects could be related to the active components that have been identified as monoterpenoid aldehydes, monoterpene glycosides, flavonoids and polyphenolic constituents (Shakeri et al., 2016; Wightman, 2017).
Substantial progress has been made in our understanding of how some herbal medicines can ameliorate behavioural and cognitive processes in patients with different neurological impairments. As previously mentioned, nature has sources for various types of treatment, providing effective antimicrobials to treat infections caused by bacteria, viruses and fungi, while offering therapeutic support to multiple organs and body systems. On account of this, in this present research, we also do not rule out the possibility that lemons balm EE have interfered in aspects directly related to inflammation, since it possesses potential anti-inflammatory activities, supporting the traditional application of this plant in treating various diseases associated with inflammation and pain in more peripheral areas (Bounihi et al., 2013) and brain areas, whose active principles can probably be carried through the cerebral blood flow and interact with several  neurotransmitters and signalling pathways involving kinase enzymes (Wightman, 2017).