Malaria is one of the most severe life-threatening protozoan diseases typically characterized by fever, paroxysm and flu-like symptoms recurring within 48 to 72 h cycles (Njokah et al., 2016). Plasmodium  falciparum  is by far the most virulent species of parasites that affect humans. In the 2017 World Health Organization (WHO) report on malaria, 216 million episodes of malaria and  445,000 deaths were reported,  with  90%  of  cases  and 91% of deaths affecting the WHO African region (Kweyamba et al., 2019). Eradication of malaria has become a serious challenge due to the emergence of P. falciparum species resistant to the most potent recently developed antimalarial drugs, such as artemisinin-based combinations (WHO, 2007). As a result, there are limited options for the management of patients infected with such resistant parasites, a situation that necessitates renewed efforts to identify new chemical compounds with antimalarial activity.

Physalis peruviana L. belongs to the Solanaceae family. Botanically, P. peruviana can be classified as belonging to the Plantae Kingdom, the order solanales, the family Solanaceae, subfamily of solanoideae, tribe of physaleae, subtribe of physalinae and the species of Physalis peruviana (Sharma et al., 2015). The P. peruviana grown in Kenya is thought to have probable origin from tropical South America (Maundu et al., 1999) and is well adapted to Kenyan local environmental conditions. It is commonly found growing in the wild in Kenyan forests and in infertile soils where its fruits are collected and eaten. In Kenya, P. peruviana was reported to be used in herbal medicine against asthma (Njoroge and Bussmann, 2006), while in the Kagera region northwestern Tanzania, the fruit juice of P. peruviana was used as a cure for malaria (Moshi et al., 2012).

The P. peruviana plant materials were collected in February 2013 from Nyeri County [0°25`0``South, 36°57`0``East] located in the Central part of Kenya. Nyeri is 162 Km North of Nairobi. This area is known to have good reserves of P. peruviana L. The whole plant materials were collected in 2013 and identified by National Museums of Kenya Botanists and a Voucher specimen number EAH001PK deposited at the National Museums of Kenya Herbarium, Nairobi. Various parts; fruits, leaves, stem, and roots were separated, dried under shade and pulverized in a hammer mill fitted with a sieve of 0.5mm pores.

Preparation of P. peruviana extracts was carried out using methods described by Ubulom et al. (2011). Potions of pulverized plant parts were soaked separately in distilled water, methanol and dichloromethane, for 72 h with stirring at regular intervals. The extracts were repeatedly filtered using a sterile Whatman No. 1 filter paper (Jaca and Kambizi, 2011). The aqueous filtrates were freeze-dried, while the methanol and dichloromethane extracts were concentrated under vacuum at 40°C in a Buchii rotary evaporator.

The percentage yield was determined using the method used by Ogila (2010) as follows:

Two different clones of P. falciparum were used in this study. The chloroquine-sensitive Sierra Leone 1 (D6) and chloroquine-resistant Indochina 1 (W2) strains were grown in a continuous culture supplemented with mixed gas (92% nitrogen, 5% carbon dioxide and 3% oxygen), 10% human serum and 6% hematocrit of O+ red blood cells and 5-fluorocytosine. Once cultures reached the optimum growth; growth rate ≥ 3.0% and parasitemia of > 3 % with at least an 80% ring developmental stage present, parasite solution was transferred to a 96 well microtiter plate with wells pre-coated with the test sample. The test samples were serially diluted across the plate to provide a range of concentrations used to accurately determine IC50 values. Plates were incubated in a gas chamber for 48 h after which 3H-hypoxanthine was added and parasites allowed to grow for a maximum of 18 h. Cells were processed with a 96 well plate harvester (MicroBeta) onto filter mat paper (Wallac) and washed to eliminate unincorporated isotope. Filters were measured for P. peruviana antiplasmodial activity in a micro-titer plate scintillation counter (Wallac). Data from the counter was processed using the Oracle database program to determine IC50 values.

The cellular cytotoxicity assay was used to test the cytotoxicity effects of individual extracts as was described by Wabwoba (2010) with slight modification. Briefly, Vero cells were seeded in minimum essential medium (MEM) (ATTC® 30-200TM) supplemented with 10% Fetal bovine serum, 100 IU/ml penicillin and 100 µg/ml streptomycin in 25 ml cell culture flasks and incubated for 24 h at 37°C in 5% CO2 humified atmosphere.

The Vero cells were harvested by trypsinization and pooled in 50 ml vials from which 100 µl suspensions at a concentration of 1 x 106 cells was added into 2 wells of rows A-H of a 96-well flat bottomed microtiter plate. A 100 µl of each P. peruviana extract was added and the plates incubated at 37°C in 5% CO2 atmosphere. Cells without extracts and medium alone served as the controls. A  100 µl of the cell suspension was discarded from each well followed with an addition of 10 µl of 3-(4, 5-Dimethylthiazol-2-yl)-2, 5-diphenyltetrazolium bromide (MTT) (Roche, Indianapolis USA). After 4 h of incubation, the medium together with MTT was aspirated off from the wells, 100 µl of Dimethylsulphoxide added and plates shaken for 5 min. The absorbance was measured for each well at 562 nm using a microtiter plate reader (Wang et al., 2006).

About 0.02 g of dried DPPL extract was reconstituted in dichloromethane and a drop of the extract mounted on NaCl plates for the FTIR analysis. The analysis was carried out using a Shimadzu 8400 FTIR with the scan ranging from 400 - 4000 cm-1. The scanning was made through the IR region and the P.peruviana dichloromethane leaves extract functional groups determined according to the method described by Maobe and Nyarango (2013).

Initially, 0.05 g of a homogenized DPPL extract was dissolved in 5 ml of dichloromethane in a centrifuge tube. The mixture was vortexed for 10 s and sonicated for 10 min. The mixture was centrifuged at 15000 g for 5 min. The supernatant was filtered before analysis in the GC-MS. Samples were analyzed using an Agilent 7890 Gas Chromatograph coupled to an Agilent 5975 Mass Spectrometer. The column used was the HP 5 MS capillary column: 30 m; 0.25 mm ID; 0.25 µm film thickness. The oven temperature program was initially set at 35°C and held for 3 min. It was then raised to 285°C at a rate of 10°C/ min. The oven was maintained at this temperature for 23 minutes. The total run time was 50 minutes. Mass spectrometry was done in full scan mode from 40 – 500 m/z with a solvent delay time of 3.5 minutes. Carrier gas was He (99.999%) at a flow rate of 1 ml/minute. One µL of the sample was injected using a split/splitless injector. The injector temperature was set  at  200°C  and  the  interface  temperature  was  set  at   280°C according to the method described by Wamalwa et al., (2015).

An independent t-test was performed on inhibition (IC50 in µg/ml) of P. peruviana extracts to both chloroquine-sensitive Sierra Leone 1 (D6) and chloroquine-resistant Indochina 1 (W2) strains. The level of significance was fixed at P < 0.05.

Permission to carry out the study was granted by the Kenya Medical Research Institute Ethical and Scientific Steering Committees (reference numbers KEMRI/RES/7/3/1 and ESACIPAC/SSC/101472 respectively).

Most of the P. peruviana extracts exhibited various antiplasmodial activities. According to Rasoanaivo et al. (1992), antimalarial activity of plants is described as very active: IC50 <5 µg/ml, active: IC50 greater than 5 µg/ml but less than 50 µg/ml, weakly active: IC50 value greater than 50 µg/ml but less than 100 µg/ml and inactive: IC50 > 100 µg/ml. In this analysis, APPF and MPPF were the only ones found to be inactive (Table 2). An independent t-test was performed to test the inhibition activity of the plant extracts against chloroquine-sensitive (D6) and chloroquine-resistant (W2) P. falciparum isolates. The inhibition activity of the extracts against D6 and W2 IC50 (µg/ml), t (22) = 0.016; P = 0.988, was not statistically different (P > 0.05). 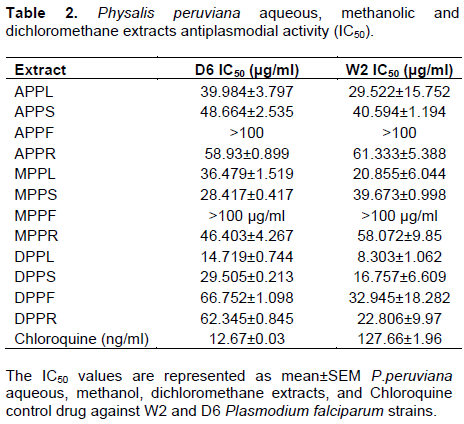 All the P. peruviana extracts were less toxic to Vero  cells (higher IC50 values) as compared to the control, 20% DMSO (Figure 1). 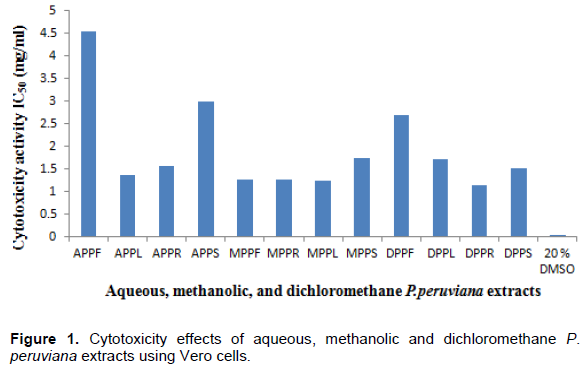 The 8 Phytochemicals in Table 3 are also presented in the form of total ion current (TIC) (Figure 3). 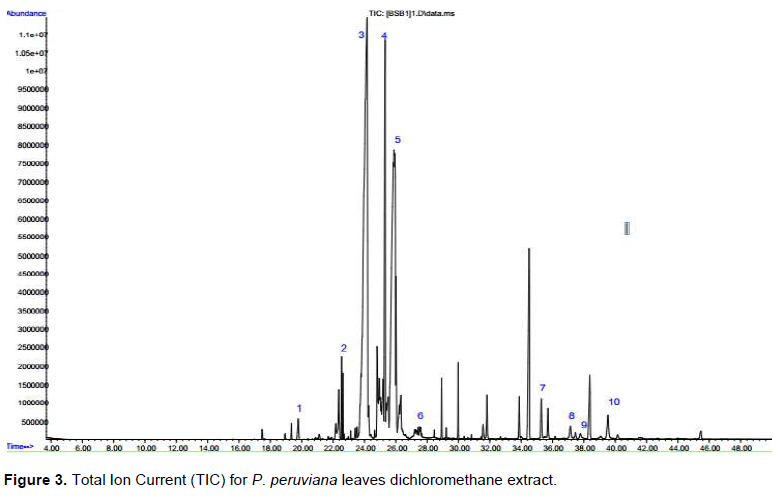 The yield of aqueous, methanol and dichloromethane P. peruviana L. extracts ranged from 0.5 - 10, 0.8 - 8.5 and 0.7 - 3.6% respectively. These results were comparable to those of other researchers who reported that the more polar solvents yielded greater quantities of extracts (Gaba et al., 2019; Abubakar, 2010).

It was necessary to determine the safety profile of plant extracts due to the complexity and natural biological variations emanating from them (Cowan, 1999). Cytotoxicity effects of P. peruviana extracts using Vero cells revealed that all extracts were less toxic compared to the control. However, according to the US National Cancer Institute (NCI), P. peruviana extracts tested were not within the toxic group of IC50 < 20 µg/ml in the preliminary assay (Nathyadevi and Sivakumar, 2015).

The FTIR is an invaluable tool  for  the  characterization and identification of phytochemicals or functional groups present in an unknown mixture of plant extract (Maobe and Nyarango, 2013). The spectrum obtained indicated the presence of O-H stretching for alcohols, Polyphenols, C-H stretch for alkanes, the carbonyl C=O stretch for carboxylic acids, and the carbonyl stretching for ketones, N-H bending and peaks at 1130.2 cm-1 and 1069.5 cm-1 attributed to C-N stretch vibrations in aliphatic amines could indicate the presence of alkaloids in the sample. The presence of these functional groups could be attributed to the medicinal properties as was revealed from a previous study (Maobe and Nyarango, 2013).

Gas chromatography-mass spectrometry revealed the presence of some compounds with biological activities such as Hexahydrofarnesyl acetone, n-Hexadecanoic acid, Phytol, Linolenic acid, Ethyl iso-allocholate, vitamin E, campesterol and stigmasterol. Linoleic acid, Phytol and Ethyl isoallocholate have been associated with antimicrobial activities (Nibret and Wink, 2010; Mohan et al., 2012; Malathi et al., 2016), which could have been attributed to the antiplasmodial activity of P.peruviana extracts. In a study carried out by Kamau et al. (2017), P. peruviana extracts were found to contain biologically active compounds such as tannins, saponins, steroids flavonoids, and alkaloids. Alkaloids have been associated with the antiplasmodial activity (Wright and Philipson, 1990).

The authors acknowledge Mr. Muturi J. Njokah of the Center for Biotechnology Research and Development (CBRD) Malaria Laboratory, Kenya Medical Research Institute (KEMRI) in Nairobi Kenya, for his technical assistance. The AFRICA-ai-JAPAN PROJECT at Jomo Kenyatta University of Agriculture and Technology for financial grant reference (JKU/ADM/10) is acknowledged with thanks.