Preliminary phytochemical screening of ethyl acetate extract of R. tuberosa reveals presence of saponin, tannins, and flavonoids (SriKumar and Pardhasaradhi, 2013). Five bioactive flavonoids cirsimaritin, cirsiliol 4′-glucoside, cirsimarin, sorbifolin, and pedalitin, with three other metabolites betulin, vanillic acid, and indole-3-carboxaldehyde were isolated and reported from ethylacetate extracts of Ruellia tuberosa. First two flavonoids showed cytotoxicity against KB cell line with the IC50 values of 30.05 and 17.91 µg/mL, and the third flavonoid was cytotoxic against HepG2 cell line with an IC50 value of 38.83 µg/mL (Lin et al., 2006). Apigeninglucuronides have also been isolated from Ruellia (Subramanian and Nair, 1972, 1974). Subramanian and Nair reported that R. tuberosa leaves have only traces of apigenin and luteolin, but its flowers contain malvidin-3,5-diglucoside in appreciable amount (Subramanian and Nair, 1974).

Previously we examined and reported volatile chemical compositions on three Acanthaceae: Brillantaisia patula (leaf and stem), Hypoestes phyllostachya (leaf and stem), Asystasia gangetica (aerial, seed and root) (Moronkola et al., 2009a, 2009b, 2011). This study examines the composition of volatile content of leaf, stem, root, fruit, and flower of R. tuberose L. also an Acanthaceae, from Nigeria, which have not been earlier reported in literature.

Fresh samples of R. tuberosa were collected from Ibadan, Oyo State, Nigeria, on 15thOctober 2014. The plant was authenticated in the herbarium, Department of Botany, University of Ibadan, Ibadan, where some voucher samples have been deposited, with voucher number UIH - 22426. Collection of the sample was done during the day time. The plant was separated into leaf, stem, root, fruit, and flower parts.

Extraction of the essential oils

Each separated parts (leaf, stem, root, fruit, and flower) of R. tuberosa was crushed and hydro-distilled for 3 to 3½ h in an all glass Clevenger-type apparatus designed to British Pharmacopeia specifications and the oils refrigerated until analyses. Essential oils from the pulverized air-dried plant materials were procured in 0.09 to 0.36% yields (Table 1). Each of the oils had distinct characteristic pleasant smell.

Composition of the essential oils was determined by gas chromatography-mass spectrometry (GC-MS) using an Agilent 7890N gas chromatography hyphenated with an Agilent system mass detector Triple Quad 7000A in EI mode at 70 eV (m/z range 40 - 600 amu) with an ion source temperature of 250°C and an Agilent ChemStation data system. GC column was equipped with an HP-5MS column (30 m × 250 µm × 0.25 µm) a split-split less injector heated at 200°C and a flame ionization detector (FID) at 230°C. Oven temperature was programmed as follows: Initial temperature 40°C for 5 min, increased 5°C/min to 180°C for 6 min and then 10°C/min to 280°C for 12 min. Helium was the carrier gas at flow rate of 1 mL/min. Injection volume was 2.0 µL (split ratio 1:20).

The components were identified by comparison of their mass spectra with NIST 1998 library data of the GC-MS system as well as by comparison of their retention indices (RI) with the relevant literature data (Adams, 2007). The relative amount of each individual component of the essential oil was expressed as the percentage of the peak area relative to the total peak area. RI value of each component was determined relative to the retention times of a homologous n-alkane series with linear interpolation on the HP-5MS column.

Results of the yields (0.09 to 0.36%) of extracted essential oils from five parts of R. tuberosa L. (leaf, stem, root, fruit, and flower), with their physical examinations are presented in Table 1. GC and GC-MS analysis of the oils afforded the identification of 24 compounds in leaf, 15 in stem, 42 in root, 60 in fruit and 6 in flower. Results of the 109 identified compounds are presented in Table 2. Table 3 has results of the comparison of the eleven classes of compounds found in the five R. tuberosa essential oils studied. 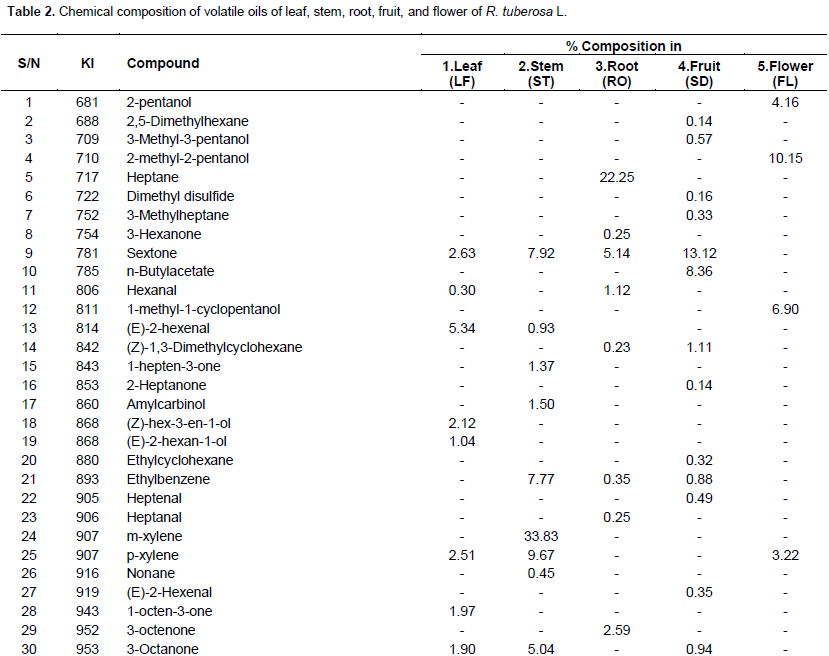 Volatile oils from five parts of R. tuberosa L. (leaf, stem, root, fruit, and flower) were obtained by hydro-distillation. Oils were procured in 0.09 to 0.36% yields, each having characteristic distinctive notes: Leaf oil (0.31% yield) had a pleasant herbal to leafy note; stem oil (0.36%) possessed slightly choking but pleasant smell; root oil (0.09%) had woody odour; fruit (0.14 %) with fruity note, while the flower oil (0.25%) had a floral note (Table 1).

Our study on the five volatile oils of R. tuberosa L. from Nigeria resulted in the identification of a total of 109 compounds. Monoterpenoids are more abundant than sesquiterpenoids, with the oils rich in esters, alcohols, aromatics and carbonyls. The oils are good sources of sextone, β-linalool and alcohols. We have presented the volatile constituents in R. tuberosa (leaf, stem, root, fruit, and  flower)  which  have  not  been  earlier   reported   in literature

The authors acknowledge the use of J-laboratory facilities, University of Ibadan, Nigeria in essential oils’ isolations, and TWAS-UNESCO Associateship Scheme (3240278157) awarded to Dr. Aboaba that afforded the GC-MS analyses in H. E. J Research Institute of Chemistry, International Centre for Chemical and Biological Sciences, University of Karachi, Pakistan.