In this study, the chemical composition of the peel and pulp of Mauritia flexuosa fruits were analyzed and the antimicrobial activity of ethanolic extracts from these fruits was evaluated using in vitro tests. Chemical composition analysis with gas chromatography-mass spectrometry (GC-MS) indicated the presence of saturated and unsaturated fatty acids. The peel extracts (ECBU) presented 54.41% and the pulp (EPBU) presented 94.05% of the saturated fatty acids lauric, myristic, palmitic, stearic, oleic and linoleic acids. The antimicrobial activities were performed using the diffusion and micro-dilution (MIC) methods. ECBU was active against the bacteria Enterococcus faecalis, Escherichia coli, Pseudomonas aeruginosa and Staphylococcus aureus at a concentration of 200 mg mL-1, but it was not active against the yeasts Candida albicans and Candida parapsilosis using the diffusion method. The MIC results showed that ECBU was active against the tested bacteria at concentrations > 12.5 mg mL-1 and EPBU was active at concentrations > 25.0 mg mL-1. This was probably due to higher sensibility of the method. The results indicated that the peel and pulp extracts of M. flexuosa present antibacterial activity and that ECBU is an especially promising potential candidate for the prospection of new pharmaceutical compounds.

The vast availability and indiscriminate use of antimicrobial compounds has led to a selection  of  micro-organisms that are resistant to these drugs. These drugs exert influence both in  the  patient  under  treatment  and  the ecosystem, with significant repercussions in the result of the disease and also in the increase in resistant environmental bacterial strains and species (Avorn and Solomon, 2000). In order to supply an increasing demand for new antimicrobial drugs, research on new sources of substances, including plants, has grown (Caetano et al., 2002). Bioactive compounds from plants have presented high specificity against a broad spectrum of bacteria (Dixon, 2001). The Cerrado and Amazonian biomes present 20% of all the biodiversity in the world (Calixto, 2005), which includes great diversity of plants with well-known therapeutic properties and chemicals that can be used in biological studies. Mauritia flexuosa L.f. (buriti) belongs to the Arecaceae family and is considered one of the most abundant oleaginous palms in Brazil, where it is native. The fruits of buriti are spherical or oval with seasonal fruiting (Storti, 1993), are rich in vitamin A and carotenoids which gives them their characteristic yellowish/reddish color (Albuquerque et al., 2003) and are traditionally consumed in natura (Barbosa et al., 2010). The commercialization of products from this palm tree in regions where it is native provides income for the local population and helps maintain the integrity of the “veredas” ecosystem, its main habitat. The indigenous Brazilian people call this species "the tree of life", due to the use of most of its parts, from the leaves to the root. Ribeiro et al. (2014) found 40 different uses for buriti among traditional native communities in Northwest Brazil. The studies of bioactive compounds with antimicrobial activities from buriti fruits are very rare. Buriti oil is reported as presenting antimicrobial properties as a soap formula (Soares et al., 2017). Koolen et al. (2013) and Batista et al. (2012) showed antimicrobial activity of extracts of leaves, trunk and fruits of M. flexuosa. Melhorança Filho and Pereira (2012) report antimicrobial activity against Staphylococcus aureus by seeds of two other Amazonian palms, Eutherpe oleracea and Bactris gassipaes. Barros et al. (2014) showed that buriti cream was effective in healing of skin lesions in mice. Due to the economic importance of M. flexuosa for indigenous Brazilian people, the objective of this study was to carry out in vitro antimicrobial activity tests of the ethanol extracts from the pulp and the fruit peel against human pathogens and to analyze the chemical composition of the fatty acids presented in gas chromatography coupled to a mass spectrometer. There are few studies on the antimicrobial activities of the chemical components (GC-MS) of the peel and pulp of this palm tree’s fruits.

Chemicals
Ethanol, Aluminum chloride (AlCl3), Sodium chloride (NaCl), and Dimethyl sulfoxide (DMSO) were purchased from Sigma-Aldrich (St. Louis, MO, USA). Mueller Hinton Broth and Sabour aud culture media were obtained from Kasvi (Curitiba, Paraná, Brazil). The water used in  all  analyses  was  ultrapure  produced  by  a  Milli-Q,  Millipore system (Bedford, USA). Other reagents used in this study were of analytical grade.
Plant materials
Ripe fruits were collected from M. flexuosa (Figure 1a and b) in October 2015, in “vereda” (“veredas” are well-defined ecosystems that occur within the Brazilian Cerrado biome, and are characterized by the presence of buriti palm trees in semi-waterlogged conditions) site in the State of Tocantins, Brazil (9°58’2.078934”S 48°17’28.64502”W), at an altitude of 488 m. A voucher specimen of M. flexuosa (10.952) was deposited at the HTO herbarium of Universidade Federal do Tocantins (Federal University of Tocantins - UFT). 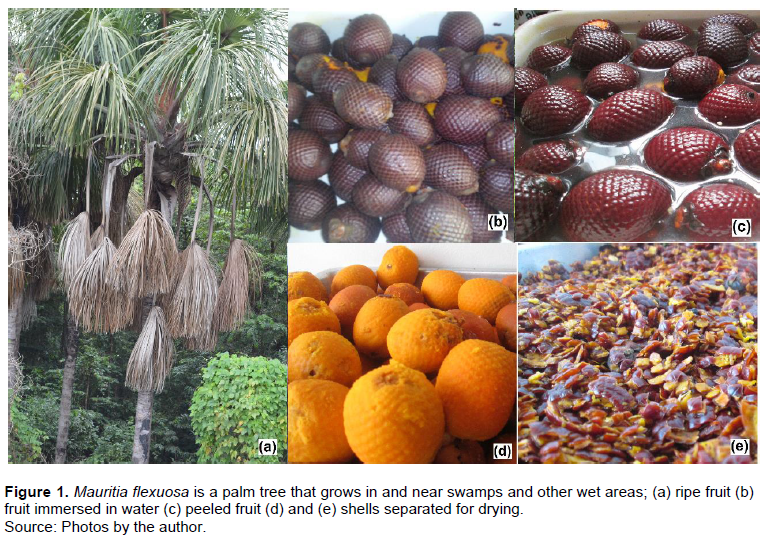 Sample preparation
The M. flexuosa fruit peels were removed manually after immersing the fruit in warm distilled water (40ºC), and were separated from the pulp using a stainless steel knife (Figure 1c to e). Thereafter, the materials were dried in an oven with air circulation (Fanem, São Paulo, Brazil) at 40°C for 48 h and crushed in a home processor (Arno, São Paulo, Brazil). Samples of approximately 10 to 30 g were weighed on a precision analytical scale (Shimadzu do Brazil, São Paulo, Brazil) and placed in cellulose cartridges in a Soxhlet apparatus with 200 mL of ethanol solvent (Vetec, 99.8% P.A.) for extraction over five h. In the end of the process, the solvent was removed using a rotary evaporator (Cienlab, São Paulo, Brazil) with a reduced pressure of 45°C. The crude extracts from buriti’s pulp (EPBU) and peel (ECBU) were stored in a sterile bottle and refrigerated (10 to 15°C).
Gas chromatography–mass spectrometry (GC-MS)
In order to analyze the chemical compounds presented in the plant extracts, they were derivatized (esterification reaction) by acid catalysis of boron trifluoride in methanol with heating (Meher et al., 2006). Analyses were carried out using a Shimadzu GC/MS QP Model 2010 Ultra chromatograph equipped with an HP-5MS (30 m × 0.25 mm × 0.25 µm) fused silica capillary column. Standards for the GC–MS were saturated alkanes (C11 - C40) The program temperature for the standards used was 50°C (0 min); 5°C min-1 reaching 310°C (20 min), in which the retention time of C11H24 is 10.020 min and that of C13H28 is 15.535 min in Split mode: 1:25. The heating ramp had been programmed for a temperature range of 50°C (0 min); 5ºC min-1 up to 300°C (10 min) at a speed of 3°C min-1. Injection temperature: 300°C; Interface temperature: 250ºC in Split mode: 1:25. Helium gas was used as a carrier gas at a speed of 1.2 mL min-1. The energy of the electron was 70 eV and the temperature of the ion source was 250°C. The compounds were identified by comparing the mass spectrometer and their GC retention data with standards. Further identifications were made by comparing the mass spectrometer with those of the NIST-08 (National Institute of Standards and Technology) libraries and those cited in the literature (Adams, 2017).
Antimicrobial assays
ATCC-type strains (American Type Collection Culture) were kindly provided by collection from the National Institute for Quality Control in Health at the Oswaldo Cruz Foundation (INCQS/FIOCRUZ – Rio de Janeiro, Brazil). The used bacteria used were: Enterococcus faecalis (ATCC 4083), Escherichia coli (ATCC 25922), S. aureus (ATCC 6538) and Pseudomonas aeruginosa (ATCC 27853) and the yeasts used were: Candida albicans (ATCC 10231) and Candida parapsilosis (ATCC 22019), microorganisms that are usually recommended for use in antimicrobial assays (Alves et al., 2008; Silva et al., 2012).
Antimicrobial sensitivity testing
The antimicrobial assays were performed in triplicate using the well diffusion method (CLSI, 2012) in Petri (140 × 15 mm) dishes with 50 mL of Muller Hinton Agar medium for bacteria and the same amount of Saboraud Agar medium for the yeast tests. Inoculum solutions were prepared using 3 to 4 colonies of the isolated strain in plates and diluted in 0.85% saline solution before reaching the corresponding turbidity of 0.5 on the McFarland scale (CLSI, 2003); that is, around 1.5 × 108 Colony Forming Units (CFU.mL-1) of bacteria and 2.0 × 106 CFU mL-1 (Pelissari et al., 2010) of yeasts. A 10% solution of Dimethyl sulfoxide (DMSO) was used as the negative control, and 30 µg mL-1 of Fluconazole for the yeasts or 30 µg mL-1 of Chloramphenicol for the bacteria was used as the positive control. The solutions containing the inocula were swabbed on the surface of the media and the wells were made with a sterile cork borer. The wells were then filled with 50 µL of the tested extract diluted in 10% DMSO at concentrations of 200, 100 and 50 mg mL-1, and with the positive and negative controls. After 24 h of incubation at 37°C (bacteria) and 25°C (yeasts), the microbial growth inhibition halos were measured in millimeters with a digital caliper.
Determination of the minimum inhibitory concentration (MIC): Determination  of  the  minimum  inhibitory concentration (MIC) was done using the broth microdilution technique as recommended by the Clinical and Laboratory Standards Institute (CLSI) (Lima et al., 2006). The tests were performed in a “sensitive microtiter” plate with 96 sterile wells only for microorganisms that presented inhibition in the well test (E. faecalis, E. coli, S. aureus and P. aeruginosa). Initially, 100 µL of Muller Hinton growth medium was added to each well, followed by the extracts that were added by performing serial dilution as recommended by Benfatti et al. (2010), thus obtaining a range of concentrations of the pulp or peel extracts (50, 25, 12.5, 6.25, 3.125, 1.56, 0.78 and 0.39 mg.mL-1). A solution of 2000 µg mL-1 of Chloramphenicol was used as the positive control, leading to serially diluted concentrations of 1000, 500, 250, 125, 62.5, 31.25, 15.625 and 7.8 µg mL-1. The negative control was 10% DMSO. Bacteria viability was tested using serial dilutions from a starting solution of 107 CFU mL-1. In addition, control of media sterility was also executed. The 5 µL inoculum of the 107 CFU mL-1 bacterial solution was added to all except the sterility control wells. The plates were covered with plastic film and incubated at 37°C for 24 h. After the incubation period, 30 μL of a 1% aqueous reazurine (7-hydroxy-10-oxidophenoxazin-10-ium-3-one) solution was added to each well for 1 h. A resulting blue color in the well was read as growth inhibition and a reddish pink as non-inhibition.

Antimicrobial activity of crude extracts
The antimicrobial activity test was performed with the crude ethanolic extracts ECBU and EPBU from M. flexuosa (Table 2) in which EPBU showed no inhibition halo against the bacteria tested. The extract ECBU presented an inhibition halo ranging from 0 to 15.5 mm for all bacteria at a concentration of 200 mg/mL. The largest inhibition halo occurred against S. aureus and the smallest against P. aeruginosa. At a concentration of 100 mg/mL, all bacteria were inhibited except P. aeruginosa. The extract was able to inhibit E. faecalis and S. aureus at concentrations as low as 50 mg/mL, but was not able to inhibit the other tested strains.

Buriti (M. flexuosa) fruits and their products present great economic and social importance in the geographic areas where this plant is autochthonous. The obtained ethanolic extracts from the pulp and peel of these fruits showed antibacterial activity against the human pathogens studied. The gas chromatographic analysis (GC-MS) identified the fatty acids: lauric, myristic, palmitic, stearic, oleic and linoleic. Therefore, this study concludes that ECBU and EPBU present potential for pharmaceutical and technological applications due to the presence of bioactive compounds with antibacterial activity and has brought forward new information on the biotechnological potential of this Brazilian palm tree.