In the present study three species of mushrooms, Auricularia auricula (AAP), Lentinus edodes (LDP, Shiitake mushroom) and Poria cocos (PCP) were isolated water soluble polysaccharides, and their antioxidant properties and chemical characteristics were evaluated. Fourier Transform-infrared analysis demonstrated that three polysaccharides were composed of β-glycoside linkages 3304 to 1000 cm-1, and continued until 658 to 1000 cm-1. FTIR analyses recommend that there were no significant differences between chemical compositions of polysaccharides. The main monosaccharide compositions were D-galactose, D-glucose, L-rhamnose, arabinose, and D-mannose for A. auricular (AAP) and L. edodes (LDP) while P. cocos (PCP) were found to consist of D-mannose and D-galactose. Though, the antioxidant activity of A. auricular (AAP) confirmed a significant result in scavenging free radicals than P. cocos (PCP).

The edible mushrooms are important components of the human diet for thousands of years. The mushrooms are recognized as functional foods contain antioxidants and polysaccharides found to be useful in treating cancer and other overwhelming diseases (Chang and Wasser, 2012). These edible mushrooms possess antioxidant activity and protect from different types of diseases (Kim et al., 2008). It is also demonstrated that polysaccharides play a vital role as a dietary free radical scavenger in the anticipation of oxidative damage in living organisms (De Silva et al., 2013). The Lentinula edodes is the second worldwide cultivated mushroom after the button mushroom (Sánchez, 2010). It is a good source of many bioactive polysaccharides; Lentinan has been shown to extend the overall survival of cancer patients, particularly those with gastric and colorectal carcinomas (Singdevsachan et al., 2016). Different studies have been carried out on fresh and dried A. auricula-judae established that they have good bioactivity. Besides this, it has been confirmed that polysaccharides commonly have antioxidant action and can be used as potential antioxidants (Hu et al., 2003; Li et al., 2007; Tam, 2008). From this research, it has been found that 100 g of dried A. auricula contained 50 g dietary fiber, 18.9 g carbohydrates, and 18.3 g protein. Besides this, A. auricula has medicinal value in the prevention of heart attacks and diabetes (Khan et al., 2009; Kim et al., 2007; Wang et al., 2012). It has also been shown that A. auricula has beneficial health effects for both human beings and animals. They also have pharmaceutical effects such as inhibiting lipid peroxidation and decrease in liver damages, chelating metal ions in vitro and scavenging radicals. P. cocos is also a well-known food or food supplement in oriental countries (e.g. China, Korea, Japan, etc.), which is widely used to make soups, porridge, cake, tea, alcoholic beverage, etc. (Chen and Chang, 2004; Lu et al., 2010). The P. cocos used as a traditional herbal medicine for several centuries (Chen, and Chang, 2004) in oriental countries such as China, Japan, and Korea (Toshiyuki et al., 2007) because of its various bioactivities, such as sedative and diuretic effects (Zhang et al., 2005). The objective of the current study was to estimate and contrast the chemical characteristics and antioxidant properties of crude water-soluble polysaccharides from three species of common edible mushrooms: A. auricular (AAP), L. edodes (LDP, Shiitake mushroom) and P. cocos (PCP).

Three different mushrooms, A. auricular, P. Cocus and L. edodes were collected from Wuhan city, Hubei province, China during the month of March 2016. Work was carried out in the College of Food Science & Technology, Huazhong Agricultural University, Wuhan. Standard monosaccharides, including D-galactose, D-glucose, D-ribose, l-arabinose, F-fructose, D-mannose, l-rhamnose, and xylose were purchased from Sigma Chemical Co. (St. Louis, MO, USA). Potassium meta bisulfates (KMS) and all other chemicals used were of analytical grade and were purchased from Sinopharm Chemical Reagent Co., Ltd (Shanghai, China).
Isolation of polysaccharides
Three edible mushrooms were dried at 70°C in the oven and grind to obtained a fine powder (50 mesh), then weighed (50 g each) and extracted the polysaccharides by using the hot water extraction method described by Sun et al., (2005) with some modifications, at 80°C for 2 h. The suspension was centrifuged (3000-rpm for 15 min), (Beckman Coulter Model J-E, JSE 05K01 Centrifuge, USA) according to the method conducted by (Li et al., 2008) extracted twice using the same method. The rotary evaporator Model RE-2000A (Yarong Bio-instrument Shanghai, China) was used to concentrate the combined liquid extracts at 40°C. The precipitate was dissolved in 300 mL of water, and deproteinized with 20 mL chloroform, followed by 4 mL n-butanol by using Sevag method, described by (Liu et al., 2008). Following the Sevag reagent, precipitates were washed three times with anhydrous ethanol, acetone, and ether, and the mixture was stirred at ambient temperature for 20 min and then left at 4°C overnight. The precipitate was collected by centrifugation (8,000 × g for 15 min), consequently washed with anhydrous ethanol, acetone, and ether, respectively, and dialyzed in dialysis bag was continued for three successive days against distilled (molecular weight cut-off, 1.2 × 104 kDa). The reserved fraction was recovered, concentrated under vacuum and lyophilized to obtain three crude water soluble polysaccharides, which were termed as AAP, LDP, and PCP for A. auricula, L. edodes (Shiitake mushroom), and P. cocos, respectively.
Proximate composition
The proximate analysis was conducted according to Association of Official Analytical Chemists (AOAC, 2005). Fat content was determined by the Soxhlet method with extraction through petroleum ether, Ash content was determined by dry ash at 550°C. Moisture content of samples was analyzed by an oven-drying method at 105°C, pH values were determined using a digital pH meter (Seven Easy Switzerland, Model 8603). The total amount of phenols content in the mushrooms extracts were determined according to the method described by (Cheung et al., 2003). The protein content was calculated by comparisons with a bovine serum albumin (BSA) standard curve and is expressed as g/mL equivalent. Total carbohydrate content was determined by (Cheung et al., 2003) using D-glucose as the standard.
Monosaccharide compositions
AAP, LDP, and PCP (10 mg) were hydrolysed with 2.0 M TFA (5 mL) at 100°C for 4 h in a sealed plastic tube (Yang et al., 2009). The hydrolysate was evaporated to dryness using 2 mL of methanol 3 to 5 times under reduced pressure at 40°C in a rotary evaporator. Hydroxylamine hydrochloride 10.0 mg, half a milliliter of pyridine and 2.0 mg inositol hexa acetate (as internal reference) were insert to mixture stand to react in a water bath (model KD-98-IIA Tianjin Taisite Instrument Co., Ltd) at 90°C for 30 min, then the tubes were cooled to room temperature. Following cooling, acetic anhydride 1 mL was added and mixed, the reaction was continued at 90°C for 30 min. Subsequent to incubation, the tubes were cooled and 10 mL of chloroform was added to the solution. The lower layer (organic layer) was collected and evaporated to dryness under reduced pressure at 40°C using a rotary evaporator; 500 µL of chloroform was then dissolved for use. 1 to 3 µL of the chloroform solution was injected into the GC. Standards of monosaccharide include 10 mg each of Man, Rha, Rib, Gala, Xyl, Ara, Fuc, and Glu that were prepared and treated in the same way. The process was performed under the following conditions: Detector temperature: 250°C, injection temperature: 270°C, programmed column temperature: 150°C in the beginning, maintained for 5 min, then increased to 190°C at 10°C/min, and finally held at 210°C for 5 min at 2°C/min and fitted with an HP-5 Silica capillary column (30 m × 0.32 × 0.5 µm). High-purity helium was used as the carrier gas and was maintained at 1.2 mL/min.

The purified AAP, LDP, and PCP samples (0.5 to 1 mg) were dried in the vacuum oven previous to making pellets with KBr powder. The sample and KBr crush collectively in the mortar until carefully mixed and compressed. Spectroscopy was recorded on a Spectrum one FTIR spectrometer (Thermo Electron Corporation, USA) with a range from 500 to 4000 cm-1.
Determination of total antioxidant activity
The antioxidant capacity of the mushrooms extracts was determined by the method of (Prieto et al., 1999). A mixture sample of known concentration (400mL, 250mg/mL in methanol) was mixed with 4.0 mL of reagent mixture sulfuric acid (0.6 mol/L), sodium phosphate (28 mM/L) and ammonium molybdate (4 mM/L). The mixture was heated at 95°C for 90 min and absorbance measured at 695nm. The spectrophotometer was calibrated against a blank containing 4.0mL of reagent solution and 0.4mL of methanol. The total antioxidant capacity is presented as mg ascorbic acid/g of the sample using ascorbic acid as standard.

FTIR spectra of the purified fraction 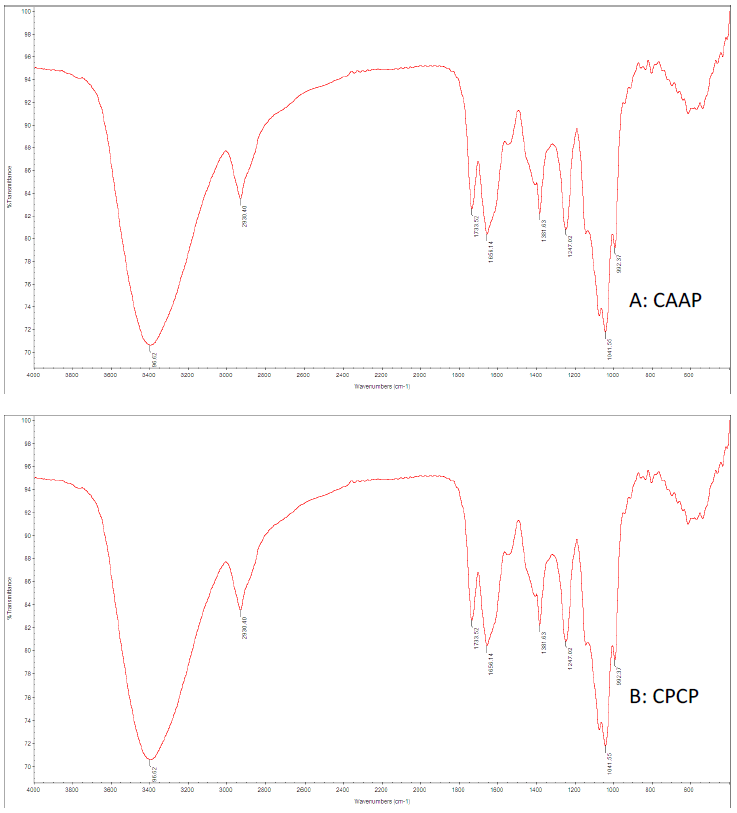 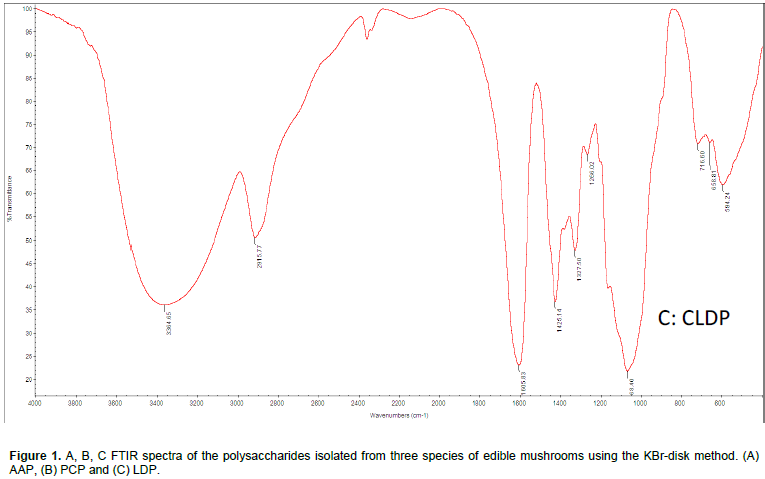 Antioxidant activity
Effect of scavenging on DPPH radicals
Free radical scavenging commonly used to estimate antioxidant activity. The radical scavenging activity (RSA) DPPH of the mushroom extracts was analyzed. Polysaccharides isolated from three species of edible mushrooms were used to evaluate Scavenging as shown in Figure 2. The DPPH of different mushroom PCP, AAP, and LDP extracts varied from 3.44 to 8.50 and 5.64, respectively, whereas, a significant increase in antioxidant capacity was found with an increase in concentration. At 1.0 mg/mL, the scavenging abilities of PCP, AAP, and LDP were 0.235, 4.50, and 2.04%, respectively. It is obvious commencing the results that the antioxidant compounds present dependent on the antioxidant capacity (Abid et al., 2013). The polysaccharides antioxidant activities are associated to monosaccharide constituent, structure and conformation (Sun et al., 2005; Tsiapali et al., 2001) reported that the antioxidant abilities were partially related to monosaccharide composition. 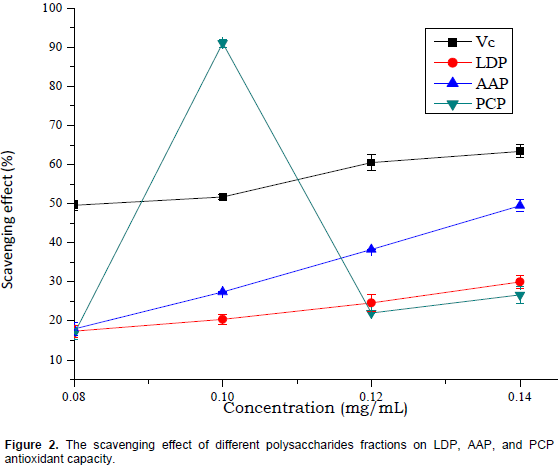 The mushrooms used as a food substance for long time due to their exceptional and subtle flavour. In this study, three crude water-soluble polysaccharides were isolated from three species of familiar edible mushrooms. Monosaccharide composition of the three polysaccharides, were determined, FTIR analysis showed that the three crude polysaccharides were all composed of β-glycoside linkages. Major monosaccharides in AAP, were arabinose, xylose, mannose, and galactose. The monosaccharides in LDP were largely composed of D-glucose (51.30%), and D-mannose (12.34%). Whereas the variability in the mushroom varieties with different processing techniques for making the various products should be taken into account in estimating proximate and antioxidant components in future research.

The authors are grateful for the Special Fund for Agro-scientific Research in the Public Interest (201303080).