Fresh leaves of twelve accessions of Sesamum indicum were collected after 12 weeks of planting and morphological-histology of trichomes were studied. These features may be used for the delimitation and determination of pharmaceutical potentials of the accessions. These accessions were found to exhibit high degree of heterogeneity in their trichome features. Nine types of trichomes were observed: unicellular, glandular peltate, capitate glandular, long unbranched uniseriate, short unbranched uniseriate, scale, multicellular, multiseriate capitate glandular and branched uniseriate trichomes. Lale-duk recorded the highest number (six types), four in accessions Ex-Sudan, Adaw-ting (Improved) and Ex-Gombe 1, three in accessions Ex-Gombe 3, Ex-Gombe 4, Ex-Gombe 5 and Ex-Gombe 6, two in kenana 4, Adaw-wula and Adaw-ting. The most frequent trichome type is short-unbranched uniseriate (76.52%), followed by long-unbranched uniseriate (72.73% and scale (65.11%). The least frequent was multiseriate capitate glandular (11.5%). The density of trichomes varied from accession to accession. Trichome density was the highest in Ex-Gombe 3 (63.2±0.49 mm2) and the lowest was recorded by Ex-Gombe 4 (4.40±0.29 mm2). The high variation in density coupled with the presence of glandular trichomes suggest that all the parts of these accessions probably contain or secrete chemicals that have many uses in the pesticide, pharmaceutical and flavour/fragrance industries and to conserve water. Furthermore, the trichome features varied from accession to accession; hence, are found to be good diagnostic and additional tool in identification as well as nomenclature of the accessions of S. indicum.

Sesame (Sesamum indicum L. - Pedaliaceae) is native to Africa and India. The local names of the plants depend on the source areas of cultivations in the world, such as Yanmoti (Yoruba), ri?i (Hausa) and beni (Tiv/Idoma and English) or gingelly (English) (Gill, 1992; Shittu, 2010) among others. It is widely naturalized in tropical regions of the world (Anilakumar et al., 2010). Sesame is an annual plant growing up to 100 cm tall. It has opposite leaves, broad lanceolate. Flowers are large, bell-shaped. They appear from the leaf axils on the lower stem, and gradually appear as the stem grows. Flowers vary in color. In some varieties they are yellow, in others purple or white. The plant is cultivated mainly for its seeds, small and flat ovals with mild, nutlike flavour.

Kanu (2011) reported that useful seed components of sesame include iron, magnesium, manganese, copper, calcium, vitamin B1, vitamin E, phytic acid, phytosterols and sesamin. Sesame seeds have been considered to be antioxidant, anticancer, demulcent, emollient and laxative properties. Due to its lignans content, sesame is very efficient in lowering cholesterol levels. One of its lignan components, sesamin, is proven to protect the liver from oxidative damage. As an excellent source of phytosterols, sesame seeds are efficient immune enhancer. It is also believed that they can help as prevention against certain forms of cancers (Farri, 2012). The result of paucity of knowledge and folkloric claim on the sesamum leaves effectiveness in treating infertility and infections was reported. In addition, sesame leaves extract consumption enhances the quality of the spermatozoa produced with improvement in the storage capacity of the epididymes for these spermatozoa in a dose related manner (Web 1, 2104).

Moreover, the methanolic leaf extracts showed antibacterial effect against Staphylococcus aureus at a higher concentration and was very effective against Streptococcus pneumoniae and Candida albicans; hence, possess both antibacterial and antifungal activity (R´?os and Recio., 2005). This same natural antibacterial effect against common skin pathogens such as Staphylococcus and Streptococcus bacteria as well as common skin fungi including the athlete's foot fungus was reported in other similar study using the sesame oil (Sesame, 2000). Ogunsola and Fasola (2014) reported that the leaf ethanolic extracts of S. indicum had a very strong antimicrobial effect on E. coli and mildly effective against Klebsiella pneumonia and Salmonella typhi at 400 mg/ml.

Most plants have hairs on their aerial surfaces, called trichomes, superficially similar to the hairs on the human body (Peter and Shanower, 1998). These plant hairs, or trichomes, affect the plant in a number of ways. There are two major types of trichomes, glandular and non-glandular trichomes. Glandular trichomes contain or secrete chemicals that have many uses in the pesticide, pharmaceutical and flavour/fragrance industries. Daniel (2005) added that leaf cuticular study is becoming more important because taxonomists, drug industries, animal nutritionists, animal toxicologists and police department have found it useful in plant identification. Thus, there is today an increasing interest in understanding the morphology and chemistry of glandular trichome and its exudates and taking advantage of their potential uses. The ethno-botanical and medicinal uses of this commercially important, nutritionally rich oilseed need to be explored for better utilization.

Sesame is an age old important oilseed crop particularly from the oil and seed perspective. However, potential importance of its leaves is not much known. The aim of the study therefore is to evaluate the diagnostic features of S. indicum using leaf trichomes and to ascertain the pharmaceutical potentials of the accessions. The distinguishing trichome types of some accessions under study, in the long run, will be helpful as morphological-histological markers in systematics and pharmaceutical diagnostics.

Epidermal peels of the leaf surfaces of the accessions were made using the method of Metcalfe and Chalk (1988). The abaxial and adaxial surfaces of the leaves surfaces were carefully separated by using dissecting needle and forceps after being rinsed in tap water. Alternatively, the epidermal surfaces were sectioned with razor blade (free-hand section) and placed on microscope slides. The preparations were stained with 1% safranin and 50% glycerol or Formalin Acetic Acid (FAA) and observed under a light microscope (AbdulRahaman and Oladele, 2005).

Using 35 fields of view at X40 objective as quadrats, the number trichomes was noted to determine the frequency of the different trichome types and was expressed as percentage occurrence of such types based on all occurrences (Obiremi and Oladele, 2001). Terminologies for naming followed those of Esua (1977) and AbdulRahaman and Oladele (2005). The trichome densities were determined as the number of trichome per square millimeter (Stace, 1965). 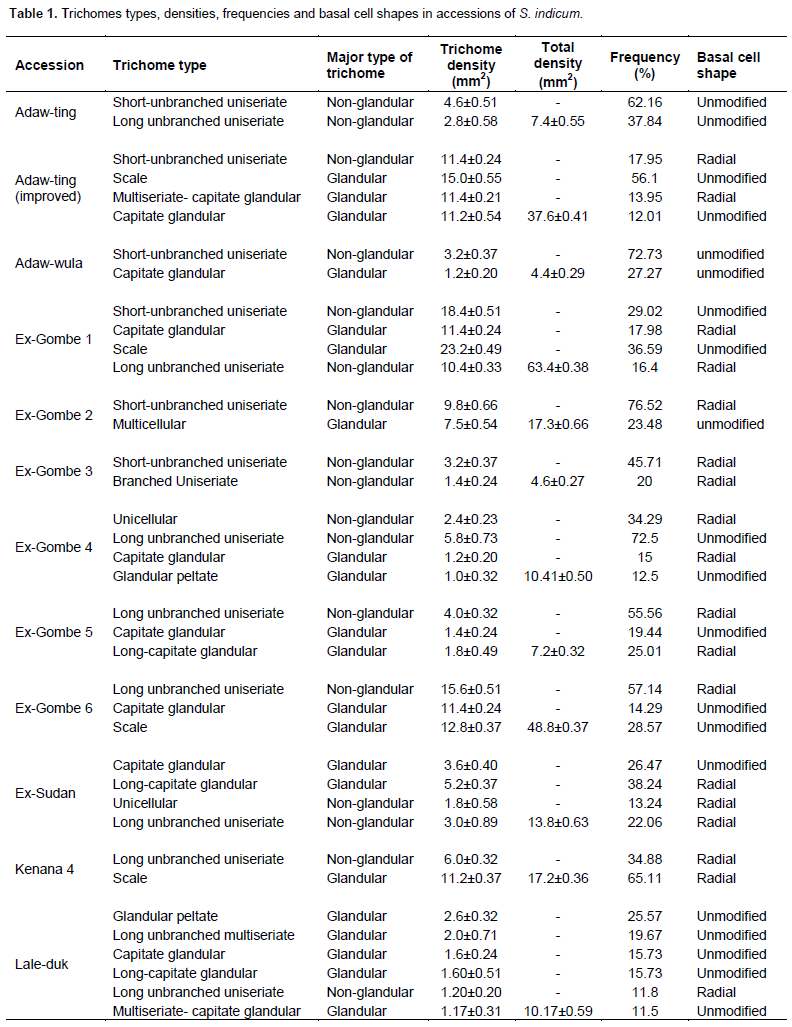 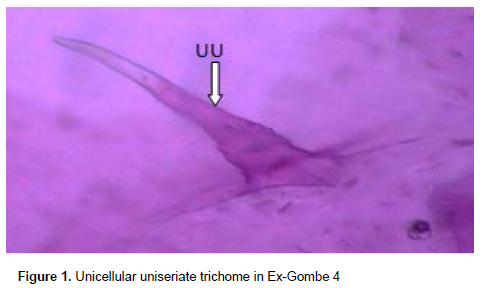 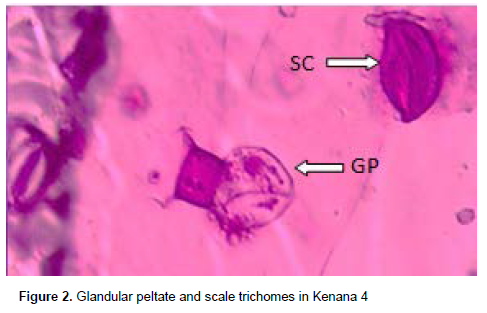 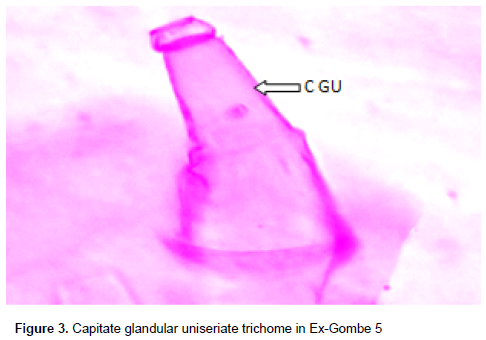 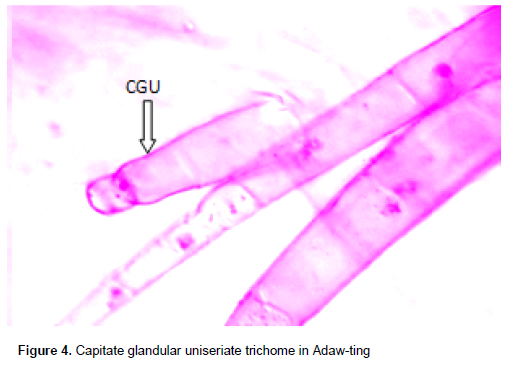 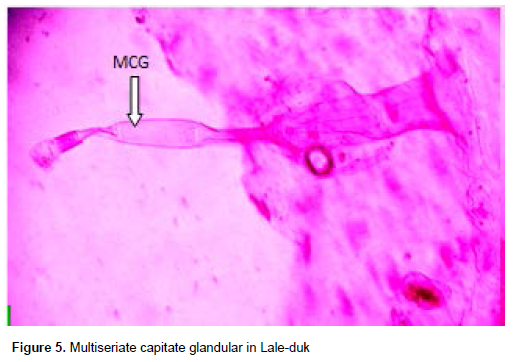 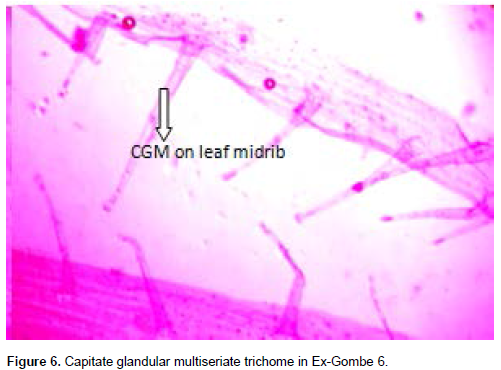 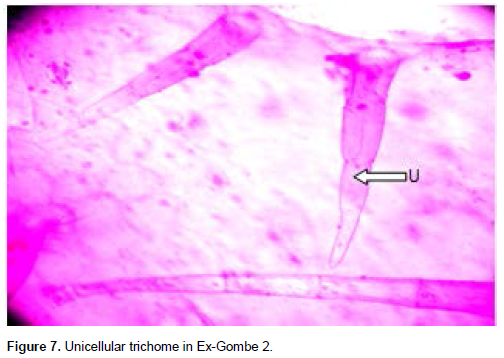 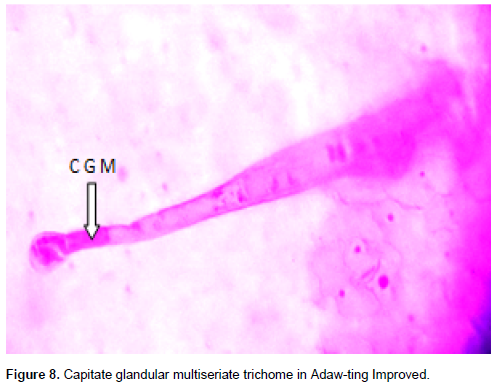 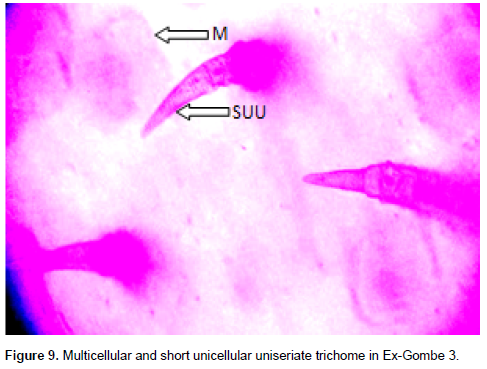 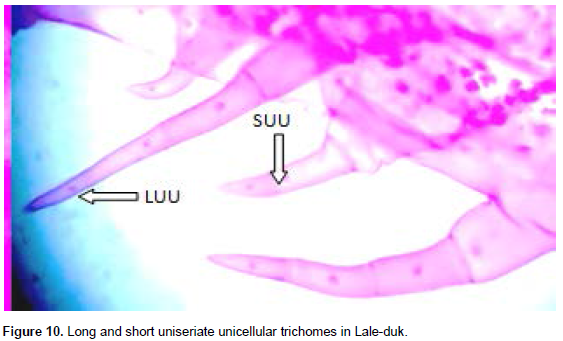 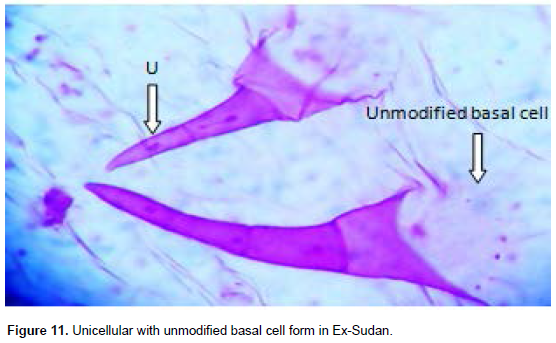 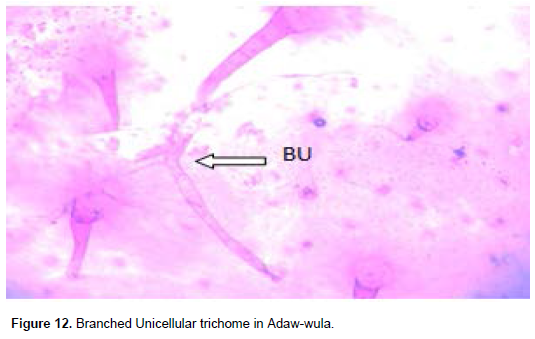 In all the trichome types, the most frequent are short unbranched uniseriate (76.52%) in Ex-Gombe 2, (72.73%) in Adaw-wula, they occur in six accessions and long unbranched uniseriate (72.5%) in Ex-Gombe 4, they occur in seven accessions. The lowest frequency was multiseriate capitate glandular (11.5%) observed in Lale-duk (Table 1). This information is meaningful from an ecological perspective because it can help us better understand what role these trichomes may have in the plant's ecology, and may lead to a better understanding of natural plant protection.

The density of trichomes varied from accession to accession. Trichome density (Table 1) is higher in Ex-Gombe 3 (63.4±0.38 mm2) and the lowest was recorded by Ex-Gombe 4 (4.4±0.29 mm2). The trichomes identified were also classified into two types based on their basal cell forms, namely, unmodified (Figure 12) and radial basal cells (Table 1). The former occurred in accessions Adaw-ting, Adaw-ting (improved), Adaw-wula, Lale-duk and Ex-Gombe 5 while the latter occur in Ex-Gombe 1, ex-Gombe 2, Ex-Gombe 3, Ex-Gombe 4, Ex-Gombe 6, Ex-Sudan and Kenana 4.

Trichomes are specialized hairs found on the surface of vascular plants and glandular trichomes in particular are responsible for a significant portion of a plant’s secondary chemistry. Besides metabolically inactive or so-called non-glandular trichomes, biosynthetically active glandular trichomes also exist in S. indicum (Table 1). They sequester or store plant metabolites that are often characteristic for specific taxonomic groups e.g. monoterpenes in Lamiaceae, sesquiterpene lactones in Asteraceae. Glandular trichomes have in common the capacity to produce, store and secrete large amounts of different classes of secondary metabolites (Fahn, 2000; Schilmiller et al., 2008). Many of the specialized metabolites that can be found in glandular trichomes have become commercially important as natural pesticides, but also have been found to be used as food additives or pharmaceuticals (Duke et al., 2000; Aharoni et al., 2006). For instance, plants of the Lamiaceae, comprising species such as Mint (Mentha × piperita), Basil (Ocimum basilicum), Lavender (Lavandula spica), Oregano (Origanum vulgare) and Thyme (Thymus vulgaris), are cultivated for their glandular trichome-produced essential oils (Schilmiller et al., 2008). Moreover, artemisinin, a sesquiterpene lactone that is produced in the glandular trichomes of annual wormwood (Artemisia annua), is used for the treatment of malaria (Weather et al., 2011). In addition, gossypol and related compounds, which are dimeric disesquiterpenes produced by cotton (Gossypium hirsutum) trichomes, have strong antifungal activity (Mellon et al., 2012) and are potential natural pesticides Dayan and Duke (2003). It is for these kinds of specialized metabolic properties, and for the opportunities to modify these properties via genetic engineering (Lange et al., 2011), that trichomes have received increased attention over the past years (Tissier, 2012).  According to Aschenbrenner et al. (2013), glandular trichomes secrete substances characteristics of a species, including essential oils, gums, mucilages or resins.

Essiett et al. (2012) reported that trichome features can be reasonably employed for the delimitation of plant species. Also Ogundipe and Pereira-sheteolu (2006) reported that the presence and types of trichomes are useful diagnostic features in the Pedaliaceae family. Thus, the non-glandular trichomes observed in accessions Adaw-ting and Ex-Gombe 3 dinguished them from other accessions which recorded glandular trichomes (Table 1). The basal cell shape of the trichomes also is good systematic evidence in the diagnosis of these accessions. Ex-gombe 3 and Kenana were observed to have radial basal cells, whereas Adaw-ting had unmodified basal shape. The basal cell shapes were heterogeneous in the rest of the accessions.

Apart from the taxonomic and pharmaceutical significance of trichomes, leaf trichomes contribute to plant resistance against herbivory (Dalin et al., 2008; Gopfert et al., 2010; Aschenbrenner et al., 2013). The hairs generally are thought to help keep the leaf cool and also prevent rapid wind current from passing close to the surface and thus removing water vapour from transpiring areas thereby reducing the rate of transpiration (Fahn, 1990). The number of trichomes produced and trichome density vary genetically within several species (Dalin et al., 2008); but in most empirical studies, the abundance and effectiveness of natural enemies were found to be negatively correlated with the density of plant trichomes (Lovinger et al., 2000; Fordyce and Agrawal, 2001; Stavrinides and Skirvin, 2003; Mulatu et al., 2006; Olson and Andow, 2006). Thus, Ex-Gombe 3 which recorded high trichome density could be drought-tolerant accession because Abdulraham and Oladele (2004) reported that plants with high trichome density have high capacity to conserve water.

It is suggested based on this study that sesame trichomes in general and glandular trichomes in particular should be harvested and the bioactive compounds be identified and isolated as these trichomes may be of potential chemical factories for pharmaceutical, flavour, fragrance, pesticide and insecticide industries. This is because Covello (2008), Weathers et al. (2011) and Alain (2012) stated that secretions of glandular trichomes have been used for their medicinal properties, and in some cases active ingredients have been marketed as drugs. Artemisinin is as esquiterpene lactone produced in glandular trichomes of A. annua are used for the treatment of malaria as an alternative to quinine drugs, which face increasing resistance from emerging strains of the malaria parasite. Pharmaceutical companies have developed derivatives of artemisinin (artemeter, artesunate) which are now widely marketed (Shanks, 2006).

Authors declare that there are none.