Cigarette use is the most preventable cause of death worldwide and is accountable for the deaths of approximately half of its long-term users. Cigarette use killed 100 million people in the 20th century and will kill 1 billion people in the 21st century if existing trends continue. In 2011, cigarette consumption killed more than 6 million people, nearly 80% in low and middle income countries (Eriksen et al., 2013). On the average cigarette smokers lose about 15 years of their life (WHO, 2008). According to WHO estimates approximately 47% of men and 12% of women smoke cigarettes worldwide in 2010 (Tobacco free initiative, 2010). Studies revealed that national smoking prevalence among men in sub- Sahara Africa varies from 20 to 60% and the yearly cigarette consumption rates are on the rise for both men and women (Warren et al., 2000-2007). Cigarette smoking is well known as a risk factor for many of health problems such as lung cancer, cardiovascular diseases, intrauterine growth retardation, spontaneous abortion, antepartum hemorrahage, female infertility, peptic ulcer disease, chronic obstructive lung disease, sexual dysfunction in men, and so on. Passive smokers can also get diseases associated with cigarette smoking (Kassay et al., 1994; Wong and Bauman, 1997; Guslandi et al., 1997; Jee et al., 1999).

There is also suggestion that smoking is associated with negative effects on quality of life in populations with psychiatric conditions. In a survey of 1843 psychiatric patients, subjects with nicotine dependence (n=280,16.6%) were more likely to have a lower social status, experience more general health problems, have a higher rate of hospitalizations, and have poorer treatment compliance than subjects without nicotine dependence (Montoya et al., 2005).

The sample size was determined using single population proportion formula with the assumption of 95% confidence level, 5% marginal error, 10% non-response rate and the proportion of cigarette smoking to be 50%. The weekly patient load in the outpatient department of psychiatry clinic was 250. Therefore, to get the sample size of 385; we needed to collect the data for the duration of two weeks consecutively. All patients who met the inclusion criteria coming to JUSH psychiatry clinic during the data collection period were included. All eligible adult attendees of the psychiatric clinic at JUSH during the study period were invited consecutively to participate in the study.

An interviewer administered questionnaire was used to collect data. The questionnaire consisted of items measuring cigarrete smoking, alcohol use, pattern and frequency of khat use, mental disorder and sociodemographic variables. In our study, cigarette smoking was defined as having smoked cigarettes at least once in the last one month preceding the study. The WHO’s Alcohol Use Disorder Identification Test (AUDIT) was used to measure alcohol use disorders (AUDs) (Babor TF et al., 2001). A study participant who had eight or more scores on the AUDIT was classified as having an alchol use disorder (AUD).

Data were collected by interviewing all persons with mental disorders coming for treatment to JUSH and the patients’ diagnosis was extracted from medical charts. Five diploma level psychiatric nurses and five master’s level postgraduate students in mental health collected data. Two supervisors who had bachelor degree in public health and the principal investigator also participated in the supervision. Before the data collection, a two days training was given for the data collectors and one day training for the supervisors.

Ethical clearance and permission was obtained from the Ethical Review Committee of Jimma University, College of Public Health and Medical Sciences. The study participants were free to enroll in the study and withdraw from it at any time. Data were collected from participants after getting informed consents. All the information obtained in due time were kept confidentially. Patients with cigarette smoking were referred to mental health professional specialists and psychologists for further evaluation and management. 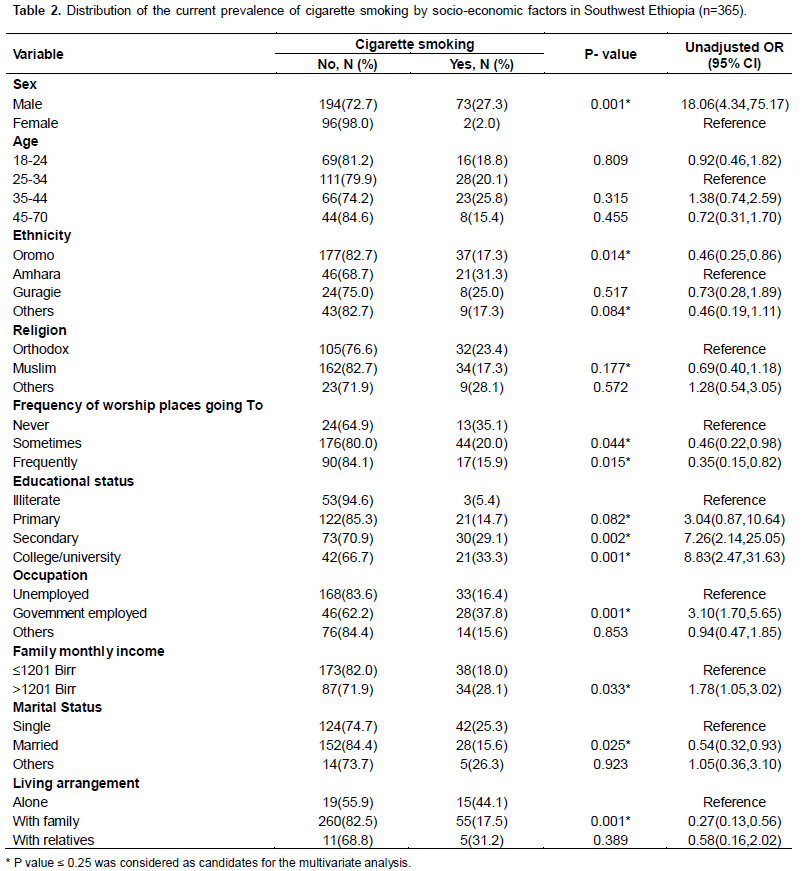 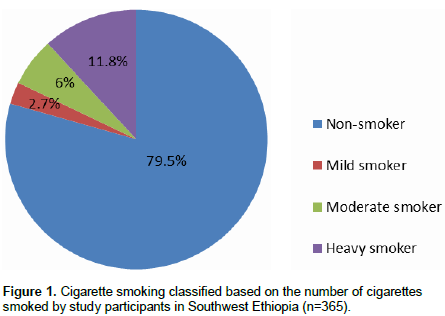 In the bivariate analysis, being male, increased frequency of going to worship place, increased educational status, being a government employee, being single, and living alone, khat use, using shisha, family history of alcoholism, schizophrenia, alcohol use disorders and family monthly income of 1201 ETB and higher were strongly and positively associated with current cigarette smoking. However, some of the following variables such as ethnicity, religion, bipolar I disorders, anxiety disorders, other psychiatric disorders, family history of mental illness and age were not significantly associated with current cigarette smoking (Table 3). 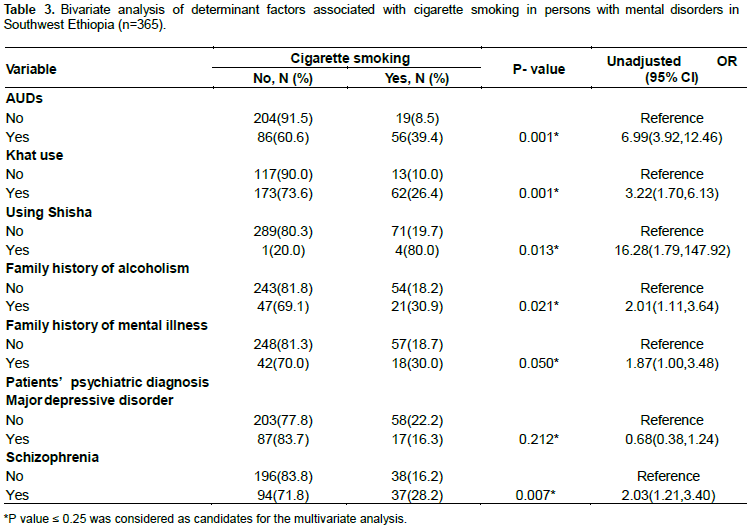 On the other hand, the multivariate logistic regression indicated that being male, khat use and experiencing alcohol use disorders were found to be significantly associated with current cigarette smoking (Table 4).

This study revealed that there is substantial burden of cigarette smoking in persons with mental disorders in Jimma University specialized hospital. The overall current prevalence of cigarette smoking in persons with mental health disorders in Jimma University specialized hospital was 20.5% which is in agreement with the study done among Dilla University students in which 19.17% of students were found to be cigarette smokers (Tadesse, 2014). However, the prevalence is higher as compared to that reported in studies carried out among the students of Aksum University (Gebreslassie et al., 2013), Hawassa University in Ethiopia (Kassa and Deyno, 2014) and in school adolescents in Nigeria (Raji et al., 2013) which revealed 9.3, 7.5 and 8.3% prevalence respectively. These findings were significantly lower than a similar study done in Australia, Timor and Mekelle, in which the current prevalence were 66.6, 40.3 and 29.5% respectively (Cooper et al., 2012; Siziya et al., 2008; Eticha and Kidane, 2014). Our findings were also lower than a similar study done in Spain, Tanzania and Yemen where the prevalence rate of cigarette smoking was 54.54, 38.6 and 24.3% respectively (Bobes et al., 2010;  Hauli et al., 2011;  Abbas et al., 2014). The possible explanation for the observed differences in cigarette smoking could be due to mental disorders condition, for instance, persons with mental disorders being less likely to smoke cigarettes because they felt ill or they thought that cigarette smoking may have a negative impact on the potency of the psychotropic medications. Another possible reason for the lower reported prevalence could be higher recall bias in our study. Furthermore; this difference may have arisen due to the difference in study setting, study population and sample size.

In the present study, the frequency of cigarette smoking in males was higher than females (27.3 Vs. 2.0%). This may be due to the high cultural restrictions in females. Our findings indicated that the prevalence of cigarette smoking in schizophrenia, bipolar I disorders and major depressive disorders were (28.2, 17.8 and 16.3%) respectively which is contrary to the study finding in Australia schizophrenia (70%), bipolar disorder (61%) and depressive disorder (58%) (Cooper et al., 2012). This may be explained by the difference in cultural setting and socio-economic characteristics of the patients. In addition, the actual prevalence of smoking might have been underreported due to social desirability bias.

This study had some limitations; first, the study used a descriptive cross-sectional design that cannot establish trends and causality between cigarette smoking and potential risk factors. There may be under reporting of cigarette smoking due to social desirability bias.

The authors are grateful to all study participants for giving their time to participate in our study. Their appreciation is also extended to Jimma University for funding the project.