Silibinin (Silybin) as an active constituent derived from milk thistle (Silybum marianum) has been shown to have antioxidant and anti-apoptotic properties. In traditional system of medicine, Silybum marianum has been used for treating various kinds of ailments including liver disease and cancer; however, clinical studies are largely heterogeneous and contradictory. The present study was designed to investigate whether Silibinin protects neuronal injury against middle cerebral artery occlusion induced oxidative stress associated damages in focal cerebral ischemia in Wistar rats. Rats weighing 250 to 300 g were pretreated with Silibinin 100 mg/kg and 200 mg/kg body weight, suspended in 0.5% of gum acacia) once daily for seven days. On 8th day, they underwent for middle cerebral artery 2 h suture occlusion by nylon suture. After 120 min of middle cerebral artery occlusion (MCAO) and 22 h of reperfusion, behavioral tests were assessed in terms of neurological deficits. Animals were sacrificed and infarct volume in Triphenyltetrazolium chloride (TTC) stained brain sections was measured. Further, various oxidative biomarkers were estimated in brain homogenates of rats. Pretreatment with Silibinin at doses of 100 and 200 mg/kg significantly improved the neurobehavioural alterations and reduced the infarct volume whereas 200 mg/kg Silibinin significantly increases the Glutathione (GSH) level and the others parameters with respect to control values. These results clearly indicate the neuroprotective effect of Silibinin against middle cerebral artery occlusion associated with oxidative damage induced brain injury due to its antioxidant and anti-apoptotic property.
Key words: Neuroprotective, MCAO, Silibinin, oxidative stress, infarct volume, cerebral ischemia.

Ischemic stroke and neuronal death is the second major cause of death worldwide (Van derWorp and van Gijn, 2007). Cerebral ischemia produces oxygen and glucose deficiency due  to  reduction  and  complete  blockade  of blood that flows to regions of brain (Zemke et al., 2004). This occlusion, thus damaging physiological activity of brain leads to oxidative stress and further neuronal damage.  Ischemic reperfusion injury can causes cellular damage by cascade of events such as release of free radicals and cytokines, induction of inflammation, apoptosis, and excitotoxicity that affect structure and function of brain (Kuroda and Siesjo, 1997). It has suggested that oxidative stress, excitotoxicity, inflammation and apoptosis are the major mechanisms that should be involved in the pathogenesis of ischemia/reperfusion injury (Bondy 1995; Lipton 1999). The ischemic mediated neuronal damage might be a result of mitochondrial dysfunctioning of resident cell that disrupts the organized redox balance, and therefore initializing the cascade of damaging events which supports the necrotic and apoptotic cell death pathway (Takemura et al., 1993; Courtois et al., 1998). It has been evidently concluded that oxidative stress is the major mechanism of brain damage in occlusion and reperfusion. That’s why it has been concluded that occlusion of middle cerebral artery (MCA) by using nylon suture is a widely suggested experimental model of cerebral ischemia for neuroprotective drug development as it closely resembles stroke injury seen in human patients (Carmichael, 2005; Durukan and Tatlisumak, 2007).

Chain (2001) evidently concluded that oxidative stress is the major mechanism of brain damage in occlusion and reperfusion. In recent years, herbal medicines has been gaining much interest, as these appears to be safe and effective treatment for combating neurodegenerative diseases associated with oxidative damage. It has been reported that the formulations and plant extracts which have antioxidant properties, protect the neurons against ischemic and reperfusion injury (Zhu et al., 2004; Shukla et al., 2006). Among herbal medicines, Silibinin categorized under the group of flavonlignans, that is extracted from milk thistle plant Silybum marianum. Silibinin is a potent hepatoprotective used every day in clinical practice for treating liver disorders; it could prevent lipid peroxidation, and also increase antioxidative enzyme levels. It has already been shown at the neuroprotective effect of Silibinin in diabetic mice by Tota et al. (2011).

Effect of Silibinin on percent survival of animals after MCAO
After MCAO for 120 min and 22 h reperfusion, approx 50% of animals survived in the vehicle treated group. Pretreatment with Silibinin at 100 and 200 mg/kg increased the survival rate significantly to 66.6 and 83.3% respectively. There was no mortality in sham operated rats treated with vehicle (Table 1).

Effect of Silibinin on neurological deficit
The spontaneous motor activity showed no neurological deficits in sham operated rats, while in MCAO group followed by reperfusion for 22 h caused marked change in the behavior of the animals. In spontaneous motor activity test, MCAO animals spend most of the time in the center of the cage with posture curved toward the paretic side. The animals in the vehicle treated group subjected to ischemic reperfusion injury exhibited severe neuro-logical deficit (score: 2.83±0.30), and showed circling towards the contralateral side and had a reduced mobility when compared to the sham operated animals. The rats in the Silibinin 100 and 200 mg/kg treated animals subjected to MCAO showed significant (p < 0.05) improvement in the behavior when compared to the ischemic rats (score: 1.66±0.21 and 1.16±0.30 respectively) (Table 2). 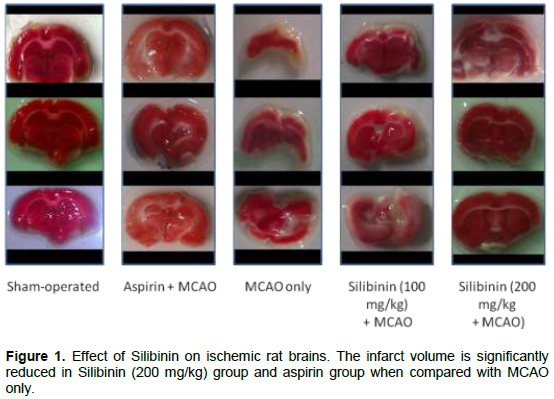 In the present study critically evaluated the most abundant naturally occurring flavonoid Silibinin isolated from S. marianum as a potential new prophylactic anti-oxidative and anti-apoptotic target in cerebral stroke. MCAO is a classical and well-characterized experimental model of cerebral ischemia. The cytotoxic response occurs within minutes after the onset of cerebral ischemia, which then encompasses proinflammatory response, apoptosis, oxidative stress and neurological damage. Characteristically, ischemic/reperfusion induced brain injury is associated with biochemical, behavioral and histopathological alterations which is seen to be well ameliorated with the pretreatment of Silibinin.
Herein, the study observed that Silibinin prevents cerebral ischemia/reperfusion injury by ameliorating oxidative damage. The development of pathogenesis of cerebral ischemia, which is associated with an increased production of free radicals, specifically hydroxyl radical, superoxide, higher lipid peroxidation and lower enzymatic antioxidant defenses (Halliwell 1992; Dringen et al., 2000). The above damages can be prevented by detoxification of free radicals. Beneficial effects of various antioxidants and free radical scavengers in ischemic investigate the pathology of cerebral ischemia. However, the success behind these models lies only when they can reproduce the end results. Silibinin at dose of 200 mg/kg BW treatment (p.o.) showed significant reduction in brain infarct volume in MCAO induced focal cerebral ischemia model of stroke in rats; and improves brain impairment due to its antioxidant effect. Silibinin at dose of 100 mg/kg also decreases oxidative stress induced lipid peroxidation reaction and increased glutathione peroxidase with increased activity of SOD.