A 78-year-old man was referred to our department with severe low back pain and gait disturbance. Lumbar magnetic resonance imaging (MRI) showed a large, well-circumscribed mass isointense with cerebrospinal fluid on T1- and T2-weighted imaging at the conus level. Arachnoid cyst without performing contrast-enhanced MRI was initially diagnosed. Intraoperative observation and postoperative histopathological examination revealed totally cystic schwannoma. Contrast-enhanced MRI is very important for the diagnosis of this rare tumor and should have been performed in this case.

A schwannoma is a benign tumor arising from a Schwann cell and occurring mainly in nerve sheaths of the intradural extramedullary region. It usually causes radiating pain as a result of dorsal funiculus compression, or they induce numbness or motor weakness in the area of nerve innervation. Although cystic changes in schwannomas have been well described, most spinal schwannomas are solid or heterogeneous solid tumors, and totally cystic schwannoma is very rare. Schwannoma contains the Antoni A and B portion, the degeneration of the latter is thought as one reason of cyst formation. Differential diagnosis of cystic intradural extramedullary lesions is very important, because cystic schwannoma is potentially curable. The current report describes a case of totally cystic schwannoma in the cauda equina that was misdiagnosed as arachnoid cyst preoperatively.

A 78-year-old man was referred from the plastic surgery department to our department with chief complaints of severe low back pain and difficulty in walking. He had a history of cerebral palsy, lumbar canal stenosis, and cervical canal stenosis. Both canal stenoses had been treated surgically about 25 and 15 years earlier, respectively, in another hospital and he remained able to walk unaided until about 2 years prior to this presentation.
Because of progressive deterioration of walking ability over the next 2 years, he became almost bedridden and developed sacral decubitus ulcer. Although he underwent successful treatment of the ulcer by plastic surgeons, and could not sit, because of exacerbated low back pain in a bending position. Manual muscle testing (MMT) yielded scores of 2 for both quadriceps and hamstrings, and 1 below both tibialis anterior muscles. Numbness was present on the dorsal aspects of both lower extremities. Complete urinary retention also appeared.
Lumbar magnetic resonance imaging (MRI) showed a 14×19×62 mm intradural extramedullary mass at the conus level with isointensity on T1-weighted imaging and hyperintensity on T2-weighted imaging (Figure 1). Because the lesion appeared to be circumscribed by tissue at the same intensity as cerebrospinal fluid and the patient  had  a  history  of  lumbar  surgery, and  this  was diagnosed as arachnoid cyst. This was why contrast-enhanced MRI was not performed. The spinal cord was severely compressed and bent by the mass at the epi-conus level, so he demonstrated epi-conus syndrome. 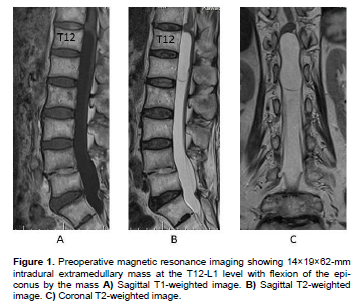 Fenestration of the mass was initially planned. Under general anesthesia, the patient was placed in a prone position and T11-L1 laminectomy was performed. After opening the dura and arachnoid, no arachnoid cyst was present. Instead, at the left ventral side from the conus to the cauda equina, cystic tumor was found. The cystic wall was well demarcated.
Cutting the wall, yellowish fluid was released. The proximal and distal nerve root generating the tumor was observed. After cauterizing and cutting, total tumor resection was achieved (Figure 2). The postoperative histopathological diagnosis was schwannoma (World Health Organization Grade 1) (Figure 3). Postoperative MRI demonstrated total removal of the tumor and improvement of preoperative spinal cord flexion (Figure 4). 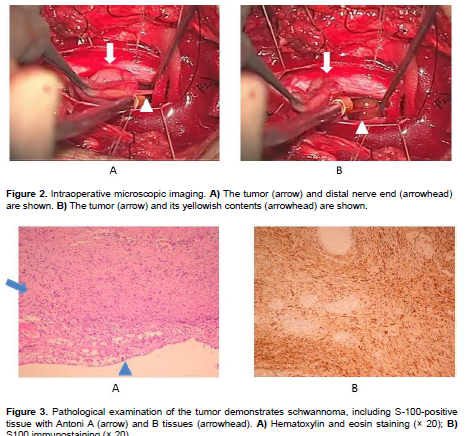 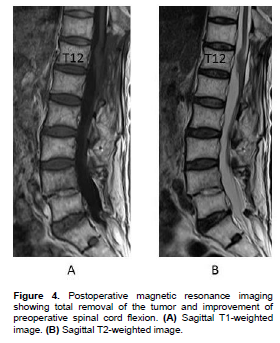 Immediately after the operation, low back pain disappeared. Two days after surgery, the patient was able to urinate by himself. However, moderate paraplegia remained, and he could not walk without assistance despite the five months period of rehabilitation.

Spinal schwannomas account for approximately 30% of primary spinal tumors and are benign tumors of the Schwann cells, as nerve sheath cells (Seppala et al., 1995). The lumbar region is one of the most common sites for spinal schwannoma, but totally cystic schwannomas in the lumbar spine is rarely documented (Kasliwal et al., 2008; Parmar et al., 2001; Wu et al., 2013).  Wu  et  al. (2013) reviewed 11 previously reported cases of totally cystic schwannoma, including two of their own cases. Intensity of cysts on T1- and T2-weighted imaging varied, reflecting the cyst contents, but all cysts showed good ring-like enhancement of the walls. In our case, cyst contents were yellowish but almost transparent. This was why intensity on T1- and T2-weighted imaging was similar to that of cerebrospinal fluid.
Several theories have been suggested regarding cyst formation. One is the degeneration of the Antoni B tissue of the schwannoma and another is central ischemic necrosis after lesion growth. However, the prognosis and treatment for cystic schwannomas are thought to be similar to those of solid schwannoma. In the present case, the tumor seemed to have arisen from one of the sacral nerves, and no fresh sensory or motor deficits appeared after total excision of the tumor.
Intradural arachnoid cysts are commonly located in the middle of the lower thoracic spinal cord and lie mostly dorsal to the spinal cord. Kumar et al. (2011) reviewed their 31 surgical cases of spinal arachnoid cyst. In the literature, T1 and T2 weighted MRI images were shown for diagnosis, but there was no description about contrast-enhanced MRI. Also, they mentioned that the only method of achieving a definitive diagnosis of cystic lesions is through biopsy. A rare case of progressively enlarging arachnoid cyst of the lumbosacral spine about 30 years after surgery on the lumbar spine was described by Hung-Kai Weng et al. (2013). According to them, MRI of the mass demonstrated abnormal enhancement on the expansile dural sac and in the thecal sac, reflecting arachnoiditis, which seemed to differ from the usual ring-like enhancement.
On the other hand, all totally cystic schwannomas previously reported showed a well-enhanced wall compared to other cystic lesion, such as perineural, Tarlov, neuroenteric, epidermoid, and bronchogenic cysts, cystic teratoma, and arachnoid cyst. Contrast-enhanced MRI thus appears very important for the diagnosis of this rare tumor, and should have been performed in this case. With the information from complete contrast-enhanced MRI, a precise preoperative diagnosis could have been made, in turn allowing accurate surgical planning and prediction of prognosis.

A rare case of totally cystic schwannoma in the cauda equine have been presented, which was misdiagnosed as arachnoid cyst preoperatively. Contrast-enhanced MRI should be performed to distinguish cystic schwannomas from other cystic lesions.