Journal of
Oceanography and Marine Science 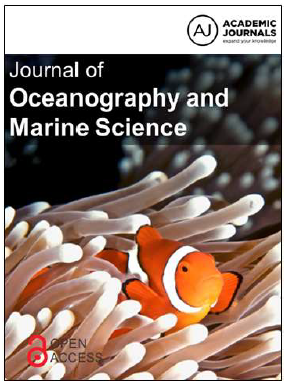 The sea surface temperature (SST) and partial pressure of carbon dioxide (pCO2) derived from hourly in situ measurements at Northwest (56.5°N, 52.6°W) and Northeast (49.0°N, 16.5°W) subpolar sites of the Atlantic Ocean from 2003 – 2005 were employed to investigate the seasonal pCO2–SST relationship. The results indicate weak to moderately strong significant negative relationships (r = -0.04 to -0.89, p<0.0001) and (r = -0.56 to -0.97, p<0.0001) between SST and pCO2 for the Northeast and Northwest observed data respectively. At the Northwestern site, the variation in surface water pCO2 might be partly controlled by the seasonal change in SST as well as biological activities and other physical processes. The variability in pCO2 distribution at the Northeastern oceanographic site were attributed principally to mixing and stratification processes during the autumn and spring seasons, while the pCO2–SST interrelationship obtained during summertime suggested that pCO2 variability could have been induced mainly by thermodynamic effects.

Carbon dioxide (CO2) dominance in the atmosphere (mainly from anthropogenic sources) over other greenhouse gases has resulted in increasing pCO2 in the surface ocean leading to measurably decreased pH (ocean acidification) (Canadell et al., 2007; Hopkins et al., 2010; Keeling and Whorf, 2005; Levine et al., 2008; Sabine and Feely, 2007). The world oceans are major natural sinks of atmospheric CO2. However, the North Atlantic Ocean is generally regarded as a primary gate for CO2 entering the global ocean due to its subpolar climate.
In the open ocean, it has been established that significant correlation exists between surface water pCO2 and sea surface temperature (SST). However, the sea surface pCO2–SST relationships are primarily governed by a combination of processes, such as biological activity, physical transport-upwelling of nutrients, and thermodynamics (e.g. temperature effects on CO2 dissociation and solubility) (Körtzinger et al., 2008a, b; Chen et al., 2007). Takahashi et al. (2002, 2009) have elucidated the mechanism and the role of thermodynamic effects on the uptake of CO2 by the global oceans. Recently, several studies have reported the low uptake of pCO2 in the North Atlantic Ocean suggesting a gradual weakening of an active carbon storehouse (Corbière et al., 2007; Omar and Olsen, 2006; Schuster and Watson, 2007; Schuster et al., 2009; Ullman et al., 2009).
The phenomenal CO2 low uptake is due to several factors including rising sea surface temperatures (Corbière et al., 2007), deep convection and re-stratification periods (Körtzinger et al., 2008a, b; Straneo, 2006) and variations in biological productivity (Behrenfeld et al., 2006; Lefèvre et al., 2004).
The role of temperature-controlled and biological processes in regulating ocean pCO2 have been intensively investigated and reported (Feely et al., 2002; Friederich et al., 2008; Körtzinger et al., 2008a; Takahashi et al., 1993; 2002; Watson et al., 1991). According to Shim et al. (2007), the temporal change in surface water temperature could be a major factor that drives a seasonal variation in surface pCO2. However, thermodynamic effect is caused by the dependence of CO2 solubility and dissociation constants on temperature (Rangama et al., 2005). Many global biogeochemical cycles (notably CO2 and CH4 cycles), mediated by biological processes are highly dependent on temperature. The solubility of CO2 and the dissociation of carbonic acid in seawater are moderated by temperature. It has been established that as temperature decreases the solubility of gases increases; this infers greater gas solubility for seawater in high latitudes. In this paper, observed data from two North Atlantic time series sites are employed in an attempt to assess the interseasonal sea surface temperature variations and anomalies at the eastern and western basins of the North Atlantic Ocean, and examine its effect on seasonal pCO2 distribution at these sites.
Description of mooring stations
The Porcupine Abyssal Plain (PAP) observatory (Figure 1), located in the Northeast Atlantic oceanographic region is a major long-term ocean observatory operated since 1989 for international and interdisciplinary scientific research and monitoring, which are focused on physical-biogeochemical observations. It is approximately 4800 m deep and is geographically positioned between the North Atlantic Current (NAC) and Azores Current (AC), and lies south of the main stream of the NAC, where it is subject to return flows from the West and Northwest. It is also characterized by significant presence of mesoscale eddies and deep winter mixing with strong interannual variability between 300 and 800 m (Longhurst, 2007). On the other hand, the K1 Central Labrador Sea (K1 CELAS) mooring site (Figure 1) is a deep-water formation oceanographic site of research importance that examines complex oceanic processes from surface waters to the seafloor by recording biological, chemical and physical parameters, as well as investigations of trends and variability in deep convection activity (Avsic et al., 2006).

Detailed sampling and analytical procedures for SST and pCO2 data generation at the KI CELAS and PAP observatories have been reported previously (Körtzinger et al., 2008a, b). These involved measurements of pCO2 with an autonomous sensor (SAMI-CO2, Sunburst Sensors LLC, Missoula, Montana, United States), while temperature measurements were carried out with an SBE-37 MicroCAT recorder (Sea-Bird Electronics Inc., Bellevue, Washington, United States). The data used in this study were obtained during three consecutive deployments between July 2003 and July 2005 for the PAP and K1 CELAS mooring stations. Details of mooring coordinates, nominal depth of deployment of sensors used, sampling interval, deployment and recovery dates, parameters measured and the total number of observational data successfully recovered are presented in Tables 1 and 2.

This study has demonstrated that the surface water pCO2 distribution across the spatial gradients over a seasonal timescale at both the eastern (PAP) and western (K1 CELAS) basins of the subpolar North Atlantic Ocean is relatively consistent, however with distinct seasonal large variability. At the PAP site, consistent undersaturation of oceanic surface water was observed relative to the atmospheric CO2, while a similar trend occurred over the western area at the K1 CELAS location but with some degree of supersaturation between February and March 2005. On a seasonal timescale, the surface water pCO2 cycle is characteristically marked by minimum and maximum pCO2 distribution pattern for the summertime and wintertime respectively. It is obvious that the pCO2 distribution pattern in the NE PAP and NW CELAS sites of the subpolar North Atlantic were in antiphase to the temperature signal. Investigation of sea surface pCO2–SST correlations generally indicated moderate to strong but negative correlations between pCO2 and SST. Thus we conclude that the variation in surface ocean pCO2 may not be controlled by change in sea surface temperature only, but by biological activities and other physical processes. In the Northeastern basin, the variability in pCO2 distribution is primarily governed by other physical processes such as mixing and stratification during the autumn and springtime, while the pCO2–SST relationship obtained for summertime indicates that pCO2 variability is induced mainly by thermodynamic effects.

The EuroSITES Project data was used for this research, contributions of the principal investigator and other scientists involved in the PAP project are acknowledged. The first author is particularly thankful to Professors G. A. McKinley and Arne Körtzinger for technical guidance. The fellowship opportunity provided by the Fulbright Scholarship Program to the Department of Atmospheric, Space and Ocean Sciences, University of Wisconsin, Madison is acknowledged. The authors would like to thank anonymous reviewers for their comments and suggestions made to improve the original manuscript.