The present work aimed to investigate physiopathological changes associated with the ethanolic extract of the stem leaves of Phyllanthus amarus (EEt(OH) P.a. Exploratory tests are performed in vivo on Wistar albino rats. Analysis of the variation in body weight at the level of the batch having received, and the control group showed a slight weight drop 7 d after treatment. This variation is not significant (p>0.05). The means relative organ weights show that there were no significant changes between control and treated groups (P Ëƒ 0.05).   No obvious clinical signs (tremor, breathing rate, paralysis). Slightly greater differences were noted for WBC of the Control group and rats treaded with EEt(OH) P.a (5000 mg/kg b.w.) on day 14 after the administration. These differences were statistically significant (p<0.05). Similarly, the platelet count was slightly lower for the control rats compared to the rats treaded. The various biochemical parameters explored, Glucose, Bilirubin (BIL), Alanine  amino transferase (ALT), Aspartate amino transferase (AST), Total protein (TP), alkaline phosphatase (ALP), urea (URE), creatinine (CR), Total bilirubin (TBIL) and Indirect bilirubin (IBIL),  have informed us about the probable effects of the stem leaves of Phyllanthus amarus in the liver and kidney.  There was no significant differences (p>0.05) in glucose, total protein, urea, creatinine levels  between control and experiemental groups at 14 d. Total bilirubin (TBIL) and Indirect bilirubin (IBIL), however, were statistically significant (p<0.05). Other biochemical parameters such as ALT, AST, ALP show statistically insignificant difference (p>0.05) in test and control batch.

Plants have been the source of natural products used, since earliest times, in non-conventional medicine known as traditional medicine through communities worldwide. Today, medicinal plants have continued to play an important role in the primary health care for more than 80% of people living in poor communities in the developing countries (Bennett and Brown, 2000; Nath et al., 2011). During the last decades, the use of medicinal plants in therapeutics has increased substantially (Castro et al., 2009; Lee et al., 2012) due to the increasing interests for natural substances. Among medicinal plants used in traditional medicine, some have antioxidant property and are used rightly or wrongly to prevent premature aging. Although, the use of herbal medicine may be considered to be safe, some natural products are known to be toxic at high doses and others may have potential adverse effects after prolonged use. Many data concerning the safety of herbal medicine has been reported and frequently these reports are related to hepatotoxicity (Saad et al., 2006; Park et al., 2010) and nephrotoxicity (Cheng et al., 2006; Debelle et al., 2008). Hence, toxicological assessment of medicinal plants is required even if these plants have been used for centuries. P. amarus belongs to the family Euphorbiaceae It is used in traditional medicine for gastrointestinal, kidney, liver, menorrhagia and other conditions (Patel et al.,  2011). Due to the worldwide usage of P. amarus in traditional medicine, this study was carried out to assess the physiopathological changes associated with the ethanolic extract of the stem leaves of P. amarus in rats. The Beninese flora contains about three thousand species (Akoègninou et al., 2006), including P. amarus Schumach. and Thonn, a plant of the Magnoliophyta branch and the great family of Euphorbiaceae (APG, 2009). This plant has potential pharmacodynamic properties such as antidiabetic drugs (Evi et al., 2011; Kiran et al., 2011) anticonvulsant (Manikkoth et al., 2011), antileptospiral activity (Chandan et al., 2012 ), antimicrobial activity (Ushie et al., 2013; Saranraj et al., 2012; Oluwafemi et al., 2008), antinociceptive activity (Rajeshkumar et al., 2002) and anti-inflammatory activity (Adeolu et al., 2013; Kiemer et al., 2003). In this study, acute oral toxicity activity of ethanolic extracts of P. amarus Schumach. & Thonn. stem leaves was investigated because of limited information available on its toxicity, despite the widespread use of this medicinal plant.

Clinical signs observed
No obvious clinical signs (tremor, breathing rate, paralysis) were observed although quantitative assessments were no carried out.
Evolution of rat’s weight and their organs during toxicity test
Animals were observed during 14 days and their weight was taken regularly. Figure 1 shows evolution of the rats weight during two weeks observation. Analysis of the variation in body weight at the level of the batch that received (EEt(OH) P.a, and the control group showed a slight weight drop 7 days after treatment (Figure 1). This variation was not significant (p>0.05). The means relative organ weights show that there were no significant changes between control and treated groups (P Ëƒ 0.05) (Figure 2). At necropsy, no macroscopic change was observed in the internal organs in treated rats. 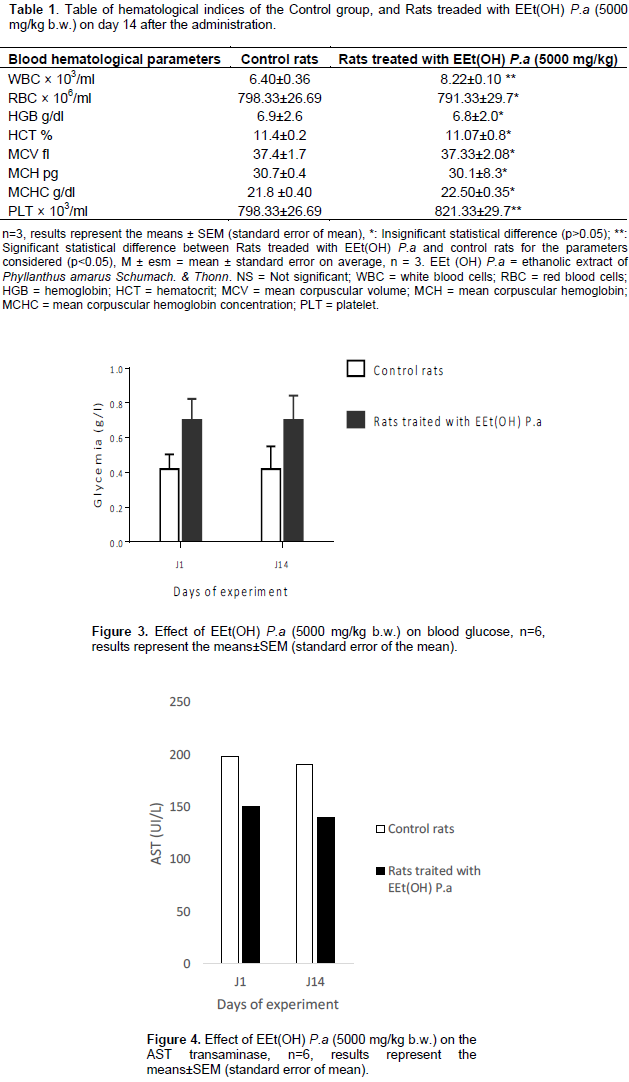 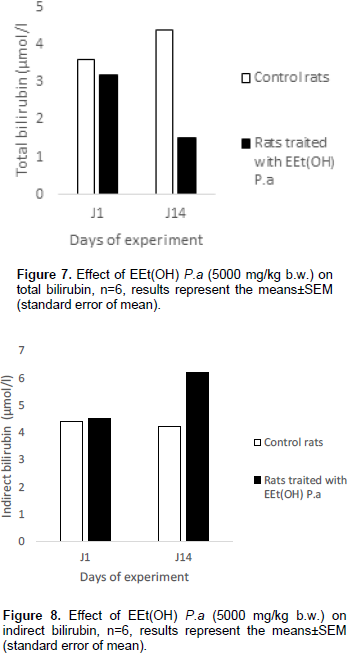 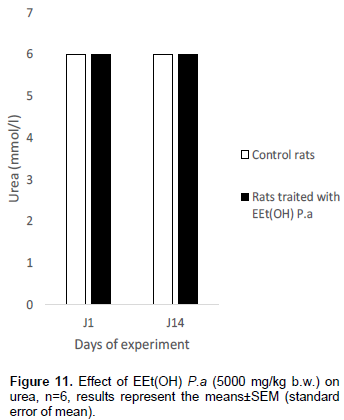 The ethanolic extract of the stem leaves of P. amarus Schumach. & Thonn. (EEt(OH)P.a) on this limited sample of animals did not have a toxic effect on the biochemical and hematological parameters studied at a dose of 5 000 mg/kg. b.w. The lethal dose is therefore over 5 000 mg/kg. b.w. Determination of the alanine aminotranferase content and aspartate aminotransferase content on the rats which received extract showed no variation when compared to the panel of control. Other studies such as histological examinations of the organs (liver and kidney) and chronic toxicity tests of P. amarus oral extracts deserve to be conducted in order to confirm its non-toxic character. Carrying out of the exploratory tests of cytotoxicity are imperative to determine any possible secondary effects.