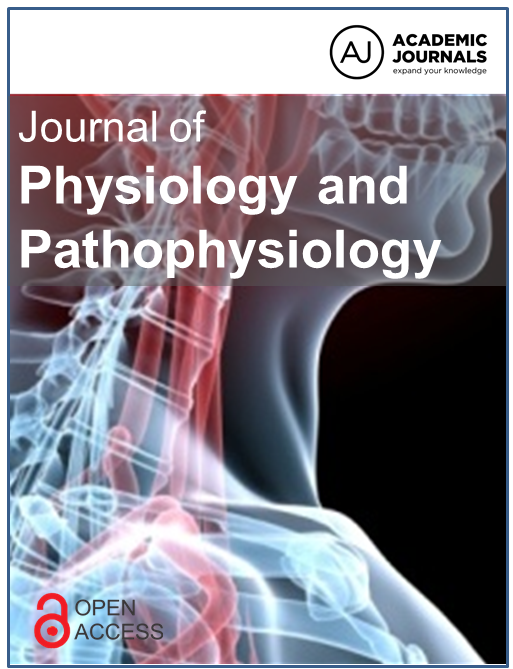 Oxytocin (OXT) is a neuropeptide with a peripheral role in reproduction, though it may have a central effect. The aim of the study is to verify its cental pathophysiological mechanisms on experimental rats. Rats were divided into control, OXT (which divided into intrathecal OXT and IV OXT subgroups), and antagonist group: OXT and l-glutamate Na+ subgroup with measuring of pain threshold, cardiovascular changes, and pain related mediators (OXT, serotonin, and dopamine) and histopathological examination. A significant increase of the pain threshold in rats was observed in intrathecal oxytocin subgroup. The response was absent in IV oxytocin subgroup The analgesic effect of OXT contributes to direct increase of OXT receptors maker in different brain areas and spinal cord and through glutamergic pathway. Besides, OXT induces significant increase in the levels of neurotransmitters related to the pain in serum and brain homogenate of this experimental study. Administration of OXT can counterbalance the pain troubles without major detectable detrimental effects on cardiovascular system.

Oxytocin (OXT) is a hormone synthesized in the paraventricular nucleus (PVN) and supraoptic nucleus (SON) to travel into two pathways (Balki et al, 2014). Either, from the posterior pituitary to the hypophyseal blood stream to enter the peripheral blood for its hormonal action, or OXT transported in axons and released in target brain areas (e.g., hippocampus, amygdala, striatum, hypothalamus, nucleus accumbens, and midbrain) (Moreno et al., 2013).

For many years, OXT was widely known for its peripheral role in milk letdown and uterine contractions (Baskerville and Douglas, 2010). However, great interest is taken nowadays concerned about the role of OXT in pain modulation, especially because it is a natural hormone and released normally under various conditions (Yang et al, 2011b) however, its analgesic action is debated. In this study, we clarified the analgesic role of oxytocin; hope to understand the mechanism of OXT in modulating pain process in experimental rats.

During all the experiments, the animals were treated in accordancewith the published rules for animal laboratory care, and the protocol has been approved by local Ethical Committee for Scientific Research at Faculty of Medicine, Assiut University, Egypt.

Twenty-four adult male Wister Albino rats, weighing (180 to 220 g), were housed in clean capacious cages (up to 4 per cage) in animal house of Faculty of Medicine, Assiut University. They were maintained on a natural 12:12-h light-dark cycle in an aerated room, temperature (25 ± 5°C), food (standard rat pellets) and water available ad libitum. The animals were habituated for handling and the testing environments for four days.

It was done individually in animals of all groups before and after administration of the analgesic measure. These tests include the following:

Tail-flick test: Each rat was placed in a restrainer and the distal third of its tail positioned unrestricted at the point of focus of a noxious radiant heat source (a focused projector bulb). The period from heat application to tail-flick until the animal withdraws the tail was recorded (Silva et al, 2013).

Hot plate test to noxious heat: Pain reflexes in response to a thermal stimulus were measured using Hot Plate Analgesia Meter (Model 30 socrel, Ugo Basile biological research apparatus, Comerio-Va-Italy). The hot plate surface was heated to a constant temperature of 55 ± 0.5°C (A temperature at which both A- and C-fibers are activated (Guyton, 2010), as measured by a built-in digital thermometer.

Animals were placed on the hot plate (30 cm in diameter), which was surrounded by a clear acrylic cage (25 cm tall, open top). The time until animal pain reflex appear (hindpaw lick) was measured (Adrianne et al,2013).

It was measured by ECG needle electrodes, which were inserted under skin of gently extended limbs of the supine animals. ECG was recorded at paper speed of 50 mm/s. (AD Instruments Pty Ltd, Castle Hill, Australia). Sensitivity was adjusted so as 1 mV causes 1 cm displacement of the baseline.

2 mL blood was collected from the retro-orbital venous plexus immediately before scarifying the animals. The whole blood incubated to clot for 30 min in clean screw-capped polypropylene tubes at room temperature and the serum separated by centrifugation at 3000 rpm for 10 min. The separated serum was aliquotted and stored frozen in Eppindorff's tubes at -20°C for assessment of the serum level of OXT, serotonin and dopamine by ELISA kits.

At the end of the experiment, animals were sacrificed by ether and perfused intracardialy with saline and 10% neutral buffered formalin. The brain and spinal cord were extracted from the skulls and vertebral column. They were mid-sagittally divided into two portions. The first portion was kept frozen at -20°C until use. Then this portion was weighed and placed in empty glass tubes per 1 g of tissue then homogenized with phosphate buffer in a motor-driven homogenizer. The homogenate was centrifuged at 2,800 g for 10 min at 4°C then the supernatant was placed in labeled vials and stored at -80°C for measurement of OXT, serotonin and dopamine by enzyme-linked immunosorbent assays (ELISA) with monoclonal antibodies against each substance according to manufacturer’s protocol.

The frontal cortex was dissected from the remaining portion of the brain (by coronal cut rostral to the corpus callosum) and the spinal cord, then the sections was used for immunohistochemistry to illustrates the presence of Chromogranin positive cells that indicates the presence of OXT receptors .

Statistical analysis was carried out using SPSS (version 20). Data were analyzed non-parametrically (due to the small number of animals in the groups and the cut-off time of latency performance). Data were expressed in mean ±SD. First, to compare the difference between pre-and post-values using the Wilcoxon Signed Ranks Test. Second, to compare the differences between the control and other groups, the Mann/Whitney U-test was used. The level of statistical significance was P <0.05 for all statistical evaluations.

In the experimental study, IV (OXT) subgroup showed a

highly significant (p<0.001) decrease in both ABP and HR but there were non-significant cardiovascular changes (p>0.05) noticed in subgroup (A) (Figure 2).

The immunohistochemical analysis of subgroup (A) reveled moderately increase in chromogranin A expression (particularly in the outer part of the molecular layer under the surface of the pia matter and in the most neurons of spinal cord) in comparison with the control group (Figure 3). 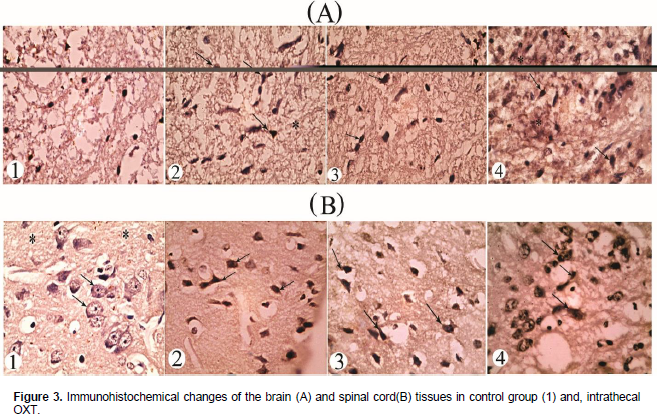 Whereas a large body of evidence exists to confirm OXT reproductive roles but its pain modulating effect, mechanism of action and its effect on the cardiovascular system is not clarified. In the present study, we hypothesized that intrathecal OXT could perform analgesic function. To test our hypothesis, experimental study was included. It was intended to clarify the analgesic role of OXT and its pathophysiological mechanism.

In the present study, the experimental study confirmed the analgesic effect of intrathecal OXT as it caused a significant increase in pain threshold. This goes with Condes-Lara et al. (2009) animal study, which suggested that OXT plays an important role in pain modulation and analgesia. Intrathecal OXT produces analgesia in both normal (Silva et al, 2013), neuropathic rats (Juif and Poisbeau, 2013) and in dogs with back pain (Huffmeijer et al, 2012)

Juif and Poisbeau, (2013) and Ayar et al (2014) described the pathophysiological mechanism of the analgesic effect of OXT. Juif and Poisbeau (2013) described that OXT stimulates the glutamatergic neurons in lamina II, which recruit GABAergic interneurons resulting in the enhancement of GABAergic and glycinergic spontaneous inhibitory transmissions (Ahmet et al, 2014) ending in presynaptic inhibition of C and Aδ fibers (Condes-Lara et al, 2009). This result goes with our finding of the partial blocking effect of pain relieve that recorded in subgroup (E) of rats. This study is the first study, which uses the intrathecal injection of l-glutamate sodium as a blocker to intrathecal OXT that indicate that oxytocin may exert some of its analgesic effect through acting on glutamate receptors. Previous studies done by Yang et al. (2011c) found that microinjection of L-glutamate sodium into the SON increases OXT concentrations in the SON perfusion liquid (increase OXT synthesis) and decreases the pain threshold measured by tail flick test.

Moreover, OXT exerts its analgesic effect indirectly through releasing of opiate peptides including leucine-enkephalin, methionine_enkephalin, and beta-endorphin in the periaqueductal gray (Todd, 2010). The present study is the first one proved the relationship between OXT hormone and other neurotransmitters (serotonin and dopamine) in modulating its analgesic action. The significant increase in brain homogenate serotonin level in OXT subgroup (A) of the present study is in agreement with previous animal studies which suggested that serotonergic and oxytocinergic neurotransmission interact anatomically and functionally (Scantamburlo et al, 2009; Montag et al, 2011; Silva et al, 2013). Yaksh et al. (2014) found that rats treated with oxytocin have an increased synthesis of 5-HT in the frontal cortex and brain stem. In addition, brain homogenate dopamine level was significantly increased which coincided with the study of Baskerville and Douglas (2010) who reported increase dopamine release in the ventral striatum and nucleus accumbens after oxytocin infusion in ventrotegmental dopaminergic neurons.

The immunohistochemical examination of OXT subgroup reveled a moderate increase in the expression of chromogranin A immunoreactivity on the molecular layer of the frontal cortex and most of sensory and motor neurons of the spinal cord. This indicates the presence of more oxytocin receptors than control group. This could add another pathophysiological mechanism of the analgesic effect of oxytocin. This goes with Schorscher- Petcu et al. (2010) and Wrobel et al. (2011) studies, which described the presence of specific OXTR located in pain controlling areas in the brain and spinal cord).

It was highly interestingly that intrathecal oxytocin administration showed non-significant changes in arterial blood pressure and heart rate in the experimental animals. This excludes the cardiovascular complications, which goes in line with the previous study of Yang et al. (2011b). However ABP and HR were significantly decreased after intravenous OXT administration and this coincided with the previous study of Yang et al.( 2014) which demonstrated that intravenous OXT promoted a direct negative inotropic and chronotropic effects in rats (Yaksh et al., 2014). OXT acts on specific oxytocin atrial cardiomyocytic receptors, stimulate the release of acetylcholine, decreasing the rate and force of cardiac contraction (Montag et al.,2011) and, stimulates the release of atrial natriuretic peptide (ANP) which causes bradycardia, naturesis and hypotension (Ahmed et al., 2014).

Intrathecal oxytocin is an effective analgesic measure, produce their analgesic effect through direct action on OXTR and stimulation of the release of some neurotransmitters as serotonin, dopamine. In addition, its intrathecal administration can modulate pain concept without major detectable detrimental effects on cardiovascular system.