The State Department of Housing in Kenya puts the housing demand in the country at 250,000 housing units per year, while actual supply is 50,000 units p.a. This demand for housing has accumulated to 1.85 million units as at 2018. This has led to the growing proliferation of slums and informal settlements, with the Department showing that there are over 500 such settlements. This state of affairs has been partly attributed to under-investment in low cost housing by both public and private entities. Stakeholders have therefore recommended the application of Public Private Partnerships (PPPs), which increases the role of the private entities in housing production beyond the traditional procurement method. Under PPPs, the public sector cedes the duty of actual housing development and concentrates on creating an enabling environment for the private party to effectively and efficiently perform the function of shelter provision. In addition to creating an enabling environment, the governments undertake monitoring, evaluation, creation of standards and enforcement. This study utilized secondary review of the literature on the evolution on PPPs and focused group discussion with selected officials at the State Department for Housing in Kenya. The purpose was to juxtapose the secondary literature review on how the concept of PPPs has been appreciated as an alternative to the traditional procurement methods.  It was found out that private participation in infrastructure development has evolved over time, assuming many forms like: contracting out, privatization and lately PPPs. Kenya has been applying PPPs since the liberalization of the economy in 1994, though there are were earlier applications of the concept. The country has used PPPs in the hard infrastructure sectors like energy and transport, but little success has been recorded in housing development. It was concluded that PPPs are applicable in down market urban housing in Kenya since the concept has been successfully applied in other areas. Through PPPs, a sector like down market urban housing can access more capital resources, technology, innovation, efficiency and effectiveness. The implication of this finding is that more down market urban housing can be developed to address the huge gap witnessed in Kenya.

The paper adopted secondary review  of  the  existing  literature  on  the evolution of PPPs and also used focused group discussion with officials of the State Department of Housing in Kenya. This was instrumental in looking into how the concept of private sector involvement in the development of infrastructure, including down market urban housing. A focused group discussion with 22 officials was done against the backdrop of the secondary data on how PPPs have evolved over time. This group explored the benefits, challenges and opportunities presented by the PPP mode of procurement in the country. A review of the Kenyan PPP legal and regulatory environment was also looked at alongside the global and local picture of the applicability of PPPs. This review showed that the country has joined the rest of the world in accepting done the applicability of PPPs in the development of infrastructure, including down market urban housing.

It was found out that 81% of the officials comprising the focused group discussion were aware of the benefits and opportunities brought about by PPPs. They observed that these could be extended to the construction of down market urban housing in Kenya. They observed that the State Department has attempted to use PPPs in the construction of civil servants housing schemes in Nairobi since 2013. The government has also committed to use PPPs in housing construction in the Vision 2030 and under the Big four agenda items (2017 to 2022). They noted that the application of PPPs has evolved in the country to a point where it is highly relied upon in other sectors of the economy, hence the same should be true for housing. The government has created an enabling environment for application of PPPs. This was started by the enacted the enactment of the PPP Policy, 2011, which established the grand vision of the state in utilization of PPPs. This gave room for the enactment of the PPP Act in 2013, which established key institutions like PPP unit, PPP committee of cabinet and the procedures for its application. It gave the developers and stakeholders clarity in applying PPPs and hence the confidence in the system. Kenya has since increased its uptake of PPP projects with  the  passage  of  these  laws and other regulations. This has largely been driven by the huge demands for infrastructure and socio-economic political development envisioned under Vision 2030 development blue print.
The PPP unit in Kenya data base shows that twenty-five PPP projects with a total investment commitment of US$ 9.3 billion attained a financial closure between the year 1990 and 2014. This is supported by the fact that currently; the country has 76 projects categorized as national priority which have been approved by the PPP committee established under the PPP Act, 2013. The projects will keep increasing as others attain the necessary approvals as per the Act and procedures, the majority of the projects so far lined are in transport, energy, education, housing and health (PPP unit Disclosure Portal, 2019). The illustration of projects under PPPs in various stages in Kenya is given in Table 1.
The growing evolution of the applicability of PPPs in the development of infrastructure, including down market urban housing in Kenya is evidenced by the fact that the 2018/2019 budget statement for Kenya, heavily proposed to utilize PPPs to deliver a variety of infrastructure. The country is desirous to use PPPs in the development of roads through the annuity programmes, Lamu coal power, Geothermal power in Menengai and the university hostels programmes in Kenyatta University, Embu, South Eastern, Moi among other projects under PPPs. The Ministry of Transport, Infrastructure, Housing and Urban Development is in the process of developing 10,000 housing units in Nairobi city county through PPPs, and some 4,500 police housing units through privately initiated PPP process. This shows that PPPs in down market urban housing too can benefit from this financing framework with some adjustments and structuring going forward (Republic of Kenya, 2018). This assertion was supported by focused group discussion which showed that 71% of the institutions in the Nairobi Metropolitan region (comprising of 5 counties surrounding Nairobi) was actively using PPPs to deliver a range of services. 90.5% of the members of  the  focused  group  discussion noted that PPPs is a critical concept for accelerating development going forward. 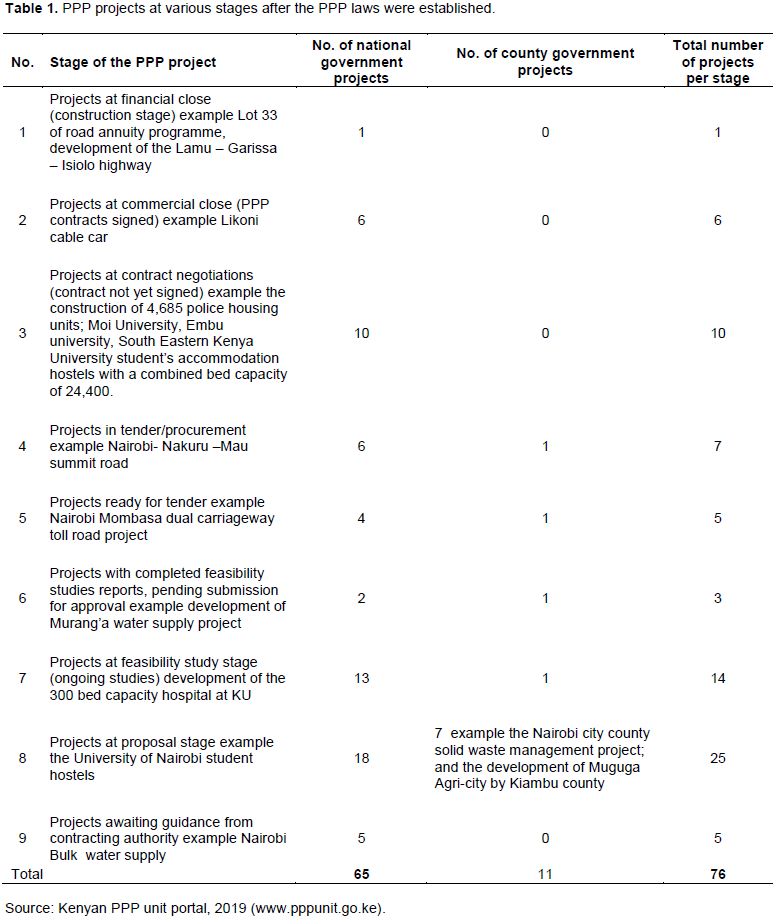 According to the PPP Unit of Kenya, the major models  which have evolved over time in the application of PPPs includes: Concessions, management contracts, land swaps, output based performance contracts, Build Own Operate and Transfer (BOOT), Build Operate and Transfer (BOT) or in some cases, models were  mixed  to achieve desired results. These models are backed by the PPP Act of Kenya, 2013 and are based on the sector and the specific needs of the contracting agencies. Concessions were found to be the oldest models of PPPs, which were more applicable in the roads and energy sectors of the economy.  The evolution of the applicability of PPPs has made the country to develop appropriate institutions to manage PPPs like the PPP unit based at the National Treasury, which acts as a technical advisor of contracting authorities, the PPP committee made of the cabinet members who approve PPP projects, the PPP nodes based in the contracting authorities, who prepare and submit PPP projects for consideration by the PPP unit and PPP committee (PPP Act, 2013). Kenya has made the right steps in the application of PPPs in down market urban housing though some steps needs to be taken for the concept to be more appropriate for the sector. The existing PPP laws may need to be amended to make them fit the sector, more housing regulations will need to be enacted to create housing funds, housing PPP guidelines and procurement of down market urban housing as a special good through PPPs.

According to the focused group discussion, the development of down market urban housing should use diversified models, or a mixture of such models. These include land swap, cooperative model or the joint venture approach to developing housing for low income urban households. They noted that Kenyan public institutions and the government have large tracts of land which can be used under a land swap deal to develop housing units. A developer can be allocated land on which to develop low income urban housing units in exchange for highly priced land in other areas through which they can recoup their investment. The government can also undertake a joint venture with well-financed private entity, where the public sector contributes land and the developer brings in capital and expertise for housing development. The well entrenched cooperative model can also be used where low income urban households can join hands to save some money, contribute labour and uptake of completed housing units. The government can undertake installation of housing infrastructure-sewer, water lines, access roads and electricity connection and part financing of the project to deliver down market urban housing. A private developer can be brought on board to undertake construction of the housing units. The developer should undertake this exercise while applying new technologies in housing development, efficiency, effectiveness and innovative housing designs and construction methods, possible under a PPP.

Participation of the private players in the development of infrastructure has been shown to have been preceded by such sectors which had the necessary resources. Engagement of the private sector in the development of infrastructure is an age old practice which has since evolved to cover many sectors of the economy. Private players in Kenya have the necessary qualifications and capabilities through which they can undertake the construction of down market urban housing, if well facilitated by  the  public  sector.  The  application  of   the targeted incentives, necessary legislation, enabling environment and setting of standards by the government as has been done since times immemorial. The enabling environment greatly motivates the private entities to partner with government in developing housing for low income urban households. The public sector should cede the role of actual provision of down market urban housing as it has been shown throughout history that it has performed poorly on this score. Public sector is best in setting standards, regulations, laws and monitoring the implementation and compliance, functions which it must be left with under a PPP framework.
The paper recommends the application of PPPs in down market urban development in Kenya, which has experienced huge backlogs, which cannot be addressed by public sector alone. Application of PPPs will bring about capital, technology, innovation, effectiveness, efficiency and economy in the production and development of housing units to cater for the low income urban households. The governments all over the world have huge unutilized assets like land and old estates, which can be redeveloped or new houses constructed on such invaluable assets. Compared to the traditional approaches of procurement where project activities are given out to contractors at each stage, PPPs bundle the services related in developing housing units into one and allocated such activities to a developer. This has the effect of invoking whole life cycle concept into projects. The developer will devise ways of making profits through savings, which becomes the single most motivation for innovation and efficiency in asset utilization and project development. Development and construction of housing units require the most up to date technologies and innovations in terms of capital mobilizations, design, construction, maintenance and operationalization attributes which can be realized through private sector working together with public entities in a well-structured PPP programme.